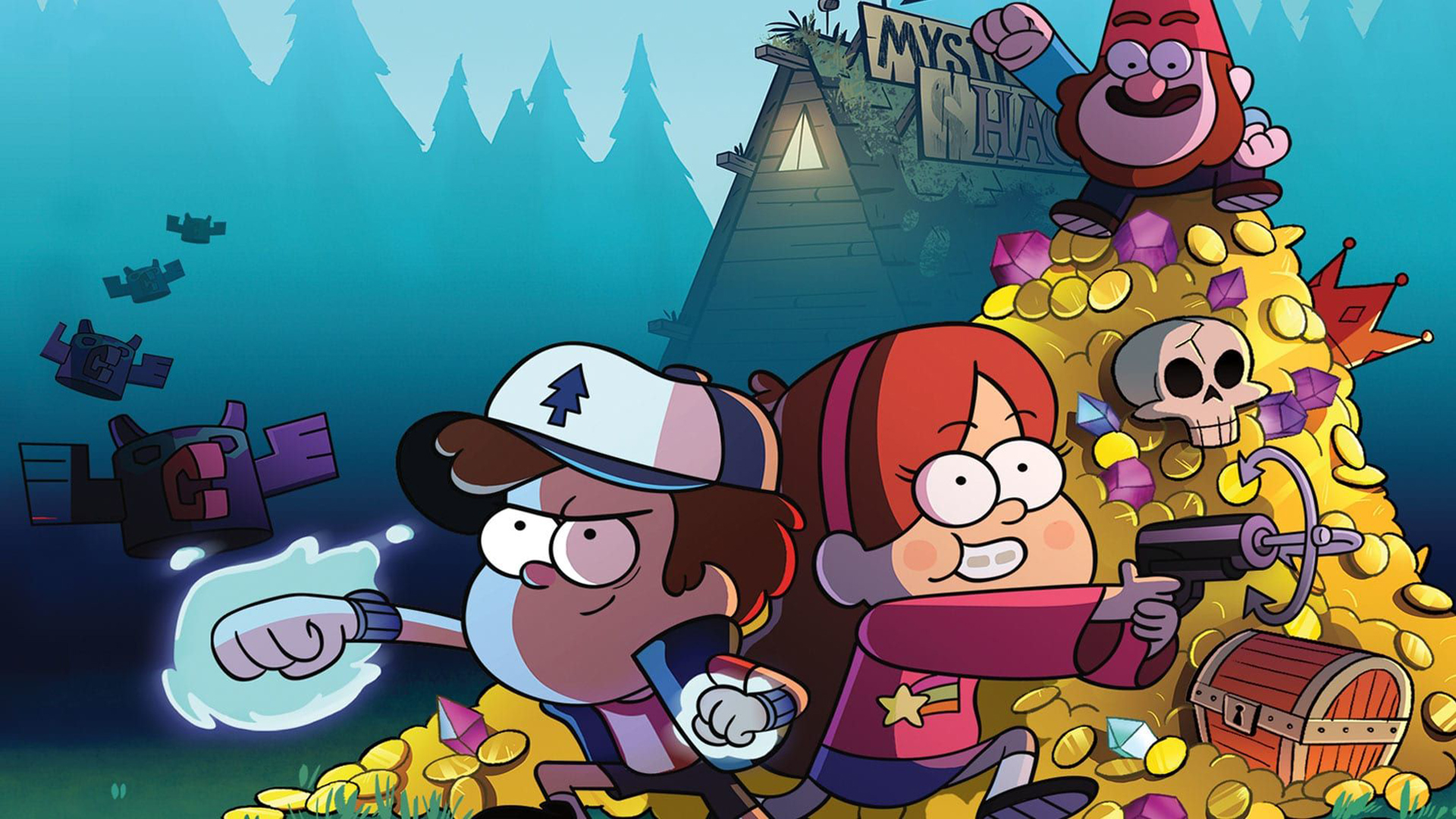 Gravity Falls and Ubisoft, a match made in confusion?

Not bad, but not good. There are much better cartoon based games out there.

Gravity Falls: Legend of the Gnome Gemulets is a platforming ‘action adventure’ 3DS game developed and released by Ubisoft in 2015.

Before we continue, can I just ask if anyone really knew about this game even existing? Because I sure didn’t: I only discovered this game on accident when boredly browsing through the 3DS Eshop one late night and saw it was on sale. 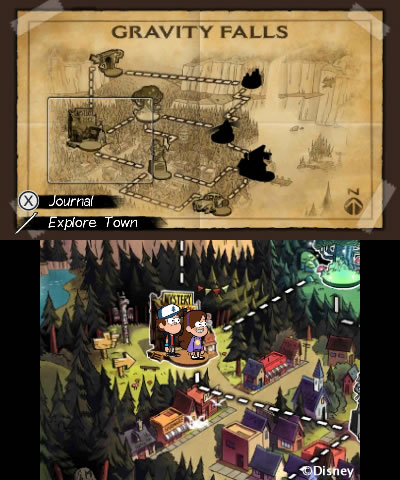 The plot of LotGG (boy that’s a weird abbreviation…) Is the pines are going to enjoy a family day together, until they see, what I can only describe as, a freaky tiki demon going off into the woods. Grunkle Stan sees dollar signs and tells Dipper and Mabel to go capture it.

After a short chase, they wind up in the Gnome forest where they see the tiki demon taking a gem from a pedestal, shortly after they meet up with Jeff the gnome that has nothing but contempt from other gnomes. He insists that the forest will slowly wither away if you don’t get the four elemental gems back, in trade for doing this he will give you tons of Gnome Gold. Grunkle Stan hearing the sound of money gladly signs you two up to doing this, (he is a master of smoke bomb teleportation by the way.)

That’s about it plot-wise, literally, it’s a sort of modified plot you’d find in one of those old RPGs but that ends there.

You get equipped with special gear from the gnomes. Dipper gets the battle braces that let him shoot out blue balls of fire at a close range, Mabel gets a special stretchy sweater that has plenty of range and can completely destroy bubble barriers that enemies will have.

Basically, Dipper hits hard and Mabel breaks defense, you think that’d set up a lot of complex possibilities for enemies right? No, not really. There are only about four types of enemies in this entire game not counting bosses. You got the regular ones that blindly attack you, ones that do the same but have a bubble barrier that Mabel has to break before you can beat the thing down, ones that stay stationary while casually spewing fire up to momentarily inconvenience you, and last but not least flying ones that you have to smack their attacks back at to hurt them at all. 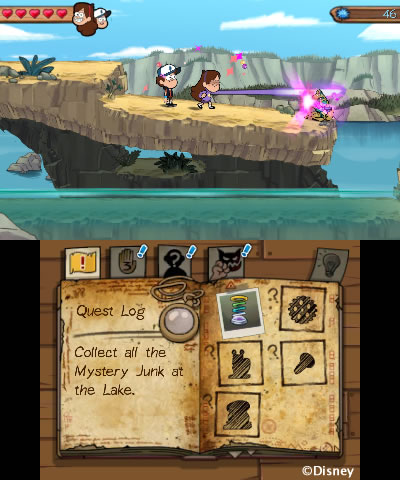 LotGG is sort of treated like a Donkey Kong Country game, where you switch between Dipper and Mabel as needed to deal with each situation as it comes. But in reality Dipper hits so hard you’re always gonna use him to fight and switch out to Mabel only to break those bubbles as needed.

Both characters, later on, get stuff like the gem-light that shrinks/grows Dipper to fit into small crevices, Mabel’s grappling hook to do the obvious, which Soos upgrades respectively for you as you play with no real effort required on your part to get these upgrades. No effort actually. 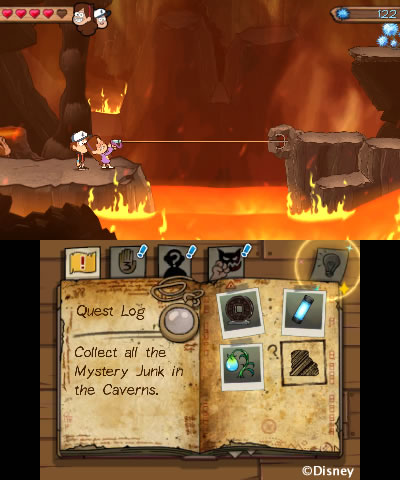 The only upgrades you can get are from the potion brewer of the game, Mcgucket. He can only upgrade three things though, Dipper’s/Mabel’s damage and your shared health. You pay for these upgrades with spores you gather constantly from beating enemies or simply picking them up like they are Mario coins.

The gameplay is weird. Everything about it feels weird, nothing is natural. Even simply pausing takes a full second sometimes to even pull up the screen. There is no physics to the ropes you have to climb, literally, you can hold left or right without any momentum and you’ll float all the way up without having to swing.

Shockingly enough though, unlike most Ubisoft games, there are not too many glitches. I only found one in my entire playtime with LotGG, that granted did cause me to have to close the game and reopen it entirely. Basically, Dipper and Mabel got separated and instead of warping to one another like they usually do, they kept saying “I shouldn’t leave X/Y behind” forever. Swapping characters weren’t working either since the second I closed the text box it repeated instantly.

The game is a straight forward platformer where you just hunt down the gems one at a time, the first of which is given to you for free while the rest got bosses guarding them… Or rather ‘boss’ because it’s the same boss for all of them. Which just requires you to use some of the tactics you used against regular enemies to tear them apart. AKA: Break the bubble barrier with Mabel, run up and Falcon Punch with Dipper. 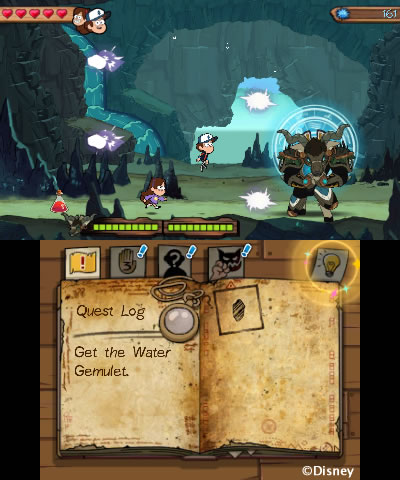 Aside from the main quest, you have truckloads of side quests that all basically turn you into the most oddly specific garbage collector in all of Gravity Falls, for the many characters you can interact with, though they at most have three lines of dialogue to express what they need you to find for them.

Waddles had his snacks stolen by raccoons, Wendy had her cassette tapes thrown out the car by her dad during a road trip, Pacifica dropped her dads’ trophies, Candy had her monster-mon fanfic novels stolen by high schoolers that threw them everywhere, Grenda lost her dumbbells by throwing them at said high schoolers. All of these items you can find throughout the levels or by beating them out of enemies, and I’m certain I don’t remember all of what you were wanted to collect. After a while I became rather numb to it, yet even when not actively going out of my way for the items I gathered a majority of them.

I’ve been doing my best to avoid the topic up until now, and that is the graphics of the game. They’re all 2D, nothing unusual there and for the most part, it looks like the show. But for some reason, a good chunk of the characters look like they were made in flash, with their limbs being the only thing moving. Which is weirder when the background is hand drawn. You only really are going to notice this in the town square where nearly all the collection quest givers are at. 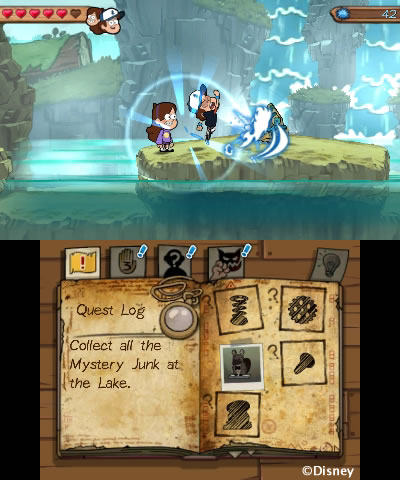 All and all, this game isn’t bad but it’s far from good. I had my brain off for the most part when playing it, especially when the bosses are nearly 100% identical with nothing much different to each. If you’re interested in it I’d advise waiting for a sale. If you want a good cartoon-based video game, try OK K.O.! Let’s Play Heroes. 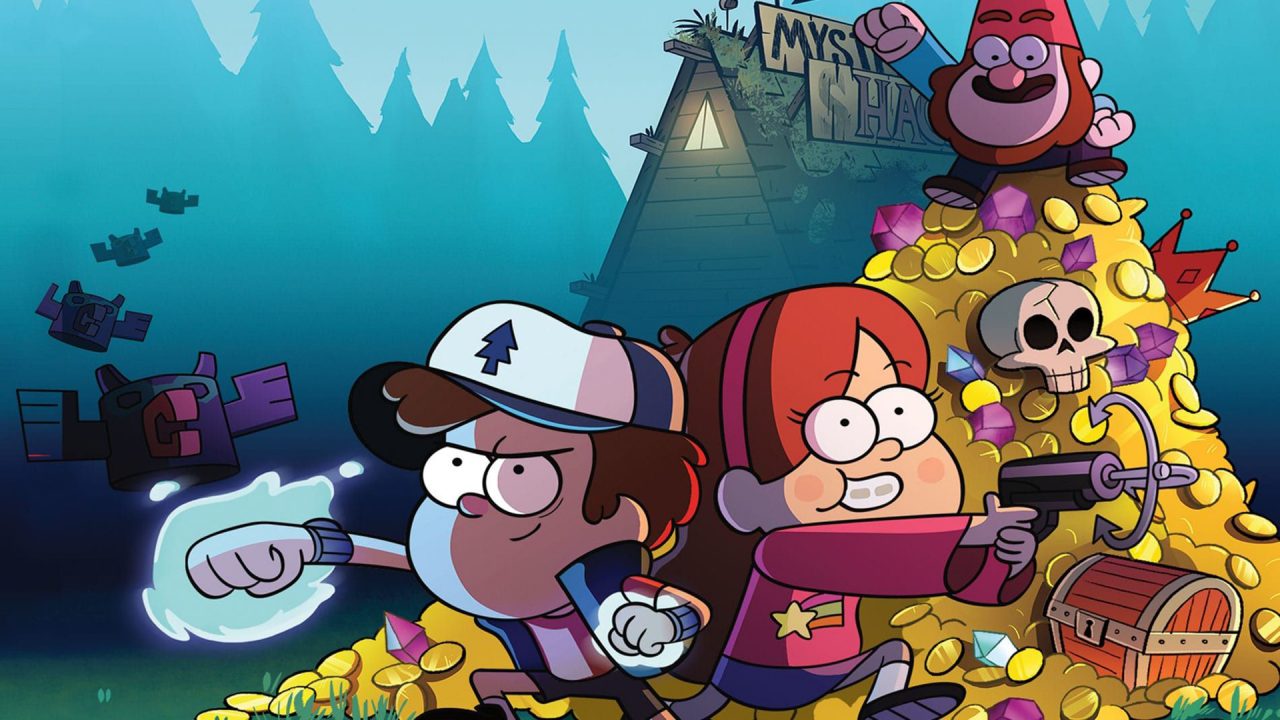