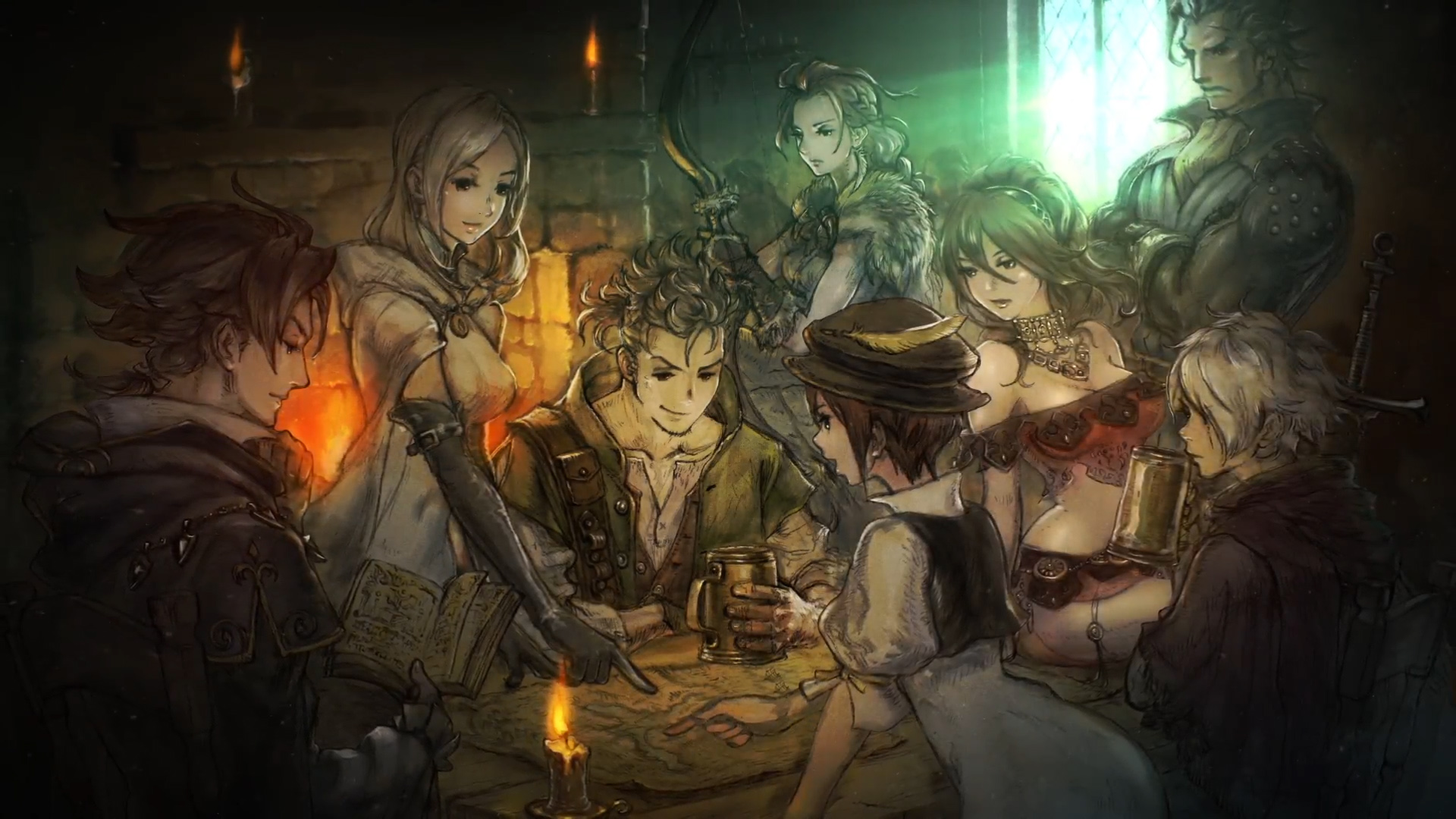 As much as I love old-school gaming, especially RPGs, one issue I think folks like myself tend to struggle with is the fact that new games in that “genre” (?) tend to feel forced. That seemed to be behind the positive-but-not-glowing reception of recent titles like I Am Setsuna – this feeling that some authenticity was lost in trying too hard to capture the magic of these types of games from our youth.

I’m not a game designer, nor am I an aficionado of different mechanics or design choices. I’m just a consumer. So it would feel equally forced for me to spout off too many backseat tips on how to get it right.

But I will say this – Square Enix recently released a demo for their upcoming Nintendo Switch exclusive, project Octopath Traveler, and it feels like a genuine nod to classics from yesteryear without trying too hard to hit that mark.

First of all, the visuals are fairly striking. They combine charming (good, but not great) 16-bit-style sprites, with a perfectly contemporary 3D world space that takes advantage of modern technology. This includes good use of particle effects, fog, nuanced lighting, and depth of field (I keep seeing people wowing over that with this title, but describing it in terms like “the background is more fuzzy and comes into focus when you move in this cool way!”. Folks: this is not a new technique, and it actually gets a lot of flack from some segments of the community in FP+TP titles – but I’ll agree it works really well for creating a sense of depth with this perspective). The end result is that the visuals manage to offer that “indie-retro charm” many of us are looking for in these games, while also offering up contemporary visual comforts. Cumulatively, a fairly distinctive package! 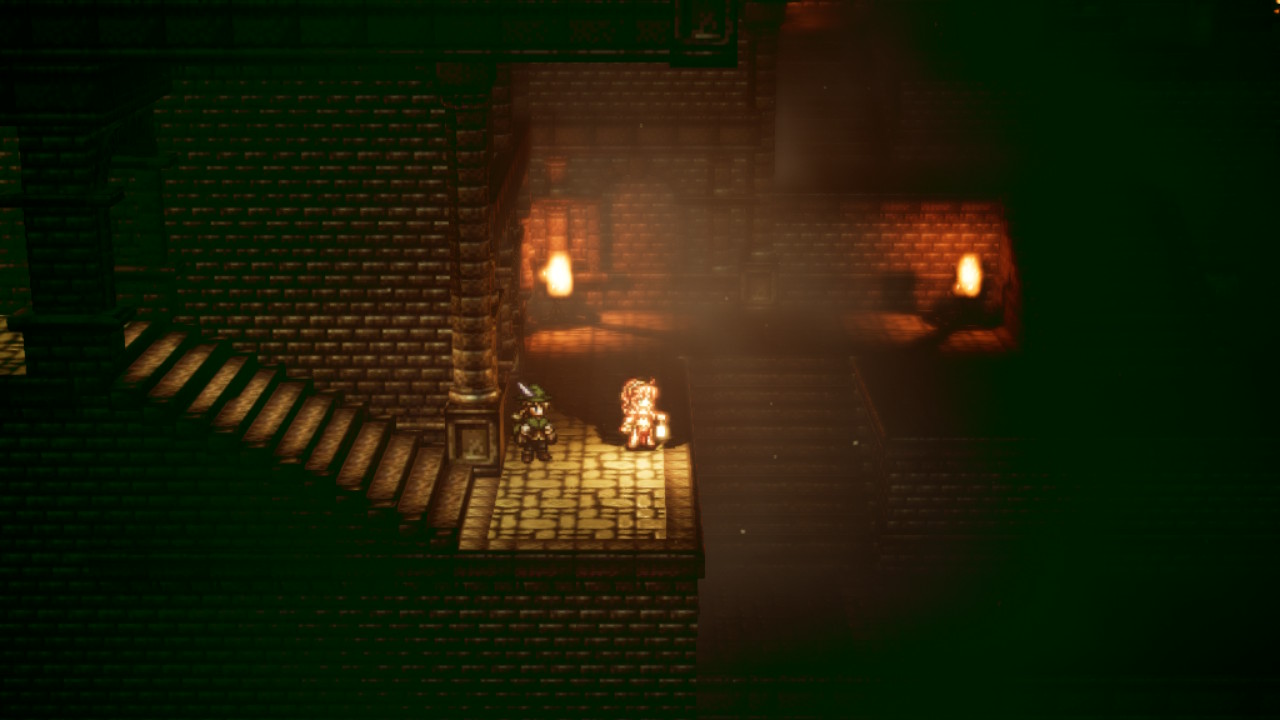 The music is also very very good. It varies to convey the current mood of the location or narrative, but what stood out to me more is how rich it is. The scores remind me of some of the higher-quality pieces associated with classic Nintendo titles like Chrono Trigger. When combined with the visuals, the game certainly has style. 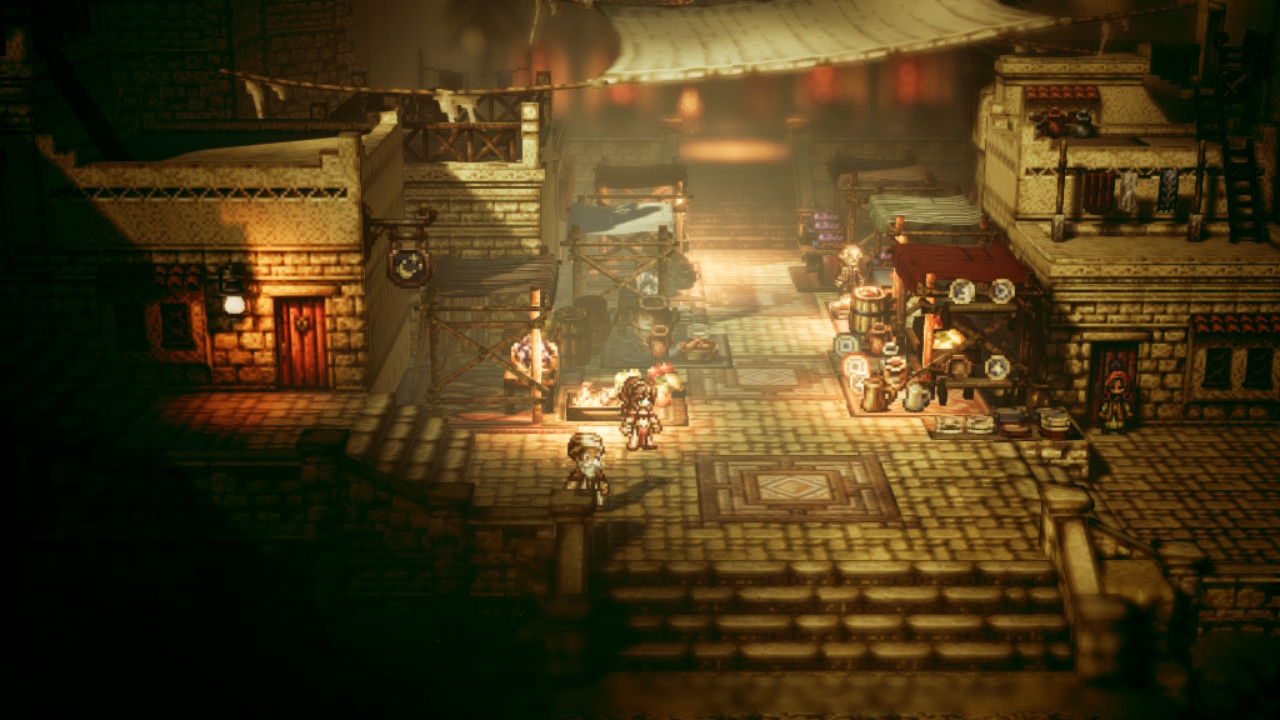 Now, in terms of the narrative, I think this is where the game starts off most strongly while also running the risk of dropping the ball down the road. For me there’s a big question mark how good it will turn out to be. The reason I’m very excited is that it appears to be structured around eight heroes who have simple-but-unique ways of interacting with the world and eight distinct story lines. Presumably, a la Dragon Age: Origins, these story lines converge as the game progresses – and that could be totally awesome, or be utterly underwhelming or even nonsensical. I wonder, will it become overly one-note within each of the story lines? We simply haven’t tasted enough of it through the demo to know.

What we HAVE tasted, though, is very encouraging. In the demo you get to play the very first chapter with two of these eight characters, and the experience is pretty strong. The narratives are simple (I really hope there’s a bit of interactivity with the dialogue as the game opens up), but they are compelling and distinct. There is also a surprising amount of grit in the world – this isn’t just a tale of cuddles and happiness involving invulnerable heroes laughing and high fiving as they crush evil. There’s sexual assault, innuendo, murder… Mind you, it’s all delivered in a very PG way. I don’t think we have to lock our kids out of the room. But for players paying attention, this is a grim world in need of some somber heroes. Ultimately, although I’m a bit nervous about how well it will all gel together down the road, if the devs have their wits about them this could be a real gem.

Lastly, it’s worth mentioning combat. Combat is turn-based, and relies on the traditional attack-special-item-defend options that you see in most JRPGs. I don’t think it’s PARTICULARLY distinctive, but it does have some nice design choices that force you to be strategic. For starters, every enemy has different weaknesses, and this becomes very relevant due to the fact that every enemy also has a ton of life and regenerating shield points. Until their shield is knocked down, your damage for non-weakness-targeting attacks is paltry, and your damage with weakness-targeting attacks isn’t all that much better. But it’s not a grind – or it’s not meant to be. They have a lot of HP in order to force you to strategize on how to deliver your attacks. 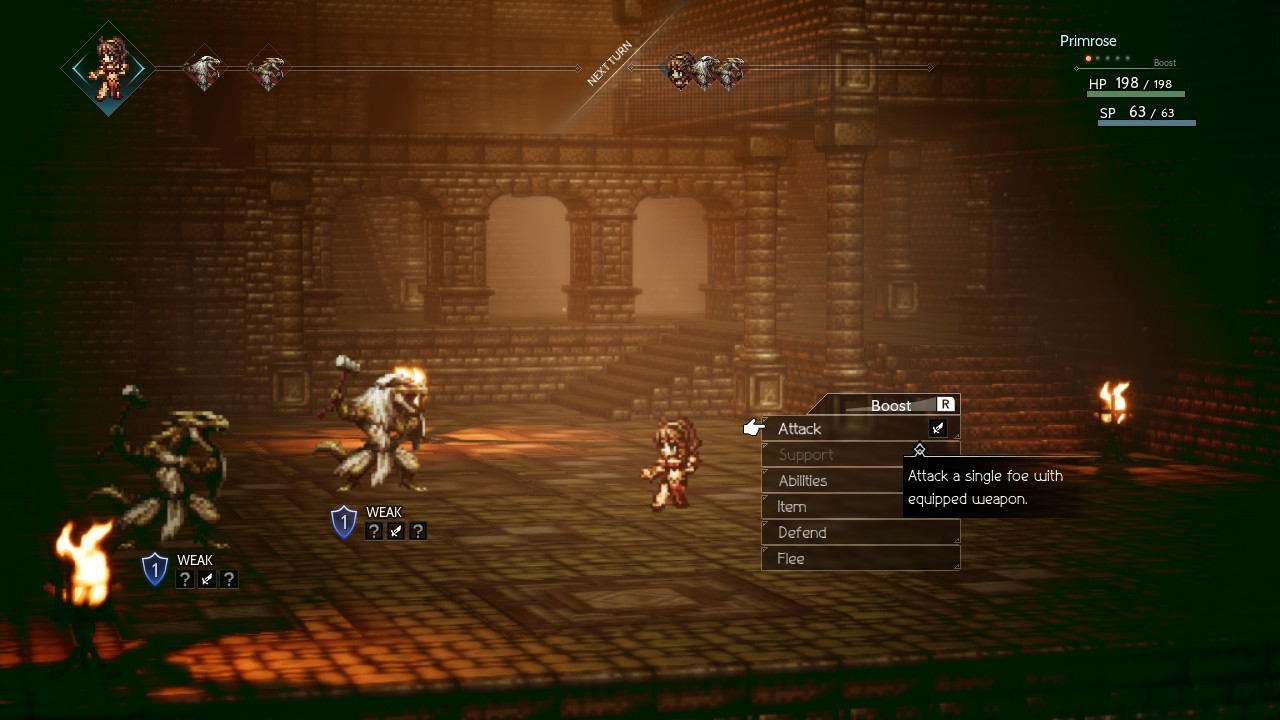 The basic loop is something like the following: expend as few resources as possible on breaking the shield down, at which point they are temporarily stunned and vulnerable. Then expend a lot of resources to wallop them in this stage. One way to achieve this is by spending Boost points to do more than one attack in a turn. Boost points are earned at a rate of one per combat turn. As an example: say you are facing a monster with 3 levels of shield, and a weakness to one of your special attacks. You can spend 2 Boost points in a turn on a “basic” attack in order to do 3 hits and knock the shield out. On the next round, you can then spend Boost points (hopefully you saved multiple!) and some “mana” (SP) to perform a suped-up special attack that hits their weakness hard. Boom, huge damage. If you juggle this loop correctly, you can even keep some monsters in a state of disarmed stun and kill them without ever getting hit. Of course, sometimes it may be best to spend your resources hard and fast even if their shields are up. Weakness-targeting hits will still do more damage and knock down shield points – if you expend 3 Boost points with a high power special, you’ll get in 3 hard hits against their health with their shield up and then a very hard 4th hit when the shield goes down. All in one turn!

I’m not sure there’s much more to say at this point. The demo is very brief, and there’s a lot we don’t know yet about the game. How will the stories evolve and converge? Are there other mechanics we will unlock as we progress? Does combat evolve and become more complex? What I’ve seen so far is pretty brilliant, though – an authentic feeling JRPG with an interesting plot delivery system and dark world that oozes class and seems destined to have good replay value (at least 8 times?). Color me excited.