10 Hours of Anthem on Xbox One – My First Impressions

The launch of EA’s new shooter-looter has been…. let’s say confusing. The rules and requirements are different for every platform. Everyone who purchased the game will have access to the game on February 22nd, but the publisher is allowing members of its Xbox EA Access and PC Origin Access programs to play the game early. Last Fall, I bought a one-year subscription to EA Access to get a discount on FIFA and Anthem and get access to some older EA games. I didn’t know it at the time, but my subscription would also allow me a 10 hour trial of Anthem before the official release on February 22nd. I took full advantage of that trial over the course of four days and I’m ready to share my experience.

To party, or not to party

To preface, I played the entire time solo. I plan to squad up after the official release, but I don’t know anyone else with EA access on Xbox. Whenever a studio known for great single player games transitions to multiplayer, there is often concern from dedicated fans that the core gameplay will not work or will have to change for multiplayer. Sometimes this doesn’t work (Fallout 76????), but I think Anthem gets it right. I was pleasantly surprised the first time I was auto-matchmade (this happens for most non-freemode missions) into a group for a campaign mission. It was nice to have teammates to support me, but I didn’t feel like I needed them or that they were holding me back. Toward the end of my playtime I got to try a new mission type, a stronghold mission, and that was the only time that I felt the need for a four-person squad, though communication was not super crucial. It’s my impression that you will have more fun playing with friends, but the campaign can definitely be accomplished solo utilizing the game’s auto matchmaking feature for missions. From what I have heard about the end-game, the harder content will likely require synergy with your teammates to complete.

I played all 10 hours on my Xbox One X and the game definitely looks great on it. The artists did a fantastic job building a world that is beautiful and interesting to fly, fight, and explore in. Anthem also feels great to play. Flying is really intuitive and fighting really tickles that part of my brain that wants a power fantasy. I think this was my favorite part of the gameplay. Even though you carry a gun, Anthem is much more than just a shooter. I actually did most of my damage using abilities and I hear that this is consistent with the best end-game builds right now.

At the end of my 10 hours, I had tried out two of the classes that Anthem has to offer. There are four classes total, and you unlock them one by one as you level up. Once you have unlocked a javelin class, you are able to freely switch back and forth using the forge in your base. I first tried the Colossus (the slowest / tankiest class), and then unlocked the Interceptor (the fastest / squishiest class). These playstyles could not feel more different and it makes me so excited to try out the other two classes. There are also a heap of different gun types and everyone that I tried felt viable. Trying to master the different classes and gear will definitely add some longevity to the game.

My first impressions of the story is that it is very good for a co-op looter game and there is tons of lore that is optional for the players that want it. I was happy to see that there was an in-game codex that keeps track of all the nitty gritty details for characters, places, missions, and stories. Players who love this stuff can spend hours piecing it together, but if you are just here to shoot monsters, you can ignore a lot of the lore and still enjoy the game. I do have two complaints about the story. First, it falls into the all-too-monotonous loop of

My second complaint has to do with a quest that has already received a lot of criticism from the community and a response from the developers. Following the main storyline, you will come across a quest that is meant to introduce you to all of the things in freemode. The frustrating part comes when you cannot advance without completing multiple challenges ranging from the mildly interesting “Kill X number of elite enemies” to the tedious “Harvest X number of materials” and “Open X number of chests.” It has been improved, but still feels like an artificial way to lengthen the story-mode. It is promising, though, to see Bioware having such a quick response to criticism. I didn’t finish this quest during my demo time and instead focused on side missions which are rewarding and feel like full-blown missions.

I was invited to play a closed alpha and beta for Anthem. Neither of the builds worked for me for more than a mission; it was pretty unplayable. I was excited to try the game, but when these flopped I was nervous about my preorder and what my experience would be with the full game. Well, I am happy to report that I encountered a relatively small amount of bugs and disconnects during my 10 hours. Reading online, it seems like a lot of PC players are having issues with incredibly long load times, but I didn’t experience anything like that. Outside of maybe five disconnects and some quirky visual bugs and frame issues, my time with the game was pretty flawless. The developers are aware of many issues and will be releasing a patch on February 22 that should improve stability.

I thoroughly enjoyed my 10 hours with Anthem. The story was fun, the game looks great, and the power fantasy is amazing. Long-time Bioware fans are definitely going to enjoy the campaign. As with other games in the genre, the success of the game will rely heavily on what happens in the end-game and the support going forward. Early reports of the end-game have been met with less-than-stellar reviews, but no one will have the full picture until the Echoes of Reality update in March. 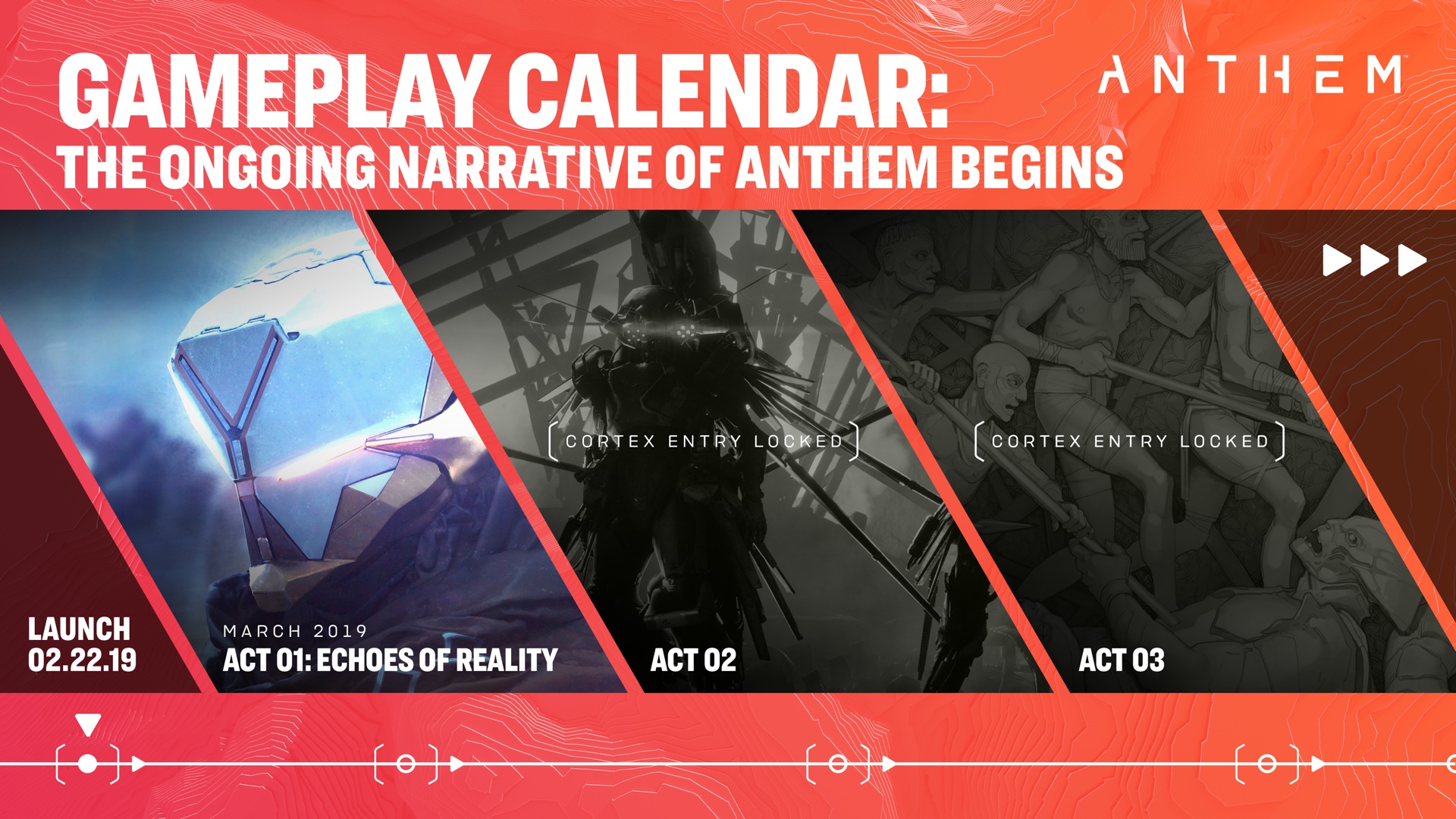 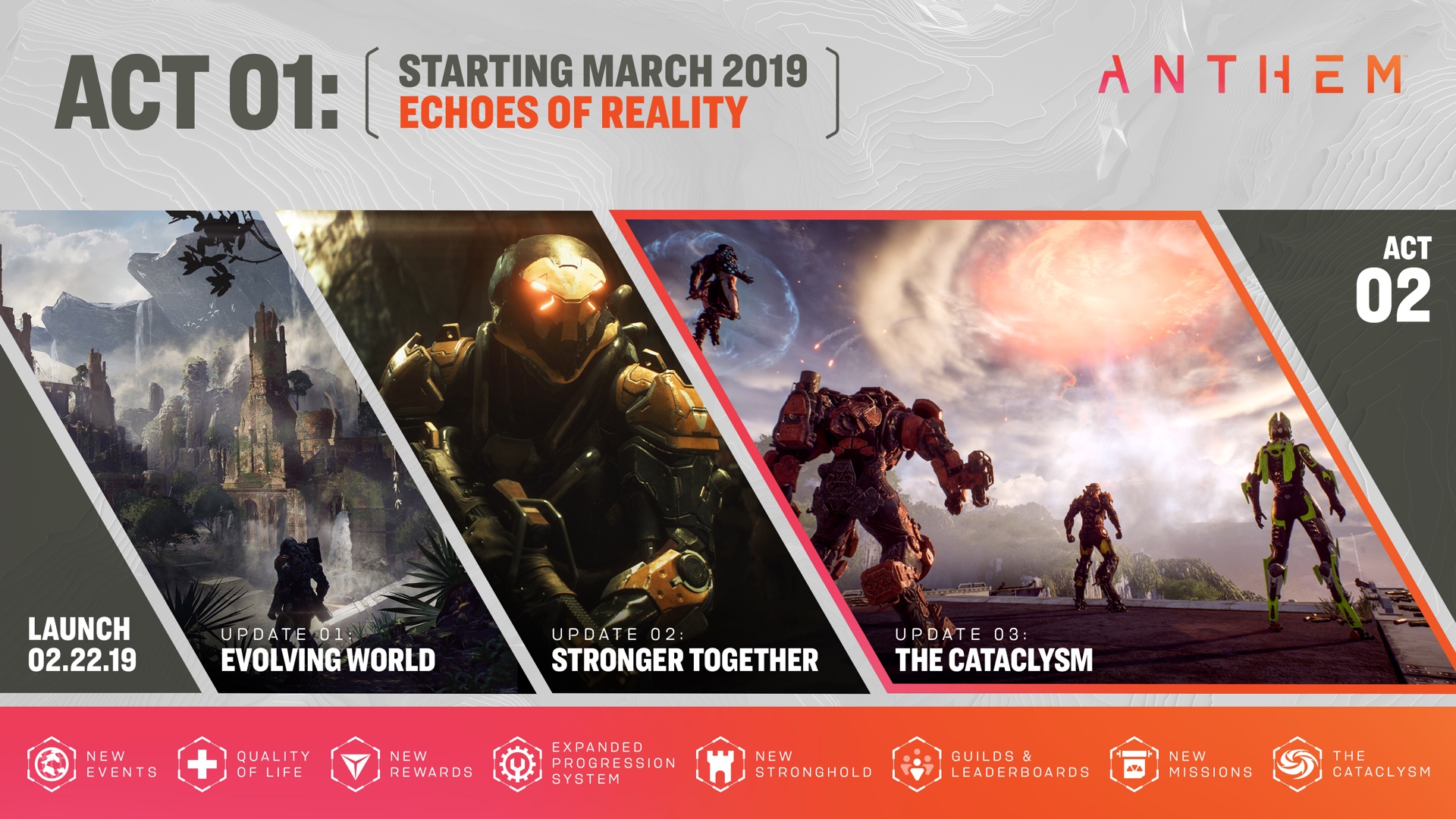 Playing this game, I couldn’t stop comparing it to my other recent favorite looter franchises: Destiny and The Division. The movement system in Anthem has the buttery-smooth feel that made me fall in love with Destiny, but with less of a focus on gunplay and more so on abilities. The gear in the game, however, feels more like The Division where different pieces can synergize to allow incredible diversity in viable character-builds.

This has been a weird launch experience for me – from an unplayable alpha to a 10-hour demo playing by myself and now waiting a few more days to be able to play again and with my friends. Even so, I am optimistic about the future of Anthem and I am recommending it at least as a game packed with a sizable campaign that is great in solo or party play. To find out if this game has potential to be a hobby for years to come, I’ll have to wait until I get my hands on the full game. Keep an eye out for our rolling review after Anthem’s official launch on February 22nd.