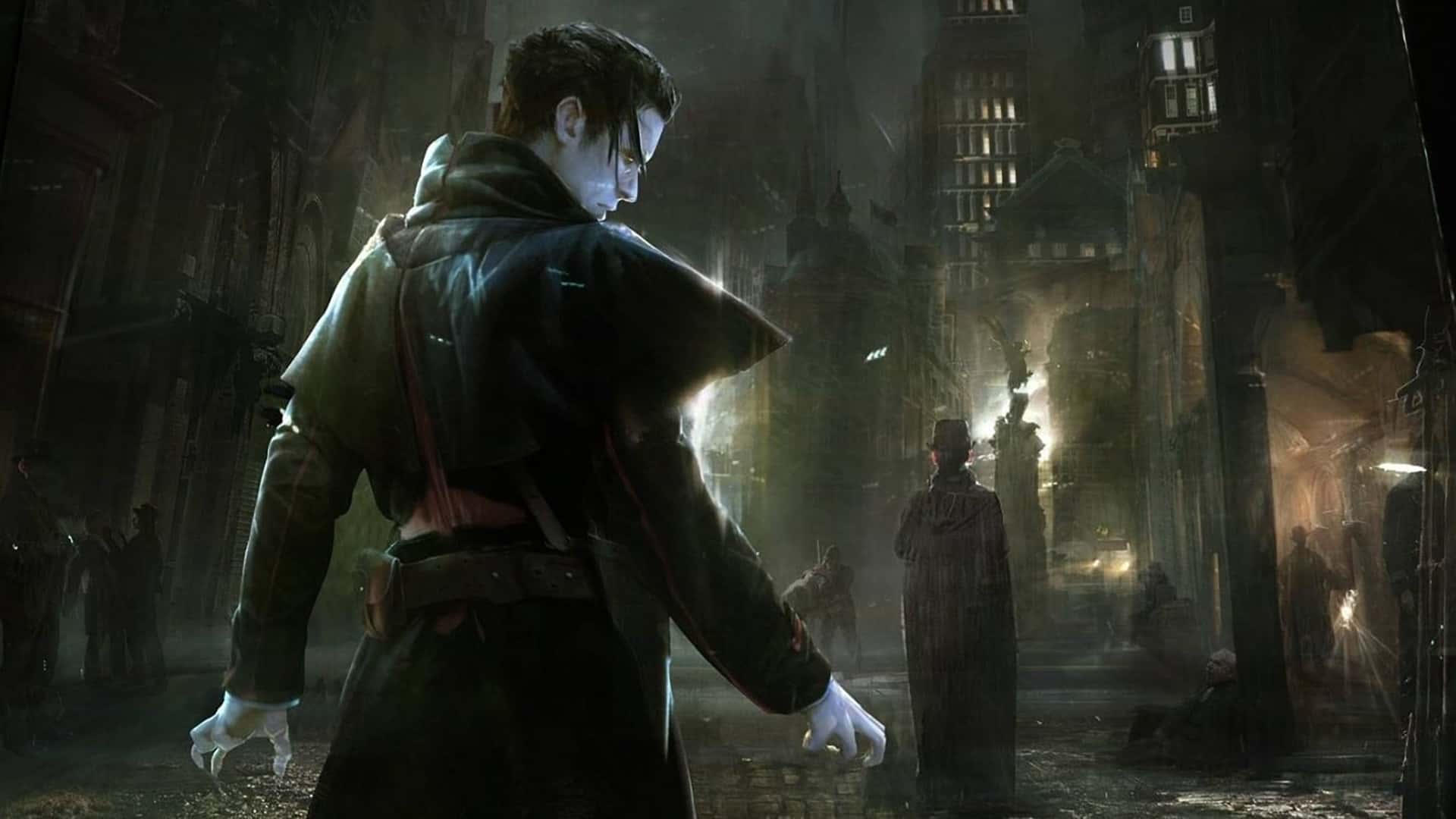 A decent game but it has some serious flaws

Vampyr came out a little over a year ago now so I know this review is late. But as it has been a year now, it seems like a good time to start talking about it again. Overall, my experiences were positive, but I do have some fairly big complaints. If there is a sequel, those issues should be fixed. And there should be a sequel. There is a lot of good here that I think would make a great jumping-off point.

The highlight of this game is the story. There are several twists and turns, a vast array of characters, and some really unique bosses that really makes the journey worth it. Without giving away any spoilers, you play as Dr. Jonathan Reid, a doctor just returning home to London after the war. The year is 1917 and London is a mess. The gang presence is unsettlingly high and the Spanish Flu ravages the city. Sadly, you become a vampire before you even get a chance to reunite with your family.

Early on, you meet a man named Edgar Swansea who knows a bit about vampires and just so happens to be a doctor himself. In fact, he runs a facility called the Pembroke Hospital and offers you a job working the night shift and your own office where you can sleep during the day. Quite a generous offer considering vampires have the unfortunate habit of killing people. 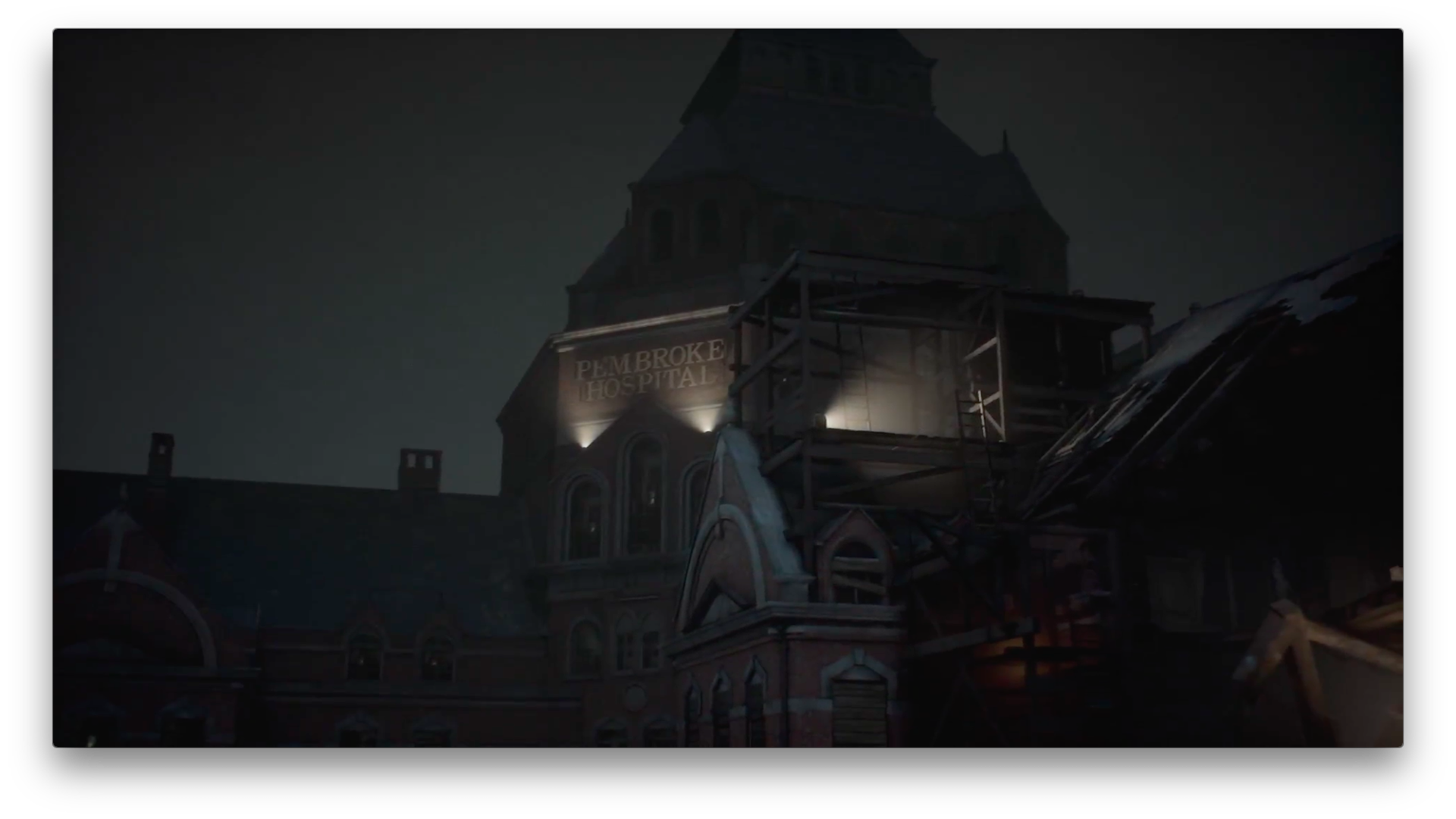 The Pembroke is the first area filled with people. And as I said, they are diverse. Everyone has their own personalities, histories, secrets, you name it. There was clearly a lot of care put into the shaping of every person you come across. Except for enemies of course. But all non-hostile people are very different and have varying stories and secrets that await the curious.

These secrets can be uncovered in various ways. The easiest is talking to the other people in the area to see what they know. One person might be more willing to talk about other people’s dirty little secrets more than others. The other way is through side quests. I haven’t done all of these, but I have done a fair number of them. I can assure you they are worth doing. They really can add a lot to the different characters, or sometimes they just give you a better understanding of what is going on. Plus you get XP which is sparse in this game.

Leveling up in Vampyr is designed to be difficult. Acquiring XP is not really that easy. Enemies that you come across on the street give you a little, but when I say little, I mean little. Like 5 XP for every kill little. Most of it is, of course, going to come from completing quests. The rest comes from becoming a psychopath.

Should you choose to kill as many citizens as possible, you are going to make it rain XP. That is most assuredly the fastest way to level up and get stronger. In my playthrough, I was pretty much always under-leveled. Some people you can kill straight out of the gate, but that isn’t really the best idea either. 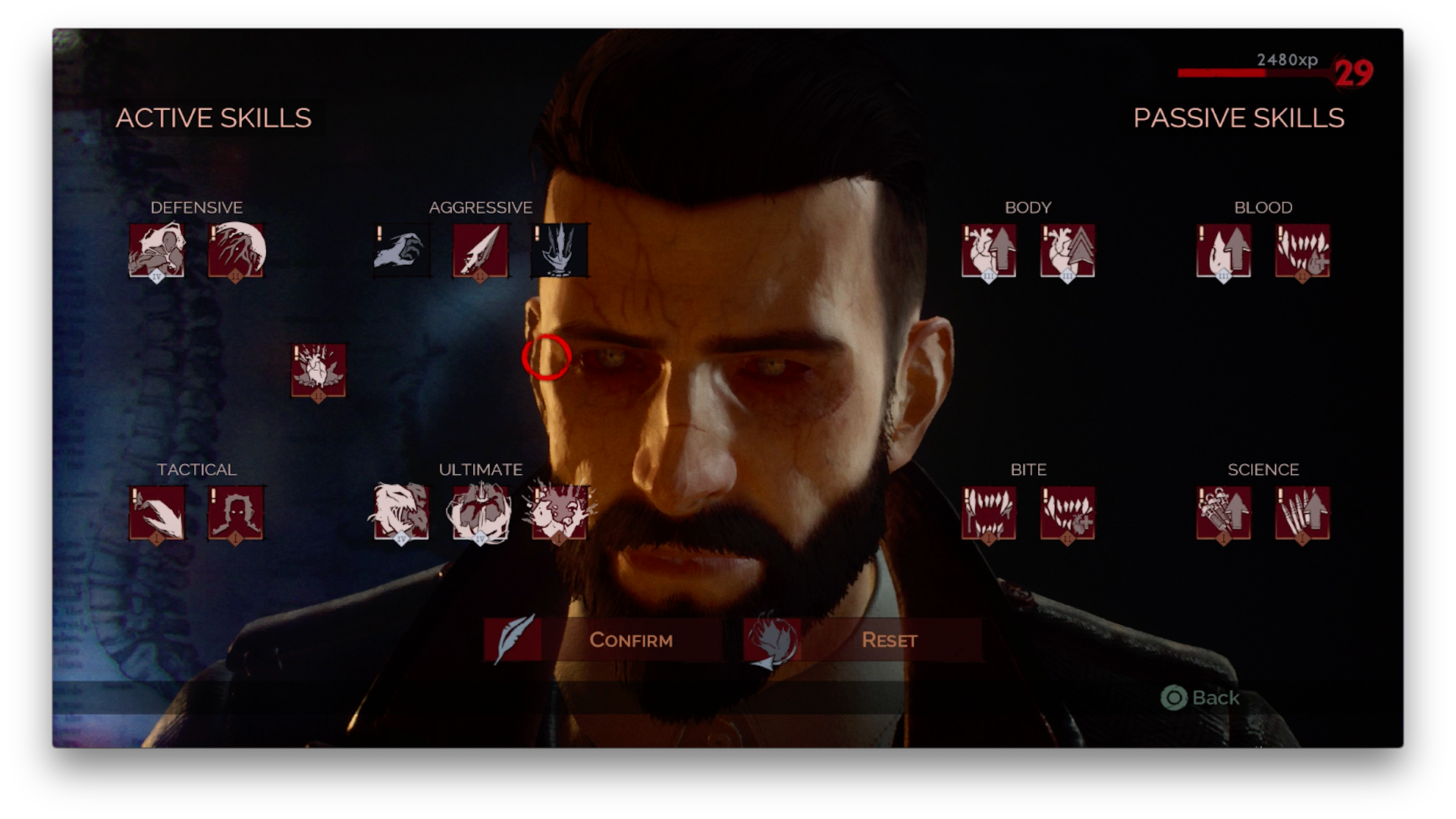 You get more XP if you do their side quests and learn as much about them as possible. You also get less if the person is sick. The more severe the illness, the less you will benefit from their death. Fortunately, you are a doctor. You can cure silly little things like illnesses. Then you can be extra cruel, and kill them for all the sweet, sweet XP.

Basically, if you don’t want to kill people, it’s going to be a rough ride. I killed no one until the last quarter of the game. Three in total and two right before the final boss. And I was still quite under-leveled. But if you learn how to fight, you’ll get there in the end.

I’m going to be completely honest here. The combat needs a little work. It’s a little clunky and unpredictable from the start. You have to lock on. If you don’t Jonathan just flails around swinging through the air like he has a massive depth perception issue. A lot of games benefit from a lock on but the hero isn’t usually completely useless if you don’t.

You don’t have a ton of weapons to choose from, but I know I didn’t find them all. You have more choices of one-handed weapons than two, but that is a good thing. The enemies are fast so I found any two-handed weapons to be more of a liability than anything else. I found having one main weapon and one off-hand weapon to be the most useful.

As you start upgrading your weapons, parts get harder and harder to find so sometimes going to a merchant is really the best course of action. For that reason, I found one weapon I liked and stuck with it. At least until I found something that was vastly more powerful. And don’t underestimate the firearms. Things like a shotgun can save your life in certain circumstances. 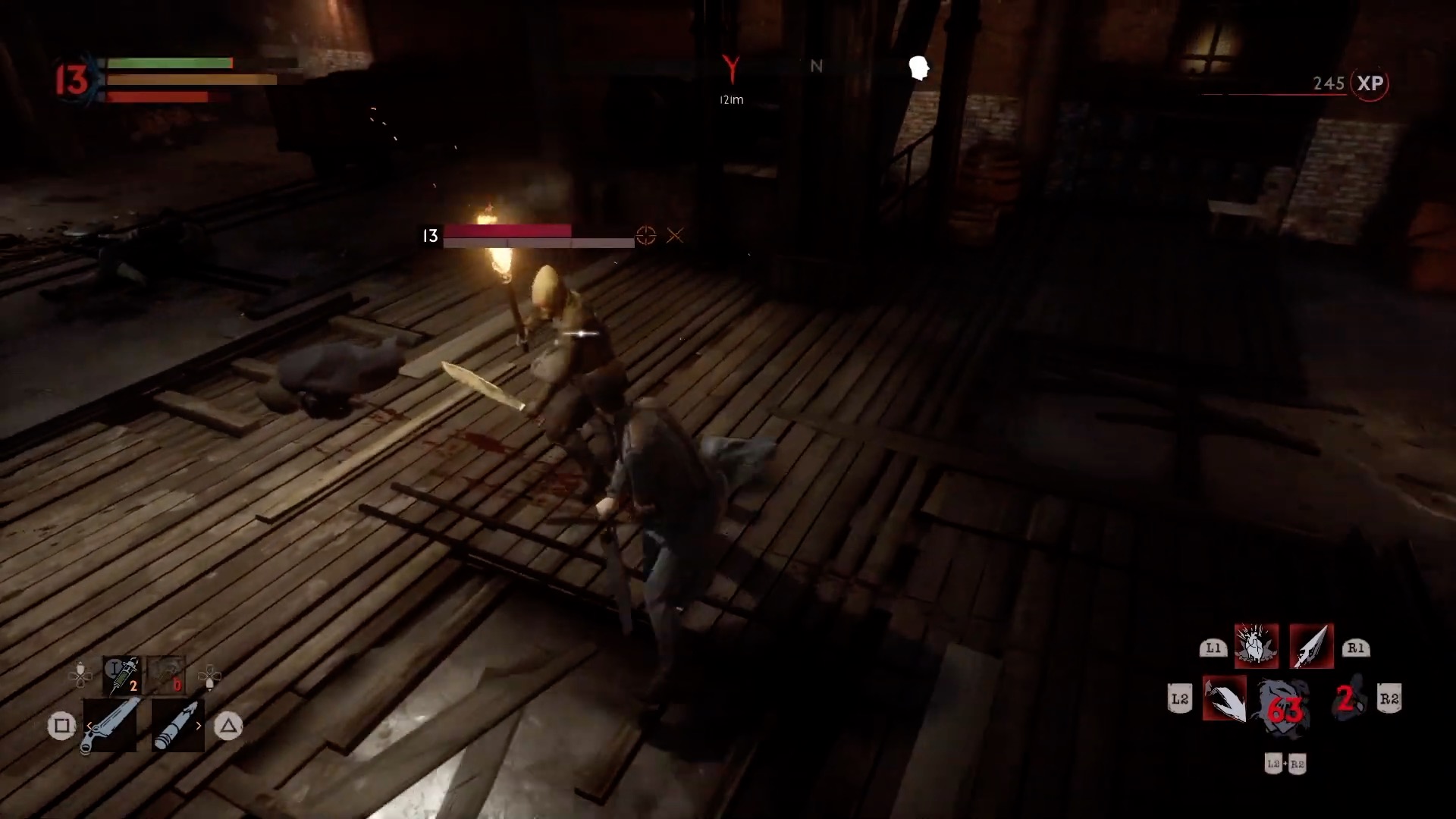 This is the game’s saving grace with the combat. Some of the powers you can unlock are spectacular. And upgrading them can often make them an even more entertaining spectacle. Take Coagulation for instance. That starts off as just freezing an enemy for a few seconds so you can get some hits in. Later on, it does that and gives you blood, which is what you need to use more supernatural powers. You can see a ribbon of blood coming from the enemy straight to you. Perhaps that sounds a little sick and twisted but this is gothic London with a Spanish Flu epidemic. Things were never meant to be cheery.

There are two different kinds of powers; blood and shadow. From the start, it doesn’t really matter what you use. Humans are susceptible to both of those attacks as are Skals. Skals are lesser vampires that are vicious and troublesome. Honestly, they are more like zombies than anything else. Most of them don’t think or speak, they just attack.

Jonathan, on the other hand, is nothing like that. He behaves just like anyone else and functions as fiction has taught us vampires do. He is called an Ekon. In the later parts of the game, you will have to fight some Ekons here and there. Blood Ekons and Shadow Ekons if you couldn’t guess. It is best to use the opposing powers against them as they do more damage. But it really isn’t that critical either way. 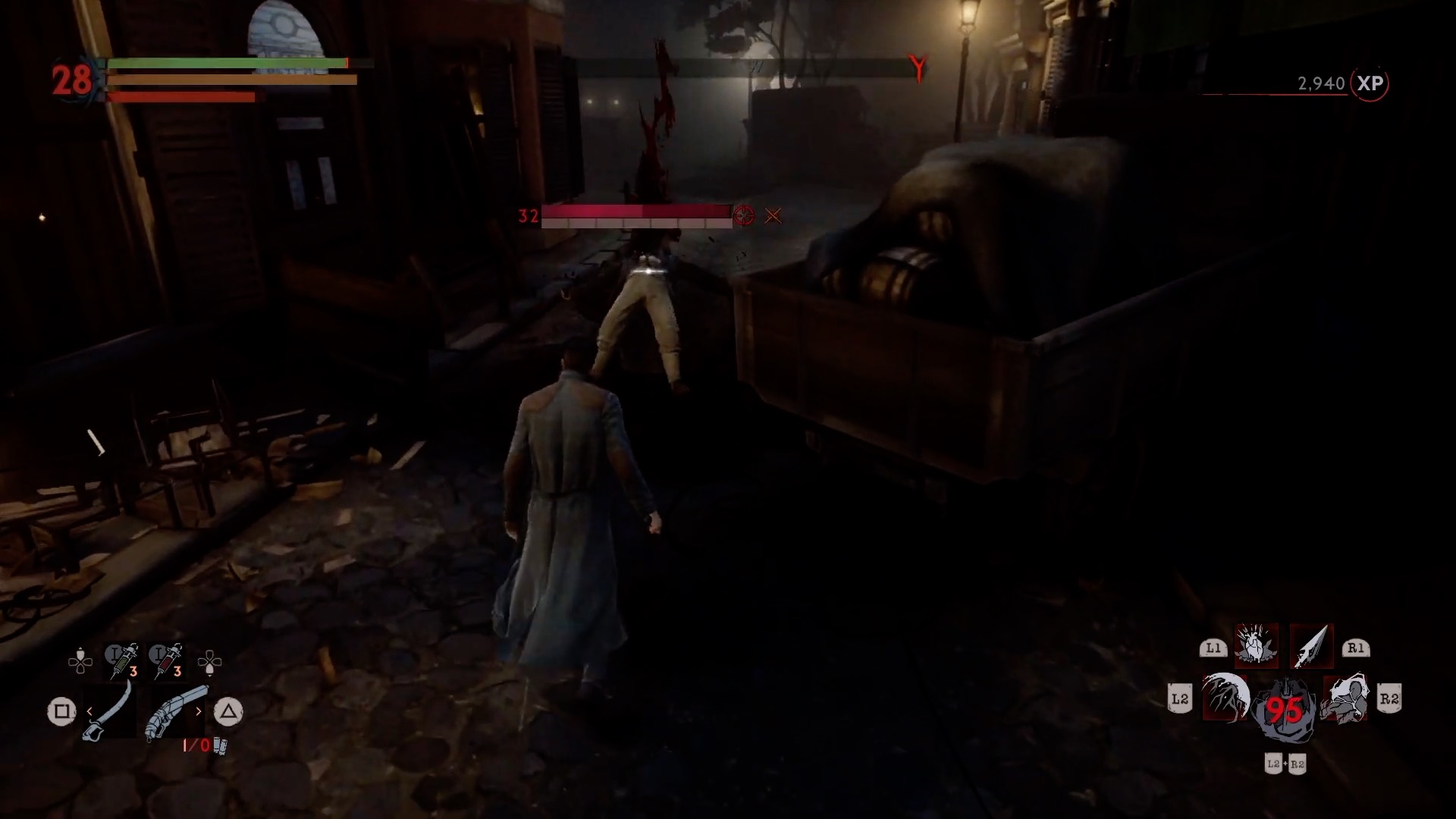 The bosses are difficult to explain. They are part of what makes this game good, and at the same time, one of the worst things it offers. I’ll start with the good things. They are, like the characters you meet, incredibly diverse. Some of them have backstories that you uncover throughout the game. Others are characters you have known from early on who are just whiny little assholes. Others have no personality but are more of an introduction to a new type of enemy. The general rule of thumb: if there is a cut scene, they are important to the story. No cut scene means you’ll be seeing more of these guys around London.

The way they fight and the areas in which the battles occur are also fairly varied. Some of the first boss fights in the game are against John Doe and a Sewer Beast. John Doe is a Blinker Skal who is just a Skal who teleports. Beasts are like werewolf/vampire hybrids and this one happens to live in the sewers. Very different fighting styles, vastly different attack patterns and just a lot of fun to figure out. Patience is the key to every boss in this game. 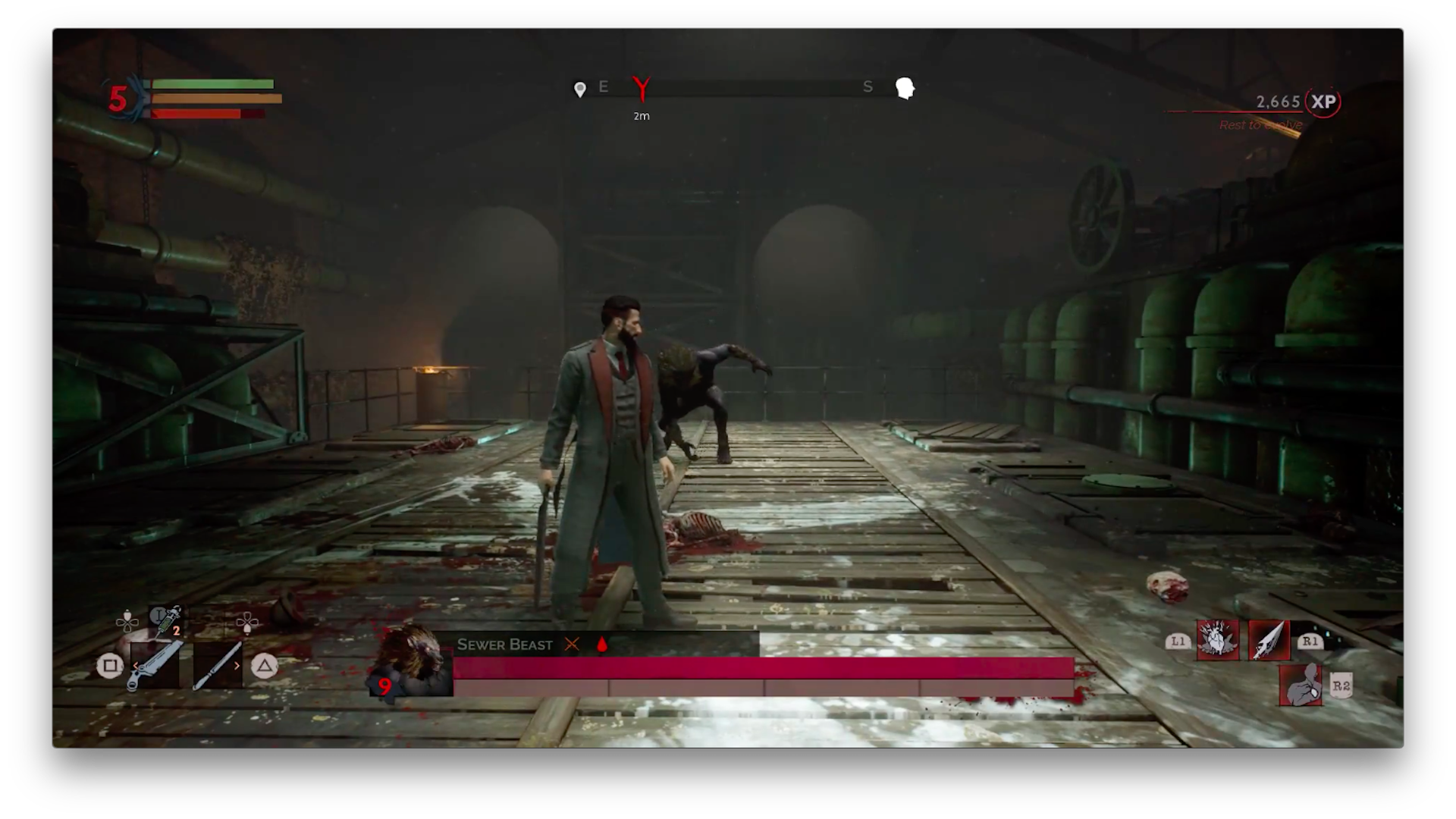 Now for the bad thing about boss fights. They. Are. Constant. There are WAY too many of them. By my count, there were 15 different battles throughout the game. It feels like almost every main story quest, no matter how minor, has a boss to fight. And these quests are not these long, epic journies like in The Witcher series. So it honestly feels like you are fighting bosses one right after the other.

That may seem like a stupid complaint to have, but it gets really annoying over time. The reason for that is the levels of these constant fights. For instance, the Sewer Beast is level 9. The very next boss fight is level 14. Are you serious Vampyr? I think I was level 5 in the sewers so I was weaker at the start. If you don’t want to kill all the NPCs, it can be tough and frustrating.

I wound up getting so annoyed in fact that I stopped playing the game entirely. When I came back I thoroughly enjoyed it again, but I had to take a several month-long break. I understand that the game should be challenging if you don’t kill all the NPCs, but it shouldn’t be to the point that I want to put down the controller. And I did.

A big selling feature for this game was player choice. Do you kill the citizens or save them? What will you do with different characters as the events unfold? Well, it seems only some of these choices make much of a difference. In each district you go to, there is a Pillar of the Community. There is always a choice that affects them directly in the main story. The choices are to kill them, let them live, or a secret third option. The later can be unlocked by talking to the other characters in their district to learn their nasty secrets.

Those choices make a big impact and the “right” choice is not always easy to see. Lord knows I did not always make the right choice and a few districts suffered the consequences. But if you decide to kill someone else for their XP, there won’t be a whole lot that happens. If you kill a lot of people the whole place will fall into chaos, yes. But otherwise, the consequences are pretty minimal.

There are dialogue choices as well. So as you talk to someone, sometimes a choice comes up and you must choose one of three responses. Mind you, what they read and what Jonathan actually says can be different to the point of unpredictability, but these choices almost never make any difference at all anyway. So it doesn’t really matter. 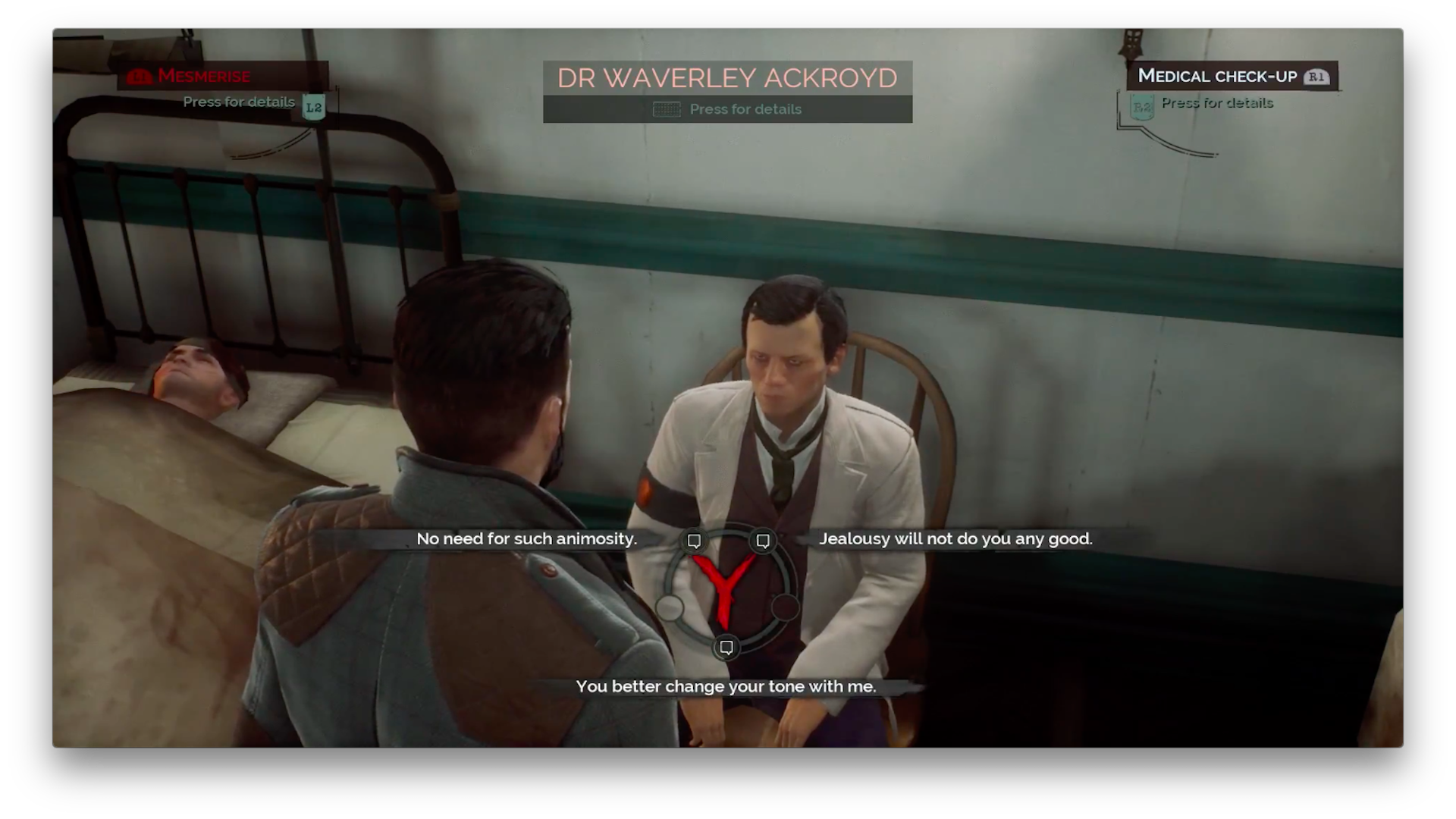 Overall, my experiences in 1917 London were enjoyable. But there were some pretty big issues. Big enough that I stopped playing for a time. In reality, I think this game is a really good jumping-off point. I have heard rumors of a sequel, but those have not been confirmed by anyone even remotely reliable. I hope those whispers are true though. There are a lot of things that were done right or just need a few minor tweaks. I would like to see what can be done with this game as a base and I think if future games do come, they will be excellent.