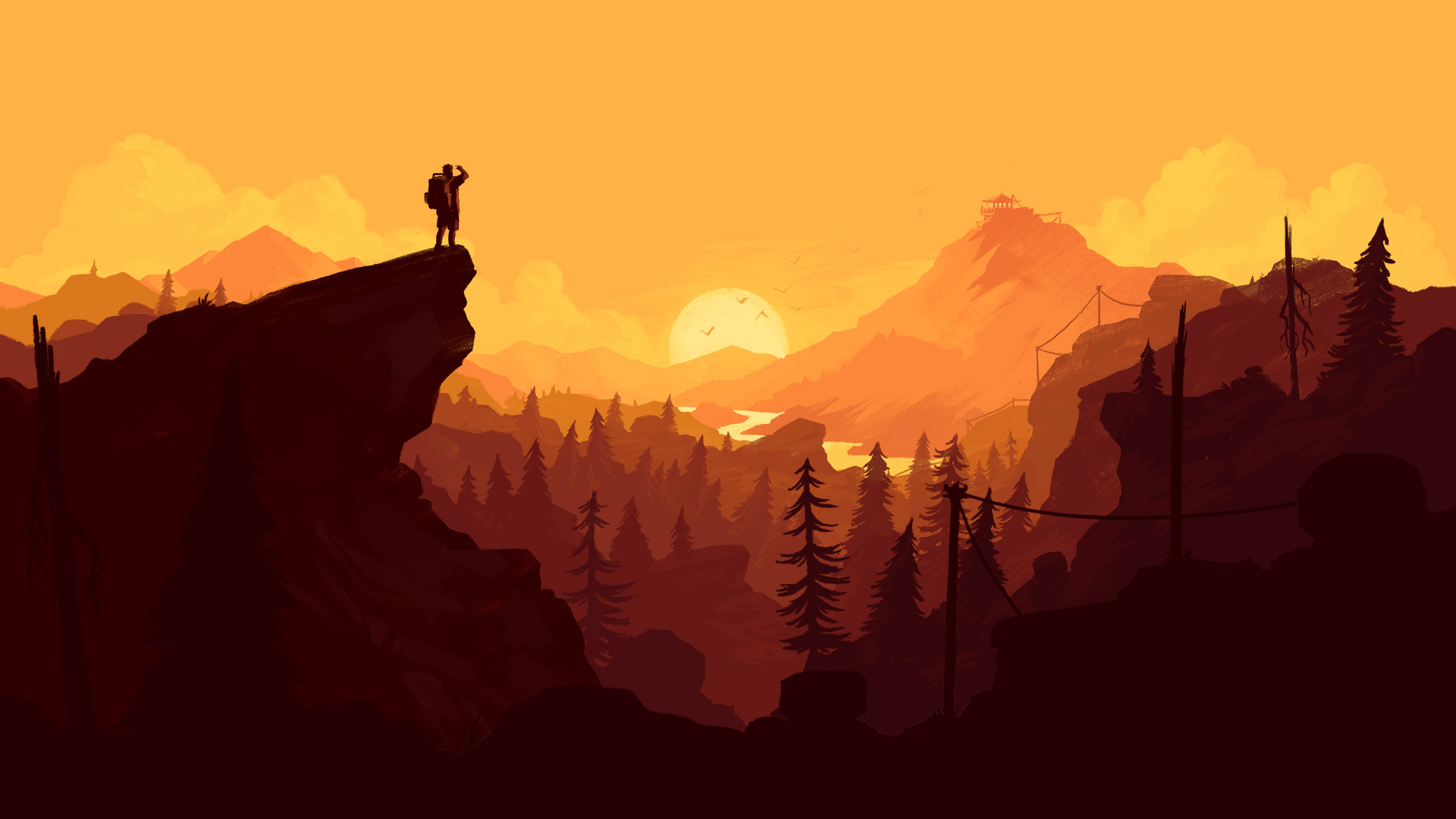 Unfortunately This Walky Talky Does Not Have Much To Say

In Firewatch, you’ll spend a lot of time walking around and listening to the characters talk. Walk here. Answer your radio. Walk there. That about sums this game up. With gameplay taking a backseat, the characters and story take the forefront, and while the characters are great, and the dialogue between them sounds natural and real, the story is lacking in any kind of payoff.

In the beginning we are treated to a long text opening which introduces us to Henry. This is not a good start to a game or a movie, and is especially confusing considering the great voice acting in the rest of the game. Henry’s wife has Alzheimer’s and he needs some time alone to think, so he takes on a position in the wilderness watching for forest fires. His only contact through the game is Delilah, who is positioned in a nearby tower.

There really isn’t much to this game. Lots of walking around in a first person and listening to Henry and Delilah talk. There are some options for different responses, but they don’t seem to have any effect on events except changing how the conversation plays out. There aren’t even many fires to watch out for (I think there were two throughout the game, which is pretty ridiculous), and the fire finder you are introduced to in the beginning is never used. But these types of games are more of a narrative framing for the story line, and although that story starts off with a lot of promise, it ultimately reveals itself to be unsatisfying as the answers to the mysteries are slowly revealed.

The story gets into gear when it’s revealed that people have gone missing in this area, and the mystery builds as it becomes obvious that Henry is not alone out in the woods. This is a great setup, and around about this time, the game has a great atmosphere of loneliness and uncertainty. When it is clear that Henry is being watched, there is a sense of paranoia when hearing the sound of wind rustling the bushes around you.

However, the story doesn’t really go anywhere, or do anything interesting with the ingredients it has. The mystery elements are the most intriguing thing about the game, but they lack any kind of a payoff and in the end will leave you feeling deflated. The answer to who has been watching you is explained, but it’s unsatisfying, in part because it is not backed up with a good reason as to why you were being watched.

The presence of red herrings doesn’t help, and serves only to build the anticipation for something that is never revealed. What’s behind the fence? Who was Delilah talking to earlier? These questions aren’t answered in any kind of satisfying way, and serve more to enhance the mystery, before being forgotten by the end of the game. The ending is completely anti-climactic, and in a game where the story and characters are the primary focus, this is a big problem. After all is said and done, I wondered what the point of it all was.

This is where some gameplay to back it all up would have helped, but unfortunately there just isn’t much to do, or even required of you. You don’t even have to respond to most of Delilah’s calls. There’s little to get out of exploring the environment, with almost all the items you find being completely useless, and the documents scattered around not adding anything to the story. At one point you’re given a fishing pole, but it cannot be used and is soon forgotten when you are told to “go to this place”.

The wilderness looks great, but is very “gamey” in its structure, with areas tapering off to bottlenecks which allow it to load the next area. I got annoyed having to rappel down rocks and climb over the same boulders and cliffs. These actions are only available in these areas too, and there are several parts where any reasonably fit person could climb over some of the rocks that block Henry’s progress. It’s also easy to get stuck on a rock or some bushes if you try to veer off the path.

A lot of the walking just feels like filler to take up your time, and keep you from realizing how little else there is in the game. This becomes obvious at one point toward the end when you must go from one edge of the map to the other and back again. Even considering the amount of back and forth, the game felt pretty short, and I usually play my games at a relaxed pace. Others online have said it took them 3-4 hours to complete, which doesn’t surprise me. In fact, if I were to list the things I actually did in the game, it would be surprising that it could take that long at all, and really is an indication of how much time you spend walking around. The game isn’t terrible by any means. The atmosphere is nice, although it is quite sterile and lifeless (I can’t remember seeing a single animal apart from the deer at the start). The graphics are quite beautiful, but the frame rate is inconsistent on the PS4, and there is that annoying level of detail popping in a few meters away (I can’t believe this is still a problem in this generation of consoles). The soundtrack is very sparse, but cues in on important moments with fitting music. The game is well made, it just doesn’t feel like much is there. There is no gameplay apart from walking round and triggering dialogue. It’s impossible to die or fail. When this bare minimum of gameplay is taken out of the equation, what we have is a story with a good setup that doesn’t really go anywhere.

I enjoyed Firewatch as I was playing it, when there was a sense of mystery and paranoia, but as I grew closer to the end I realized the best parts were behind me, and what I was left with was not wholly satisfying. I can’t see any reason for returning to play it again. The best part was the mystery of wondering what the hell is going on, but after revealing the truth, I’m not exactly excited to relive the experience.