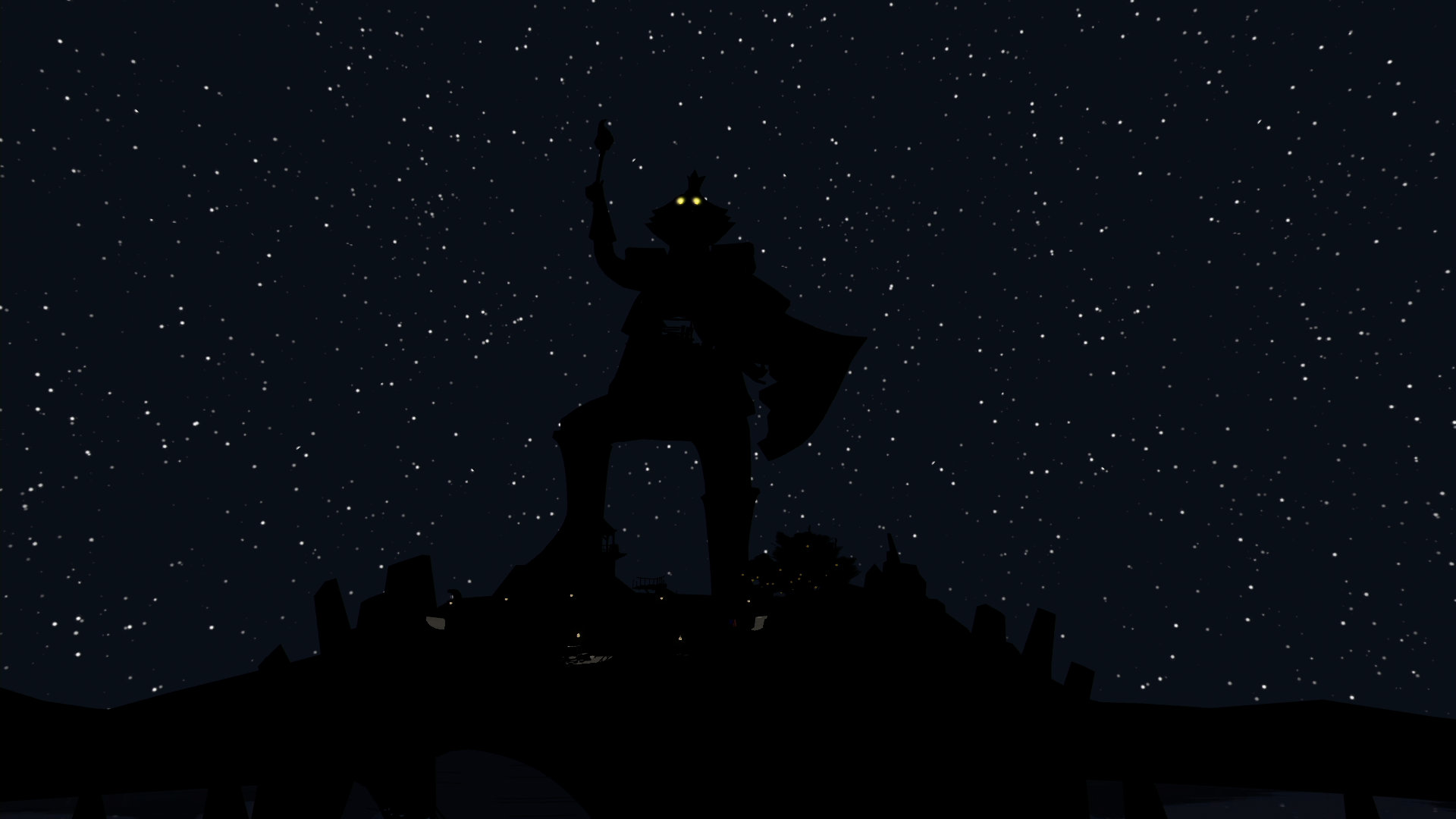 A truly brilliant game, that feels much bigger than it is, with only a few disappointments.

The Unfinished Swan is a beautiful, soulful title, with interesting mechanics that are intimately tied to the game’s unique visual style. It makes a valiant charge at perfection, that is thwarted by occasionally inconsistent pacing, inconsistent implementation of its unique gameplay mechanics, and an abrupt ending.

The Unfinished Swan was originally released in 2012 on PS3, and got a second pass at life with a re-release on PS4 and PS Vita in 2014. The Ps4 version, reviewed here, takes the game to its optimal presentation format – full 1080p and 60fps. It’s not clear that the game could become more beautiful from here – one of the first things you are struck by with the game is the purity of its minimalist art style.

In The Unfinished Swan, you play as Monroe, a young boy whose mother just passed away. She was an artist with a penchant for leaving her art unfinished, and your journey takes place within your favorite of her unfinished pieces – a painting of a swan. As the swan flutters away into the whiteness of the canvas, you follow, and in your efforts to chase down the bird you discover a whole world born out of her (or your?) imagination. The game plays out from a first person perspective, with traditional FPS-style mechanics crossed with a relaxed pace and the use of ink and water instead of bullets and grenades.

This is where The Unfinished Swan’s artistry and mechanics blend in wonderful ways. The game begins in a blank space, where the blinding whiteness is both terrifying and soothing. But there is hidden geometry there – a physical world that you simply cannot see. By splattering the world with ink blobs, you reveal the geometry and the path forward as you try to track down the swan. This first stage of the game has the most gravity – stumbling through a surreal whiteness with soft sounds of wind-chimes and water hinting at a physical world around me that I cannot see was an experience that is tough to describe. It had the same magic that I felt back in 1993 when Myst teleported me from a gaming climate dominated by 16-bit sidescrollers and vectorized 3D into the pages of a book with incredible ambiance. What is striking about this first stage of the game is the interplay between visuals and mechanics – you have to splatter the white world with black ink in order to see, but too much black is just as bad as too much white. It reminds you that contrast is key to human vision; your ability to navigate the world requires an artistic balance of leaving some space painted and some unpainted, some space black and some space white. 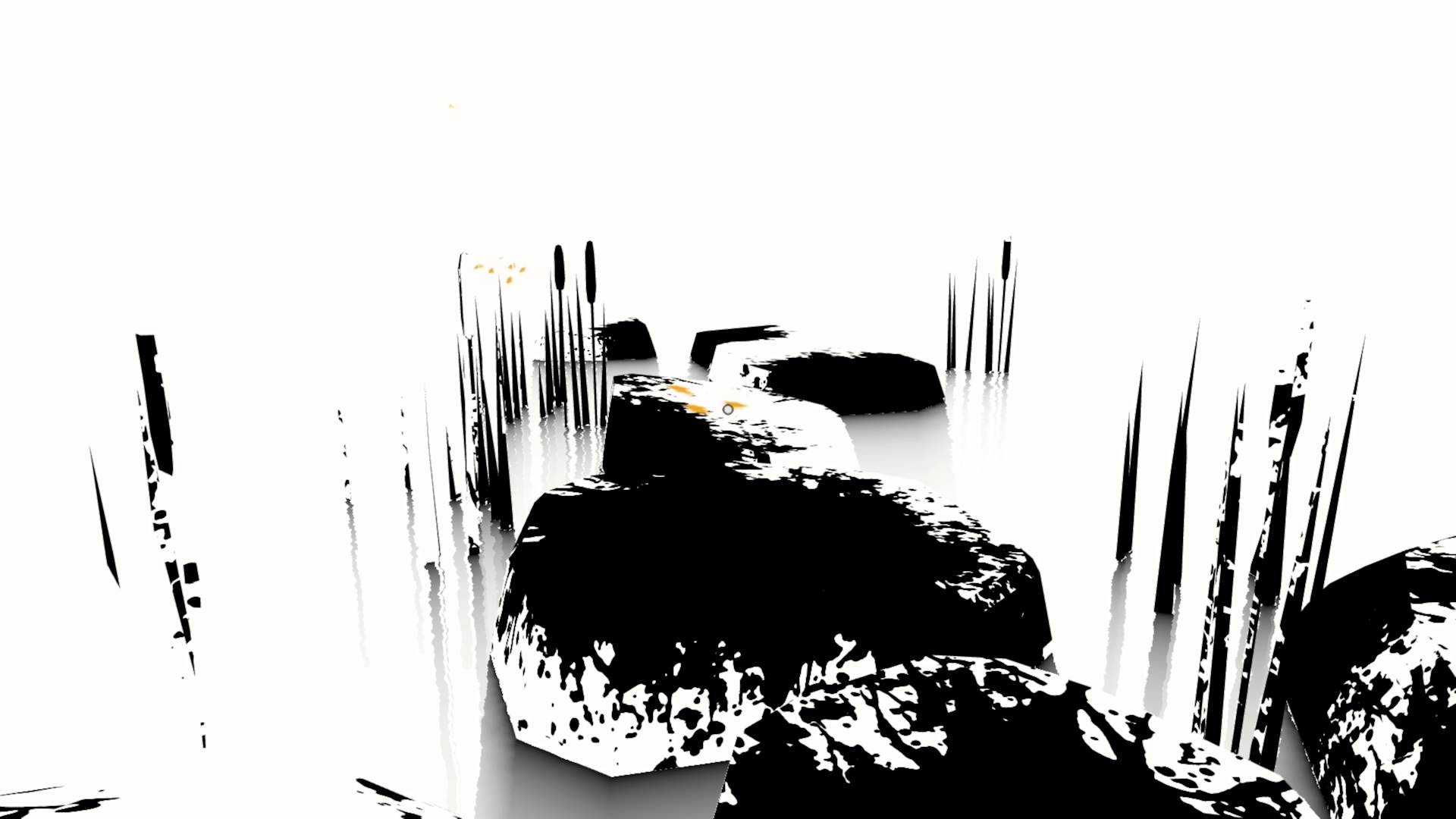 As you progress through the game, the environment shifts around you from a blank canvas to one where the geometry is visible. This is the transition that a lot of reviewers have penalized the game for over since its release. And I agree to some extent – the mystique is undeniably reduced when the world becomes visible and your “gun” shifts from shooting ink to shooting water. But the minimalist artistry remains, and the use of the water gun remains creative. In fact, the developers use this transition to mix things up in the mechanics of the game – the options available for traversing the world shift along with the medium (ink vs water), and for this reason I believe the game holds its own through the transition into a visibly rendered world. 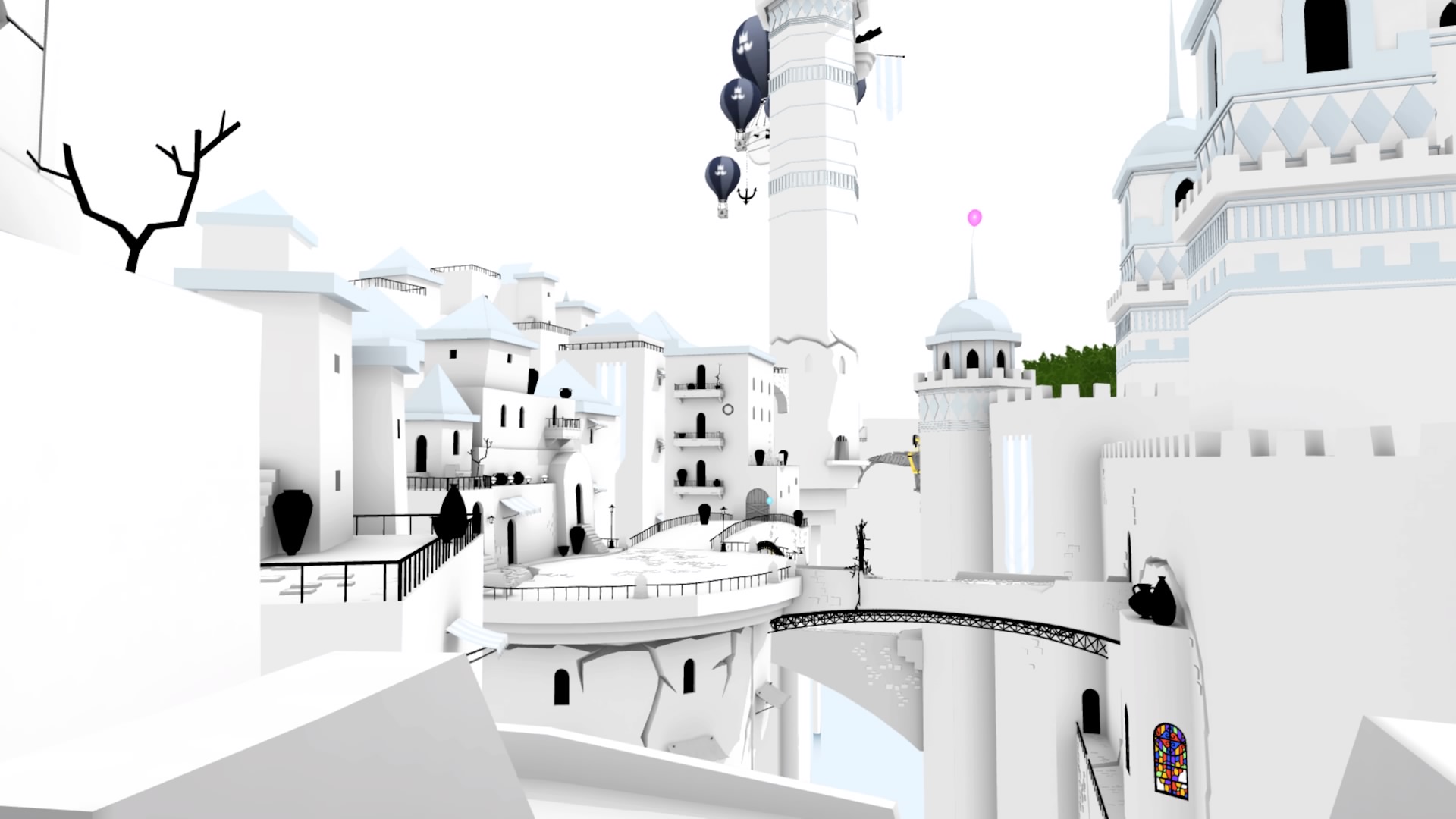 Even when visible, the world has a striking visual style

In fact, over the course of the game it makes several of such transitions, each time with a palpable visual change accompanied by a twist to the mechanics. Which is pretty awesome. The game works hard to keep itself fresh. Which is pretty admirable given its short – but not atypical for indies – length. Far longer games incorporate far less variety as they progress. 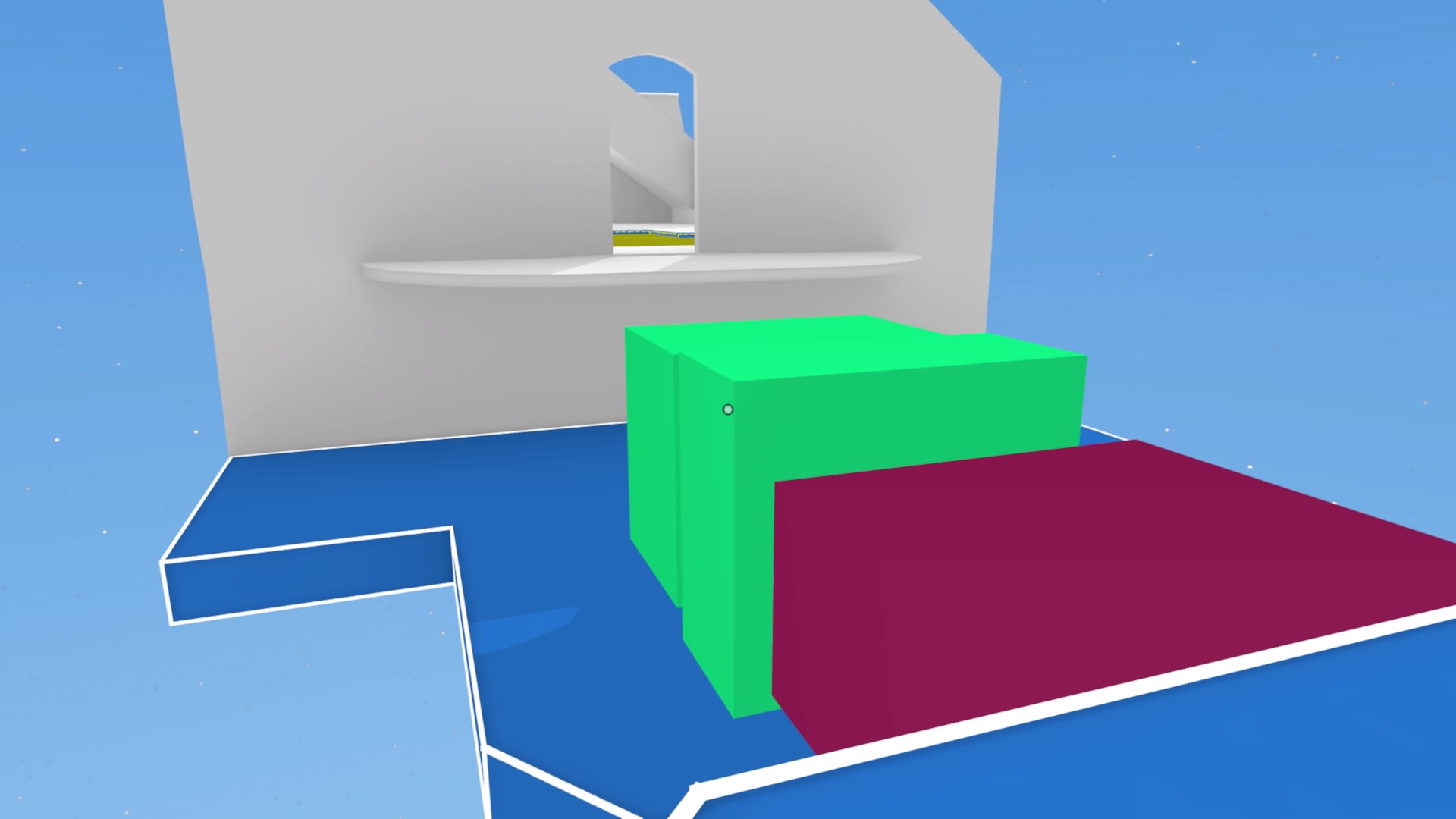 where the… we’ve come so far and things keep changing!

One issue that I want to elaborate on is the pacing. This game is not hard. At all (although some hidden collectibles sure can be really difficult to find!). Its greatest strength is how fully it envelopes you in its world – as mentioned at the outset, there’s a surreal, Myst/Riven-like quality to the game (but more cuddly), and the ability to explore the environments with the painting mechanics is paramount to that experience. So it was very disappointing that there were several stages where you were forced into a timed “platforming” sequence. I generally look upon timed sequences with distaste, but the real issue for The Unfinished Swan is that they comprise a significant chunk of a couple of the unique and fascinating environments you encounter. What this means is there are some areas in the game that you simply are not allowed to explore. These sequences disrupted the pace of the game, and it would have been preferable to at least provide some means to explore those areas further after the sequence terminated (which would also make the game longer)

Another issue is that some of the new twists on the painting mechanic are so brilliant and game changing, that others just… underwhelm. There are some stages in the game that just don’t make as compelling a use of the latest twist. It’s not that they fail – but these stages are dimmer for failing to live up to the brilliance of others.

Lastly, the game ends incredibly abruptly. It kind of wraps things up… sort of… and there is a very unique and interesting interactive credits sequence that is a part of that. But the game’s adorable (but simple) fairy tale story really goes out on a whimper, and does so quickly. Fortunately, it DOES wait until the last minute for this to happen – that is, the narrative is well paced until the last moments of the game.

Overall, The Unfinished Swan borders on a masterpiece. In some ways, I think it’s a more compelling package than classics like Journey – it offers more gameplay, more variety, and artistry that is second-to-none (provided you aren’t opposed to a largely gray-scale world). It feels like a bigger game than it is. What holds The Unfinished Swan back is perhaps what also makes it so great. Frankly, games like Journey do a lot less with their time in your hands. But what they do is executed almost perfectly. The Unfinished Swan does much, much more than many games of its size, and this is largely to its credit. But where it takes some risks it also sometimes stumbles. This may be my favorite indie game that I have played in recent memory, despite it offering up a few disappointments that other titles sidestep by playing it safe. 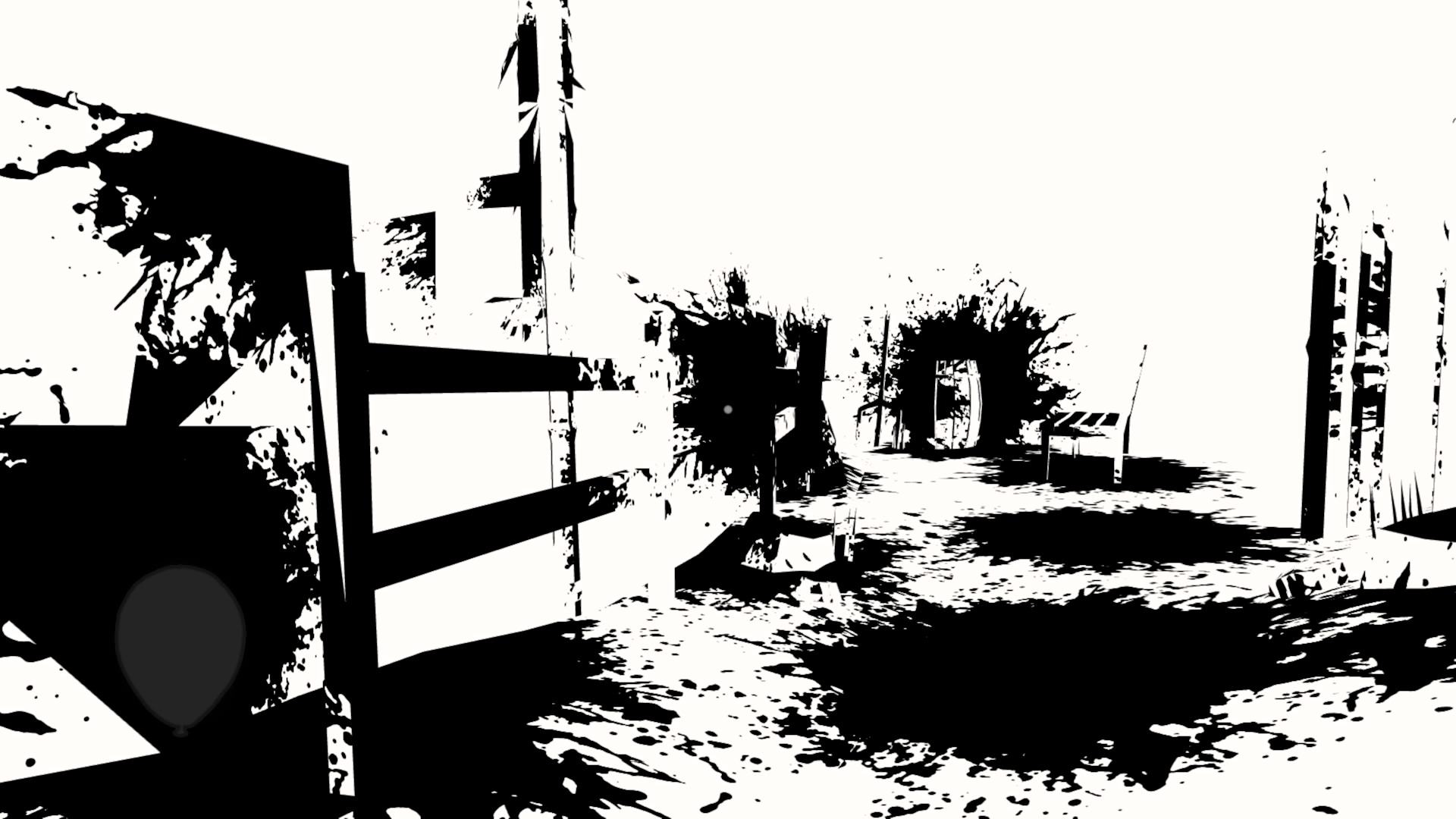