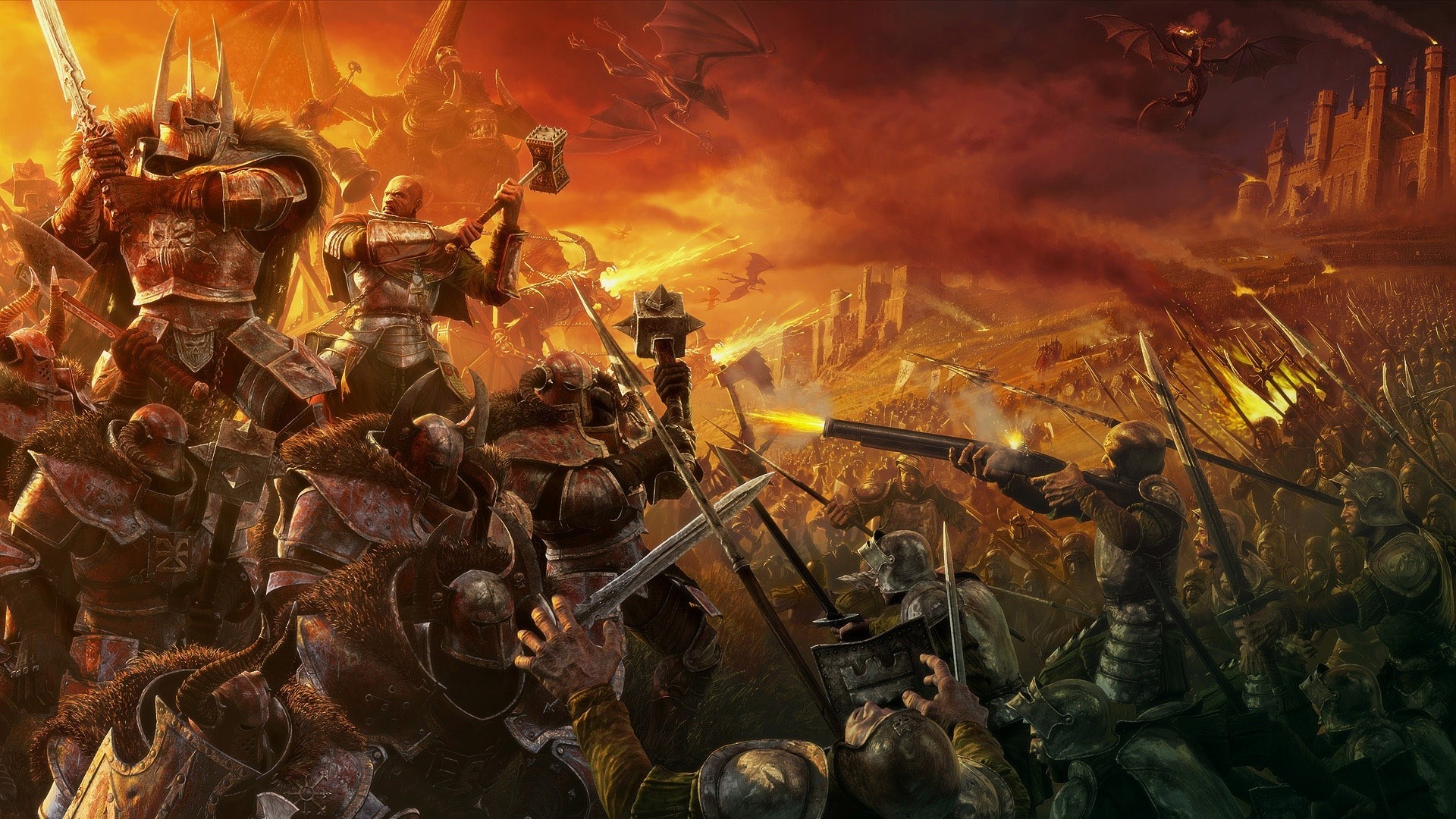 Total War: Warhammer is a rich strategy game experience, appealing to both veterans and newcomers

Total War: Warhammer (or, as I think many of us are referring to it, Total Warhammer) is a delicious melange of The Creative Assembly’s computer strategy game mechanics and the lore and factions of Games Workshop’s Warhammer Fantasy franchise. The timing of this computer game’s release couldn’t be better, because the table-top progenitor has been effectively decommissioned. Of course, if Total War: Warhammer was awful or even mediocre, its existence would be of little solace to displaced Warhammer Fantasy fans. But thankfully, that is not the case.

The basic structure of the game, for those unfamiliar with the Total War franchise, resembles that of Heroes of Might and Magic (HoMM) and Age of Wonders (AoW). First, players engage in turn-based management of their burgeoning empire via a world-map interface. Here they assign production to cities in under their control, engage in diplomacy and trade with other factions, and maneuver armies and heroes for defense and conquest. 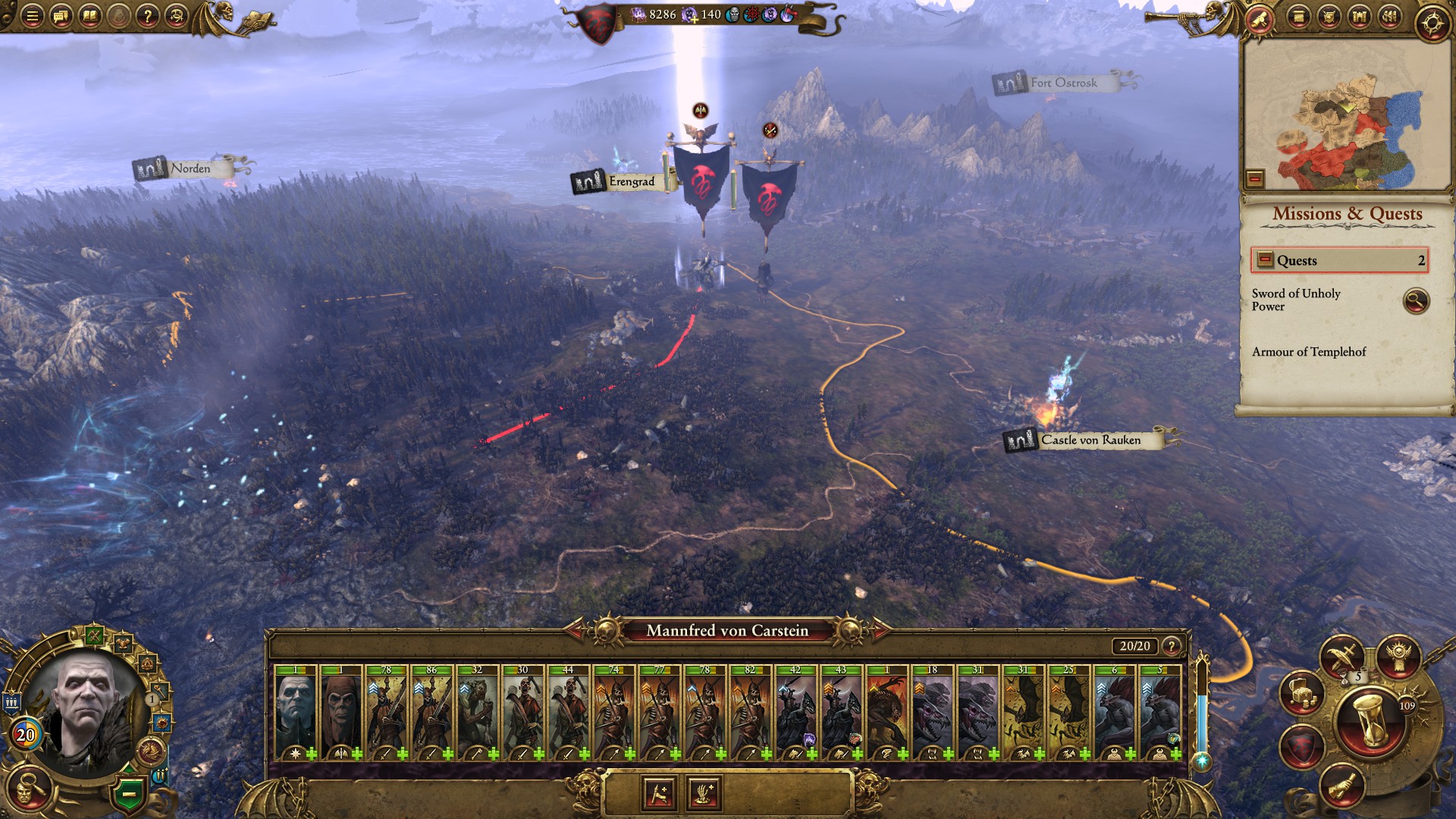 The campaign map: von Carstein’s army pushes north into the lands of mortal men, already ravaged once by the forces of Chaos

When combat is initiated, players descend into the second level of the game: large-scale real-time combat. This is where Total War: Warhammer (and the TW series in general) diverges most sharply from the HoMM and AoW take on strategy gaming. This is also where the Warhammer premise for this title really asserts itself. Because these real-time battles, at times reminiscent of the scale of the venerable Cossacks games, involve armies that are tangibly different from one-another (at the time of this writing, the playable factions are Chaos Warriors, Dwarfs, Greenskins, The Empire, and Vampire Counts. A new faction – Beastmen – will soon release). 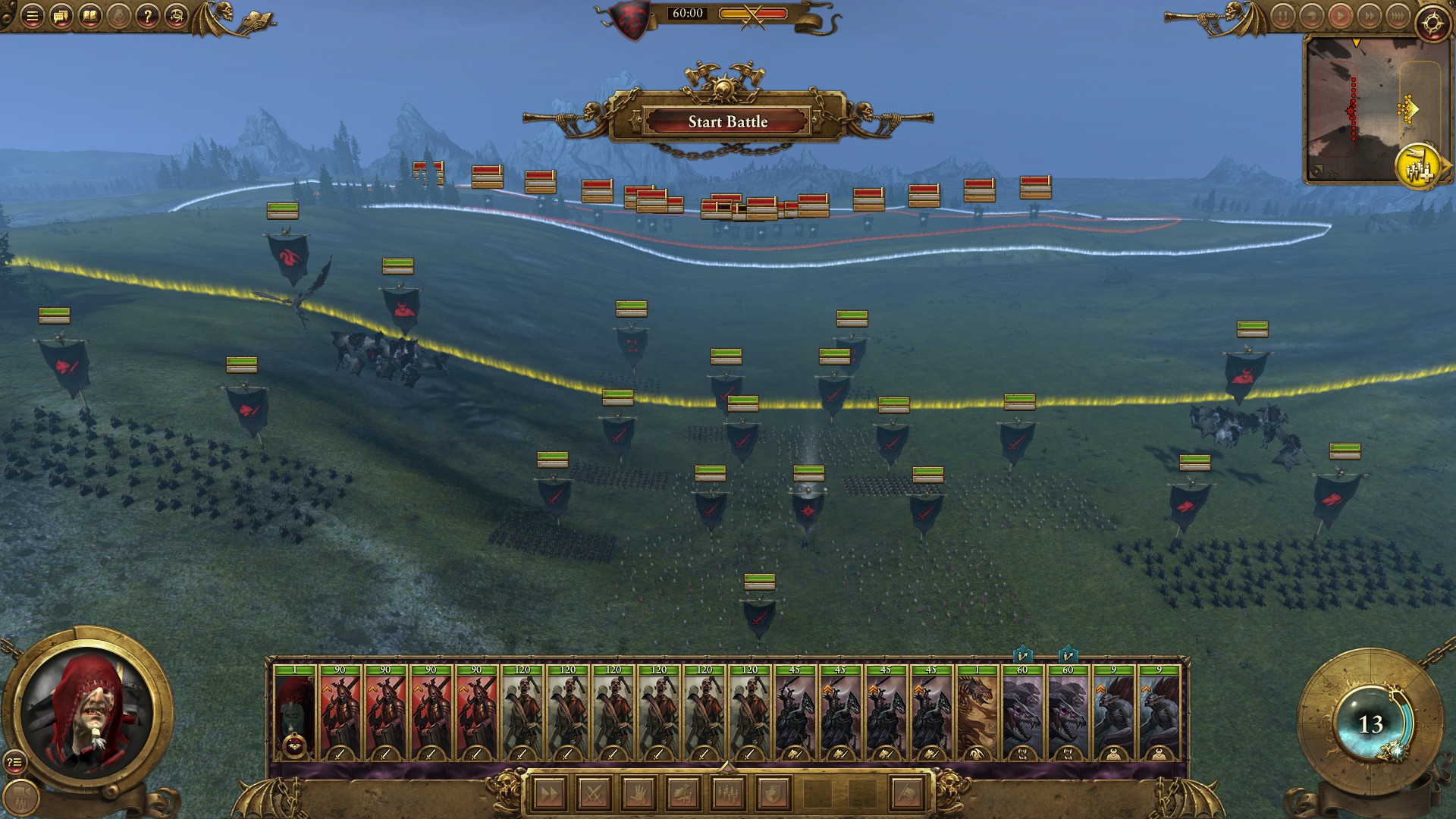 Preparing deployment formations before real-time battle: that’s a lot of units, and this is with just one army on each side of the conflict

This is part of what makes this a good Warhammer video game, a distinct take on Total War, and what encourages you to experiment with deeper strategy. For example, Vampire Counts lack the ability to field a meaningful range-unit presence in battle. On the other hand, they have fearless, and fear-inspiring units. But these units literally begin to crumble when the leadership binding them to the land of the living is routed. Qualities like these mean you really need to think about how to engage an enemy with strong range units, fast units, and/or an ability to effectively target your leaders.

Likewise, Dwarfs (my favorite faction) must be very defensive. Their stumpy legs, but incredibly powerful melee and missile forces, encourage clever use of terrain to draw a more-numerous and mobile – but less robust – opponent into combat on your terms. Taken together, the unique characteristics of the armies in Total War: Warhammer add strategic variety that really strengthens the game, and I find it invigorating trying to not only master the best strategies for your race, but the strategies that are dependent on which opponent your forces are up against.

And it must be said – excellent visual variety comes with this package as well. The individual units are lovingly crafted, well-animated, and it is a joy to zoom in and watch them engage in brutal combat. 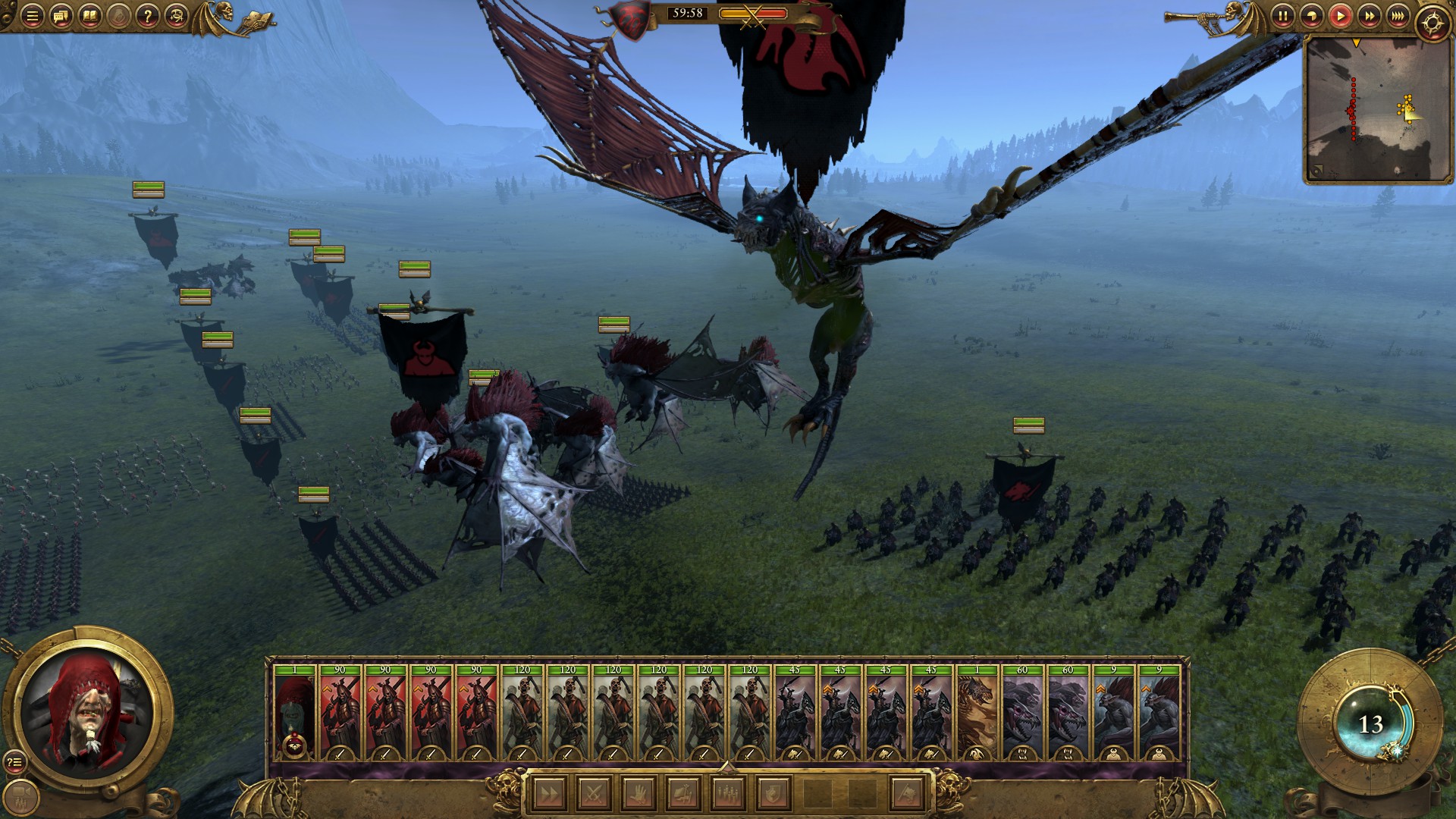 I don’t think I can cover all of the game’s mechanics. But I can provide some orientation to how the game is structured and the main mechanics that need to be juggled.

On the campaign map, a typical turn involves

1) Evaluating your income. This is critical. Fielding armies costs money each turn (or an analogous statistic; Vampire Counts use Dark Magic). Upgrades to your cities also cost money and are necessary for expanding the types of units you can build along with gaining other administrative advantages. If you don’t have enough income, consider scaling back the size of your armies, building income-generating buildings, or waging bloody war – the spoils from defeating an army or looting a city can provide a huge boon to your coffers.

3) Evaluating your diplomatic standing and goals. Diplomacy is fairly simplistic in Total War: Warhammer – by and large it involves simple military treaties, initiating trade relationships for an income bonus, and coordinating war targets with military allies. There are a few variants on these options, but for the most part you will use diplomacy to stave off war with someone until you are ready, secure lucrative trade deals, and beg for mercy or help if your back is against a wall.

4) Army movement. There’s a little bit of Chess in this – you do not want to move all of your armies North if it means exposing a juicy belly of your empire to Greenskin invaders from the South. You don’t want to send an isolated army into hostile territory if you see multiple enemy armies positioned to descend on you at once. Total War: Warhammer’s AI is fairly competent in this regard – enemy armies actively avoid being tag-teamed by your armies, and actively pursue tag-teaming yours. They also seize geographic openings to sprint deep into an undefended stretch of your territory and wreak havoc. This same comment applies to the real-time combat – the enemy is pretty good at flanking you, and you can see it actively and aggressively rearranging its troops in response to your own flanking attempts.

This is pretty impressive coding work, although sometimes the AI inexplicably falls flat in this regard. Whether this is deliberate – aimed at throwing variety into the mix – or whether this is simply the AI buckling under the weight of the game’s complexity, I cannot say. It is infrequent enough to provide for a challenging single-player game (really – on Normal and up it is very easy to get overrun and destroyed until you figure out what you are doing. If you are new to Total War, expect to either start on Easy while you learn the ropes, or to be comfortable losing as you try to get your sea legs). 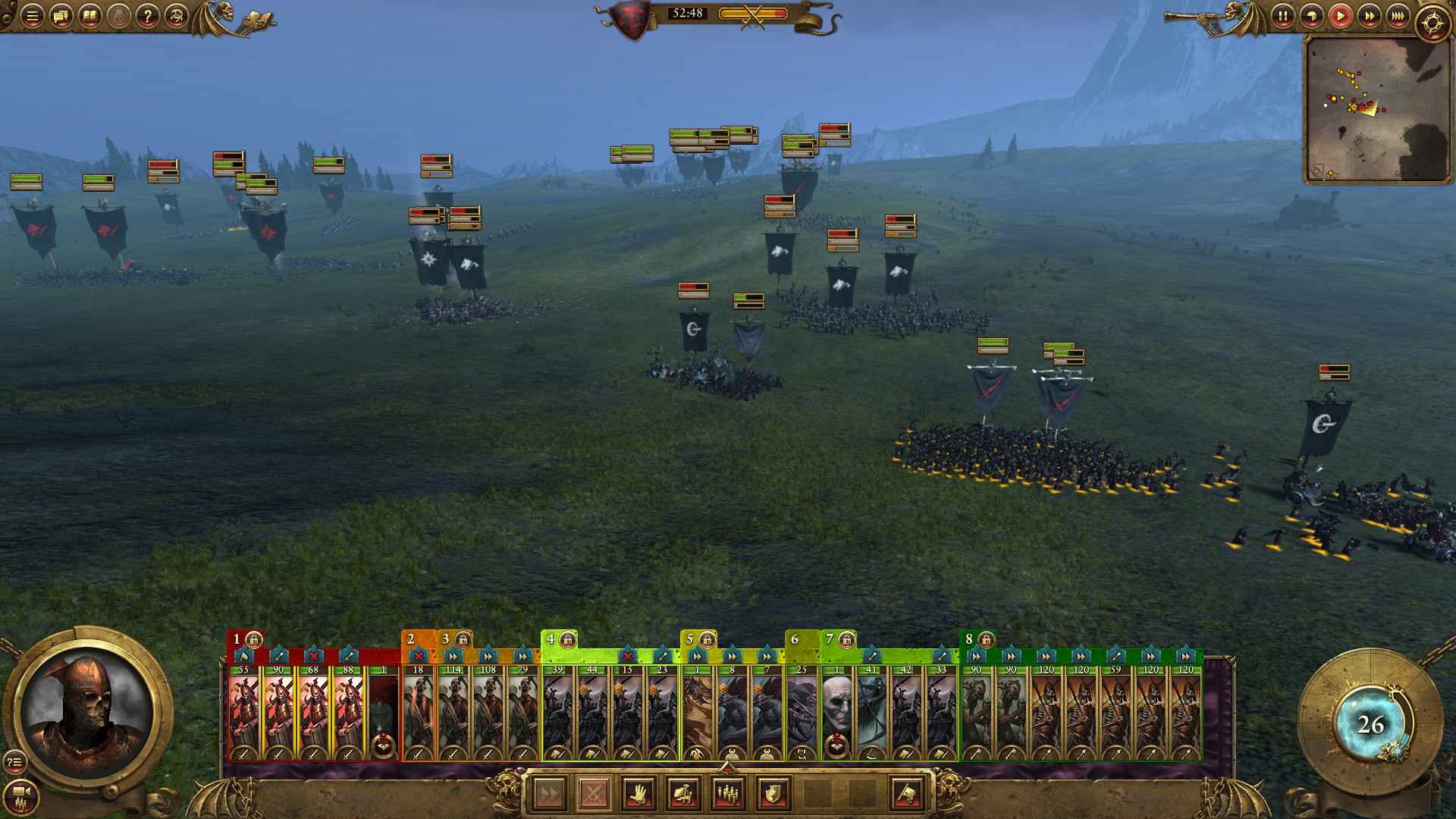 Units scrambling to new positions in the thick of the melee, all artful flanking and deployment lost by this point in the battle

In real-time combat, there are many mechanics as well. These contribute to a deep strategic experience: there are distance and elevation mechanics affecting unit visibility, speed, and the range and efficacy of projectile units. There are charging bonuses. There is fatigue. There is morale and leadership (which can cripple your units when it fails). There is magic for some factions and units:  drawing on a pool of magic determined by character stats and random luck (the Winds of Magic), characters can heal, boost unit morale, strike fear, increase resistance to damage, or cast various types of offensive spells on either individual or multiple enemy units. There are large flanking bonuses, which also carry over into running down fleeing troops.

All in all, there are too many mechanics to cover (did I mention attrition, unit healing, tress-passing penalties? Hero actions against territories and units? No?). For the purpose of this review, let it suffice to say that there is an incredibly deep and rewarding strategy experience to be had. Importantly, most of the mechanics work together extremely well. There were some quirks that were promptly fixed in the first patch, and there are probably more to address, but by and large it has been a smooth launch.

My biggest complaint with the mechanics is that due to the scale of the battles, it is very easy to lose control over how all of the mechanics are interacting once combat gets underway. When there are multiple armies and lords on the field, it simply isn’t possible to monitor and implement all the potential bonuses and spells with maximum efficiency. This means you will take losses that you know you could have avoided if you had been able to pause and micromanage every aspect of the battlefield (note: you can pause at lower difficulty levels). But this is an exercise in “letting go” that every general must surely face. Unfortunately, since the AI is imperfect, you can’t trust your troops to make the best decisions when your attention is elsewhere (sometimes they won’t even engage with an enemy in front of them once their last foe was defeated unless you tell them to…).

This brings me to…

There are some quirks with the game’s AI, and some balancing issues are being tweaked (a clear example early adopters could point to is the substantial improvement made to the Vampire Counts healing/resurrection spell Invocation of Nehek with the first patch). 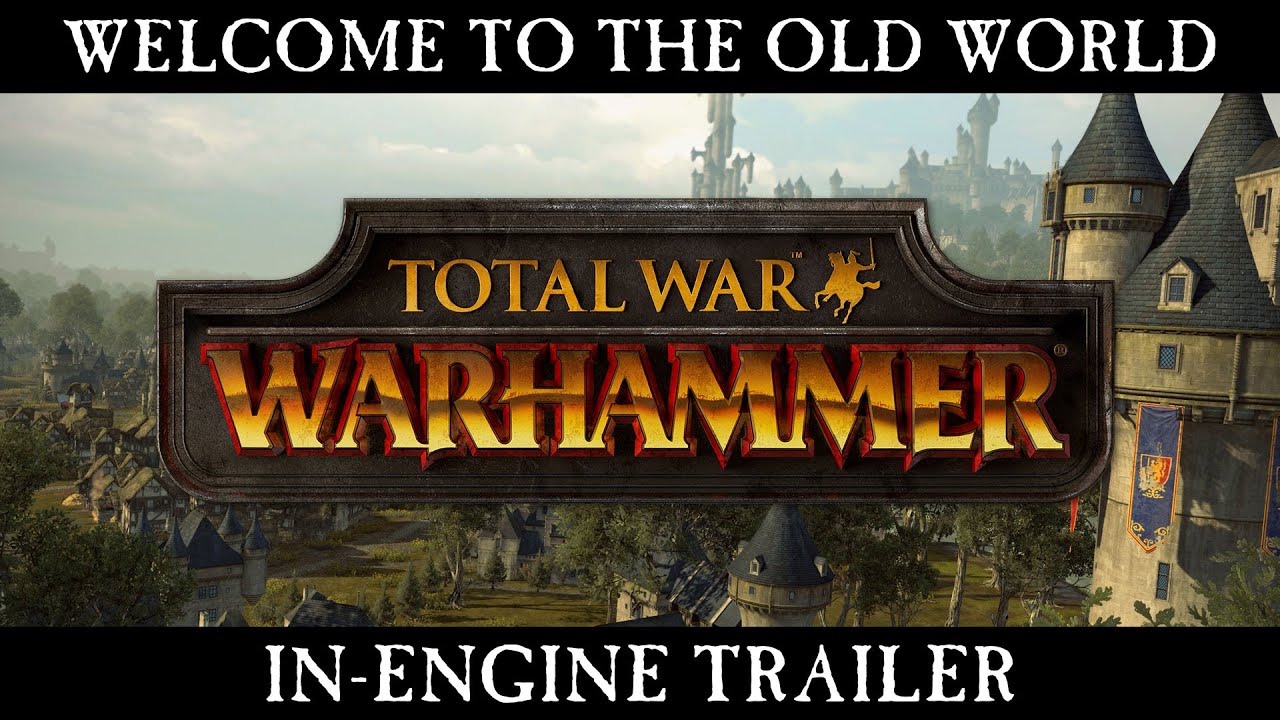