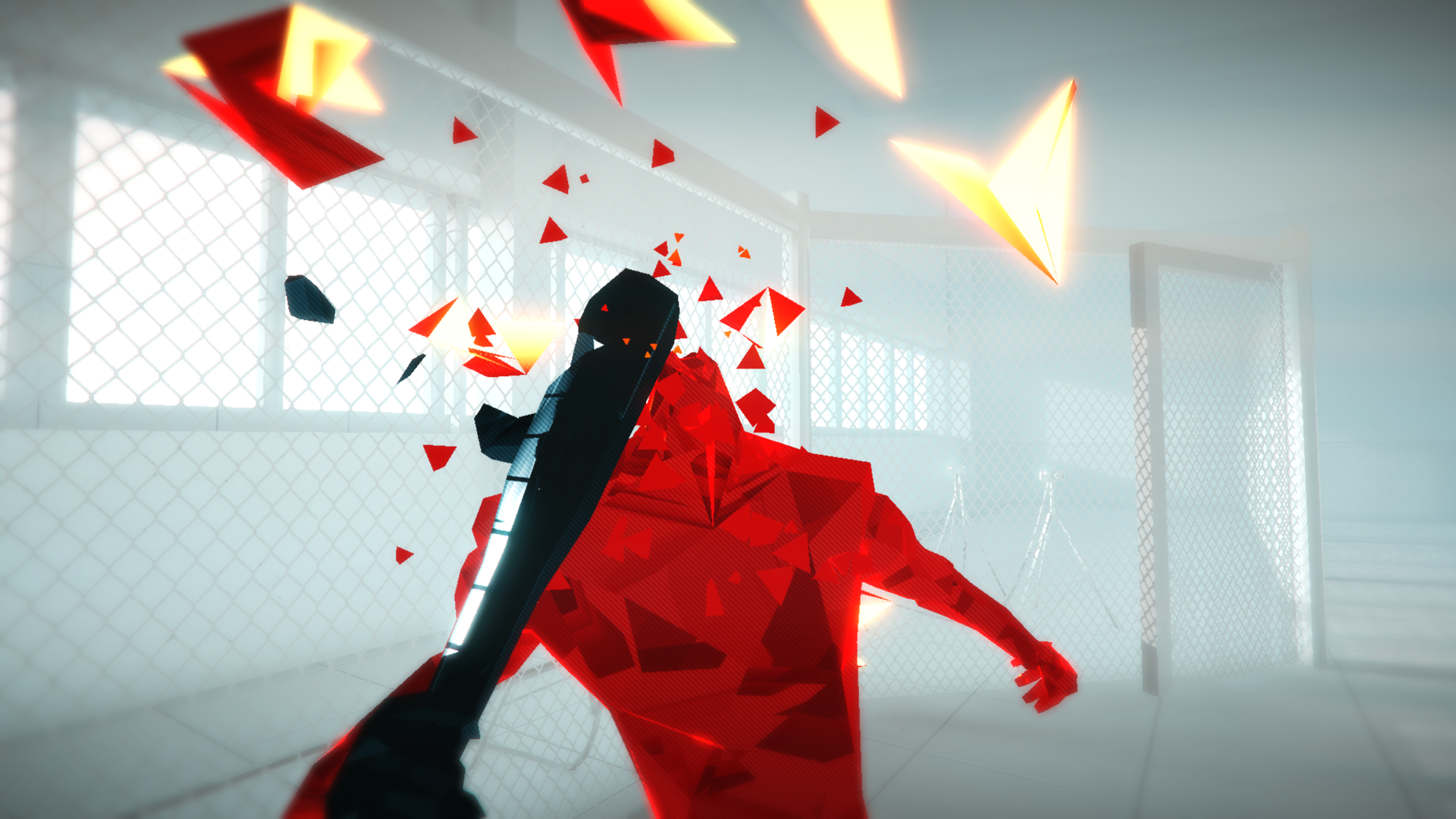 Edge of Your Seat in One Sitting

We’ve had our fair share of bullet time in video games, but this one takes it to another level. Indie puzzle shooter Superhot, despite the slow-motion action, is an edge-of-your-seat adrenaline ride that is over in just one sitting.

I know what you’re thinking: “Hey Mr. New Critic, you’re telling me that I should buy this $25 game that I can finish in two or three beers?” It’s a fair question. My real goal is to only tell you just enough that you can decide that for yourself, but not enough that I’ll ruin the sense of discovery you get if you do plop down that hearty cash.

Superhot is a game within a game. You play as a hacker who downloaded a bootleg virtual reality shooter called superhot.exe and entered The Matrix… except this matrix has polygonal minimalist graphics. Everything stands out against the clean white backdrop: If it’s red, kill it. If it’s black, kill with it.

Time slows to a crawl when you don’t move, but speeds up whenever you perform any action. It allows you to see bullets in mid-air, dodge them, and return fire in what must seem like the blink of an eye to the enemies.

Have you ever been stuck in a hopeless situation in a shooter, surely to die, but against all odds you improvised your way out of it with a cunning move and survived by the skin of your teeth? Since a word to describe this feat doesn’t exist, I’ll invent one: Chabanarf. This game is designed to the last polygon to give you as much chabanarf moments as humanly possible. Each weapon you pick up is limited use, so you’re constantly forced to come up with different ways of getting them from your opponents. Every action you take moves the clock forward a bit to make you consider the consequences. Every mechanic puts you in dire trouble non-stop so that as long as you can be creative, you’ll find a way to pull chabanarfs.

After each level, you’re treated to a real-time replay of what you just did. Bask in it, you marvelous beast you.

If I’ve sold you on the game, brace yourself because now is the part I tell you what could be the deal breaker. Like knowing the girl you like has terrible fart sessions, the hope is that if you’re still into Superhot then it means the game is for you. The biggest potential flaw is how quickly it’s over.

You’ll finish the story campaign in about 2 hours depending on your skill. There are challenge modes to keep you a while longer, but you’ll stop seeing anything new from that point. Portal was about that that length and it felt just right, I would argue… but then again Portal sort of came for free in The Orange Box.

Money means different things to different people. I’m sure many critics who got review copies for free didn’t even mention the cash value. If you find yourself with more money than time, buy this instead of buying microtransactions to skip grinding $60 games. Otherwise, just wait for Papa Gaben to bless it with the Holy Staff of Discount.

You should buy this game if:

You should wait for a discount if: