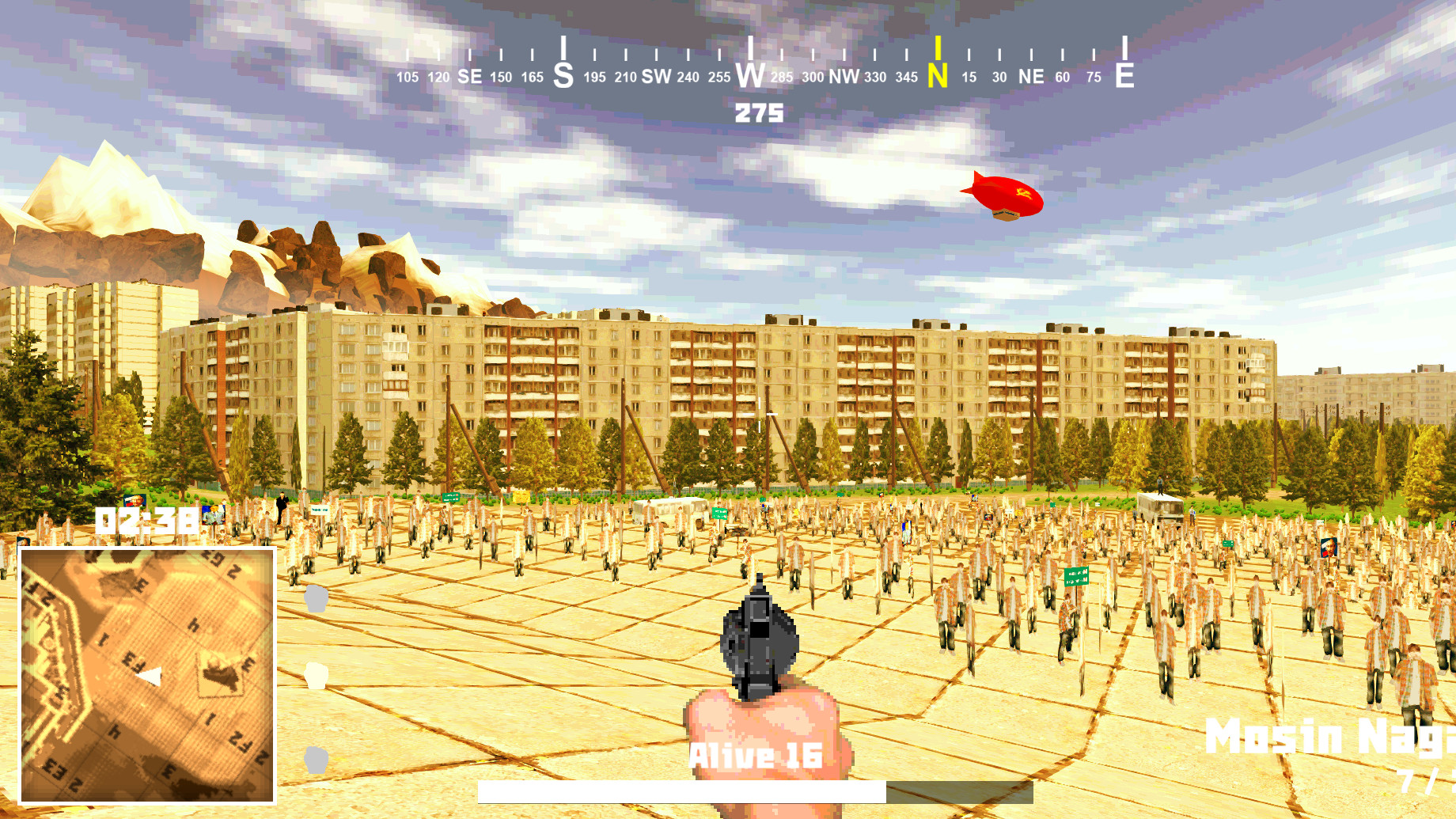 A disappointing venture into russia

The older versions of DOOM has an extremely active modding community; Every day a new WAD is uploaded to message boards and they usually involve elements from the latest game reimaged in Final DOOM or DOOM 2. Of course, it wouldn’t take long for a battle royale WAD to make the rounds but who knew the game would be packaged as a standalone product and shipped onto Steam for a mere dollar?

That’s the situation RUSSIA BATTLEGROUNDS finds itself in. A 32-player battle royale title that presents itself with a simple goal; kill all players. Well, you would if there were any players in the first place. The game has a non-existent player base with your only option being to play with bots which, in all fairness, isn’t a bad substitute as they’re not even part of the game. No, it’s the Ultra Bots.

Ultra Bots are random enemies (that come in multiple forms including military officers and slavs) that trail you around. Want to find a weapon? Forget it, you’ll have to rip it from the dead hands of that soldier spewing Russian dialect at you. To add insult to injury, the majority of enemies drop nada which leaves you having to resort to your makeshift bottle shank until you can find a beer or pack of pills to regenerate your health. 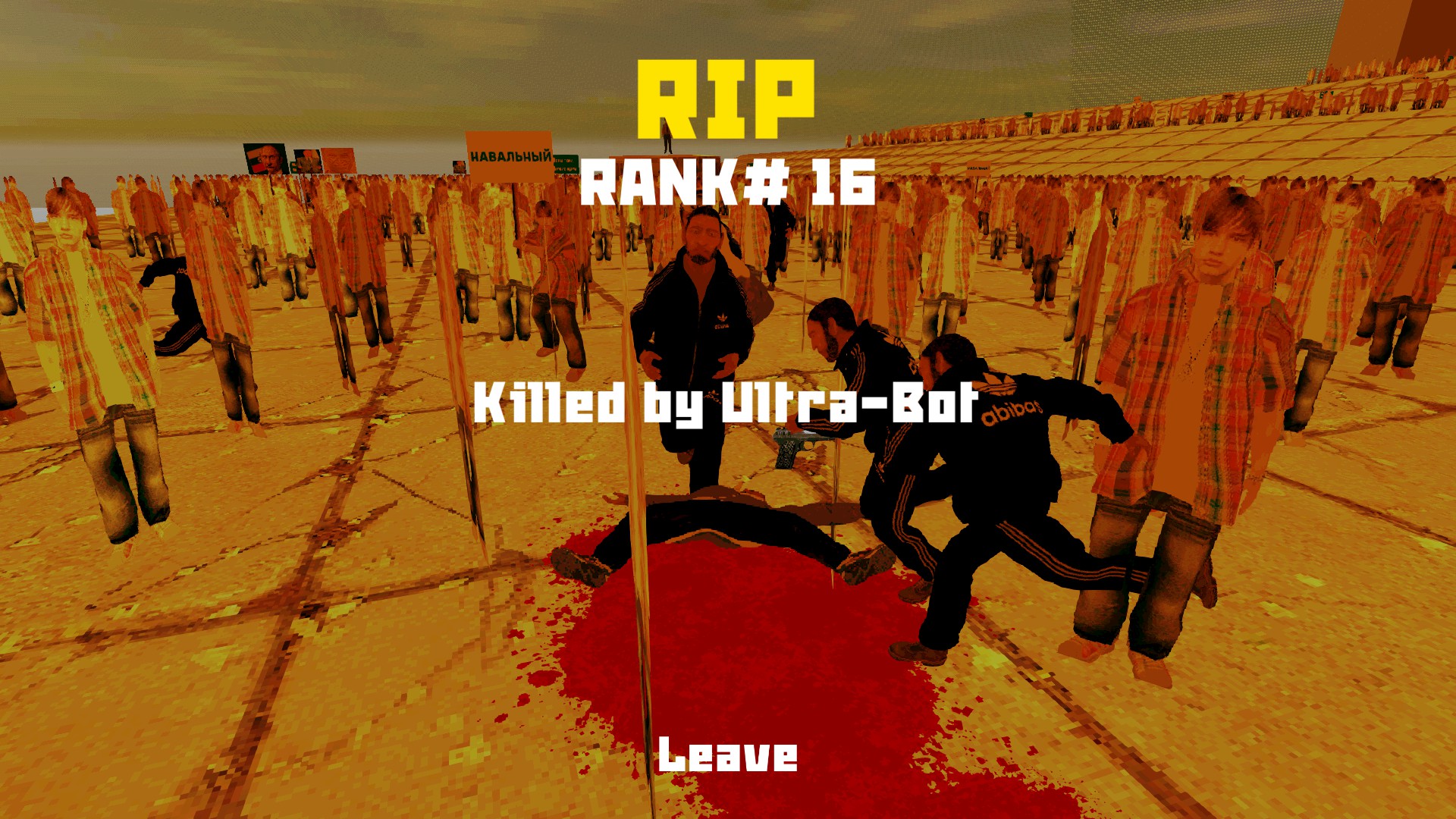 If (and that’s a big if) you manage to pick up a gun, you’ll find that the ammo counter is broken leaving you to play a guessing game of whether you have slugs in the shell which can often to lead to early defeat in most firefights you engage in. On several occasions, I found that bullets didn’t even register when firing them bang slap in the middle of an enemy despite the hitmarker telling me I had a clear shot.

Despite the game practically being unplayable, RUSSIA BATTLEGROUNDS does have a charm. The general look of the game is a welcoming sight for any DOOM fan; the haziness of a sun-stricken Russia has a warm and fuzzy feeling that I can’t explain in words. I would love to explore the hefty map if it wasn’t for the random hordes of slavs approaching from every angle who don’t even count as one of the 32 players. It’s also populated with some strange characters from headbanging slavs to cloned protestors, the game doesn’t fall short in the world detail department.

Ultimately, RUSSIA BATTLEGROUNDS is a meme game. Its vulgar inhabitants and unfair loot system are not to be taken seriously yet I still feel it should. Sure, you could argue the battle royale genre has been done to death but there’s something special about RUSSIA BATTLEGROUNDS. Maybe it’s the DOOM-esque graphics, maybe it’s the communist blimp that you awkwardly jump out of. Either way, it’s an unplayable game. Hell, I’d even go as far to say it’s not a game. It’s a meme and memes are in abundance on Steam (until they’re taken down for copyright issues) but even for a meme, this is one you might want to give a miss.