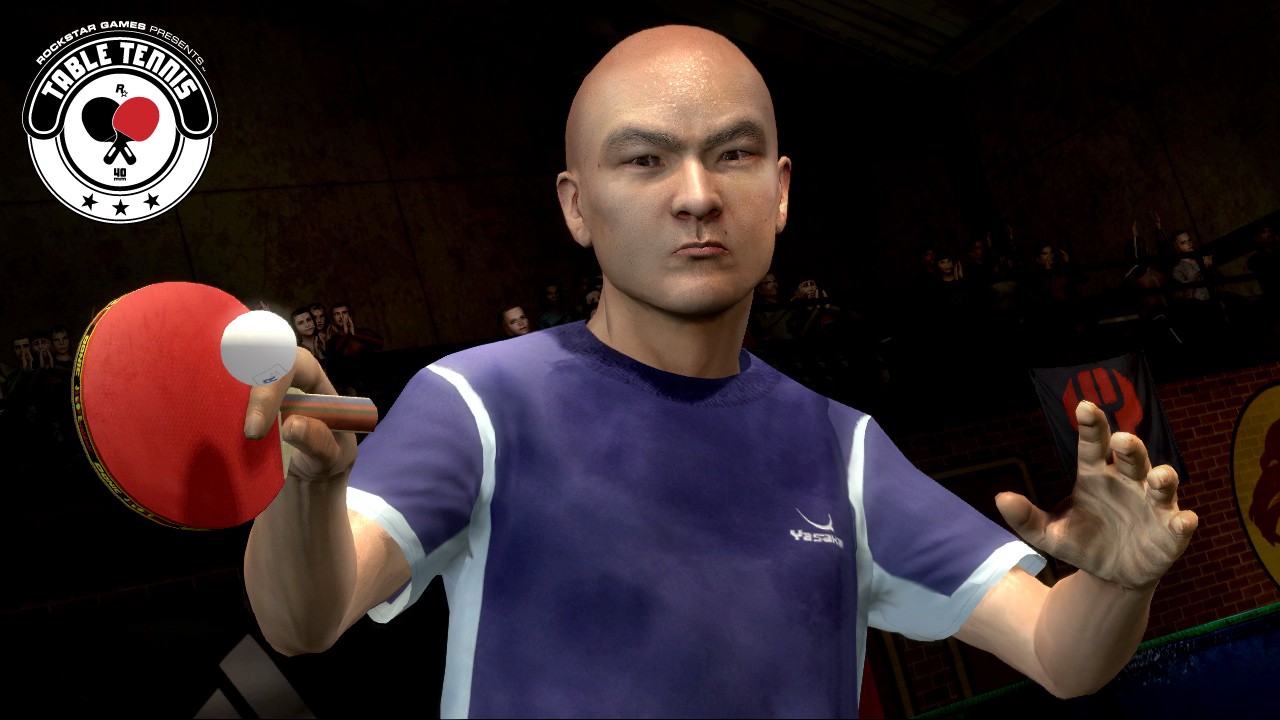 Rockstar Games Presents Table Tennis will strike most as a bit of an odd bird when they consider it was created by the studio best known for mayhemic, violent, open-world games. To those I say: Realize that GTA is an ultra-rich simulation of a city, and Rockstar Games Presents Table Tennis is an ultra-rich simulation of ping-pong. Also, remember that Rockstar makes energy drinks, so they’re just fuckin’ weirdos, anyway. Think about it: If all the people who drink energy drinks are freaks, what does that say about the people who create them?

This may very well be the first game I ever saw with ‘next-gen HD graphics.’ I remember playing Rockstar Games Presents Table Tennis at a Target kiosk back when I was still a kid: It must have been in ’06 or ’07. I probably didn’t make it past a rally of two — given that I was only accustomed to the shape of a Dualshock 2, at the time — but I was still dumbfounded by both the graphics, and the $60 price tag.  Leaving the kiosk/Target, I felt that the future was racing away from me and my parents’ puckered-tight gaming budget. And would you believe that for every 15 minutes of video game time — V.G.T. for short — my mom would make me do two hours of intense algebra study? I mean, c’mon, that’s messed up.

A few years ago, I bought this game from GameStop for 99 cents. That’s right, for the price of a McChicken, you too can experience Rockstar Games Presents Table Tennis. For years it sat on shelf collecting dust, a relic of my repressed childhood, but today I’m here to review it for my rabid fans. And the best part is my mom can’t say a damned thing about it.

I would also like to note that you can use this game to heat your house during the winter. I played this game on a launch model Xbox 360, and during my sessions it wasn’t unusual for my palms to sweat considerably from the hot, dry air blasting out of the 10+ yr. old console, the intense, mechanics heavy/visceral gameplay, and my self-diagnosed GAD from years of rigorous, education-based trauma.

I’ll cut right to the chase: The best part of this game is when you get a long rally going, and the EDM starts bumpin’ to the rhythm of the strokes. When that happens, it’s hard to not feel emotionally and physically invested. It’s in these moments where your brain tends to forget you’re playing a ping-pong game and that you hate the woman who raised you, and instead it focuses on timing and the excellent audio cues, most notably — the sound of the crowd’s gasps and cheers while the plink of the little plastic ball rings true. Oh, and when your focus meter is full and you hold down one of the spin buttons and the triggers, and your character charges up to absolutely smash the tiny, white thing onto the other side of the table, past the computer’s soulless face and into sweet oblivion — that feels good, too.

Aesthetically, Rockstar Games Presents Table Tennis is a cut above most 99 cent AAA sports games. It plays with minimalism and pacing in ways that other 99 cent games do not even bother considering: One moment the arena can be as silent as our tiny dining room where I practiced synthetic division for excruciatingly long periods of time while the other neighborhood children played outside, and the next moment the crowd and music are humming along enthusiastically to the speed of the match. Between points, your character will pump himself/herself up with frustration or excitement depending on your current performance, and each character (though there are few) possesses unique dialogue and animations. Their personalities are intense and brimming with attitude, which is hilarious in light of the fact that they are getting worked up about ping-pong. Even the title, Rockstar Games Presents Table Tennis, is laughably self-serious. Or is it self-aware? In conclusion, Rockstar Games Presents Table Tennis is a black comedy. I believe it is the Slaughterhouse V of sports games.

There’s a good variety of different ways in which your character can strike the ball. You can lightly tap the thing or place considerable backspin on it. As I mentioned, if you charge up your swing, you can also do a kind of overhead/cross-table smash. There’s also an option for using the right analog stick to control your shots ala NBA 2K or Fight Night, but I found myself preferring to use the face-buttons, instead. Additionally, the lack of a toggle for instant replays breaks up the flow of the action, and sometimes controlling your character can feel sluggish — almost as if you are moving underwater, which is often how I felt when my mother would force me to study stupid math for hours and hours on end, and I wanted to drown myself; it was so boring.

I give this masterpiece a Ping-Pong/Cramer’s Rule.