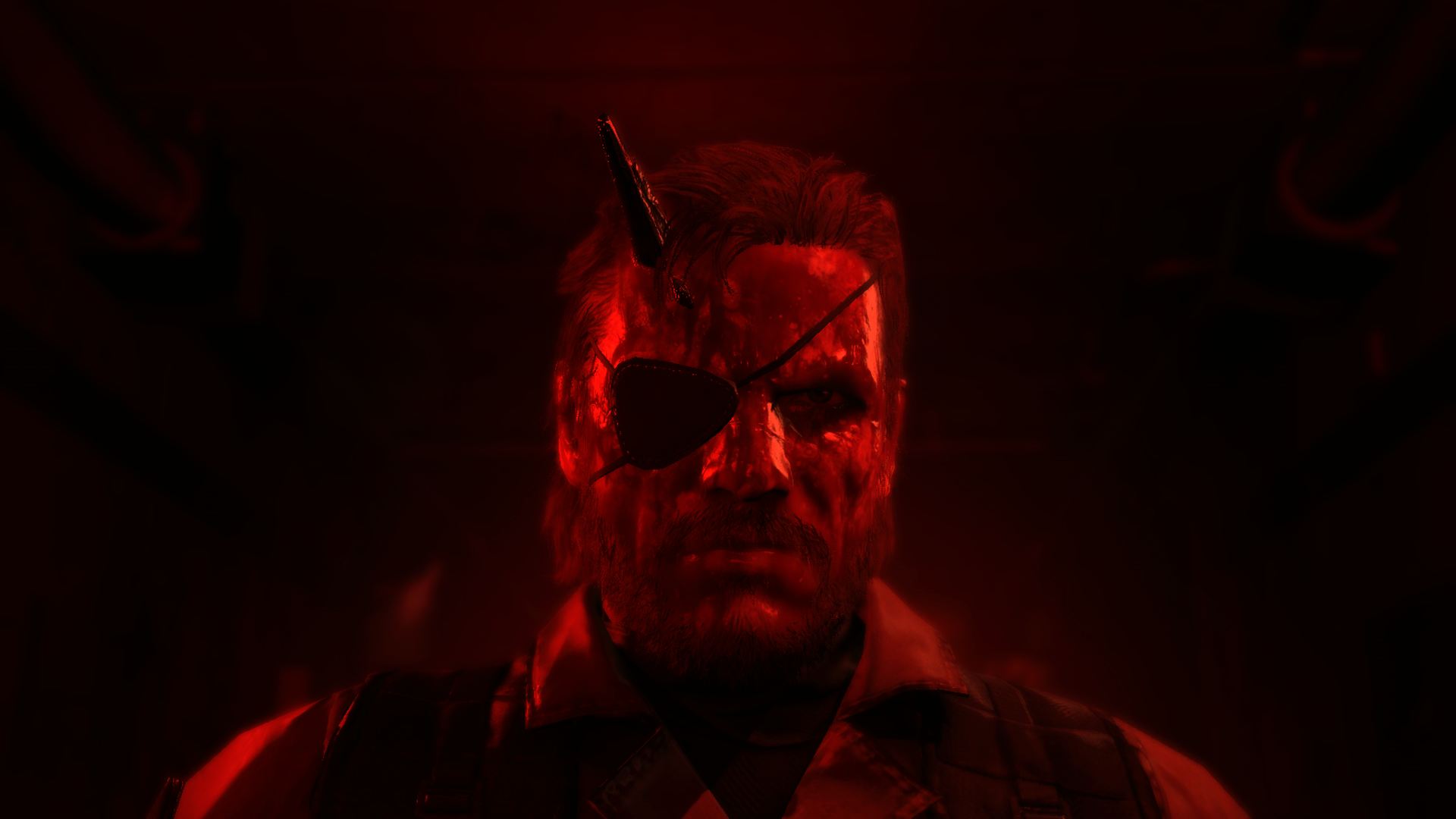 Released in 2015, Metal Gear Solid V: The Phantom Pain is one of the most controversial games of this generation; not for its content, but rather lack-thereof. Its development history will always be mentioned whenever this game is brought up, as it’s almost impossible to talk about The Phatom Pain without first addressing the drama surrounding its release.

For those unaware, longtime director of the Metal Gear series and video game icon Hideo Kojima went through a messy breakup with publisher Konami for most of 2015. This article from Polygon lays out the ordeal in great detail, but to summarize, Konami has been restructuring its business model in recent years, shifting away from expensive, blockbuster games like the Metal Gear series and turning to the more profitable mobile market. For reasons unknown, Konami began slighting Kojima during Metal Gear Solid V‘s promotion by doing things like removing his name from the front of the Phantom Pain, Ground Zeroes, and MGS: Legacy Collection box art.

This already made Konami look pretty bad, but soon after, anonymous tips came from Konami employees stating that working at certain divisions of the company such as Kojima Productions was like a dystopian nightmare. Internet access was restricted and monitored, people who took too long of lunch breaks were publicly shamed, and cameras were installed to observe workers. Reports say that Kojima left the Konami offices for good in October, but even still, Konami maintained that he was working for the company, and simply on vacation. Well, Kojima never returned from that vacation. He has since established an independent Kojima Productions, and is working on projects such as Death Stranding, which was just announced at E3.

It’s important to keep that story in mind when looking at what Metal Gears Solid V became. It’s the most grim game of the Metal Gear series, and notoriously, the least complete. 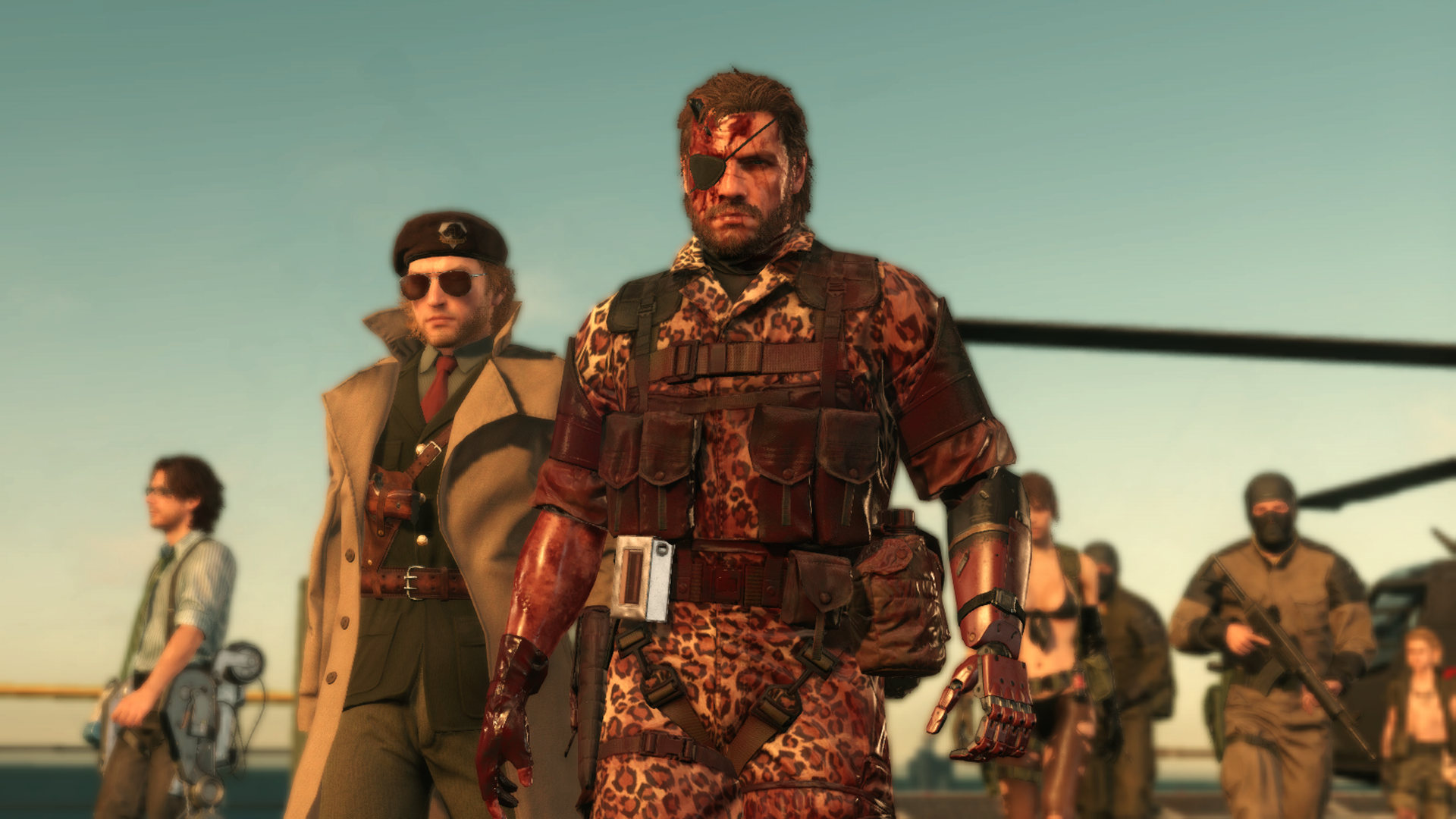 Where this incompleteness is felt the most is in MGS: V‘s story. The game is divided into two chapters, although calling Chapter 2 an entire second act is a bit misleading.

The Phantom Pain starts out promising enough, as Big Boss has just been taken into intensive care after a surprise attack on the original Mother Base. Big Boss loses the majority of his MSF soldiers, his entire base of operations, and his left arm. With the help of Kaz Miller and Revolver Ocelot, Big Boss forms Diamond Dogs, a new organization dedicated to continuing the goals of MSF, and avenging its destruction.

MSG: V is a story of revenge, not just for Big Boss but for the other major characters. While you can still find the telltalte Kojima humor throughout, it’s easily the darkest of the Metal Gear series. It opens with a brutal and gory massacre of the hospital staff treating Big Boss by the enemy OpFor, XOF. Later in Chapter 1, you encounter a parasite which covers its hosts in grotesque sores, and walk through a facility full of wheezing, nearly-dead victims in a scene that looks ripped out of the unfinished Silent Hills. There are some sections that are uncharacteristically brutal and mean-spirited, which makes you wonder if what was happening during the production of MGS: V affected the game’s direction. 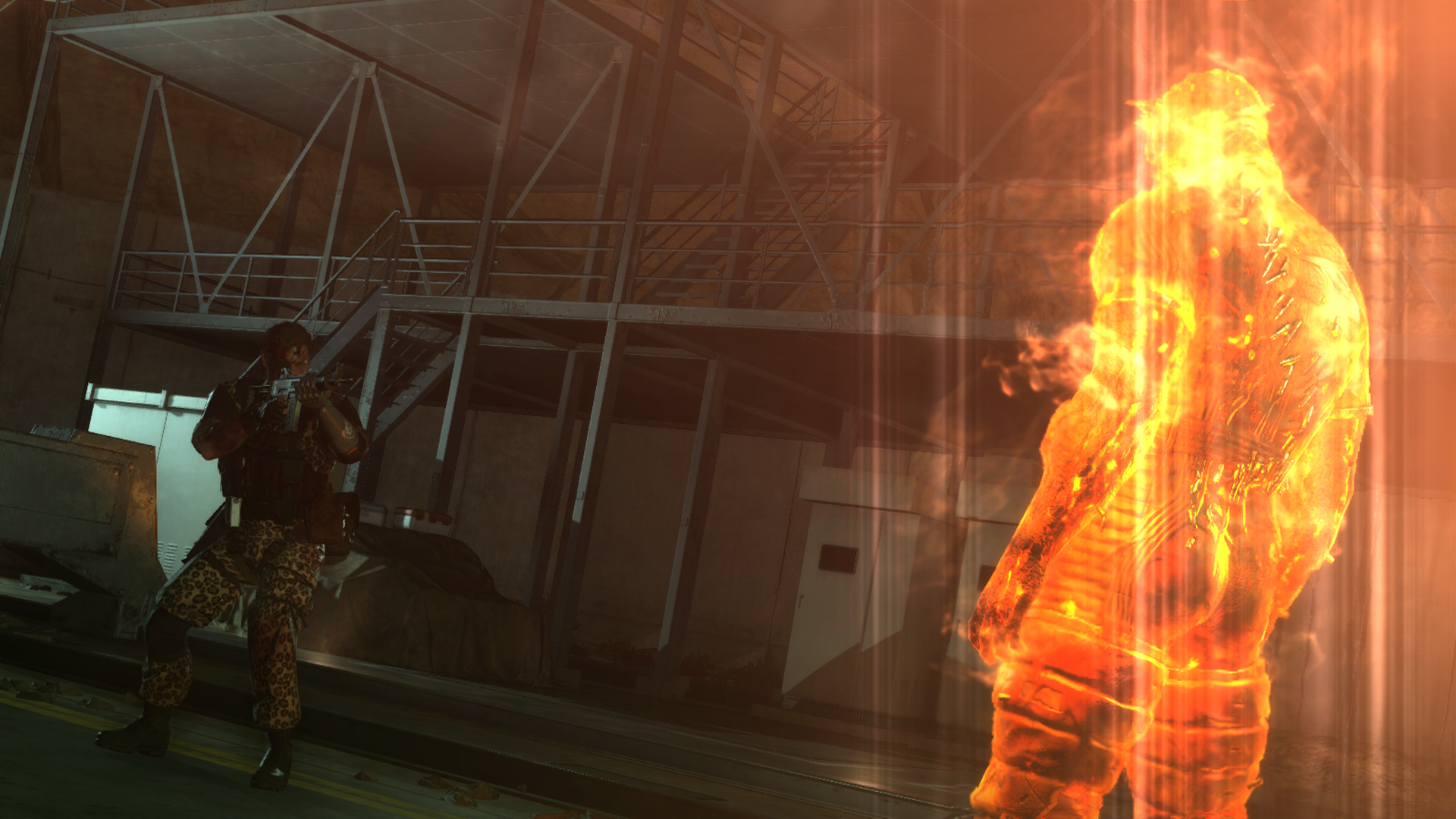 Chapter 1 of The Phantom Pain is a disorienting experience. The player is never really given a chance to gain a solid footing and invest themselves in what’s happening. You never get to know the main villain Skull Face as well as you do Volgin in MGS: 3 or even Hot Coldman in Peacewalker. It felt like the entire time I was playing I was waiting for the plot to get going, and when it did finally end, it felt abrupt and unsatisfying.

What the story in Chapter 1 is really missing is context. In most missions you’re doing random mercenary work, rather than advancing the plot in a meaningful way. There are exciting story-driven set pieces such as sneaking into one of XOF’s strongholds, and those moments where you feel like you’re on a significant mission doing something that matters are genuinely badass. But it feels like there’s so much filler in-between that the pace drags to a series low.

After a climactic boss battle that seemingly concludes the main story, Chapter 2 begins, which is where you can really start to see where Kojima Productions was forced to cut corners in production. Plot-wise, this second part of the story is more engaging, as conflict emerges on Mother Base and the characters you care about start becoming more involved. But there are only a handful of actually new missions. Instead, players can either re-do missions from Chapter 1 with more difficult parameters, or complete Side-Ops in order to advance the story. What’s happening during the original missions is interesting, as it transforms Big Boss’s character and the future of Diamond Dogs, but it feels totally disjointed when all you’re actually doing in-between is wasting time with filler.

Also, the controversial ending is something that needs to be addressed. It’s difficult to critique without outright spoiling what happens, but to put it vaguely, it’s a big reveal that completely changes how you perceive the events in The Phantom Pain. It’s a fantastic twist that I’m sure polarized some, but a great reveal like that can’t redeem a video game story which was so absent from what the player actually does in-game. 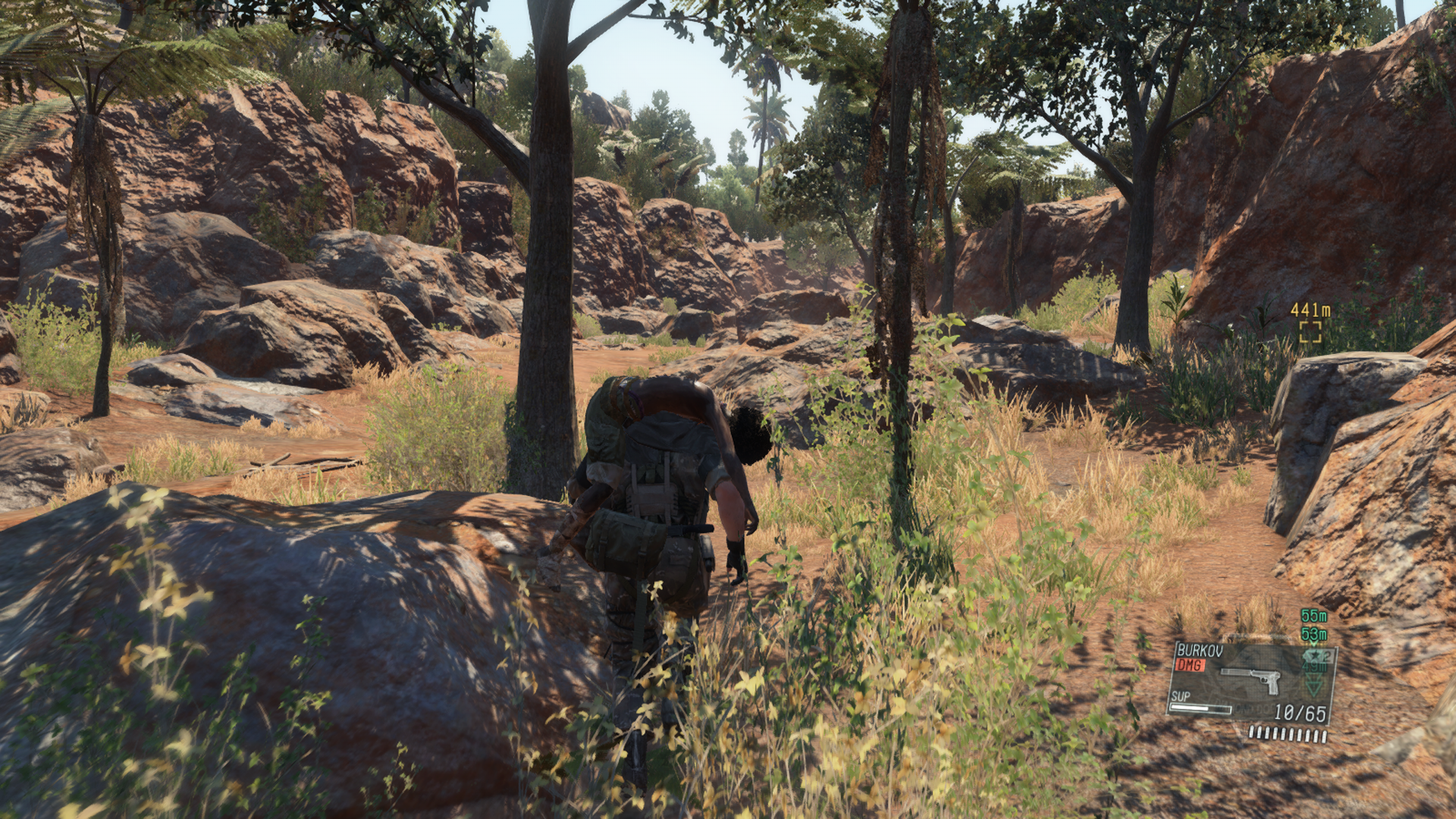 If the story always complemented the gameplay as well as it does in MSG: V‘s best moments, this would easily be the greatest Metal Gear game of all time. And even though The Phantom Pain does not achieve this feat due to its unfocused narrative, the refined stealth mechanics that compromise the bulk of MGS: V pick up the slack when the plot has a hard time maintaining interest.

“The Phantom Pain” is a textbook showcase of emergent gameplay. There are an infinite number of ways to complete missions, and players are given a ton of upgradable tools to sneak on their terms. Its open-world design favors experimentation, and creative players are sure to find hilarious ways to sneak through the game’s vast play-spaces.

MGS: V is insanely ambitious for a series which has always relied on linear, controllable levels to tell its measured story. In a way, it makes your sneaking feel more authentic, knowing that how you infiltrated an enemy outpost was entirely a plan of your own design. While there are only two areas to explore, both are sizable and heavily detailed. After free-roaming and repeating missions in Chapter 2, you will start to become familiar with these initially boundless maps, but the environments never feel small.

Part of the reason the open-world works is the new Reflex mechanic, which slows time if you’re spotted and allows Big Boss to line up an easy kill shot on whoever is about to blow his cover. It helps prevent frustrating moments where an enemy you never saw spots you from across the huge environment, but it can sometimes feel like cheating when you’re sloppily running through a base headshotting enemy after enemy in slow motion. Thankfully for MGS purists, this feature can be turned off.

Another new mechanic in MGS: V is the buddy system, which blends seamlessly into a series which has traditionally had players operate solo. There are only a handful to choose from, but almost all of them feel necessary and add an extra layer to sneaking. They’re each good at different things, and can be heavily upgraded and customized as your bond grows with them. While your buddies can technically be spotted by enemies and killed, they never cross that line into becoming a nuisance. Usually if the enemy sees them it’s your own fault, and even then you aren’t actually spotted yourself. They’re a fun, useful addition to MGS: V‘s sneaking sandbox. 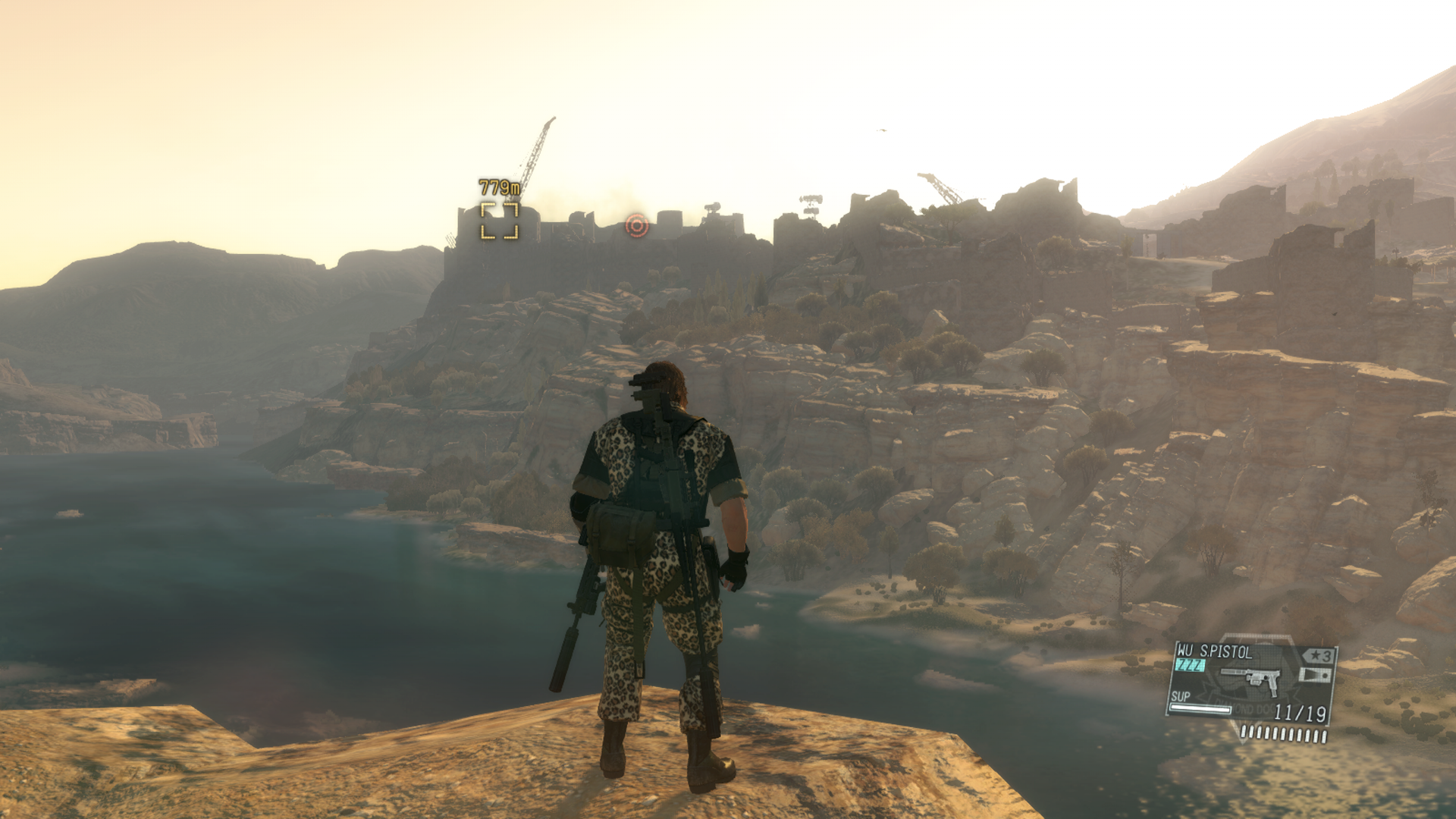 The precursor to The Phantom Pain, Metal Gear Solid: Peacewalker, featured a base-building mechanic which had players developing technologies, performing foreign combat operations and managing the staff of MSF’s Mother Base. With the original Mother Base destroyed, MGS: V brings back base-building in an insanely robust way. Now, players can customize everything from the logo of Mother Base to the color of its paint. You can actually walk around your base now, and watch it grow from nothing.

Most of the same departments return from Peacewalker with similar functions, like R&D, Intelligence and Combat teams. As Big Boss, players have to carefully manage the individual teams in order to assure that Diamond Dogs runs as effectively as it can. The soldiers under your command now have more personality than ever, with each member of Diamond Dogs having different skills and speaking different languages. Troublemakers will also start to cause grief within the unit, and it’s up to you to make sure they’re dismissed from your ranks before they send their fellow soldiers to medical.

While every unit has an important function, R&D is arguably the most significant as it dictates how advanced your gear becomes. There’s a sizable number of weapons of every type, with the higher-end models being real game-changers. You can also upgrade gadgets like your night-vision goggles, develop new armor for yourself and your buddies, or spend the money outfitting your support chopper. There’s a lot to purchase, and it all pays off with giving you even more options on your infiltration missions.

It should also be noted how incredible and clean The Phantom Pain looks. The Fox Engine has a unique polish the lends itself well to the cinematic nature of the Metal Gear series. Although it’s not immune to the occasional texture popping, the vast majority of the game looks brilliant. The dynamic lighting that strikes Big Boss as he rides across the Afghan desert is breathtaking, and the dust that bellows up during a windstorm demonstrates the power of the effectively defunct Fox engine. 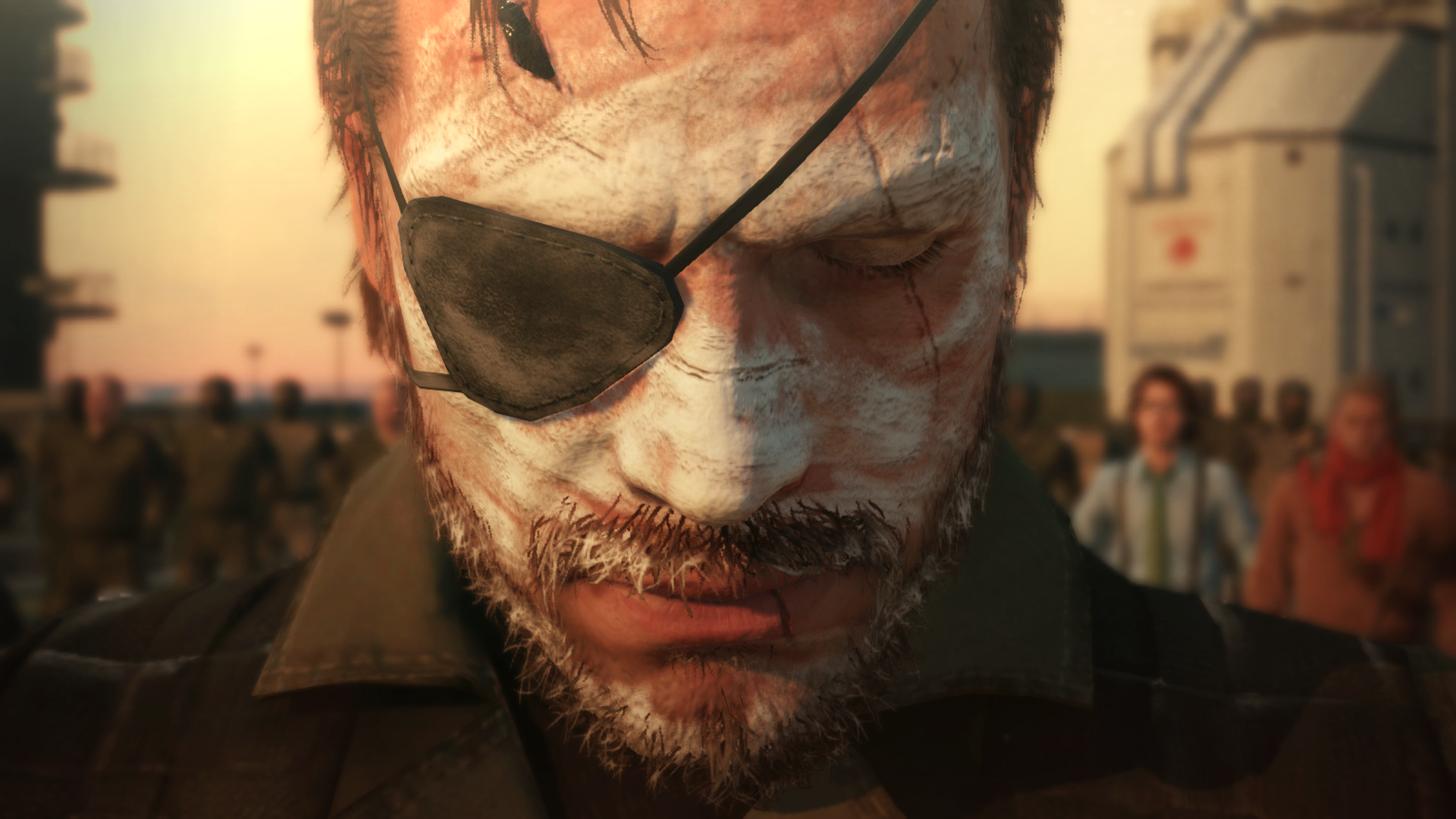 As remarkable of a game as The Phantom Pain is, it’ll always feel unconsummated because of what could have been. There’s a third chapter of this game buried somewhere in Hideo Kojima’s brain that will never see the light of day because of real-world circumstances, and that’s incredibly frustrating.

There’s a dim light of hope, as something called “Metal Gear Solid V Definite Ex” was recently listed on Amazon. Many are praying that somehow this release will contain the hypothetical third act of MGS: V, or at the very least that it’ll provide some feeling of satisfaction. But even if this does gives us a final chapter, without Kojima on-board, would it really even matter?

Sadly, Metal Gear fans will just have to cling to the idea of a conclusive finale to the game that will never exist. The final Metal Gear Solid will always be associated with the pain of what might have once existed but can never be. A phantom pain.