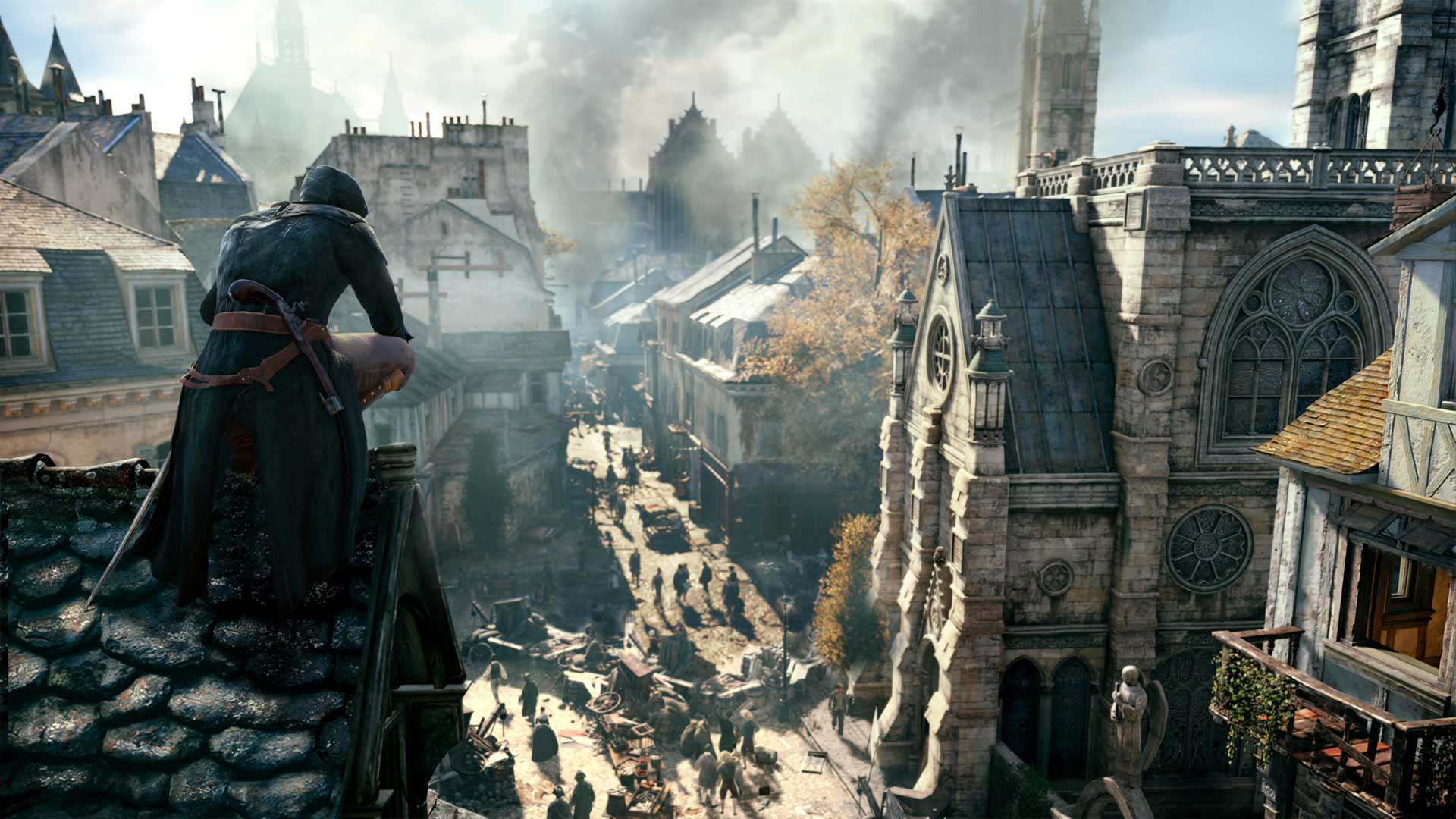 One of the Best Assassin’s Creed Games Yet!

When Assassin’s Creed: Unity was released last year it quickly fell down the order in my backlog, looking back maybe that was a blessing in disguise.

In the months following ACU’s release Ubi Soft issued several major patches, almost 7 gigs worth, to correct the numerous glitches found in the game. And while the game is by no means perfect, I did not find any of the remaining glitches to be that bothersome, occasionally an NPC in the street might walk up a street lamp, but that was about it. Many of the bugs that littered the game early on, such as characters missing facial features, have since been taken care of, and the result is a beautifully crafted tale of revenge, redemption, and love.

I expected to run into all sorts of trouble with the controls. Assassin’s Creed games are notorious for being somewhat hard to handle because it has an incredibly complex parkour system that would occasionally react in a manner that was the opposite of your intended action. This parkour system, or free running, has been vastly improved over previous Assassin’s Creed games. Rarely did I find myself running the wrong direction, climbing the wrong wall, or getting stuck while trying to climb on any object or building. Though it did take a few hours to get used to one of the new changes to the system.

In previous Assassin’s Creed games, most of the actions relied on a single button to execute a jump, or climb a wall. For Assassin’s Creed: Unity, the developers added a second ‘action’ button you can use specifically for the purpose of safely traveling down a building or hurdling an object, allowing for a more fluid movement while trying to escape from an enemy, or while descending from the top of a building. This new control scheme prevented a lot of wall climbing when my intent was to hurdle through an open window or door, and reduced the amount of times I jumped off a building into the street instead of diving into a stack of hay or leaves. In my opinion this is a very welcome change, it reduced the amount of frustration I had experienced in previous versions of the game and streamlined the game play allowing the focus to stay on the characters and the story woven around them.

I have always enjoyed the entries in the Assassin’s Creed franchise, but often found the game to be very frustrating to play, so it was refreshing to see a few of these changes implemented to reduce that frustration. For the first time since the original Assassin’s Creed navigating the rooftops, though not perfect, was relatively easy. Moving around on the street level and through crowds was also a relatively simple task. Many buildings had interiors accessible as well, with the only flaw being that occasionally it could be difficult to climb into a window above the ground floor.

Where Assassin’s Creed: Unity really shined is how it tells the tale of a young boy named Arno, his childhood friend Elize, and the tragedy bestowed on them both. Arno was the son of an assassin who was orphaned and taken in by Elize’s father, a high ranking Templar. Years later, Arno witnesses his adopted fathers murder, and is immediately accused and thrown in jail where he meets one of the current members of the Assassin’s guild. One of the biggest problems with Assassin’s Creed games of the past was the very confusing story, and while I absolutely loved the crazy sci-fi twist at the end of each of the previous Assassin’s Creed games, I have to admit they are quite a bit hard to understand.

Aside from the obvious ‘revenge story’ that comes with every Assassin’s Creed game, Assassin’s Creed: Unity had much more emotion to it. Add a touch of romance here, a dash of deceit there, and wrap it up with some betrayal, failure, despair, and retribution and you have one hell of a roller-coaster ride to experience from beginning to end. The emotional layers are so thick that you cannot help but become wrapped up in Arno’s tale, fall in love with Elize, and become torn as the two of them get pulled in opposite directions at every turn.

Final Word: Assassin’s Creed: Unity had a rough start, but in the end turned out one of the best entries into the series. I would recommend any fan of the series give this game another try, and fall in love with the series all over again.