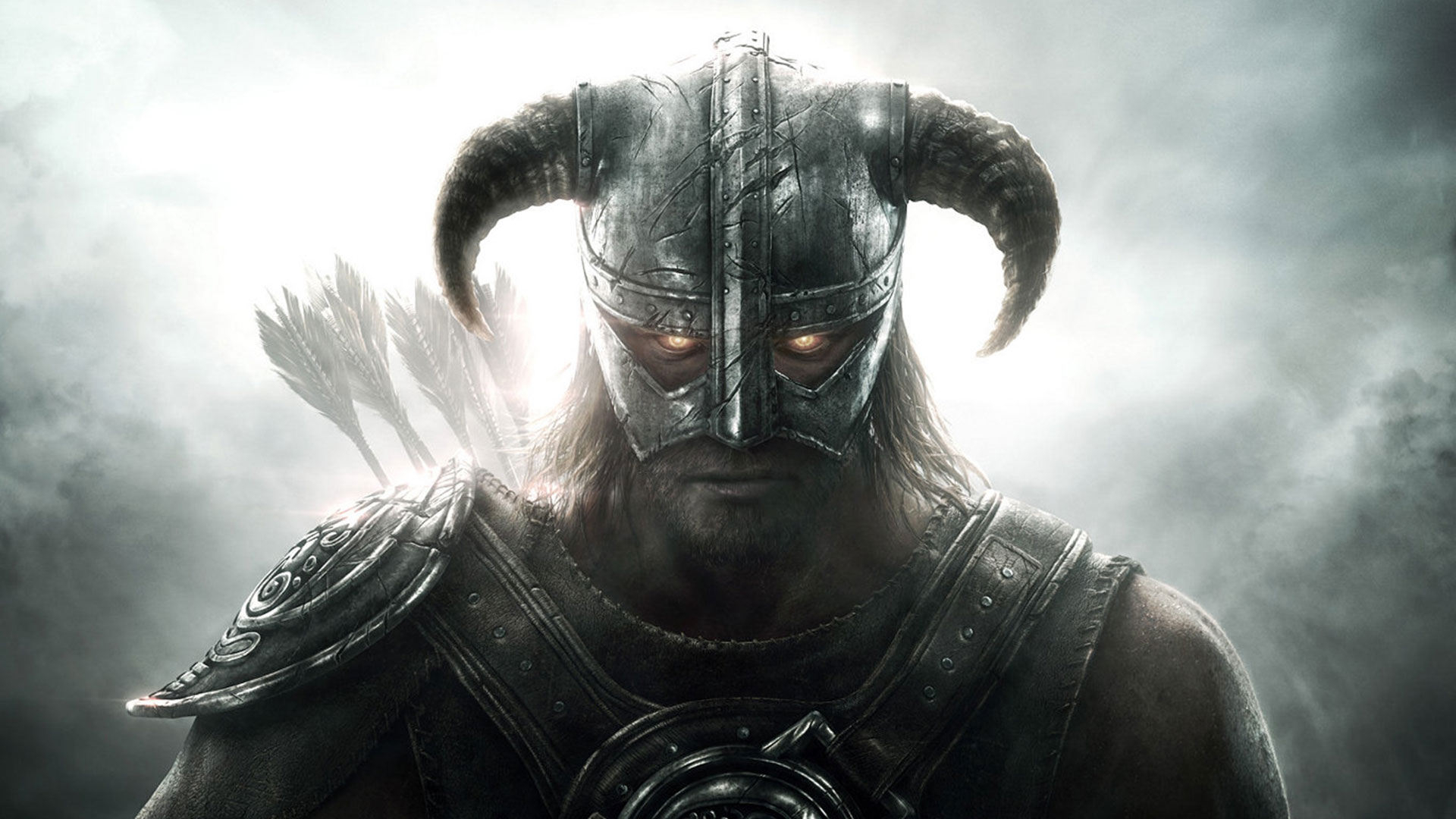 Skyrim – One Hell of an Epic Fantasy

An updated review of Skyrim I made back when it was first released.

The Elder Scrolls has become something of a legend in the fantasy RPG world. From Daggerfall to Oblivion, every title in the series has been met with universal praise for their unique presentation, gameplay mechanics, and all-around terrific storylines, with only certain gameplay features being lamented as not being as good as other RPGs. Now, Bethesda Studios looks to create another epic with Skyrim, the fifth main title entry in the series. And what an epic it is. From the fantastic questlines, the incredible scenery, and the well done – though clunky – combat, this is one adventure you won’t want to miss.

The game begins with the player being delivered to the chopping block along with a few other prisoners, one of whom is a Jarl (the mayors of this world) and rebel leader who murdered the High-King of Skyrim. This is the one part that feels a little forced. It’s hard to tell who’s really talking at times when you’re always able to control the camera, as well as the fact that you get bombarded with information that, for new players, will seem confusing and overdone. However, right before the player is about to be six pounds lighter, a mysterious roar unsettles even the toughest soldier on duty. As they call off the names, the roaring only gets louder and louder. Once the player’s head is ready to be axed, a terrifying creature perches atop a guard tower. The yelling of “dragon!” seals the deal as the wicked beasts shouts at the soldiers and helps the player escape from the clutches of the executioner. 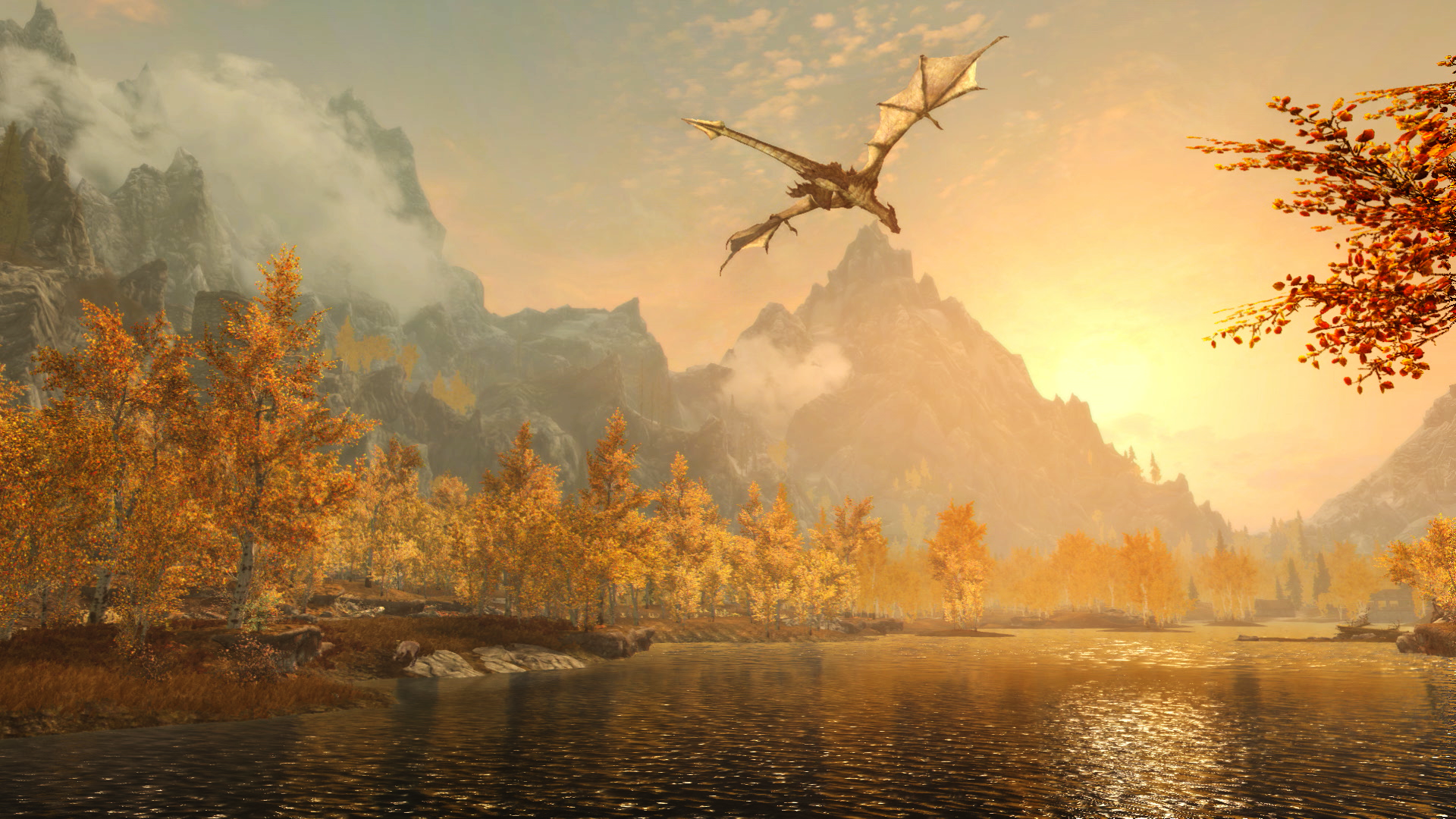 This is where the game gets exciting, gripping the player with an intense escape sequence right before they’re let loose into the vast eponymous world of Skyrim: a Northern country in the fictional land of Tamriel home to the Nords, which are a proud warrior race whose beliefs and traditions are akin to the Norse Vikings. As soon as the player sets foot into this open landscape, the game is theirs for the taking. No guidance, no rules, no pointless navigators required, though they still exist for those who get easily lost. And who wouldn’t get lost traveling through frozen tundras, vast evergreen forests, daunting snowy mountains, and even a few hot marshlands. It’s no wonder many players decide to just stop and take in the scenery. It’s all so gorgeous, with some texture pop-in that ruins things on a technical level, yet fixes itself quick enough that you can still look at it while hunting through the forests in search of artifacts that interrupted your deer hunting.

This is what Skyrim offers that few RPGs do: organic storytelling. The player themself find villages, meets up with tons of people, reads books and journals explaining the lore behind Skyrim’s legends and myths, and starts questing all on their own. I was overwhelmed with the amount of stuff I could do just within the first few hours. The stories the player creates are their own, though the main quest follows a somewhat specific story. The main storyline has the player learning about their ancestry and figuring out they’re a warrior of legend called the Dragonborn: one who can absorb the soul of a defeated dragon and use it for their own mighty shouting abilities. This adds a new dimension to a combat system that already surpasses Oblivion in all areas. Swinging a weapon is fluid, magic looks and feels powerful, and the armor feels like it’s truly protecting the player. This even happens in third-person view, which is now fully playable after its disastrous debut in Oblivion. Though some players will scoff at the lack of weapon degradation, the more streamlined process towards using…well, anything you want, and even the simplified alchemy and enchantment systems, allows the game to make up for it by preventing you from leveling up needlessly through running or jumping, as well as reducing the insane level scaling that both occurred in Oblivion. Nothing fixes the sometimes wonky animations, but it feels weighty and powerful compared to the hyper quick swings of the past. 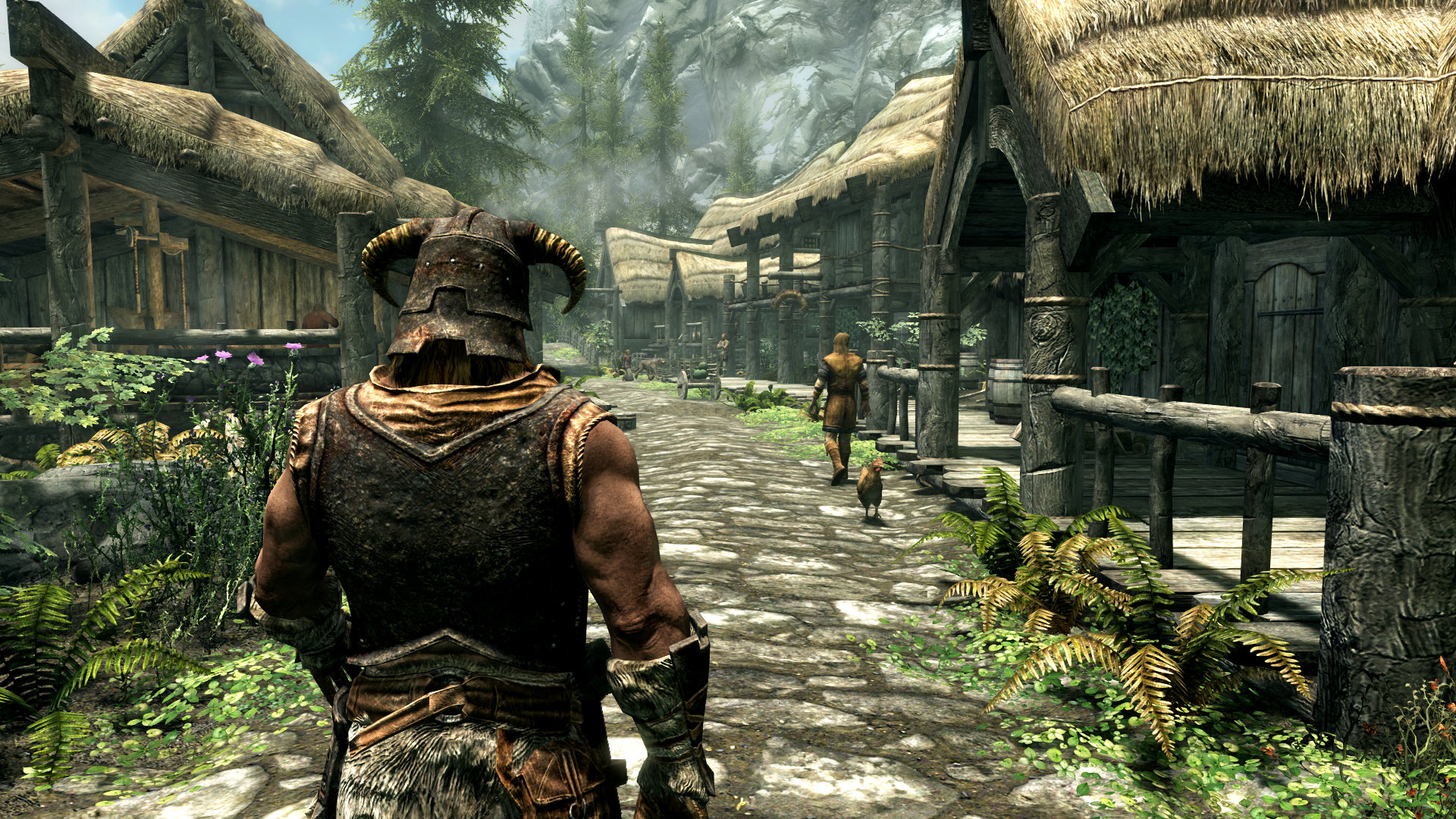 Other stories, as mentioned before, are also included alongside the main story. One involves a civil war between the Empire and the “Stormcloaks,” a group of rebels fighting for Skyrim’s independence from the Empire’s oppression of their traditions and beliefs—a wonderful allegory to the American Revolution. There are missions involving the mages guild looking to unlock an ancient magical power, a warrior guild that has a “beastly” reputation, and a secretive assassin’s guild. The great thing is that none of those missions are boring or repetitive (apart from some dungeons). Each story is unique in setting, presentation, and overall background. Same goes for all the other side missions, with special mention going towards missions involving the Daedra: the dark lords of this world. Everything adds to the world of the Elder Scrolls, and nothing feels like it’s misrepresented.

The leveling system is an incredible piece of work. Going with the organic nature of the game itself, the leveling system has the player gaining perk points for performing specific actions or applying their armor to good use. Swinging your weapons, picking locks, and even smithing all contribute to their respective skill. You use the points you earn on a skill set, such as enchanting, one- or two-handed weaponry, destructive or restorative magic, and all sorts of other goodies, as long as you were able to get said skills to their appropriate level.. However, unlike the overly precise system in Oblivion—which punishes non-skilled gamers for not leveling up their abilities correctly—the system in Skyrim allows the player to do whatever they want with their abilities. A mage can wear heavy armor, a warrior can sneak around with the greatest of ease, and a healer can lift a battleaxe and crush their enemies without losing too much stamina or diminish their mighty restorative power. 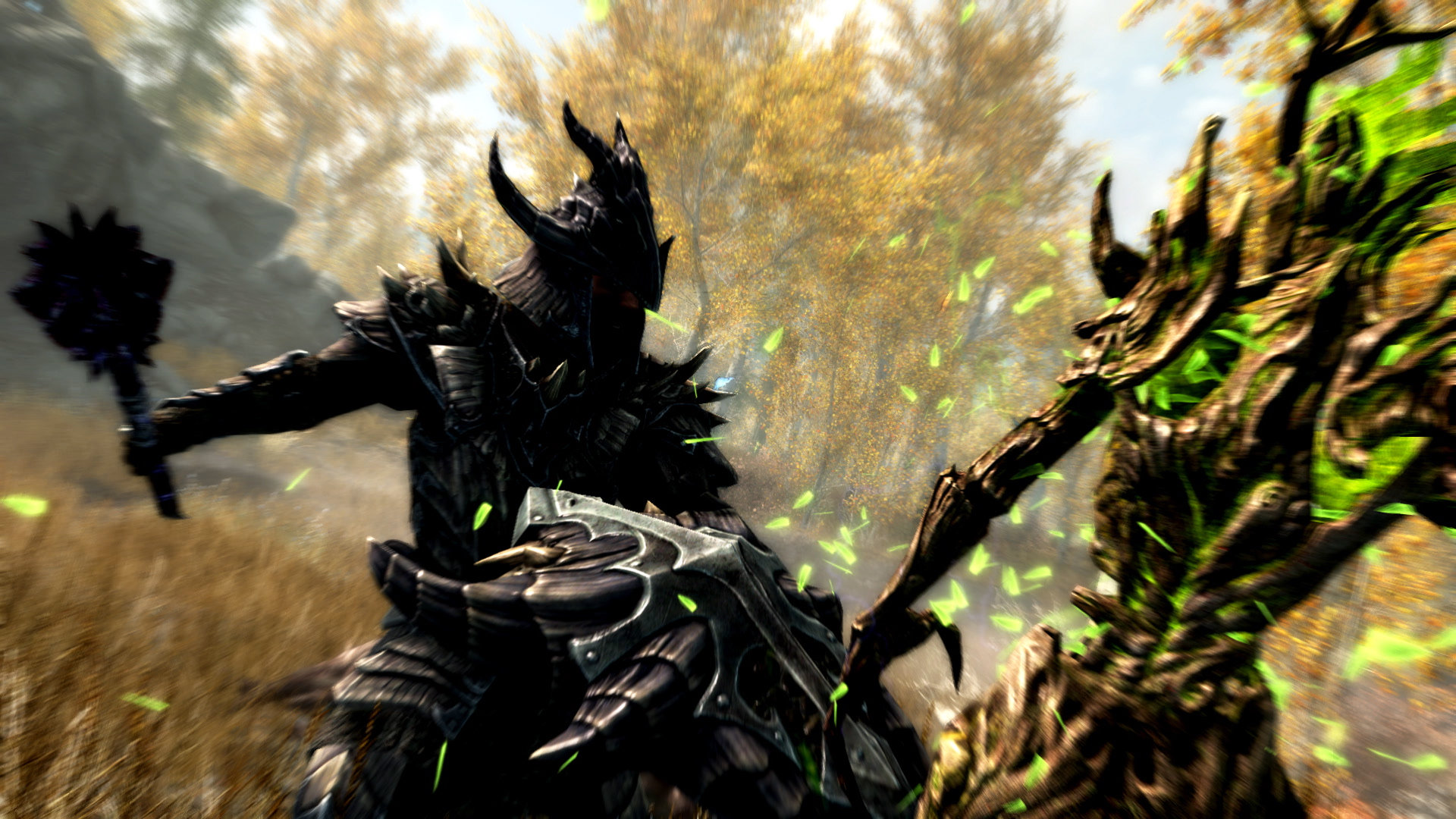 Enemies don’t level up with the player either…well, not as closely, anyways. Instead, enemies have a pre-set level, varying from place to place depending on how the player has progressed throughout the numerous missions they embark on, with only minor scaling occurring when you first enter the area at the level you currently are at, after which they will remain at said level for the remainder of the game in spite of how often you go back and forth between dungeons. New enemies make it to the game as well. Dragons, once thought to be extinct, have come back with a vengeance. Though they seem easy enough to beat within the first hours of the main campaign story, they soon become as fearsome as their legend entails.

The inventory system is also upgraded. Each item in the game has a specific weight, and the player has a set limit, much like in previous games. Wear too much, and running away from that troll will soon be a non-option. Perks and items can be gained that will lighten the load, along with building up the stamina meter, which increases the capacity by five with each upgrade, and thus allows you to carry all the sweet rolls and cheese wheels your heart has always wanted but never dared to attempt.

The sound is incredible, from rivers to dragon roars, with only the occasional glitch here and there. The music makes excellent use of Scandinavian chords and tones, complete with Nordic chants on some of the more intense tracks. The voice acting continues to be the same grade AAA quality voice acting of previous titles, with the voice talents of Joan Allen, Christopher Plummer, and Max von Sydow each giving movie-quality work (with a special mention towards the voice actor of one famous Italian plumber. See who it might be, I bet you won’t guess it at first). I often heard different NPCs having the same exact voice, which is an annoyance, yes, but an easily overlooked one at that. 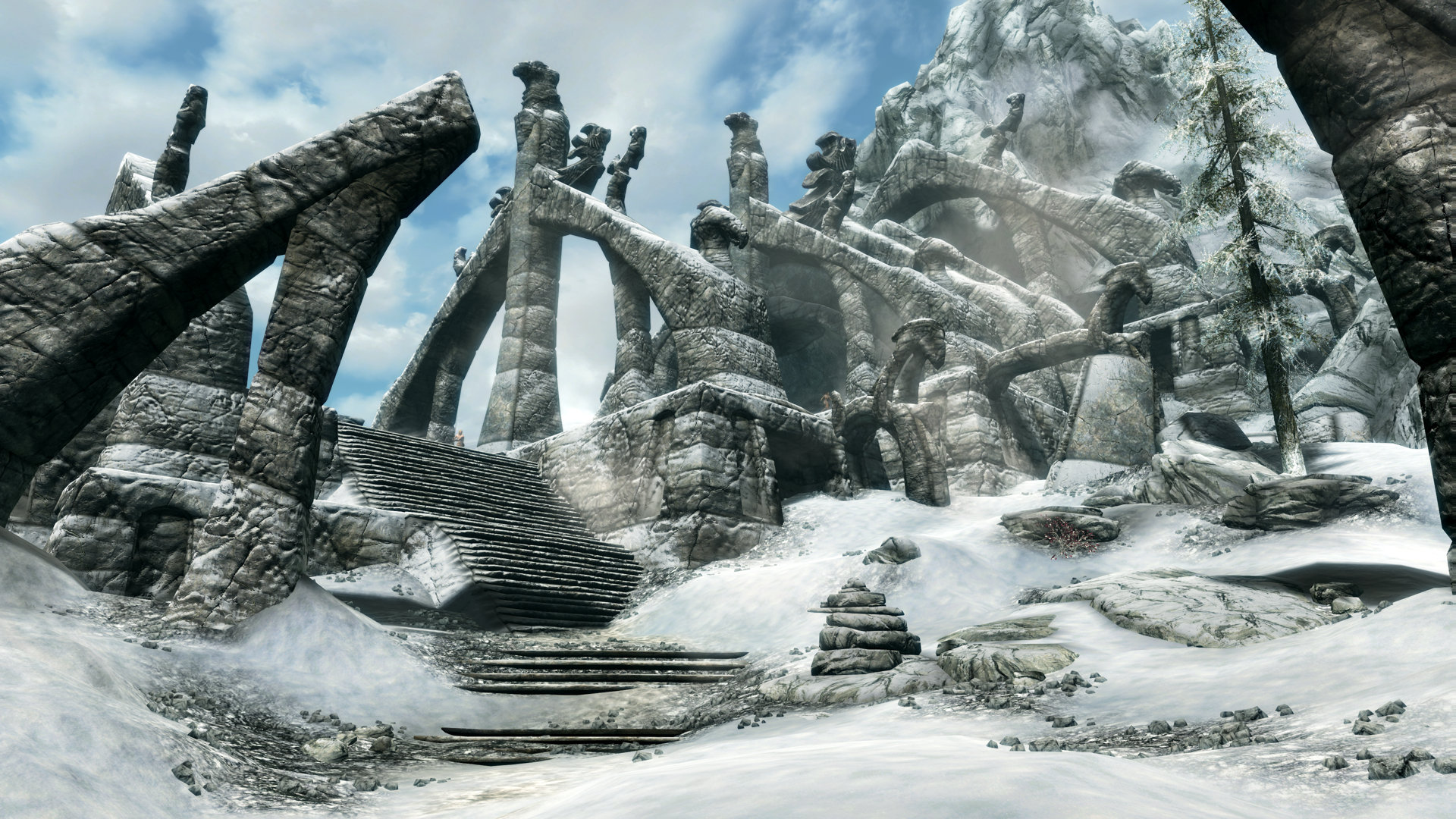 With all these great new features and improved gameplay mechanics on what was already a fantastic series, it’s disappointing to see some features getting the short end of the stick. Character customization, though extensive—especially with how the Kajiht and the Argonians look—is lacking in many areas. The NPCs, though they have intelligence enough to do their own tasks, become dumber than mops when they join the player’s party. They set traps already dodged, betray the player at even the slightest friendly fire, and are surprisingly always stronger than the player no matter what level they’re at. Also, the game has the unfortunate “Bethesda Curse” as I like to call it, where bugs and glitches run rampant throughout the game, aside from the occasional game crashing. Some are annoying, like shouts not being released as soon as the button is pressed, and others are great for giggles, like deer teleporting from one side of a river to the other. All versions have an issue with game freezes, though the Xbox 360 version seems to see less of this as opposed to the PC and PlayStation 3 versions. Patches have since come and fixed these issues, but they still exist in smaller doses.

Even with the expected bugs and the NPC nonsense, Skyrim still manages to be the definitive RPG of the current console generation. Though it might not be as colorful as other RPGs, it’s grittier, down-to-earth, and completely immerses the player into its world. From the organic stories the player creates themselves, to the amazing combat system, Skyrim is definitely a must-buy for all RPG fans, even those who aren’t even familiar with the Elder Scrolls universe.