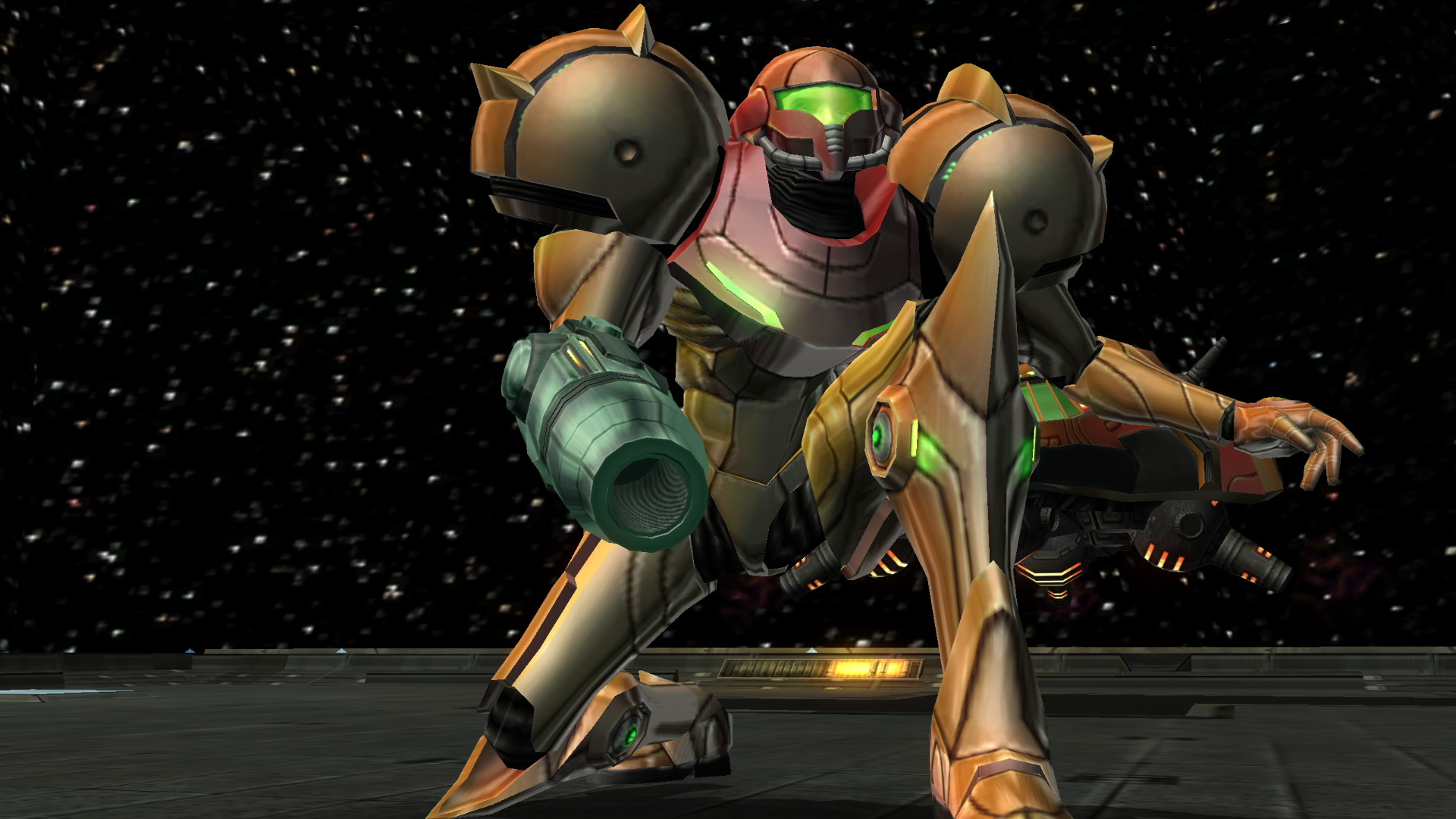 The Metroid We All Deserved…And Still Do

It had been eight years since the last Metroid game, Super Metroid, had been released. Even with the release of the Nintendo 64, fans of the Metroid series wouldn’t see a new Metroid title, let alone the first 3D title release for the consoles. It wasn’t until the Nintendo Gamecube came out that fans would come to see a new Metroid release titled Metroid Prime. Many questions rose from this: how would the series translate to 3D? Would it have unique features, or would the gameplay remain similar, but only with 3D rendering, like with Super Mario 64? Fans got answers in the form of a First-Person Shooter action platform title. How does this combo work, exactly? Well, it works excellently, and here’s why.

Let’s go over the story first. Set between the first Metroid game and Metroid II: Return of Samus for the Gameboy, it begins with Samus intercepting a distress call from the space pirate ship Orpheon. As fans of the series would know, Samus is a female bounty hunter who has a long-standing feud with the Space Pirates: a race of aliens who seek to advance their technology to other worlds, regardless of whether or not they volunteer. Once she lands, she sees that the entire crew has been slaughtered by the creatures they were experimenting on. After finding out that the pirates were researching a meteor crash that holds a mysterious energy source called phazon and clashing with her arch-rival Ridley once again (now clad in robotic upgrades since their last encounter), she follows him to the nearby planet of Tallon IV, the site of the meteor crash, in order to investigate the connection between Ridley, the Space Pirates, and the mysterious phazon.

The main thing to know about the story is that it isn’t told through cutscenes or dialogue, since Samus has been a silent protagonist since her inception, like most other Nintendo protagonists. Instead, it’s told through the events that happen and through mechanics that I’ll explain when I talk about the gameplay. This is a pure example of using the game itself to tell the story. The only times the game breaks pace is when introducing a new area, going down an elevator, or when you encounter another boss. This isn’t unnecessary or out of place, however. If anything, it’s almost inconsequential to the overall flow of the game in general. Plus, it allows the player to see how great the game looks.

The graphical prowess of Metroid Prime has been touted as being fantastic, and I have to wholeheartedly agree. For how limited the Gamecube was, I found it astonishing to see so much detail put into Metroid Prime, all without any graphical hiccups like texture pop-in or loading screens. Everything in this game, graphics wise, flows smoothly. The environments are some of the richest ever seen on any gaming console. The unique sci-fi atmosphere of the Metroid series is kept intact with the most sharp textures (for the time) and cleanest details you’ll ever find on any console, this generation or next. The ruined dusty temples of the indigenous Chozo of Tallon IV, the wild jungles varying in colorful fauna and flora, the blazing hot depths of the Magmoor Caverns, and the frigid and barren arctic wastelands of the Phendrana Drifts are all expertly crafted and wonderfully detailed, with level designs that allow for almost gratuitous amounts of backtracking through areas just to find upgrades. It just can’t be a Metroid game any other way.

It also can’t be a Metroid game without the inclusion of atmospheric music. The soundtrack to this game takes on an ambient electronica-type sound that varies depending on where you are in the game, even when going down an elevator. The music is moody, intense, and quite bold at parts. The Magmoor Caverns also hold special mention for remixing the Ridley’s Hideout music from Super Metroid, which was nice touch by the developers for fans of the old to feel like they’re back in the original side-scroller.

How can a Metroid game be a First-Person Shooter though? This question dogged fans for the longest time. How can a game that’s played from the First-Person perspective hope to possibly capture the platforming perils found in previous Metroid titles? Maybe they would change it when you’re not in combat or something. Well, sad to say they don’t change it. In fact, there’s honestly no need. The controls are something to get used to, but once you do, you stop questioning it. Every jump you make is almost by instinct at that point. Even grappling, which I thought impossible for an FPS game, is actually done rather well and doesn’t feel at all stiff or gimmicky. The aiming controls for combat are very easy to use, and the gun feels powerful too. You get the feeling that you’re hitting the enemies with everything you’ve got, and it feels oh so satisfying.

Just how much is “everything you’ve got”? Samus becomes a one-woman tank by the end of the game, basically. You find the standard missile upgrades, new beams, health tanks, better suits of armor, and new visors apart from the scan visor, which allows you to get detailed information about the environment, your enemies, and even unlocks more of the story through the scanning of ancient Chozo lore and Space Pirate logs. There’s tons of exploration to be done if you want to get everything, even if you get the sense that you’ve been through that one room over fifty times in order to find it. This is also helped further by the return of the morph ball, which shifts you to a third-person perspective as long as you’re in the form. Rolling around is not only fun, but feels realistic. Gravity affects your movements, especially on ramps, and the physics feel like the ball form has weight instead of being a fast and furious thing steamrolling through the ground.

You can also view your map if you ever get lost, with map stations dotting the areas you visit that allow you to unlock the basic layout of the next place you’re going to explore. There are also save stations scattered about, as you’ll often find yourself getting lost in the vastness of Tallon IV if you’re new to the game. They also recharge your health and sub tanks if you’ve taken too much damage from enemy encounters.

Every enemy encounter is varied. Some will have you steamroll a couple of bugs trying to get in your way, and others will have you taking on Space Pirates in closed spaces that force you to find a tactic that suits the environment you’re in, since the intelligent AI of the enemies can easily overwhelm you if you’re not careful (the fact that Samus doesn’t defend herself doesn’t help either). Even the boss battles prove to be some of the most challenging bosses in video gaming. There’s no obvious weak spot tricks, such as a pulsing red orb on their body, to exploit like in typical Nintendo games, but rather has you scanning the enemy to find a hole in their defenses and exploit those once you’ve figured it out. This isn’t always easy, as bosses hit hard and are often smart enough to cover their weak points almost instantly. Finding suitable methods of exploiting these bosses isn’t easy, but is almost instantly rewarding.

It was difficult to find faults with this game, as everything works so well and so fluidly that it’s incredibly easy to miss whatever’s wrong. But for fairness, here’s what I had issues with. The game almost makes you have to complete the game one-hundred percent in order to see Samus’s face at the end, though this is similar to the previous games, so this is actually nothing different. Also, there are moments where doors don’t open immediately like they should. It’s almost a form of a loading screen that makes you wait. The times they take to open are nothing aggravating, however, and are negligible at best.

Aside from those minor nitpicks, Metroid Prime stands as one of the single best video games ever created. An excellent atmosphere, stunning visuals for the time, great storytelling techniques, and great combat and gameplay all make this game a legendary one among the gaming community. You owe it to yourself to play this game and keep in your collection if you own a Gamecube still. It has replay value simply for the amount of collectibles and for the many speedrunning opportunities the game has. Do not ignore this game. Find it and add it now.