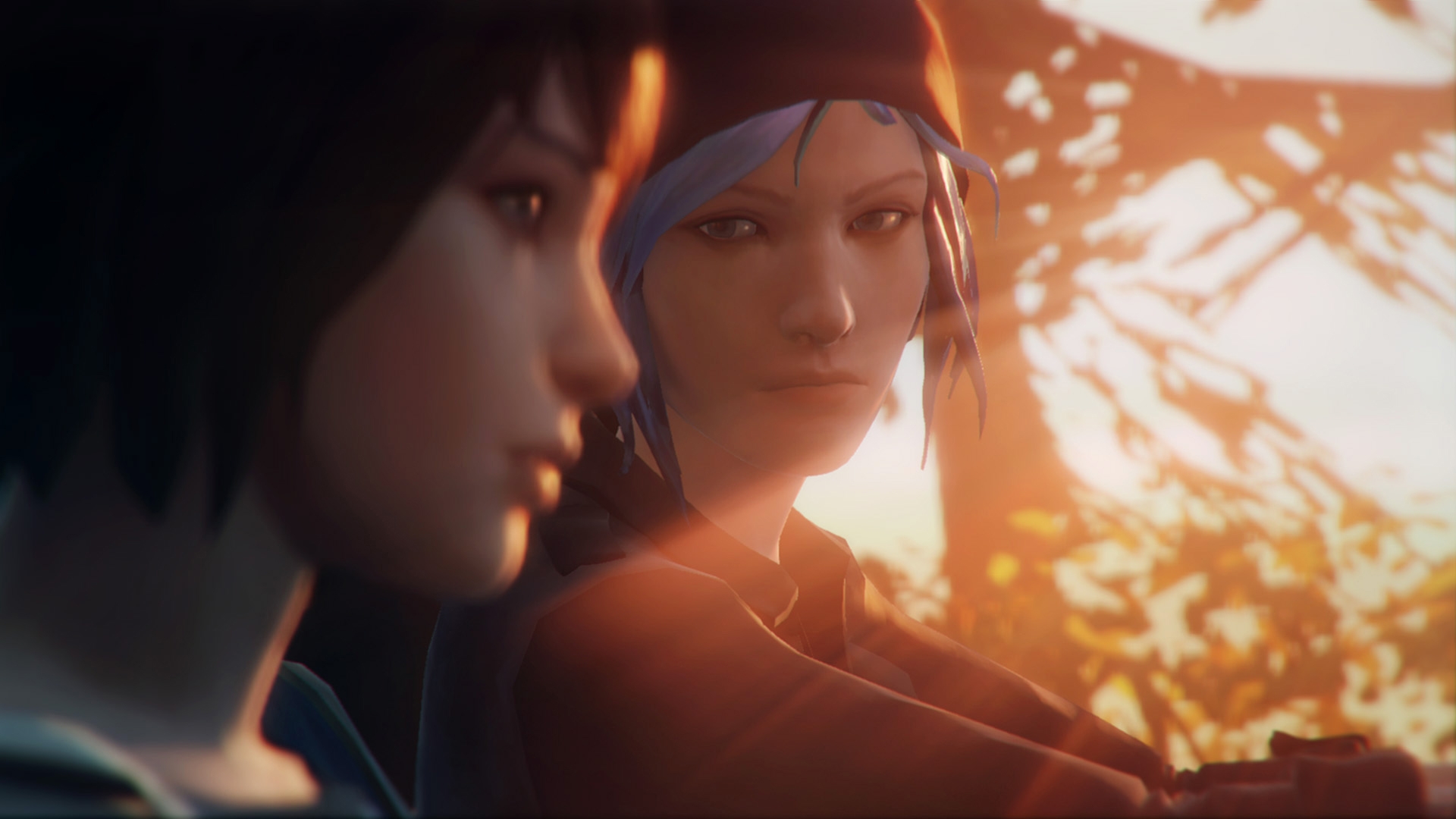 “Life is Strange” is Cringe Beyond Repair

If a Facebook mom wrote and directed a teen drama. This would be it.

In narrative choice-based games, the writing is everything. When there’s little to no actual gameplay, the only connection the player has with the world derives from the story; the participatory nature of a traditional video game is removed, and what’s left is basically an interactive movie. In order to work, these video game/film hybrids have to be well-written and well-paced, or the result can be a torturous grind that fails at both efforts. Enter: Life is Strange.

To be brief, Life is Strange is a story about Max Caulfield, a teenager at an art school in Oregon who has dreams of becoming a professional photographer. Her school, Blackwell Academy, is located in the fictional town of Arcadia Bay, which the player will become quite familiar with over the course of the five-episode series.

After witnessing her estranged best friend Chloe being shot in the school bathroom, the trauma triggers something in Max which gives her the ability to control time. Max’s time-travel power is the core mechanic in Life is Strange, as players will use it to solve puzzles, find out information and reverse critical decisions in the game.

As Max’s powers evolve, she becomes wrapped up in the drama of her high school classmates, while also trying to prevent her psychic premonition of the destruction of Arcadia Bay from coming true. Her only confidant is Chloe, who agrees to help Max get to the bottom of the strange occurrences around their town while they attempt to mend their broken relationship. 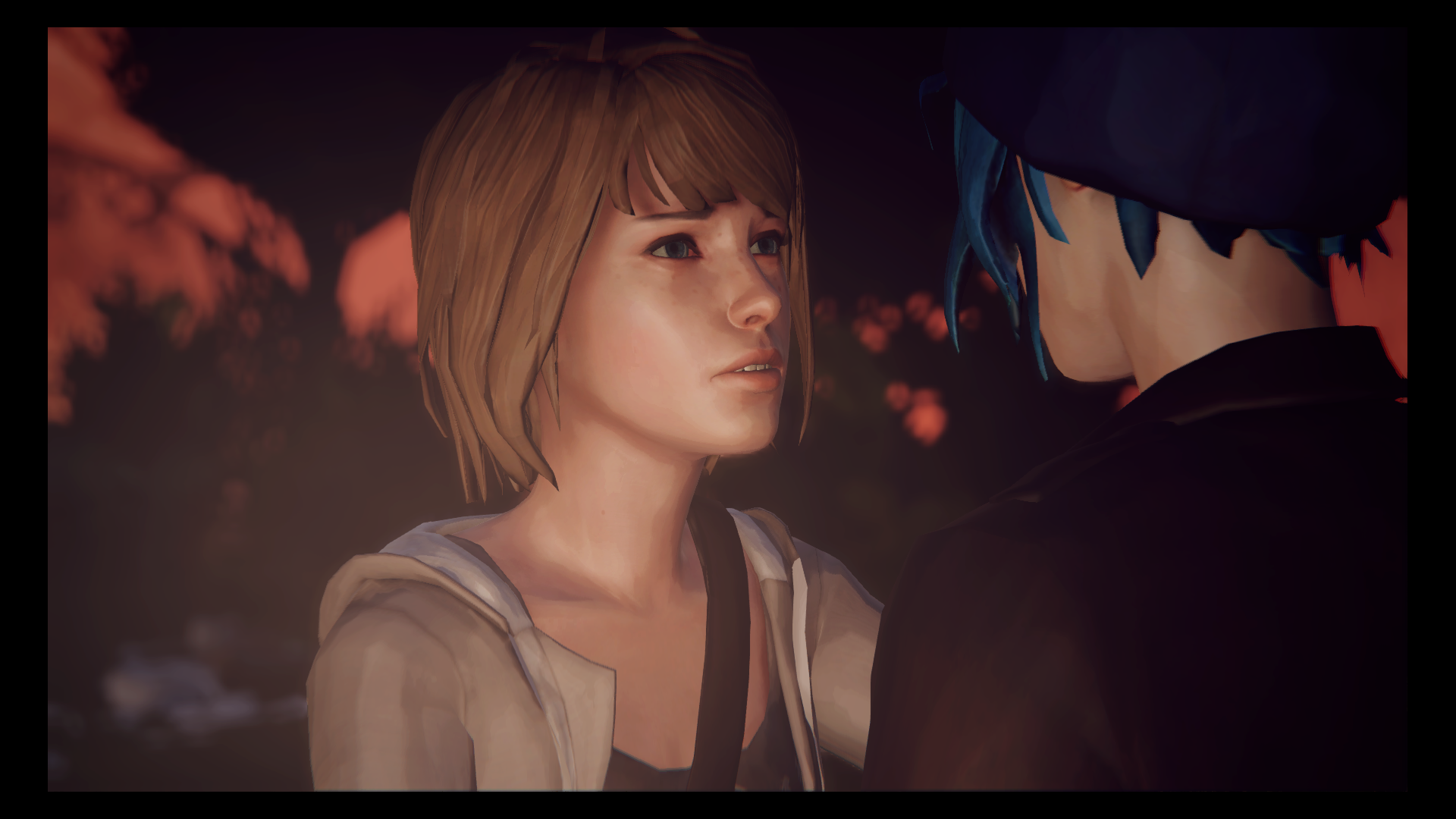 To be fair, the story has some stuff going for it. It’s thematically complicated, and includes touchy subject matter like domestic violence and drug abuse. But it’s hard to appreciate when the dialogue makes the characters who are put through these trials downright hateable.

How characters talk in Life is Strange cripples the story. Your eyes will roll into the back of your head as you hear the teenagers of Arcadia Bay casually use the following words:

This, on top of a countless number of unnecessary pop culture references makes verbal exchanges between key characters hard to sit through, let alone invest yourself in. The male love interest, Warren, is with no exaggeration the single most annoying character I have personally encountered in a video game. He’s that guy at a party who just spouts memes and tries way too hard to make jokes that aren’t funny. And as Max, you have to sit through his awkward attempts at flirting and asking for hugs.

David, Chloe’s stepdad, is another primary character whose dialogue is so derivative and blunt that it better belongs in a high school Creative Writing class than a professional video game. A soldier who recently returned from service, David is a security guard at Blackwell who takes his job too seriously. He’ll say things like, “Okay, I’m gonna retreat for now. I know when I’ve been outflanked.”  He always speaks in military metaphors, and is an insultingly simplistic caricature of a troubled veteran.

Although video games aren’t known for consistently stellar writing or voice acting, in narrative choice-based games, that’s pretty much all they have. And even though the characters are more bearable late in the story once bad things start happening to them, the dialogue for most of the experience is a crippling blow to a game that had the potential to be creative and original. 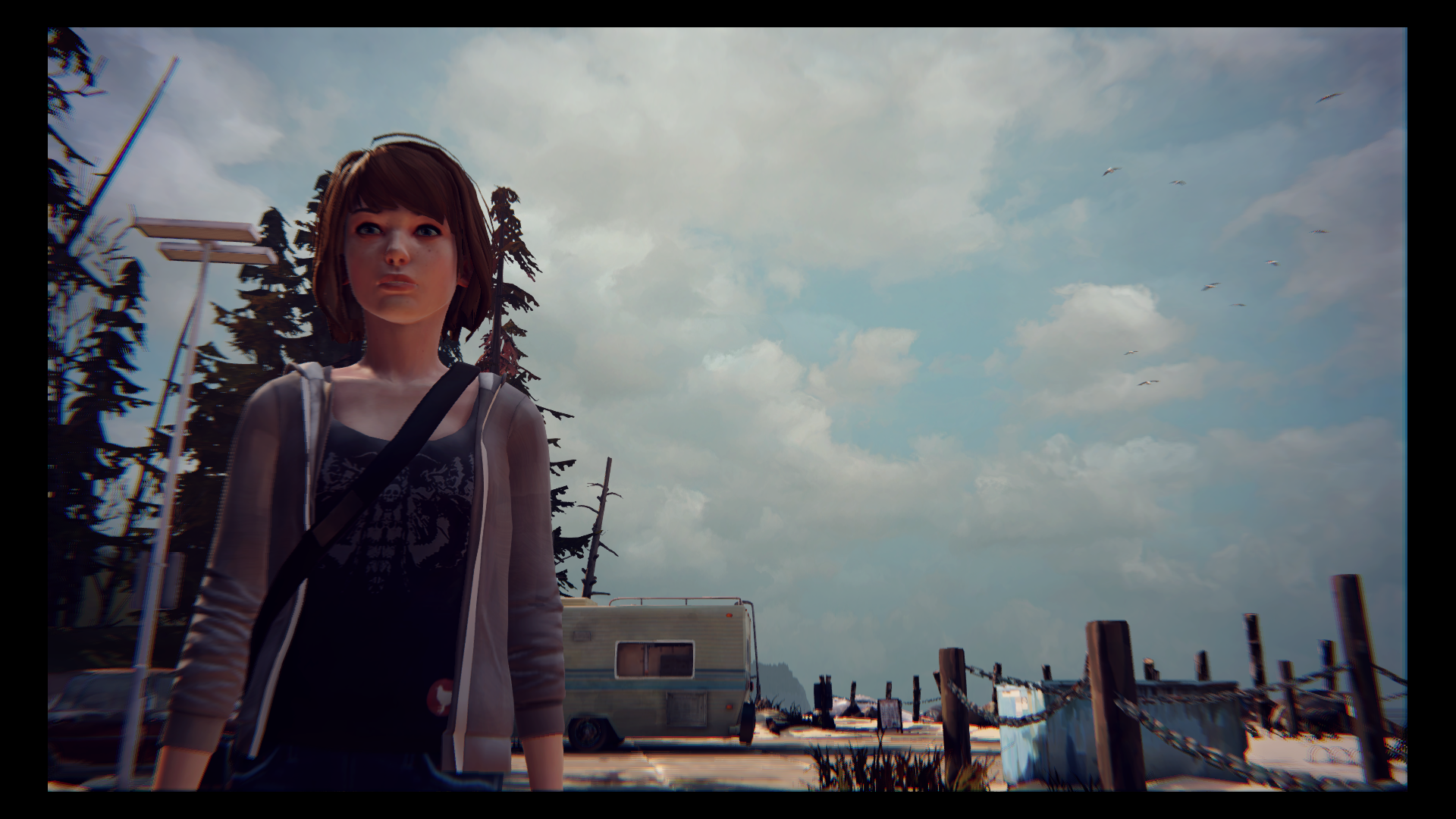 At the core of Life is Strange‘s gameplay and story is its time control mechanic. Players have to manipulate time in order to effectively progress dialogue and solve puzzles. In a narrative choice-based game, the idea of being able to go back in time presents a unique opportunity. But it just doesn’t work, due to the fact that Max’s powers are not logistically consistent, and the rules to bend time depend on what’s most convenient for the game.

To give an example, there’s a scene where Max has to grab some photos from a tall cabinet. Underneath her is a bucket of oil. When Max tries to grab the pictures, they fall into the oil because of her poor reach. Since Max will know how the photos are going to fall, she should be able to catch them when she rewinds time. But because the game wants you to go find something to stand on, Max says that she’ll always make the pictures fall unless she has something to stand on. Situations like this happen throughout the game, and since the rules for time manipulation are so unclear, puzzles become more of a guessing game than a test of wit.

The ability to erase a decision and look at the opposite outcome before proceeding is an interesting experiment for the genre, but it creates a lack of consequence. To compare it with Telltale’s The Walking Dead series, there’s a timer on every major decision and dialogue in order to give a sense of momentum and urgency. Players don’t have time to thoroughly think through every choice, and sometimes you make a regrettable decision. But such is life, and it’s what fans love about those games.

In Life is Strange, not only can you reverse a decision as many times as you want until you’re satisfied, but Max will doubt whichever choice you make by suggesting how the other outcome would have been better. It feels like either path in a major decision is wrong, and the game spoon-feeds the player a sense of doubt rather than allowing them to discover it for themselves. 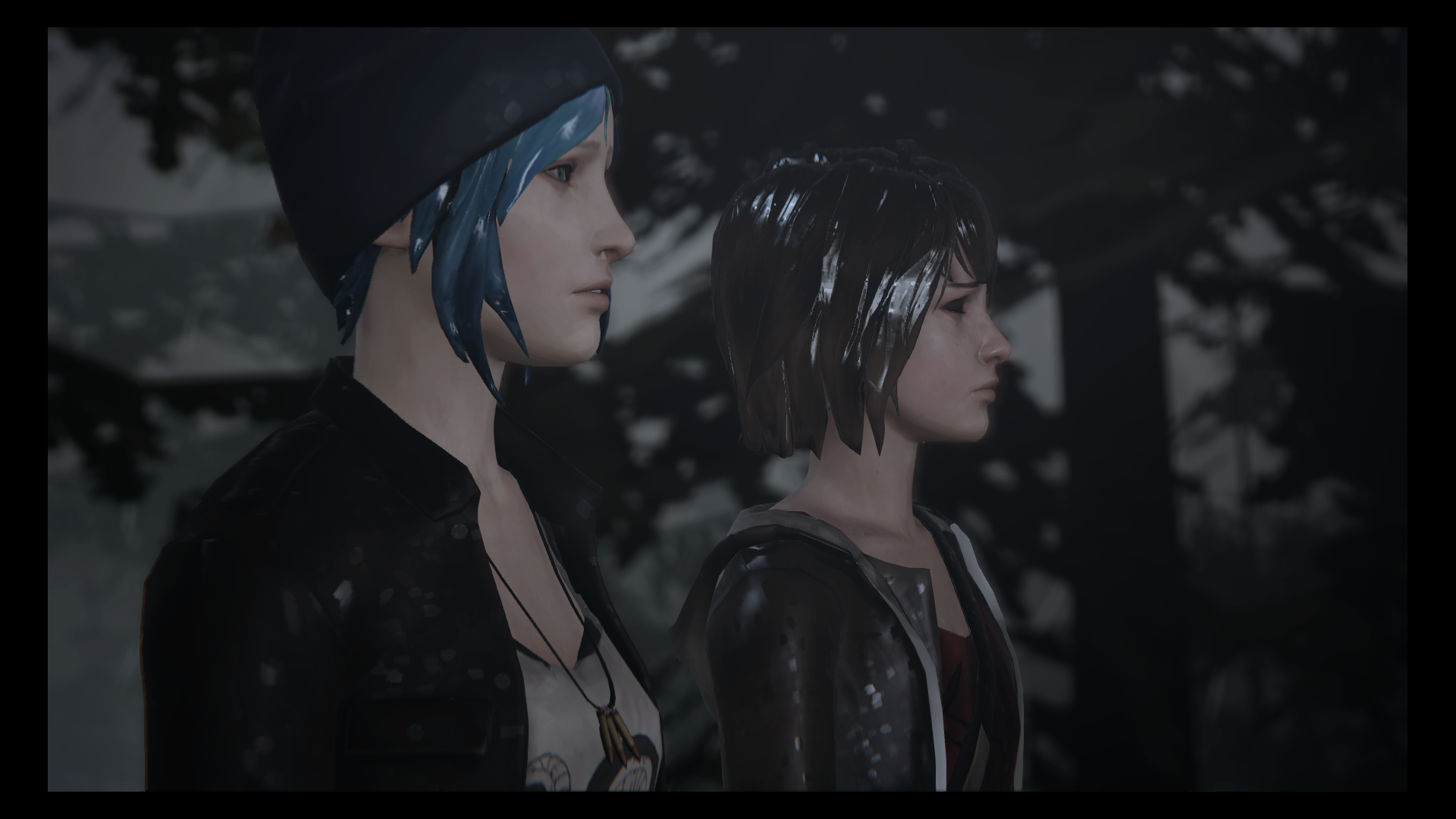 There are some areas in which Life is Strange excels. While some might call it pretentious, I thought the indie/folk soundtrack helped establish the unique tone the game was trying to achieve. And the last act of the story is engaging, despite being a bit ridiculous.

But there’s so much crap between Episode 1 and the finale that it’s nowhere near worth sitting through. It’s a good example of what not to do in a narrative, choice-based game; the dialogue is so cringey that the rest of the story is hard to stomach, and the central mechanic of time-travel makes choices lose meaning and consequence. Life is Strange fails at the two core elements of its genre, which makes any of its other achievements moot.

It’s a shame though, because there was potential for something truly progressive and ground-breaking. And this was neither.