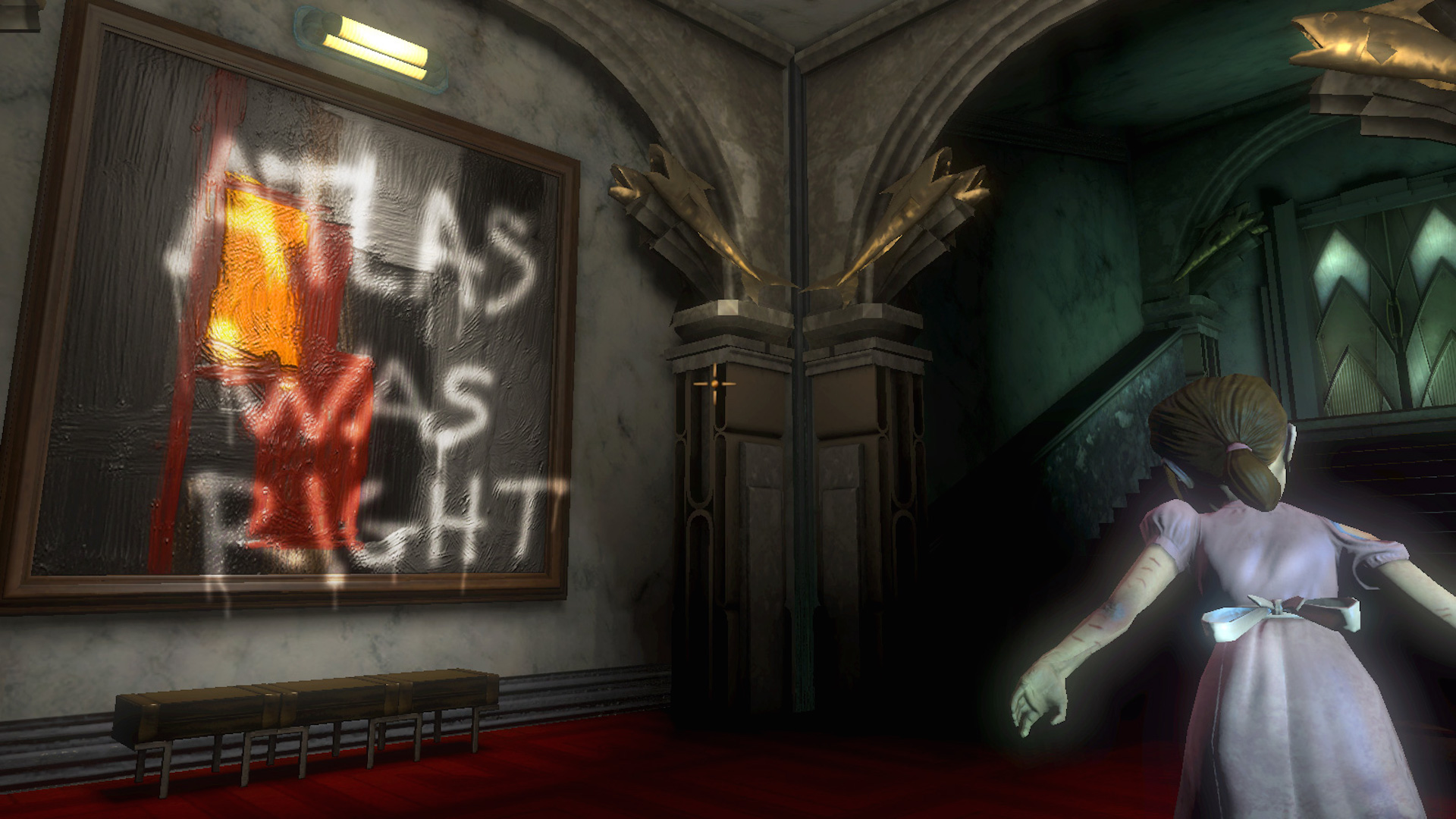 Would You Kindly Play This Game?

Admittedly, this review is old. But I still hold by my words.

A city under the sea held back from regular society. Its creator wanted to keep the government and the church from stifling creative minds, so he made the city as a safe haven for minds trying to be censored. However, the result of wild experiments with no ethical grounds ruined the city. The backstory for BioShock is an intriguing one, both for its political nature and the disturbing decline of a dystopian city. After a man named Jack crash lands conveniently near the fallen city, he discovers the city and its horrors. What follows is a powerfully crafted story with great gameplay and a wondrously designed world that hides more than it lets on.

As mentioned before, the story begins as a man named Jack flies on a plane when it mysteriously crashes in the middle of the Atlantic Ocean sometime in the year 1960. He notices what appears to be a lighthouse in the middle. He enters the lighthouse, which is the entrance to a city known as Rapture. As he enters a bathysphere (submarine) that takes him further towards the depths of the sea, he’s greeted by a video narrated by Andrew Ryan, the man responsible for Rapture’s creation. After the video screen pulls up, you’re greeted to one of the most gorgeous images in gaming. The city of Rapture, designed in an art deco style, is a beauty to behold. Think of it like an underwater 1950s New York, and you’ll get an idea of what it feels like, from fancy neon signs to the cartoony elegance of its advertisements. And that’s not to even mention the grandeur of the interiors, designed solely to enter an idyllic world beyond the threshold of the doors in the midst of chaos and fear. The addition of underwater creatures swimming about such as squids and whales also add to the atmosphere of mystery that envelops the entire game. 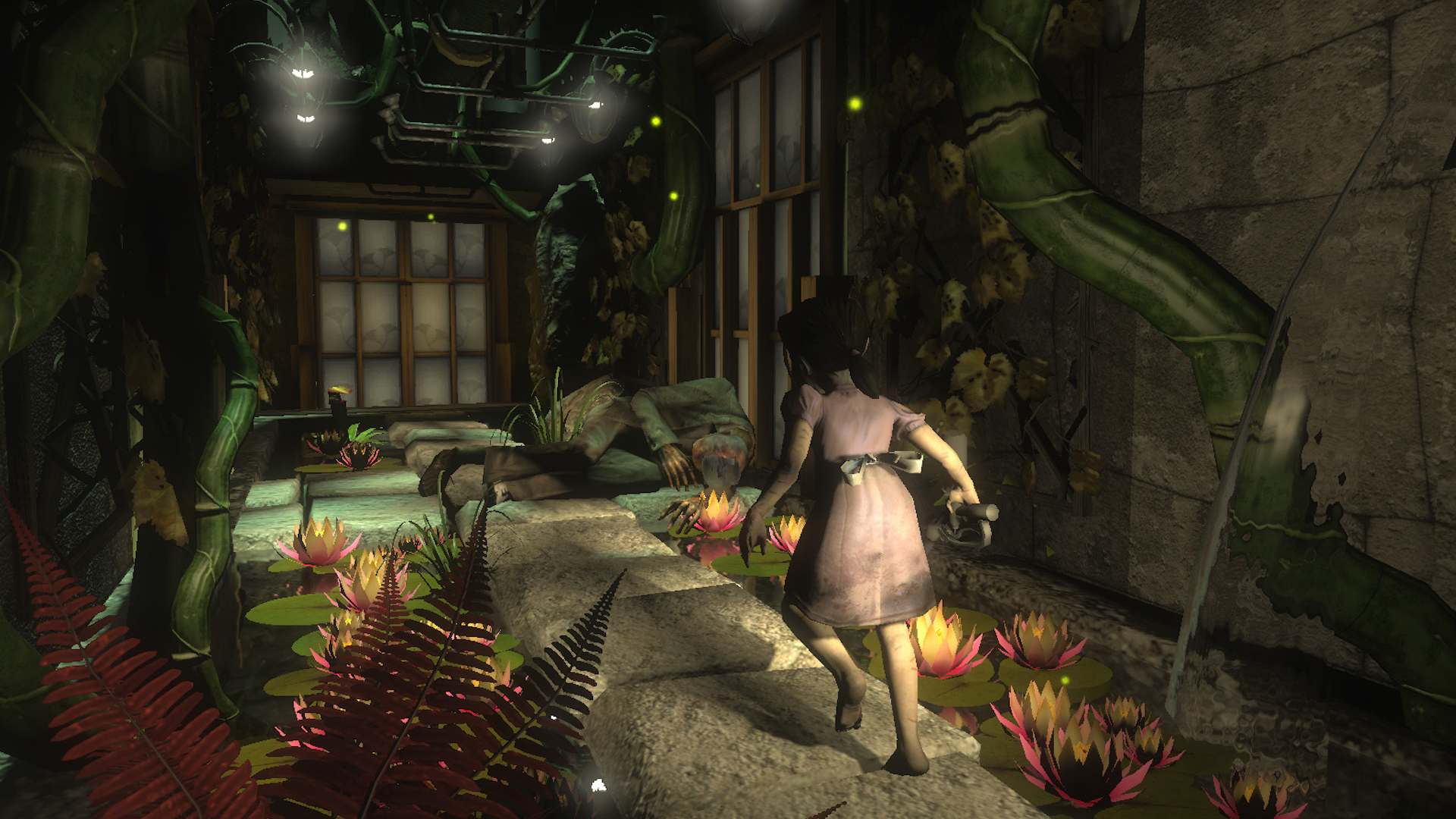 The characters of BioShock are some of the most memorable. First is Andrew Ryan, the charismatic and egotistical leader of Rapture. He always radios the player throughout the game, either taunting you or questioning your motives. He also sends out enemies at you, making him a giant jerk in the process. However, he’s very well thought out as well, as his backstory helps make him a bit more sympathetic than most villains. Another character is Atlas, your Irish-accented guide through Rapture’s many dangers. More characters include the disillusioned Dr. Steinman, the creator of the Little Sisters Dr. Tanenbaum, and the artistically insane Sander Cohen, all of whom give you an idea of what life in Rapture was like before everyone went psychotic. It’s a reminder that too much power is toxic, and that extremism on any side of the spectrum is terrible for all parties involved, no matter what the intentions are.

Adding more to the story are the inclusion of audio diaries that give more background into the rise and fall of Rapture, similar to the audio logs in Dead Space that detail the ship’s downfall. Each one is great to listen to, as the voice acting for each of the in-game characters is superb. The audio also has that static-like quality that older radios had back in that time period, allowing for more immersion into this world. The allow you to hear people going mad from the lack of restraints in this society, and help you follow the road from good intentions to bad blood boiling over into a massive problem. There are deeper messages at play here, but it’s all open to interpretation, as what you hear isn’t always the full story.

The rest of the city is wonderfully detailed as well, with attention paid to the types of architecture, art, music, and interior design used back in the fifties and sixties. Every area of Rapture that you explore is amazingly well-crafted. Looking out of a window even shows you a tiny portion of the city as a backdrop. Even the water physics are some of the best I’ve seen. I wish there would’ve been a way to explore this haven a bit further, but it’s the story and gameplay that drives this experience, not exploration. That said, having some sections where you’re actually in the water just taking in the already impressive atmosphere would have elevated the game even further. The graphics quality on here are stunning despite their age, with only a few instances of texture pop-in. There is an option that allows the game to be played at a higher framerate at the risk of lower visual quality, but the difference isn’t really that much. Unless you look at character models, whose age really start to show with the lack of finer details on their faces, leaving them looking like dead mannequins rather than actual living people. 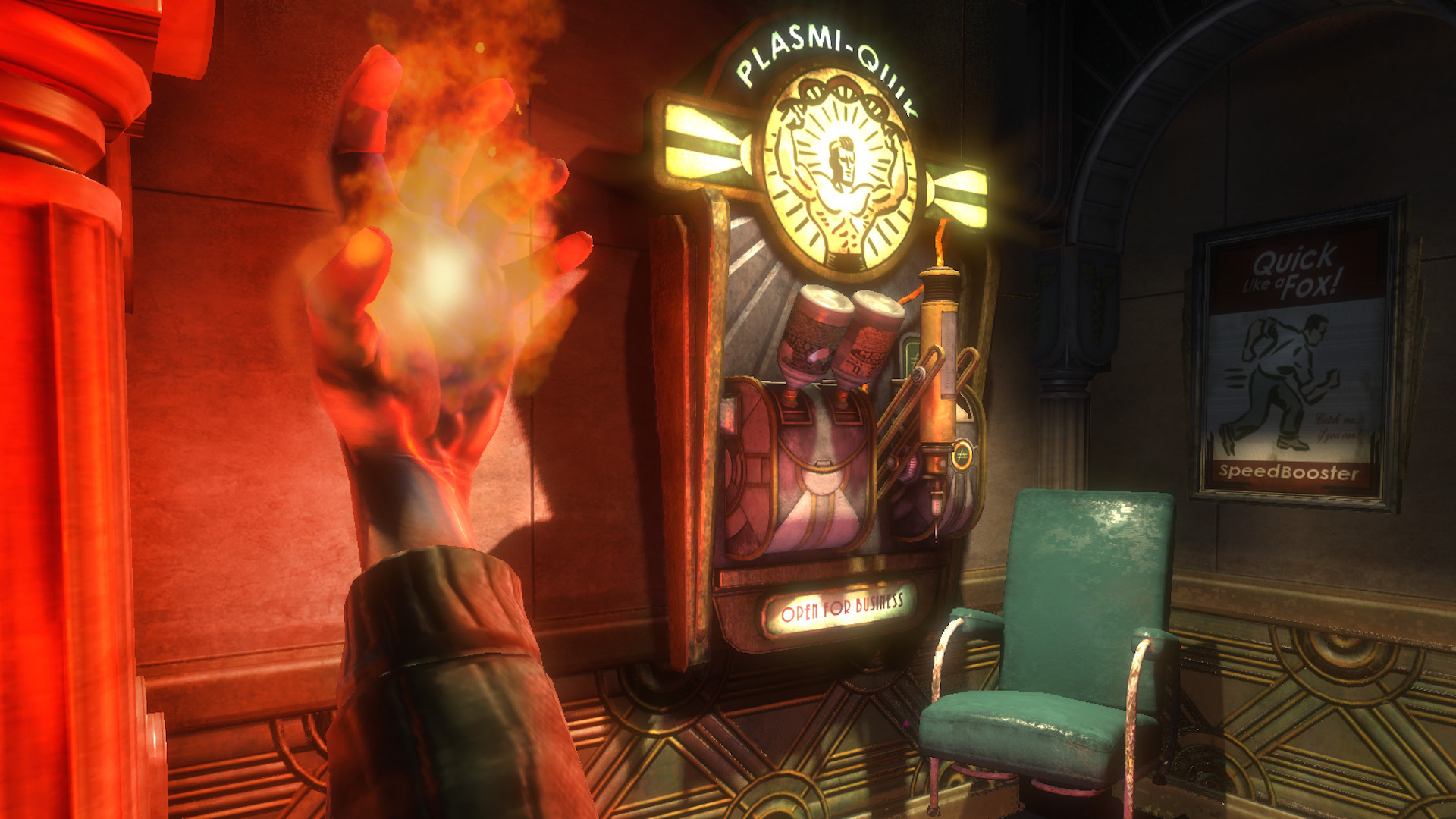 The gameplay of BioShock is your basic First-Person Shooter controls. Jack can use a monkey wrench, a pistol, and several other types of steampunk inspired weapons as he fights his way through the crazed, mutated citizens of Rapture, who are called splicers that also have many unique abilities such as teleportation, pyromancy, and wall-crawling. Added to this is the use of Plasmids: genetic modifiers that allow the player to wield lightning, fire, telekinesis, and several other supernatural-type powers that allow for more strategic combat options, especially on harder difficulties. There’s no dual-wielding, however, as the main character is one of those everyman types who can’t hold a gun in one hand, but that doesn’t necessarily limit the possibilities of the gameplay, since switching back and forth between guns and plasmids is quick and easy. Should you die, however, you can use things called Vita-chambers that can revive you at half your overall health, but without any of the items you’ve used up during the battle. This system does make the game a bit easier to play as enemy health doesn’t go back up, but that doesn’t keep you from dying a lot when things get rough.

In order to use the power of your plasmids, however, you must find ADAM: the catalyst for genetic modification in this dystopian city. The way to find it is to take it from Little Sisters, who have been genetically modified to host the creatures that contain this material. However, everyone else wants it too, so be prepared to fight if near one of the little girls, especially because they have guardians known as Big Daddies. These diver-looking behemoths guard Little Sisters with their lives, and know how to fight as well. Big Daddies are definitely some of the most ruthless video game antagonists I’ve ever encountered, as their size, surprisingly fast speed, and numerous types make them challenging foes, which can’t be said as much for the rest of the enemies found in this game.

Taking care of these brutes proves rewarding, however, as you then get access to the Little Sister, whom you can choose to harvest for maximum ADAM, or save her for less. The choice here is yours. Harvesting the little girls allows you to buy multiple upgrades, making the game infinitely easier for later levels to come. Saving the girl gives you less ADAM, and makes the game harder due to the limited amount of plasmids you can buy. However, every three girls you save gives you a reward, so the choice really depends on how easy or challenging you want the game to be, and proves an interesting moral choice in the mix. However, after continuing through the game further, I realize that this might not have been the right choice, given that the overall theme of the game is how power can corrupt and destroy even the best intentions. Jack is only trying to survive the city, not save it, but along the way nothing ever gives you the feeling of wanting to save anything or anyone down there, so having that moral choice bogs down the ultimate deconstruction the game is trying to succeed at. 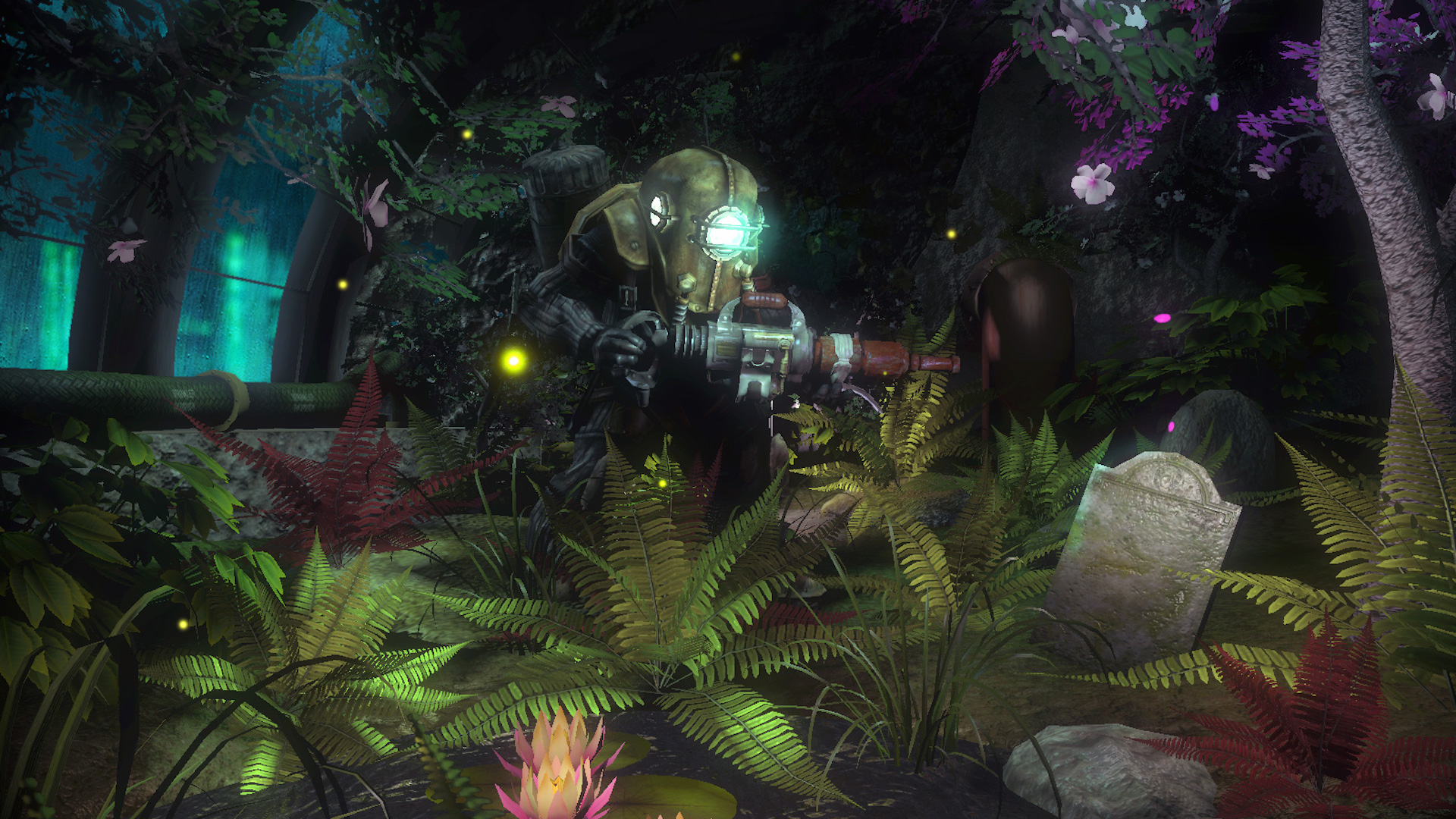 ADAM doesn’t buy ammo for your weapons though, and that’s where money comes in. You can find money in crates, bathroom stalls, and on enemies, which you can use money on vending machines, where you can purchase first-aid kits, EVE hypos (the fuel to power plasmids), and extra ammo for your arsenal, which can also be upgraded from various machines found throughout the areas you find yourself stuck in for a time. You can also hack the machines in a pipeline puzzle that can give you discounts on your purchases and even give you some free stuff in the process. Those puzzles are about the least interesting thing and the game, and could have been avoided entirely, as they don’t fit the theme or the aesthetic of the rest of the game.

What also doesn’t fit is the final act of the game. After the major twist of the game, everything just starts falling apart. You’re given little to no reason for staying in Rapture, and yet you’re forced to in order to continue serving the wishes of the corrupted citizens of the city, which, given what happens during the twist, seems incredibly forced. Plus, it introduces some of the worst elements of the game that I should spoil, but won’t because I’m a nice guy. Let’s just say that the lead up to one of the two endings of the game (dependent on whether or not you harvested or saved the Little Sisters) is by far the weakest point of the entire game.

All of these features make BioShock one of the best gaming experiences out there, even if its flaws start adding up when you really think about them. Overall, it’s the terrific gameplay, a uniquely immersive storyline, beautiful graphics, and colorful characters all transform a basic shooter into something much more. Combine that with one of the most haunting and shocking story twists in recent gaming history, and you have yourself a cannot-miss game. Don’t miss the game that really put the gaming medium forward in terms of artistic quality.