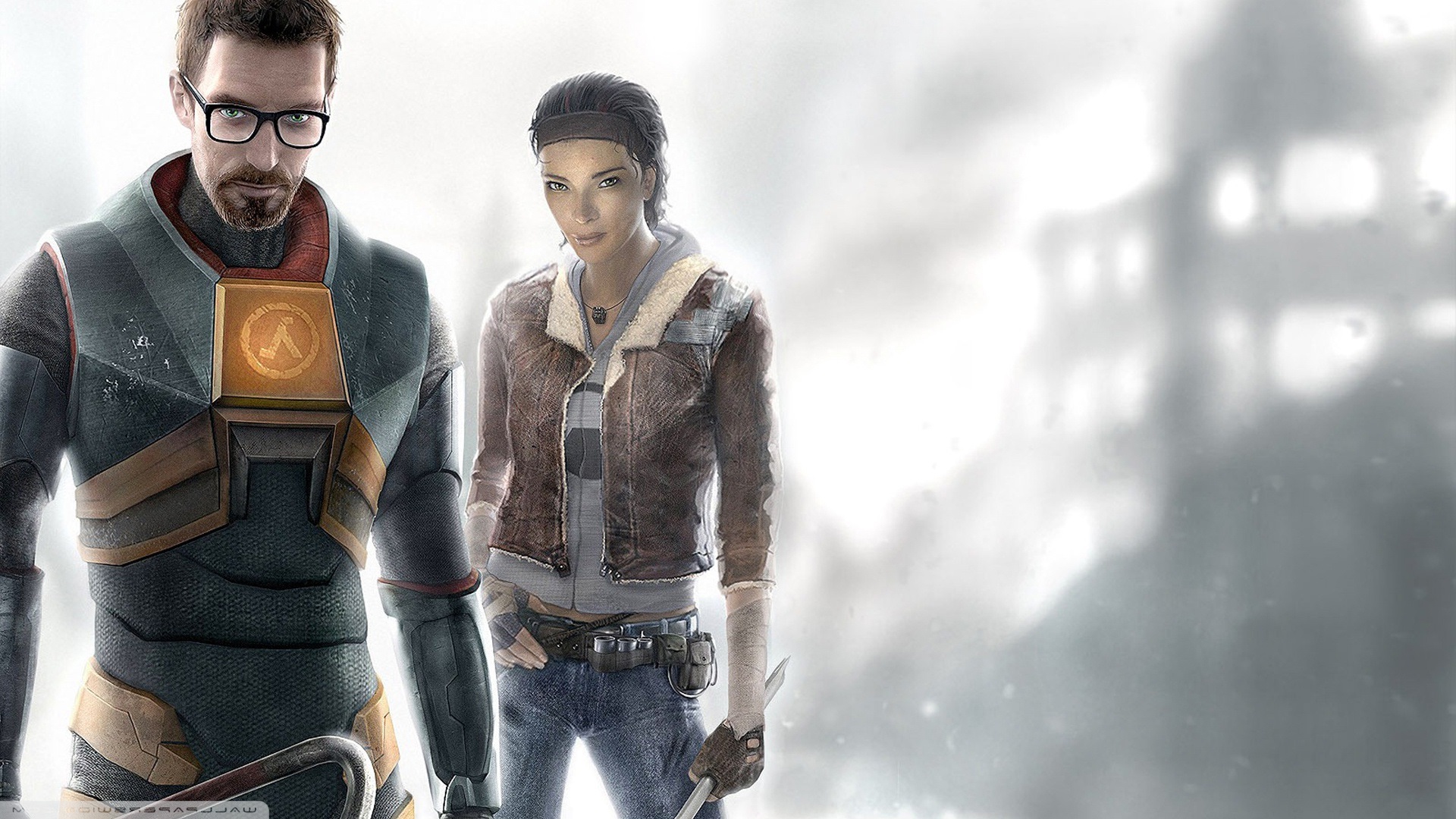 Yeah, what exactly made this game so incredible? Cuz I don't see it.

There are many kinds of ways to do a dystopian sci-fi story, but few tell it in a way where the environments, you interactions with it, and the people you encounter mean more than any of the backstory or lore that can possibly be introduced. The Half-Life universe tends to do this more so than any other, and Half-Life 2 attempts to continue the success of this narrative method. While its intentions are admirable and often times successful, Half-Life 2 seems to make little effort in pushing you along its story apart from moving you to the next section of gameplay, and not giving you motivation to care about anything, in spite of its well-done design and ambitions, leading it to be a bigger disappointment than I was honestly expecting.

Half-Life 2 begins roughly twenty years about the events of the first game. You play as Gordon Freeman, a physicist who has a problem with saying things, waking up from stasis inside of City 17, one of the many cities taken over by the Combine: an alien empire bent on enslaving the human race for unknown reasons. Freeman must discover the reason why the Combine want Earth so badly, and with the help of a human resistance group and some friends from the previous game, remove their control over City 17.

Right when the game starts, a sense of oppression immediately washes over you. You see citizens being corralled by the Combine, others being forced into hiding, Combine soldiers holding random searches over people’s homes, and many other atrocities. The color scheme, which is a well-built palate of grays, browns, and the occasional bloodstain, emphasizes the plight of the humans and their torture. Various sites like floating cameras, guards at various corners, and even security checkpoints further shows the crushing rule of the Combine in this city, as well as gives you an idea of how things are in the rest of the world, if that. It also helps that the game’s graphics engine helps make things look just a bit more realistic in terms of lighting, textures, and character models. Even ten years later they still look good, even though the game’s age is definitely showing.

And yet the environments aren’t the only thing telling the story, as you do come across many helpful characters along your journey, both ones you know and new blood. You see Barney Calhoun, the security guard who’s Freeman’s best friend, and Eli Vance and Dr. Kleiner, fellow scientists, as familiar people aiding you the same way they helped in the first game, and each having the same bland personalities they’ve always had for me. Aside from a few quips here and there, I found none of what each person says or does particularly interesting or memorable, and made me feel their only purpose is to assist with moving Freeman and the plot along.

Not that Gordon Freeman helps out with the story at all, as the developer’s decision to keep him silent still persists in this game, and is arguably the most frustrating thing about the game for me. He says absolutely nothing, being only a shell for the player to insert himself into the game for immersion. I would normally be all for this idea if not for two glaring issues: Freeman has an established backstory as a renown physicist—which most people cannot relate to as they’re not physicists themselves, myself included—and has an iconic appearance that is never seen outside of the game’s concept and box art. In situations where any other character would have a few words to say, the game decides to make things “interesting” by toying with his mute nature to provide humor. It doesn’t. It just makes things awkward for the NPCs talking to him and the player, and creates an immersion breaking experience.

The only character worth noting is Alyx Vance, Eli Vance’s daughter, and by far one of the best characters in this game, as well as in the entire medium of video gaming. She gets some of the best lines in the entire story, is agile and able to climb just about anything, and will even assist Freeman in some sections of the game as partner rather than an escort. Combined with her excellent animation and modeling, as well as her impressive AI behavior, she makes most encounters in the game enjoyable where they would otherwise be mundane.

So what kind of a game is this, anyways? It’s a first-person shooter, plain and simple. You walk around, interact with objects and people, and move from level to level while occasionally shooting down Combine soldiers and whatever kind of creatures decide to want Gordon Freeman as lunch. You have a health bar that requires med packs to heal, and an armored hazmat suit that acts as a supplementary shielding system, radiation detector, and fashion accessory. You’ll need these in order to travel through the dangerous areas of City 17 and its outskirts. I should mention that each level is designed fairly well. No matter which direction you go, there’s no way to get lost in any level, as the game subtly gives you hints as to where you go without you ever thinking about them. There are hidden rooms to acquire more ammunition and health packs, as well as giving you room to breathe after a big fight or tricky puzzle.

The game is paced out so that you never receive more weapons than you need at a time, but your choices are pretty basic for the majority of your game. You get a pistol, a machine gun, a shotgun, a crowbar melee weapon, and various other types of weapons to add to your arsenal. The weapons feel about as powerful as can be expected, but aside from that, there’s not a single weapon that feels memorable in the slightest.

A change of pace for the game, however, is the introduction of the gravity gun: a device that allows you to pick up and throw objects from greater distances as opposed to manually doing so with your hands. As fun as it is to drag boxes and corpses across the dirt and then chucking them across the screen, I never felt the need to use it aside from the puzzles that require its usage. And even so, the puzzles feel cheap and uninspired. You pick up objects with the gravity gun, place them either on a seesaw or between certain platforms on water or dangerous terrain, and walk across, no real thought needed. I understand the need to test out a new engine (in this case, it was Valve’s recent Source engine), but having you basically testing the physics of an engine over and over just gets tedious and boring after a while.

The same can also be said about the more combat oriented sections of the game. You meet up with numerous Combine soldiers, machines, and even people infected by headcrabs: an alien creature that feeds off human brains and essentially turns them into zombies. Some will shoot at you, others will try to bash your skull in, and the headcrabs themselves will attempt to fuse with your mind. The headcrabs and infected humans behave much like you’d expect. The crabs will leap and try to latch onto you while the zombies will limp towards you and try to beat you down into submission.

Where the AI truly suffers, however, are in the supposedly trained Combine soldiers. It’s bad enough some of them just stand in the middle of a room and take minor potshots at you, just waiting for you to end them right then and there. It’s even worse when they don’t do a single thing and stand there looking creepy and menacing, either towards the wall or directly at Freeman himself. While Combine machines and alien creatures do pose a threat, some of the Combine themselves feel more like cannon fodder and behave as though they’ve been lobotomized by headcrabs themselves. I’ve seen moments where they do show intelligence, ranging from taking cover and stacking units on top of each other as a form of backup, but the constrained level design, which forces the player through narrow, mostly linear corridors, this isn’t used to its fullest. If you’re going to introduce an intelligent AI, make sure you work your level design around such a feature, instead of building a level first before introducing enemies.

Even more poorly handled are the vehicle sections in this game. In two large chucks of the game, you control an airboat and a modified dune buggy, respectively. When accelerating, things aren’t so problematic, but turning becomes a hassle as both vehicles feel like you’re sliding on a skating rink wearing sticks of butter on your feet. You slip and slide all over the place, and even the sharpest turns result in over-corrections that cause you to go where you don’t want to go. And as heavy a role that physics play in this game’s engine and mechanics, it boggles my mind that each vehicle can still travel across difficult terrain without incident and jump off ramps while giving the finger to any sense of momentum you would expect them to have, either dropping off after getting off the ramp, or actually getting onto a ramp at all with the airboat. And since these segments take up about a third of the game for both vehicles, this is a rather glaring problem.

As for the sound design, everything is fantastic. The guns sound great, the voice acting from speaking members is superbly done, the background noises and sounds are all mixed well and further advance the great atmosphere of the game. There are no errors to speak of, and if I did find any, it would be due to the age of the game and not out of any oversight or bug in the game itself. It’s a treat to listen to as you travel this world. I wish I could say the same about the soundtrack, as I can’t remember a single piece from any moment in the game.

At the end of the day, I can legitimately see what made this game appeal to so many. The world is interesting to travel through and see, the characters have their own charm to them—with special praise towards the great Alyx Vance—the gameplay is well done, and the atmosphere oozes tension. That being said, I myself cannot get into it. With its gimmicky puzzles and gravity gun, problematic AI, poorly handled vehicles, and narrative flaws, I can only see this game as “good” instead of a masterpiece that everyone has placed on a pedestal as the “greatest game ever made.” Its age is showing, and that is not for the best. I wouldn’t dare call it a terrible game, as many segments get me pumped and some of the story details still intrigue me to this day. Just don’t expect a glowing gush from me whenever this game is mentioned, as it is merely good at best, and painfully average at worst.