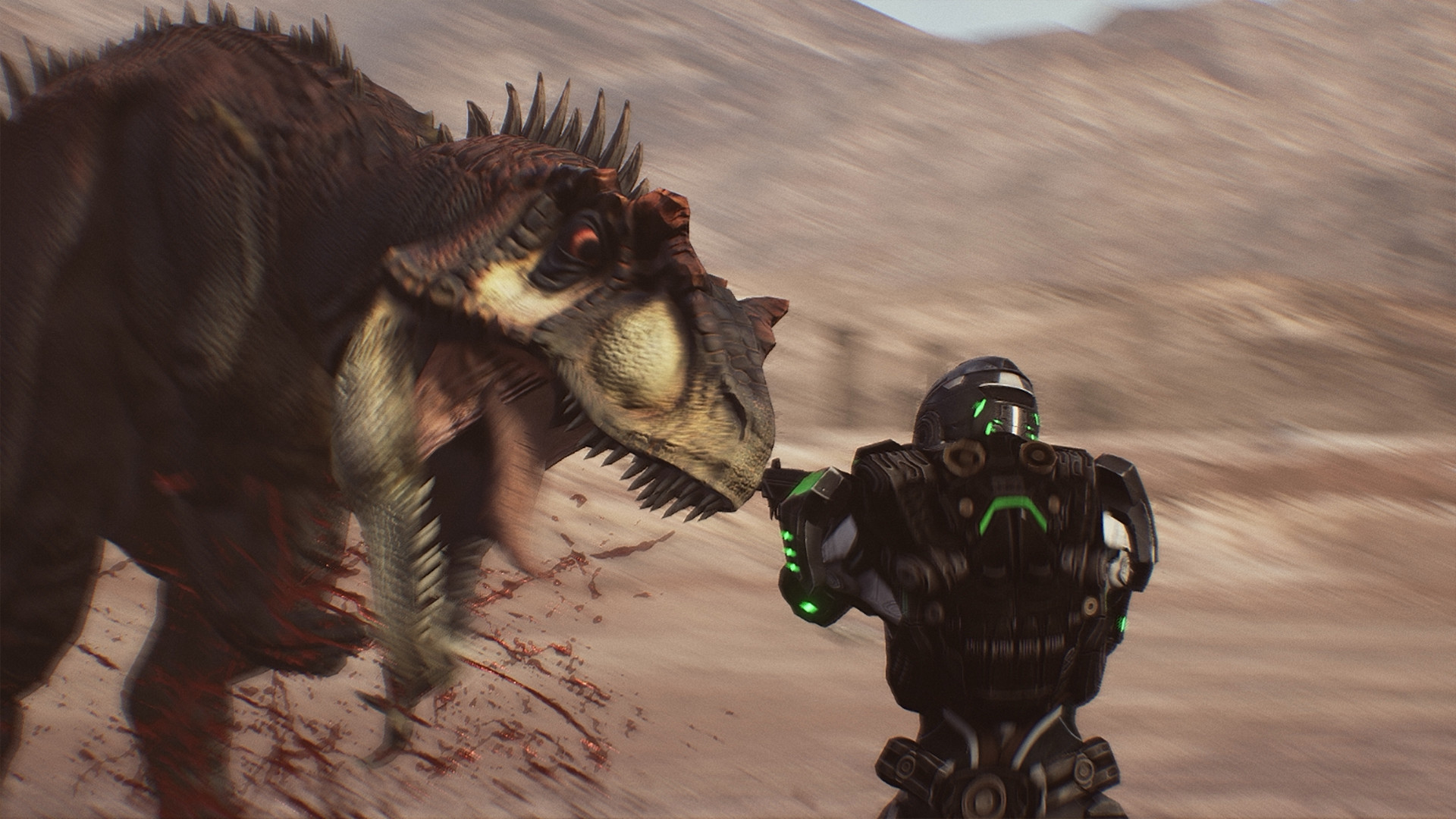 Dino shooter for $1? Take my money!

I’ve had a long and complicated past with Guardians of Orion. It all started in 2015 after I received Orion: Prelude from a friend. It was a great game and got me hyped for the developers next project.

And that project came in the form of Guardians of Orion, a game that was about to change my life and shape my future. I came in during the summer of 2016 which was (in my opinion) the peak of GOO. It had everything you could ever want from a dino shooter. The guns, classes, items, crafting, enemies, progression and graphics were perfect to me and it completely blew my mind. How could a game that costs $1 be so good? 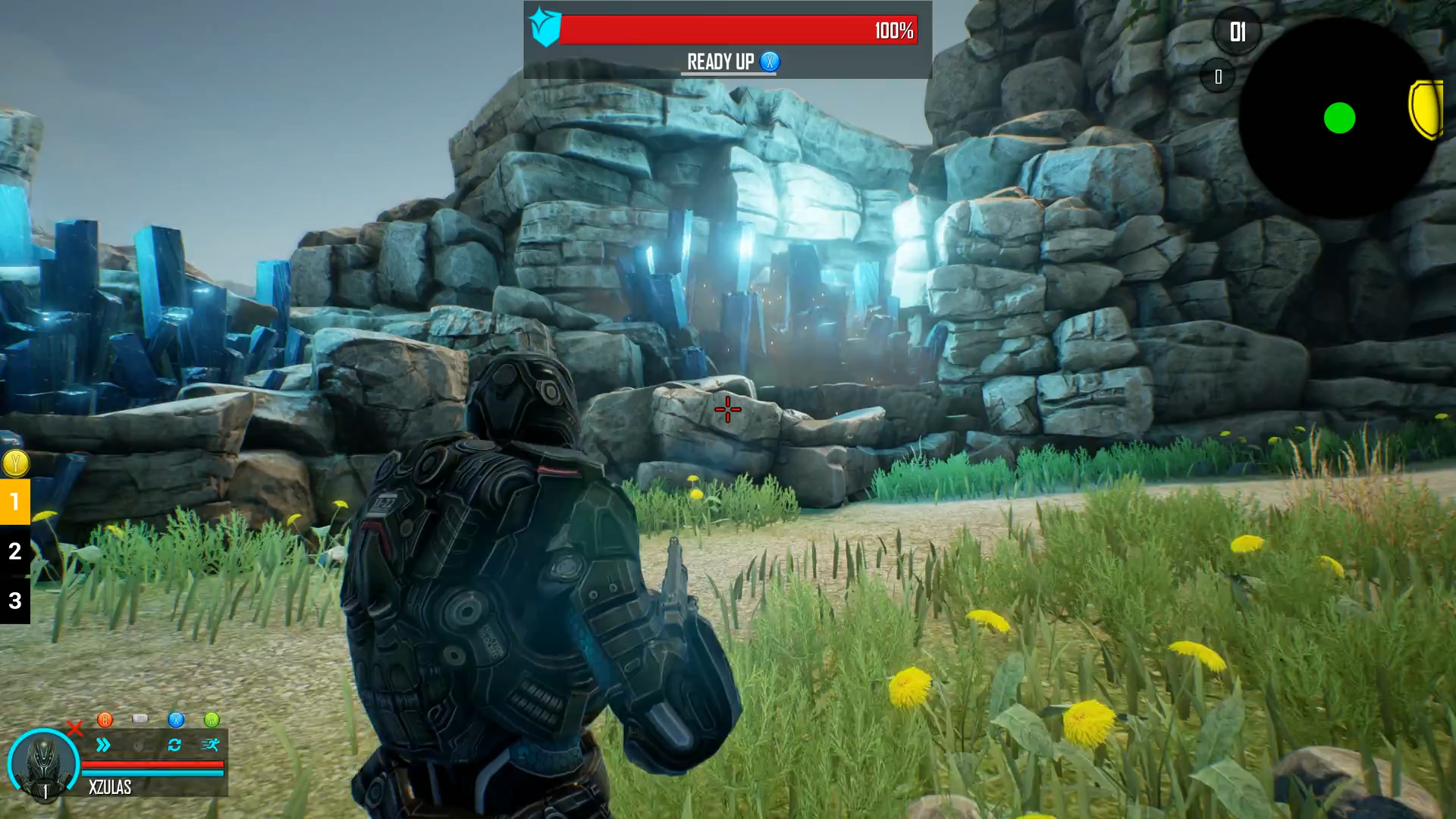 I kept playing until December 2016/January 2017 when the highly anticipated update 2.0 was imminent. The update was delayed for a week and when it finally came out it broke the game. Shortly after that, the developer went silent for a few months until returning. This put me off the game and was the end of a good time during my life since GOO was a game where I met many people who are still my friends to this day. It also helped me get my foot into video game journalism as I actively took part in the development and had regular chats with the devs. I became a part of a community that is still going.

So now that you know my background, here’s the review. Stick around at the end because we’ve got 5 copies of Guardians of Orion to give out.

Guardians of Orion is a top-down shooter developed by Trek that takes place in the distant future where everyone kills dinosaurs in space. The result is a relatively polished shooter but the real gem in GOO is the features. For example, the game has the option to switch between first person, third person and bird’s eye view without any lag or cutscenes necessary which (in my books) is a first in a video game. 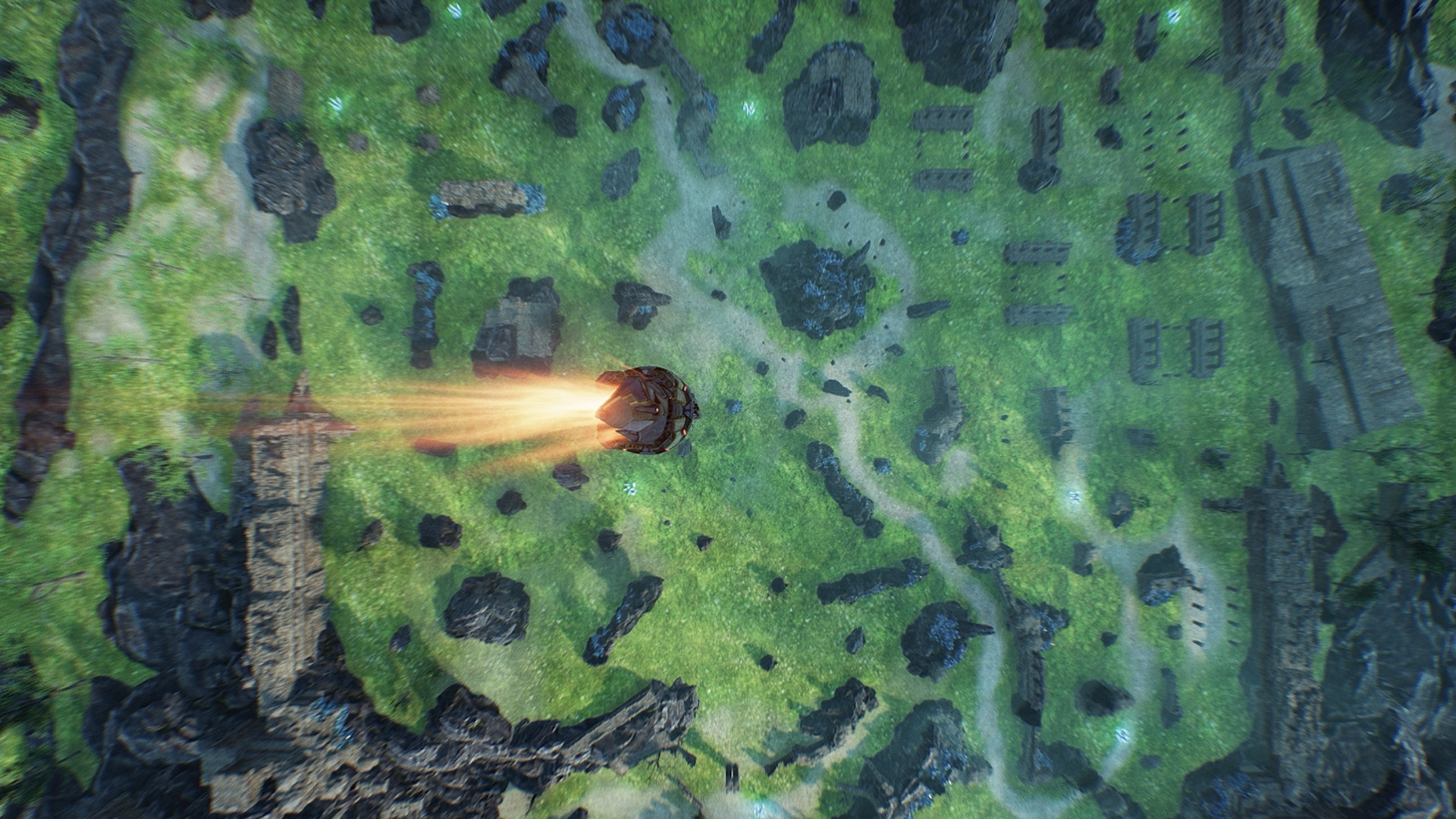 The crafting system is also a marvel to behold. Consumables (medic packs), gear, loot boxes, Gems and various other bits and bobs are all craftable using drops from enemies.

Raptors, T-Rex’s, Velociraptor. You name it, Guardians of Orions has got it. The enemies are a hit and miss when fighting. Sometimes you’ll encounter aggressive and challenging dinos but other times the T-Rex won’t even look you in the eye. This is a glitch I presume and is one that ruined the gameplay. In terms of difficulty, the enemies scaled with the difficulty setting which goes from easy, medium, hard to redikulous.

Gear scaled using an item level system that corresponds to the level of the player. For example level 50 (level cap) players should be maintaining a level 600 item score in order to avoid getting their ass whooped in combat. This system is heavily flawed as higher players can mess up the level items of newer players. Speaking of other people Guardians of Orion can be played completely solo or with up to three other friends and the multiplayer is definitely one of the features that make the game shine out of the garbage pile that is early access shooters on Steam. 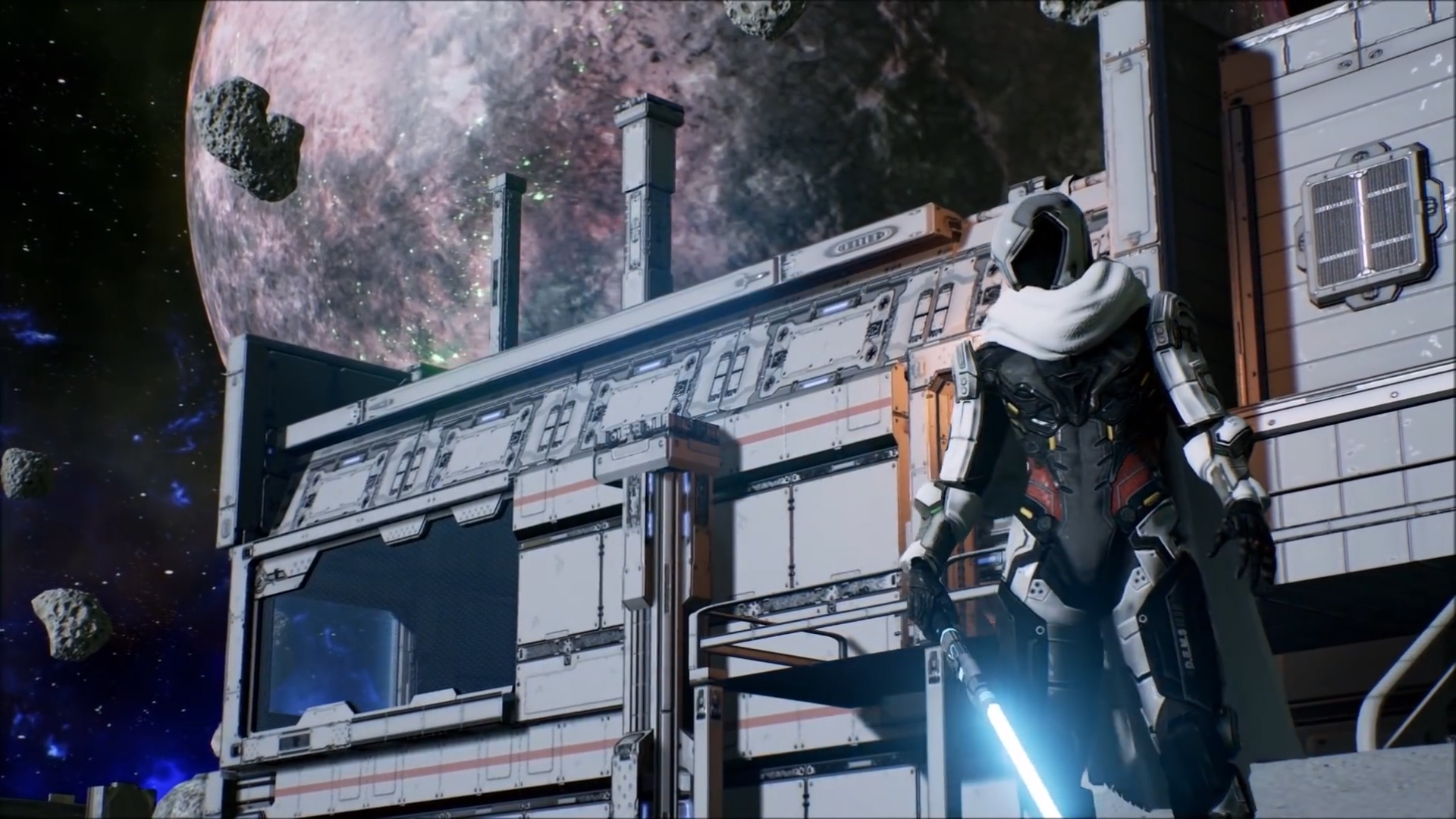 Each class has its own unique trait. For example, the tech class has a deployable turret, the pyro has a sick ass flamethrower and the warrior has a ‘blade’ which looks suspiciously like a lightsaber. Weapons are also exclusive to characters.

In GOO there are four game modes. harvest, survival, FFA and dogfight. Harvest is the most popular out of the four and tasks you with protecting a machine harvesting crystals. Dinosaurs come in waves with 12 waves total two of which are special rounds that contain crates at the end if you can complete it in the given time period. Each level ups the enemy headcount which makes it more and more difficult (than it already is) to keep the harvester up and running.

Survival is similar to harvest only the waves are infinite. Enemies are strong and unpredictable. FFA is a battle royale that takes place over a massive map where players fight to the death to earn the premium currency Trek coins. Every now and then an AI boss appears which the players can choose to fight or continue beating the shit out of their peers or do both at the same time. 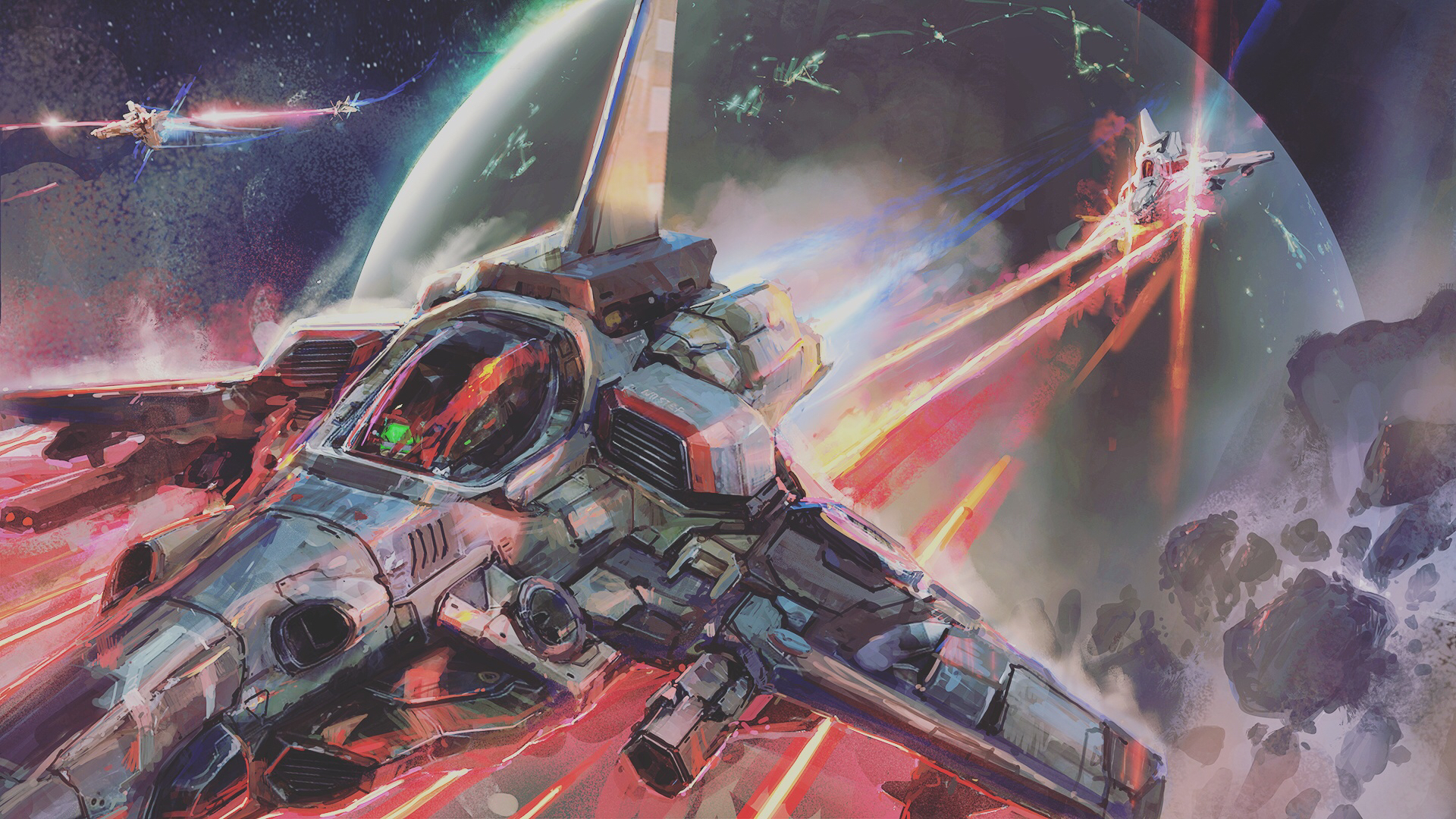 Dogfighting takes the battle to space where you are given a spaceship to (you guessed it) fight even more players! The ships are a joy to fly as they’re simple but at the same time enjoyable. Possibly the best feature in the whole game.

GOO offers a wide variety of maps with over 40 in the harvest mode. Anything from dense jungles to a planet that’s a volcano, the devs really paid attention to detail when it came to level design and that paid off big time in the long term.

For those wanting to play locally or without the online side there is a singleplayer option letting you play with up to 4 people on the same machine or by yourself.

Currency plays a big part in the world of Guardians of Orion; There are two currencies one called Ion which is the most common and can be obtained in almost everything you do in the game. On the other hand, you have TREK coins which is a ‘premium’ but this it’s not difficult to gain TREK coins as they can be unlocked through FFA and weekly challenges which reward 250, 500 or 1,000 depending on the difficulty you choose. These missions are geared towards the higher levels.

Ion can buy you materials and material pouches whereas TREK coins nabs you the cosmetic side of things like headgear, clothing, pets, new characters Etc Etc. Trek leaves the pay to win aspect to the three different tiers. The first being the standard edition of the game which costs a mere $1. For this price, you get the base game with no special awards. The next tier up is the pioneer edition which costs $9.99 and grants access to more guardians, armour sets and 100 more slots in your inventory. The final package is the elite edition that costs a whopping $49.99 and gives you 200 inventory slots , an exclusive set of armor complete with your own pet and a 50% discount on all items in the store. Loot crates are also available with wood, bronze and gold crates. Wood ones can be unlocked by just playing the game whereas bronze and gold have to be bought with real cash. 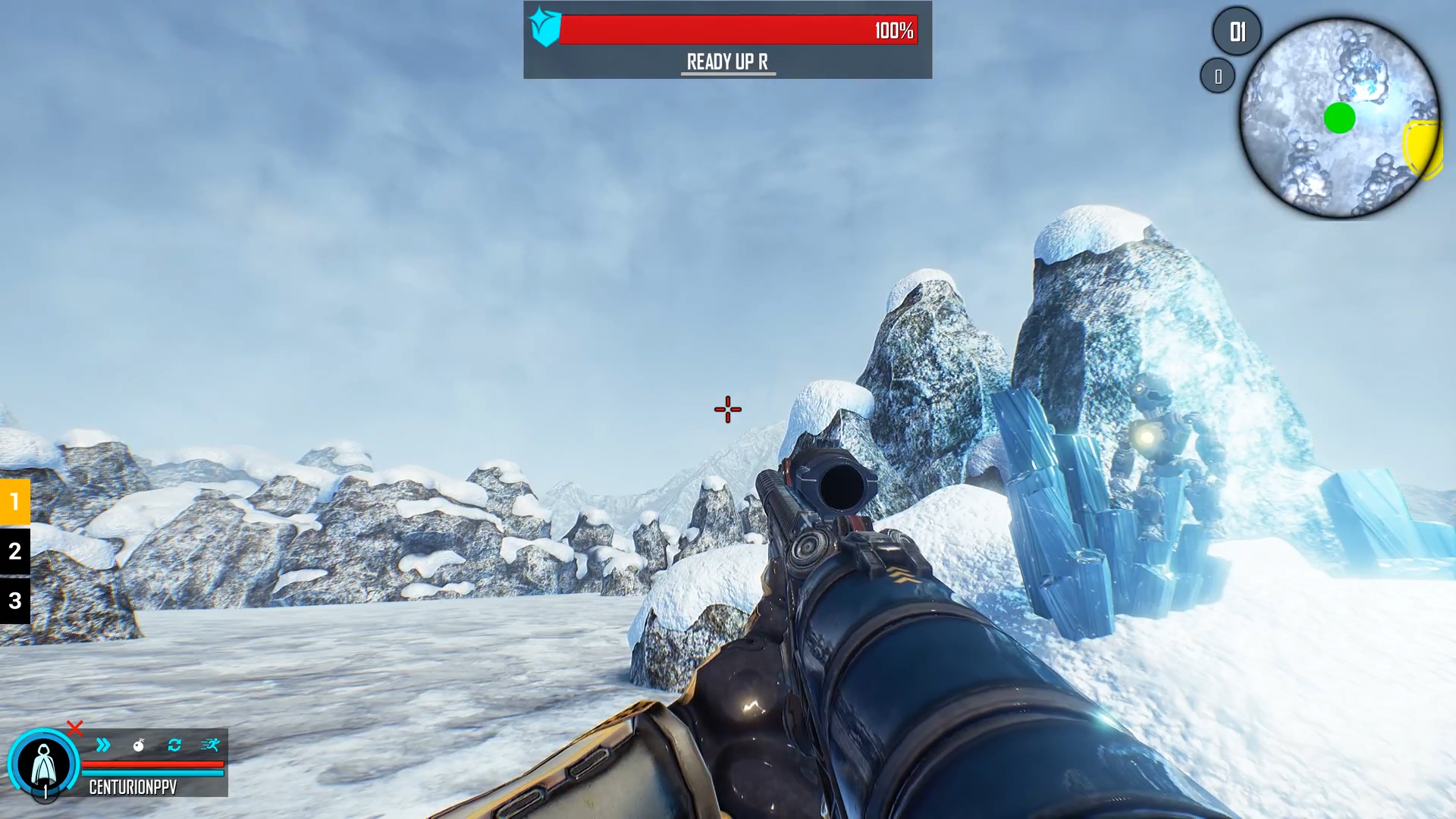 Of course, we have to talk about the elephant in the room which is the fact that the game is now no longer being developed. Nonetheless, Guardians of Orion is a stellar example of what can be achieved in video game design when someone has a vision. The devs worked day and night to create their idea although they ultimately, in the end. However, they are confirmed to be improving and building on what made GOO more than just a $1 dino shooter.

Needless to say, Guardians of Orion is of course in a somewhat playable state with regular users playing. The devs have agreed to keep the servers open for the foreseeable future as they actively encourage users to jump into the action.

While GOO isn’t perfect it’s clear to see where the ambition was and that’s what makes the game worth the $1 asking price. Should you get it? Yes. If you’re looking for a dino shooter that you can play from start to finish but if you’re ok with the missing story and just want to have some fun (possibly with friends) then I can’t recommend this game enough.