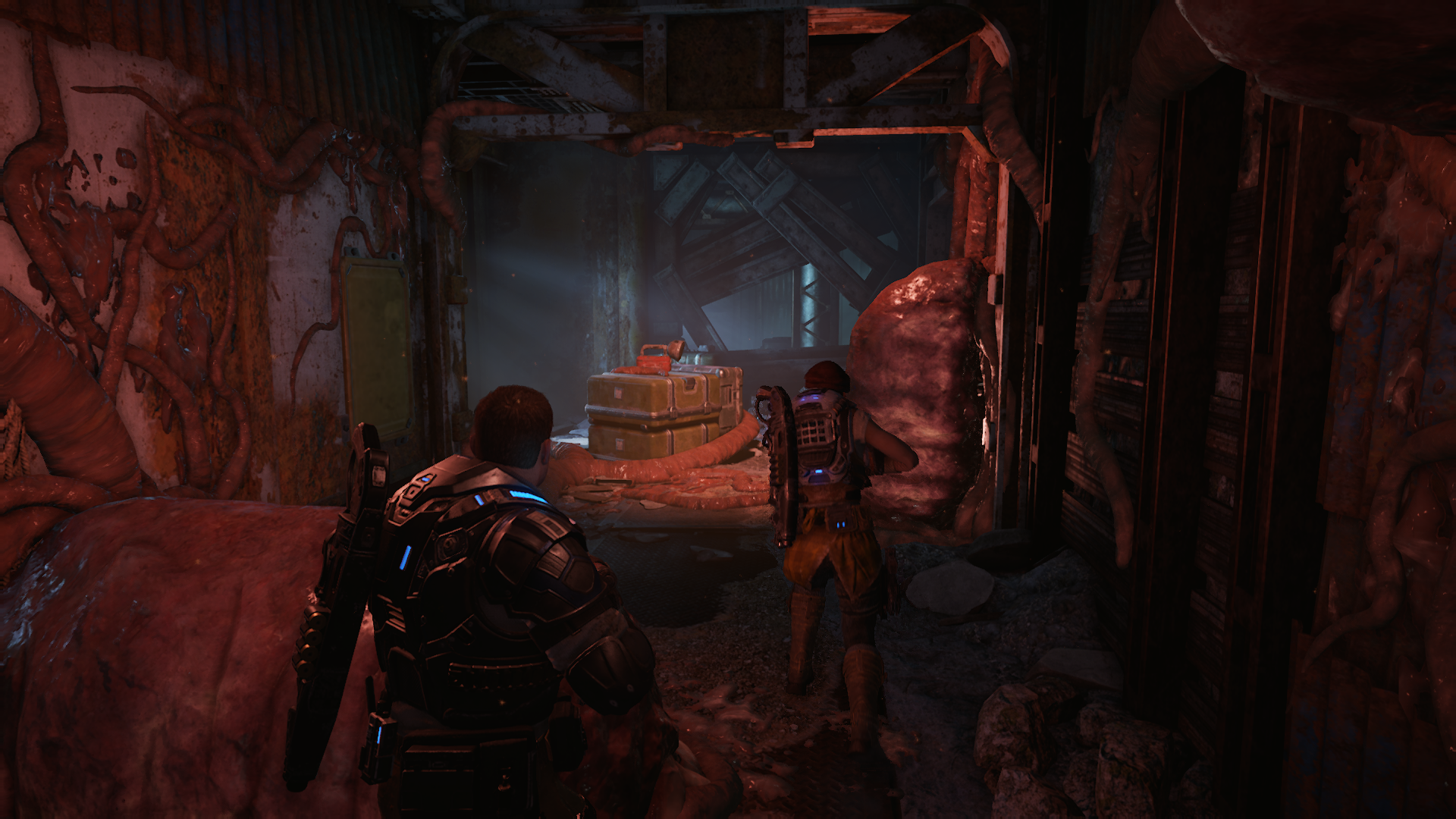 Today in modern entertainment, we live in the age of the reboot. Whether it’s just a soft reboot in the guise of a sequel or a full-blown remake, the best ideas of the past 50 years are being regurgitated for their brand recognition. Most of them suck. But the few that are worthwhile are able to capture the essence of what made the original memorable while putting a creative spin on things.

Gears of War 4 is not a perfect reboot, but it’s pretty damn great. There’s a few new bells and whistles, but for longtime fans, the majority of Gears 4 will feel just the same as the games from the series’ past. For better or for worse. 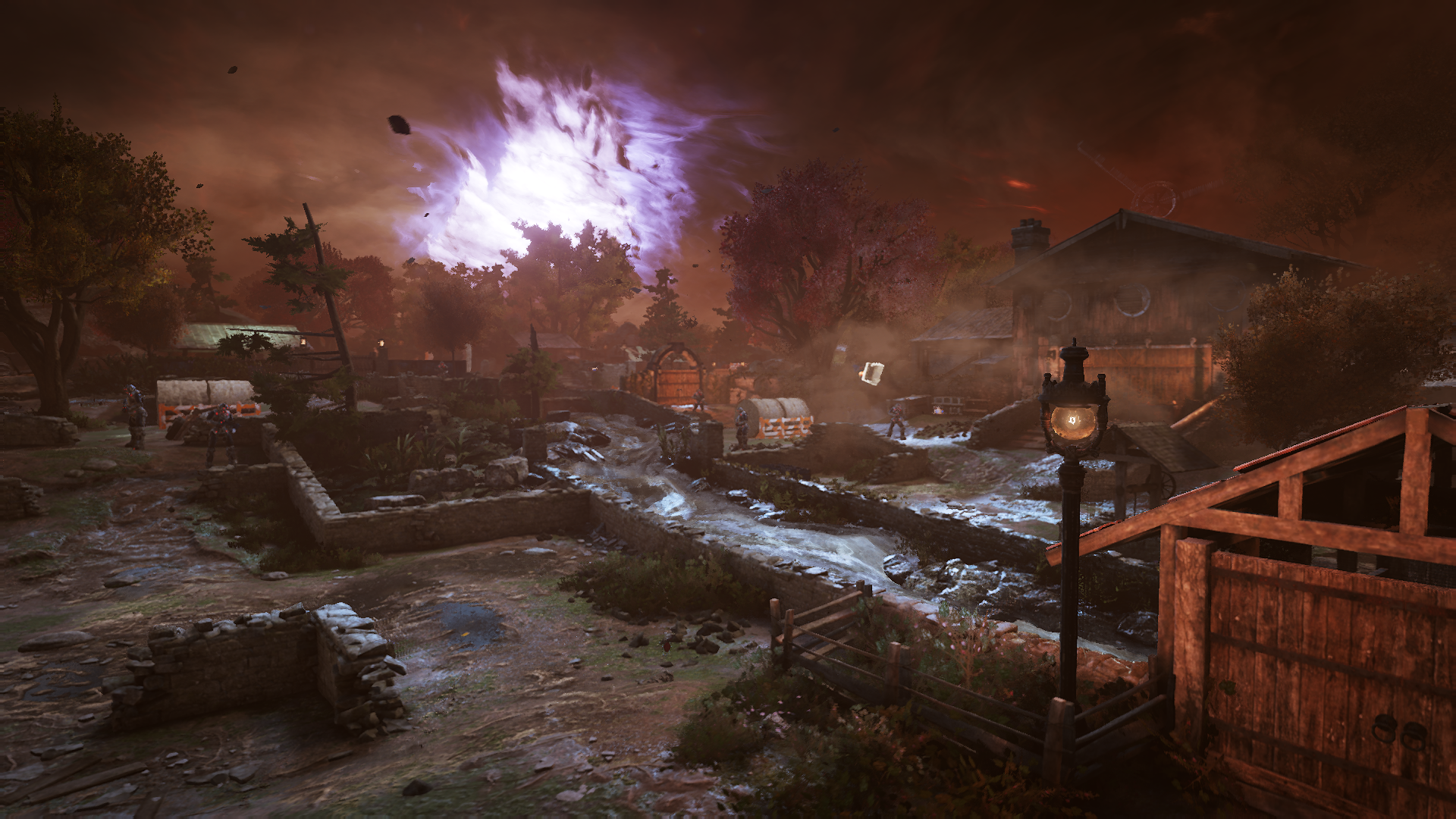 Taking place 25 years after the end Gears of War 3, the campaign of Gears 4 follows the story of JD Fenix, son of former protagonist Marcus Fenix. Having defected from the newly established COG, JD and his two friends, Del and Kait, are living in a settlement that survives on the fringes of civilization called the Outsiders. They live in relative peace, until their entire village is either captured or killed by The Swarm, a horde of monsters not dissimilar to the Locust. JD and his friends set out to save whatever might be left of their friends and family, and to get to the bottom of where the Swarm is coming from.

The narrative is self-aware, focusing on conveying the tone of a schlocky action blockbuster. There were some contrived moments in previous Gears games where you could tell Epic Games was trying really hard to make you feel something, but Gears 4 smartly curbs any forced emotions. There are (seemingly) deliberately cringey one-liners and some awesome action set pieces. The campaign nails the feeling of Gears, and is just plain fun to play.

There are some questionable additions, though. Before the Swarm emerge, you’re fighting fleets of robots, which is a bit strange for Gears of War. The different bot types are interesting and their new weapons are creative, but it just doesn’t feel right.

Thankfully, the Swarm themselves are a great substitute for the Locust. Most of them fill in one of the roles left empty, so there’s a Swarm equivalent for the Wretches, Tickers, Boomers, etc. But there’s also new enemies like the Pouncer, not to mention some of new boss monsters. Not every new enemy is a home-run, but between the Swarm and the DB robots, there’s enough variety to keep fighting the AI fresh across Campaign and Horde mode. 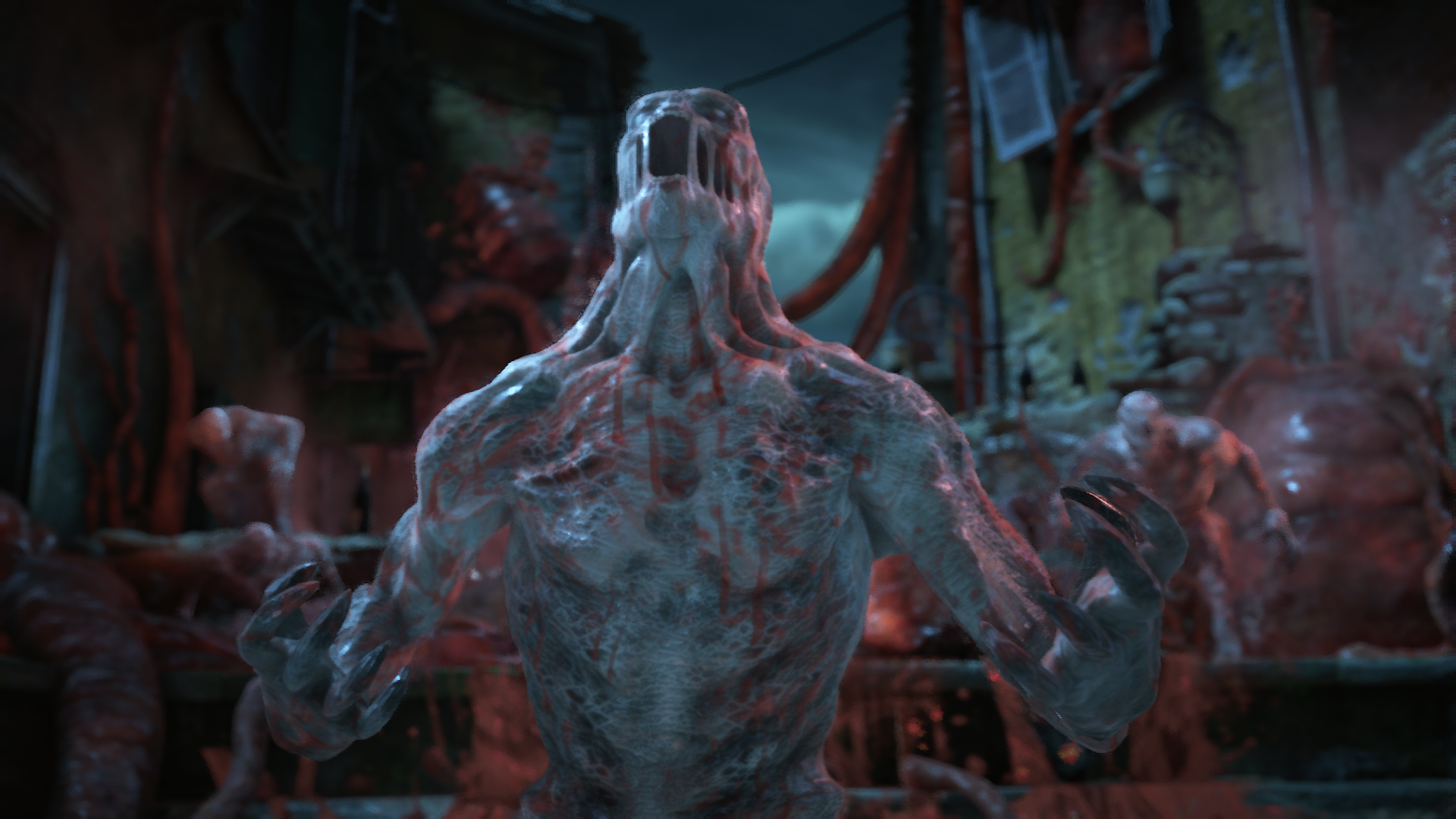 While the tone of “old-school Gears with a twist” is nearly perfect in the campaign, the multiplayer is also successful in this endeavor, although to a lesser extent. Versus undoubtedly brings the series back to its roots, but consequently it’s not a huge leap forward like the other numbered sequels.

Despite genre fatigue being a major issue in the beta, the full game offers longtime fans a little more diversity. New weapons like the EMBAR and the Enforcer bring some new ideas to the table, but the general framework of how multiplayer feels seems like it was ripped straight from Gears of War: Ultimate Edition.

The maps don’t help either, as their design stays a bit too close to the familiar and doesn’t take many risks. There’s not a single asymmetrical map at launch, and the general Gears of War map rules of “mid-tier pickups near the spawns” and “precision and explosive power weapons at the extremities of the map” are followed in all ten of the starter maps. This means that each of them pretty much play the exact same, which doesn’t help the game feel any fresher.

Some of the new game modes do offer some relief to the tired Gears formula that’s been followed to a T. Arms Race isn’t entirely original as it’s just a team-based Gun Game, but it’s a fun change of pace and offers a great way to get to know the new weapons when you’re first starting out. The standout of the new gametypes is Dodgeball, where every team member has one life, but earning a kill brings back a team member. Clutch moments on Gears of War are some of the most tense and exhilarating in modern multiplayer, so a game mode that is tailored around that idea is a genius addition. 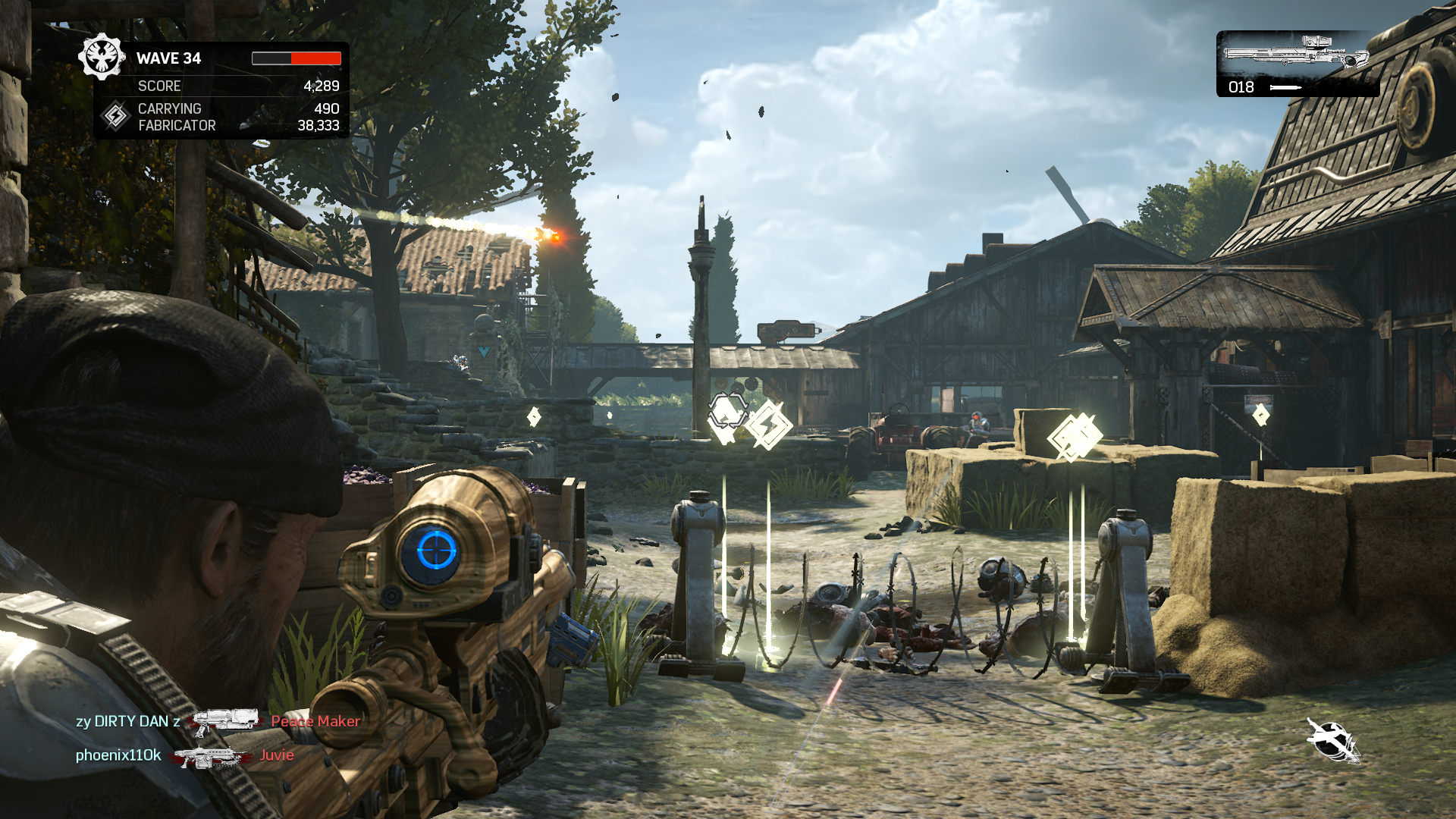 However, out of the three principles modes, the all-new Horde 3.0 is the highlight of Gears of War 4. Finally, Horde is a fully fleshed-out, complete mode where complex strategies and planning are actually viable and rewarded.

In the previous Gears games, Horde had never quite risen above the level of monotony; even in Gears 3, the unmovable fortifications meant that only a small number of strategies were viable at the higher levels, and reaching Wave 50 on Insane was practically impossible without utilizing some kind of exploit. But the new Horde is totally free-form, and any kind of batshit strategy is possible.

The most immediate change is that there are no preordained bases; teams can establish a hold-out spot anywhere on the map by deploying the “Fabricator”, which is the device used to purchase fortifications and weapons. Defenses can be set up anywhere regardless of where the Fabricator is located, so there are few restrictions on how much teams can strategize.

Another huge component of the new Horde are the classes. There’s the Sniper, Heavy, Scout, Engineer and Soldier, each with their own starting weapons and unique skills. Skills are attained through the game’s microtransaction-based card system, but depending on your class’s level, you can only equip a limited number of them. These skills can also be upgraded as you gain duplicate cards, which means that progression is a major aspect of the mode. Some classes are better at dealing damage while others can earn your team more money, so proper balance is essential for surviving at higher difficulties.

Having to consider all of these factors and variables when developing a strategy makes Horde mode more than just a mediocre grind of shooting wave after wave of monsters. It’s no longer a throw-away time sink to play in-between sessions of multiplayer, but a complete mode with its own progression system. It’s a totally new way to play Gears of War, and a big part of what rounds out Gears 4 such a complete package.

As a soft reboot for Microsoft’s powerhouse IPs, Gears of War 4 succeeds in its principle goals. It utilizes the best elements of the original classic, and throws in a few new ideas as well. Not everything is completely new and fresh, but it still offers a ton of content regardless of the type of player you are.

Gears 4 is hands-down the best exclusive on Xbox One right now. It’s self-aware and understands what people want out of a Gears of War game: schlocky, stupid fun.