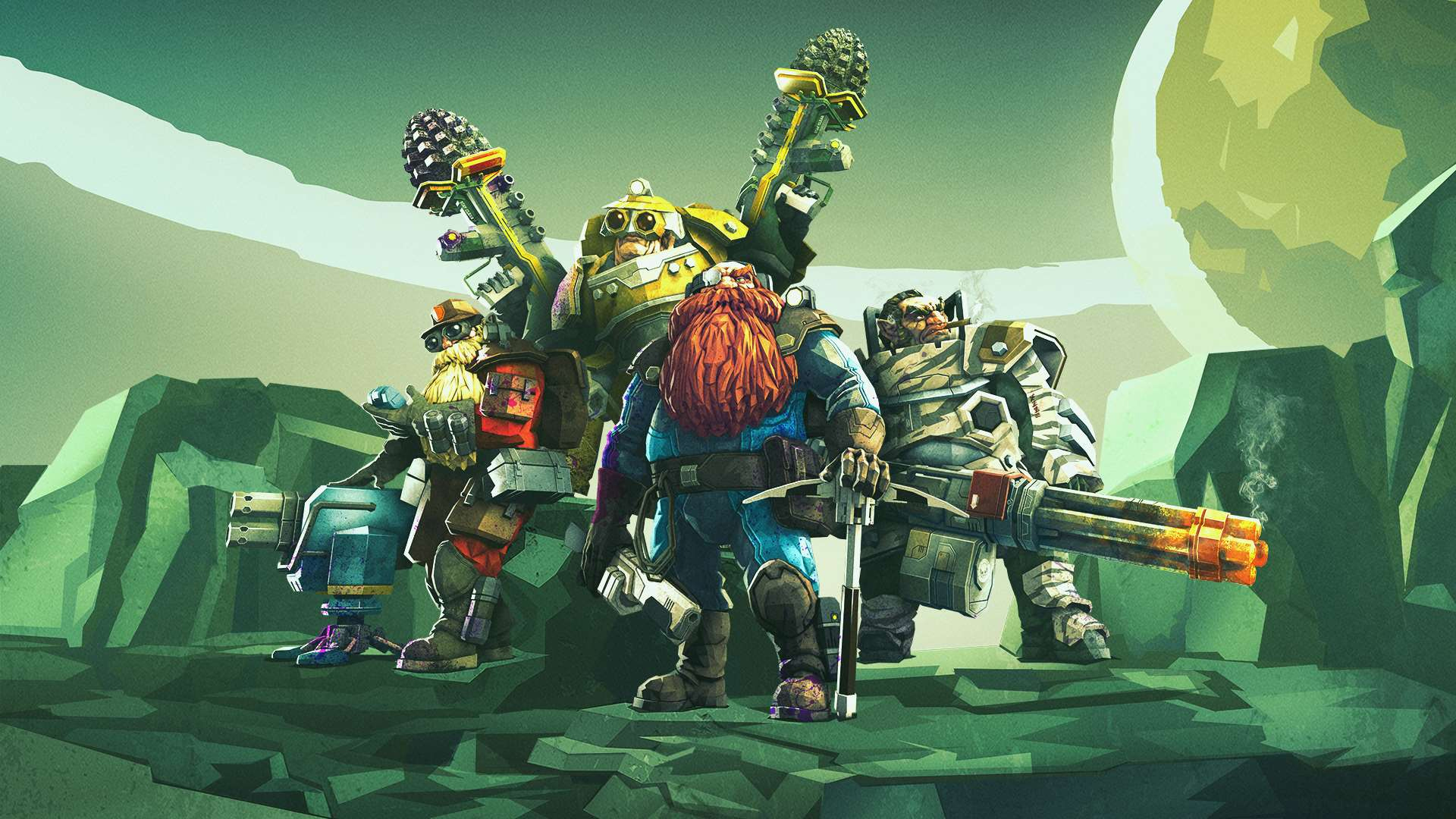 This Game Rocks, Get It?

To start, this game is on Steam Early Access and Xbox Game Preview, $24.99, which means its not perfect and is a work in progress, but let me tell you it has less glitches than PUBG.  Also, there is CROSS PLAY.

So what is Deep Rock Galactic? It’s a 4-player co-op shooter where you play as…Dwarves.  How else would you fit 4 guys into a cave, (queue thats what she said response).  The premise of this game is simple, pick a mission, drop pod into a planet’s cave, gather resources, escape. Before you start the mission you pick one of 4 unique classes each with their own special perks and weapons, and like any 4-player co-op game its best to bring 1 of each, these Dwarves are quite handy. The Scout can launch a grappling hook and well, scout out places.  The Gunner launches ziplines which the entire team can use, though it is fucking slow as hell.  The Engineer can creative platforms anywhere, just shoot and kabaam, platform.  The Driller can drill paths and blow up giant holes.  Leveling up is deep, opening up new and more powerful gear the more you play.

You may think okay, another Left 4 Dead clone, but thats where you are wrong.  As soon as the mission starts Deep Rock Galactic fucks your brain with atmosphere.  The caverns are tight, but deep, yes another butt hole joke. The clencher here is, everything is destructible.  Meaning you can forge your own path by constantly breaking rocks and burring holes.  The lighting is dynamic, its dark, but you have headlamps and can toss 3 flares (they burn out after a while), but they automatically recharge, so you’ll be tossing a lot of these.  Aliens are colorful yet stupid ugly, each cave is different in color.  The sound effects are great and the voice acting is hilarious at times.  All of this adds to a great feeling, like you’re actually mining as a fucking Dwarve in space.

Okay fuck you and your atmosphere, how do the missions play out you may ask, well you get a few objectives and thats it.  Every few hours missions are randomly generated, the higher level you become the more complex and challenging they are.  There is no hand holding, there is no go here arrows or map.  You need to figure this shit out yourself, this has been a trend with games lately, but thats a topic for another time.  Since there is no hand holding and the caves are dark and deep, you can easily get lost inside them.  Sucks right, well not so fast…

My first mission, I join a ongoing game, the other 3 dudes are already deep inside the cave.  I venture down and catch up to them, help mine for whatever rock we’re looking for, once we completed the objective we called in the drop pod to evacuate.  This is when all hell broke loose.  The drop pod gives you 5 minutes to go basically back to the starting point with all of the aliens attacking you full force.  So the 4 of us are fighting these ugly alien scumbags while trying to find the path back, harder than you think.  Out of nowhere a big alien bug charges me, I say fuck this and run the other way, taking the swarm with me and giving my new buddies a clear path.  Wrong move.  The aliens cornered me and killed/downed me.  I hear on the mic, we made it back with 3 minutes left.  Well fuck you buddy I didn’t.  The dilemma here was, if you leave one behind you get less loot. They debated for about 20 seconds, do we save this newb or just leave.  Finally one guy said fuck it, I will save him!!!  He asks me “where are you”  I go “deep inside a rock” FAN FUCKING TASTIC.  The time was going down fast, now it was about 1 minute 20 seconds left.  I see him, he starts fighting the rest of the aliens I couldn’t kill making his way towards me.  Reviving me like a hero, but now there were 45 seconds left, can we make it back in time?  Thankfully this guy knew the way he came, no homo.  We run as fast as we can, I’m trying to stay on his ass like peanut butter, nothing can shake me off.  20 seconds left, we see the drop pod and a swarm of aliens around it.  We jump over the aliens and into the pod with 10 seconds left.  MISSION COMPLETE.

That experience right there is what sold me.  No anger like in PUBG after I get killed, no glitch that ruined my first match.  Just an honest fun filled match.