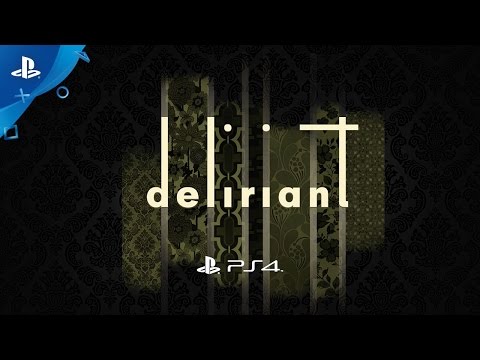 An empty house, a microwaved baby figurine, ominous photos upstairs. These seemingly random items strewn about a home tell a story for someone to piece together in Deliriant, a student project that was self-published onto the PS4 under the company of Manic Interactive. Without any context or warning, the player is in a white realm of practical nothingness until the player turns and sees a nonchalant brown door. Once gone through the door, the player finds themselves in the aforementioned home. The player can then interact with objects that are seemingly just thrown around, and explore the home and its’ second floor. Welcome to your new 70’s home. Welcome to Deliriant.

Like the games that inspired it such as Gone Home, Journey, and the acclaimed classic Myst, Deliriant is quite simply a very slow walking simulator. You examine objects slowly, you walk slowly and one can only assume that the purpose of the player moving like a snail would be to forcing the player into examining every piece of evidence of the mysterious crime that may have been committed in this 70’s oriented home. The interesting elements the objects play as they quite literally manipulate your surroundings is that they unsettle the player. Not enough for panic, yet not lacking enough for comfort either. It’s a slow progression of the classic, “Something is wrong here”.

However, even with its’ slow pace and its’ manipulative objects, Deliriant feels like nothing more than a mild LSD trip to the player. Without proper context, we feel as if we are strangers in the home, observing an abandoned home that wishes to tell a story yet is prevented by the fact that there is no sense of people having been in the home, there are no writings like in Gone Home, there is no other person like in Journey, there are no mysterious beings like in Myst. Deliriant has you totally alone.

At the end of it all, after exploring and interacting, the player can enter a hole in the wall into a black space and down an assembled stairway to another door. The interesting part about this is that if the player chooses to look around, they can see other stairways and other doors. Insinuating that there is a definite cycle of something occurring within Deliriant. 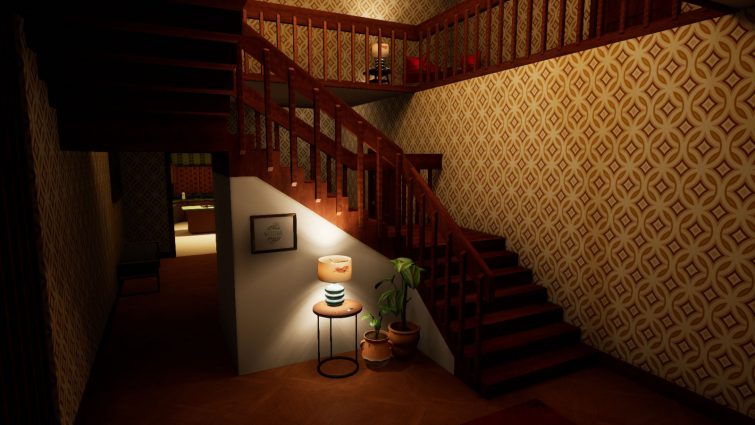 Time to Move Out

The most interesting part about Deliriant is surprisingly the trophies that the player can earn by interacting with certain objects and it is the trophies in which the player can most safely piece together the vague story within Deliriant. Just by walking through the door in the beginning, the player earns the trophy named, “New Beginnings” in which the description is “starting fresh”, this insinuates that whatever family lived here had moved from another place perhaps for a second chance. Perfectly normal, however, it gets dark when you enter the father’s workspace and earn the trophy “Work hard, play hard” in which the description is, “interrupted private time”. The workspace is one of the most unsettling rooms in the small game, there are ominous photos on the floor of a grave, a family, and some other things hard to see. The trophy is specifically earned when the player focuses on the safe in the workspace, which the player can never open, adding a bit of both frustration and mystery to the overall game.

My final thoughts on Deliriant is that it’s a nice intro for a company made up of only 12 students from the University of Utah. It shows care and funnily enough a lack of skill in storytelling from the students. The mysterious elements somewhat frustrated me as I could not one hundred percent assemble a coherent story in the game, only snippets of a possibly abusive father, and a very angry son or a teenage daughter wanting to grow up too fast. Perhaps I am too idiotic for this game but nonetheless, Deliriant is an interesting cheap little game, it’s not bad, but it’s not great either. I suggest that one would only buy this game if you have 99 cents and you don’t feel like getting something cheap for dinner from McDonald’s.