“Antiquated”. It’s the first word that comes to my mind when I think of the original Dead Rising. In many areas, the gameplay design is hardly thought through, the AI pathfinding (which incidentally is critical to the game’s core mechanic of saving survivors) is abysmal, and the delivery of some of the dialogue is genuinely laughable.

And yet, it’s among the most memorable zombie games ever made in a genre that’s inundated with cookie-cutter diarrhea. Despite objectively failing as a well-functioning game, there’s so many endearing things to appreciate that it’s hard not to love. Dead Rising asks you to play around in its disturbing, comical and satirical world, and by the end fills you with a satisfying appreciation for the hellish journey you’ve just been through. There aren’t many games that can elicit real anxiety in players like Dead Rising does, and it’s what makes it such a significant piece of the horror genre.

In Dead Rising, Frank West is a freelance photojournalist who gets a tip of a major news scoop happening in the town of Willamette, Colorado. He takes a helicopter to a shopping mall at the epicenter of a military quarantine, and discovers the disaster is the cause of something seemingly supernatural: zombies. Frank works to uncover the truth of what’s really going on in Willamette, before his helicopter comes back in 72 hours to pick up him and any other survivors he rescues.

The plot feels like a schlocky zombie movie in the best possible way; there are just the right amount of unintentionally funny scenes to give off a dark comedy vibe, and the pacing and atmosphere the game establishes makes it feel like an authentic horror film from the 70’s. There’s also a strong emphasis on social satire, which is another staple of classic zombie flicks like Dawn of the Dead, which Dead Rising is loosely based on.

The social commentary is subtle, which is something that became lost on future installments of the series. The main story, along with practically every psychopath boss, critiques American culture in some way. It’s nothing that hasn’t already been said a hundred times, but wrapping so much subtext into one videogame is an achievement in a medium that traditionally deals with one-dimensional storytelling. 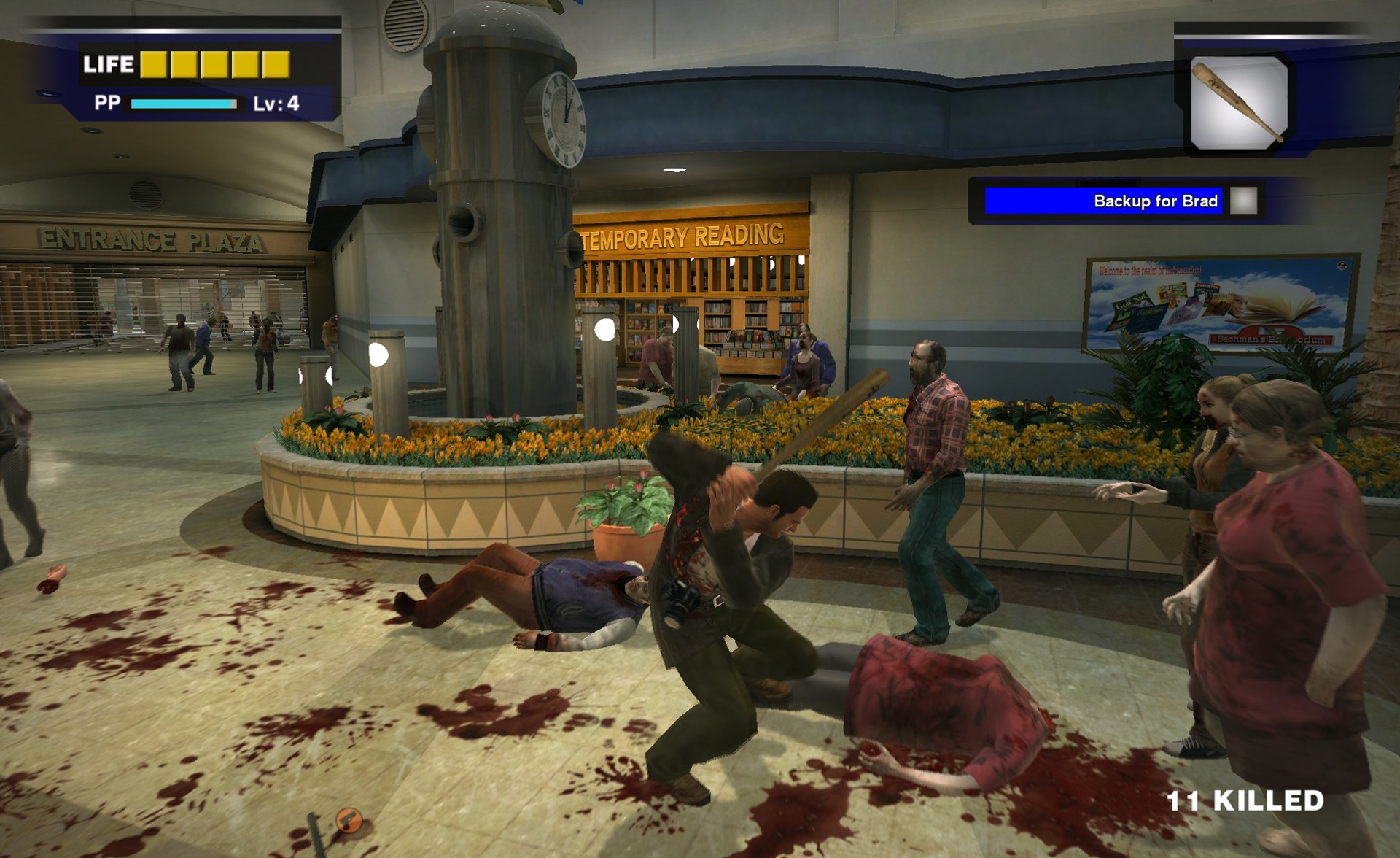 Every mission in Dead Rising revolves around its time mechanic; Frank only has 72 hours to get his scoop, and there’s an accelerated in-game clock which every mission is structured around. If you don’t reach an event before a certain time, it’ll disappear for the rest of the game. This means that time management is absolutely essential, and juggling between saving survivors and continuing the story creates a tension that can result in having to sacrifice the lives of survivors to make it to a case on time.

The anxiety of time management is compounded by the game’s (seemingly) intentionally brutal save system. There are no autosaves; if you die or miss a case, you can easily lose an hour or two’s worth of progress if you forget to save.  Being in a bad position is genuinely terrifying, as death usually means losing a large chunk of what you’ve done. It puts a value on life that just doesn’t exist in games that give out checkpoints every 30 seconds, and that fear of death creates an atmosphere of dread that most horror games don’t accomplish.

Besides just completing story missions, Frank has other scoops he has to take care of as well. Most of them involve saving other survivors, but he might also have to head back to the safe room to keep the peace amongst the people he’s already saved, or take on one of the game’s infamous psychopath boss fights. Notoriously, the bulk of these side missions are unnecessarily difficult due to the game’s poor design.

“Frustrating” doesn’t even begin to describe the process of escorting survivors; the AI pathfinding doesn’t account for concentrations of zombies or obstacles placed in the way of the computer’s designated path, so the people you’re trying to protect often run right into a crowd of zombies or get stuck on an object that you have to move out of the way. Giving them weapons is usually more trouble than it’s worth, because they can hurt you and the other survivors in your party. Giving the computer a shotgun is a disaster, because if they don’t end up killing the other members of your group, the damage you accidentally deal them as you try to free them from a pack of zombies will certainly do them in.

The psychopath battles also feel like they were rushed. The skill moves and weapons that were designed to be effective against zombies are what the game expects you to use against the human bosses, which means defeating them pretty much comes down to your ability to exploit the AI. It could be said that these encounters are that much scarier because they’re so random and difficult, but I doubt this was Capcom’s intention. Now the stories behind these psychopaths as well as their over-the-top deaths make them memorable, but the fights themselves are frustrating tests of patience.

But in spite of such major flaws, this particular blend of hammy storytelling, anxiety-driven mission structure and shitty game design add up to a game which by the end makes you feel like you’ve gone through a journey. Frank’s expression in the final scene of the game epitomizes what the player is feeling by the finale: tired, worn, and broken. When the credits finally roll, it feels earned because of all the stress the player just had to go through to get to that point. It’s a feeling that not many games are able to accomplish, but it’s what makes Dead Rising so special for those who’ve completed it.

What makes videogames unique as a medium is that their participatory nature has the power to bring out a greater degree of emotion than something passive like a film or a book. While most games don’t achieve this, the few that do are infinitely more memorable, even if they’re not as well-made. Dead Rising is one of those games that elicits a genuine emotional response from the player, and is why in spite of its glaring flaws it stands out in the sea of zombie shovelware.

At a surface level, the first Dead Rising is an entertaining zombie playground that’s fun to screw around in. But dig a little deeper and you’ll find one of most authentically terrifying games in recent memory.