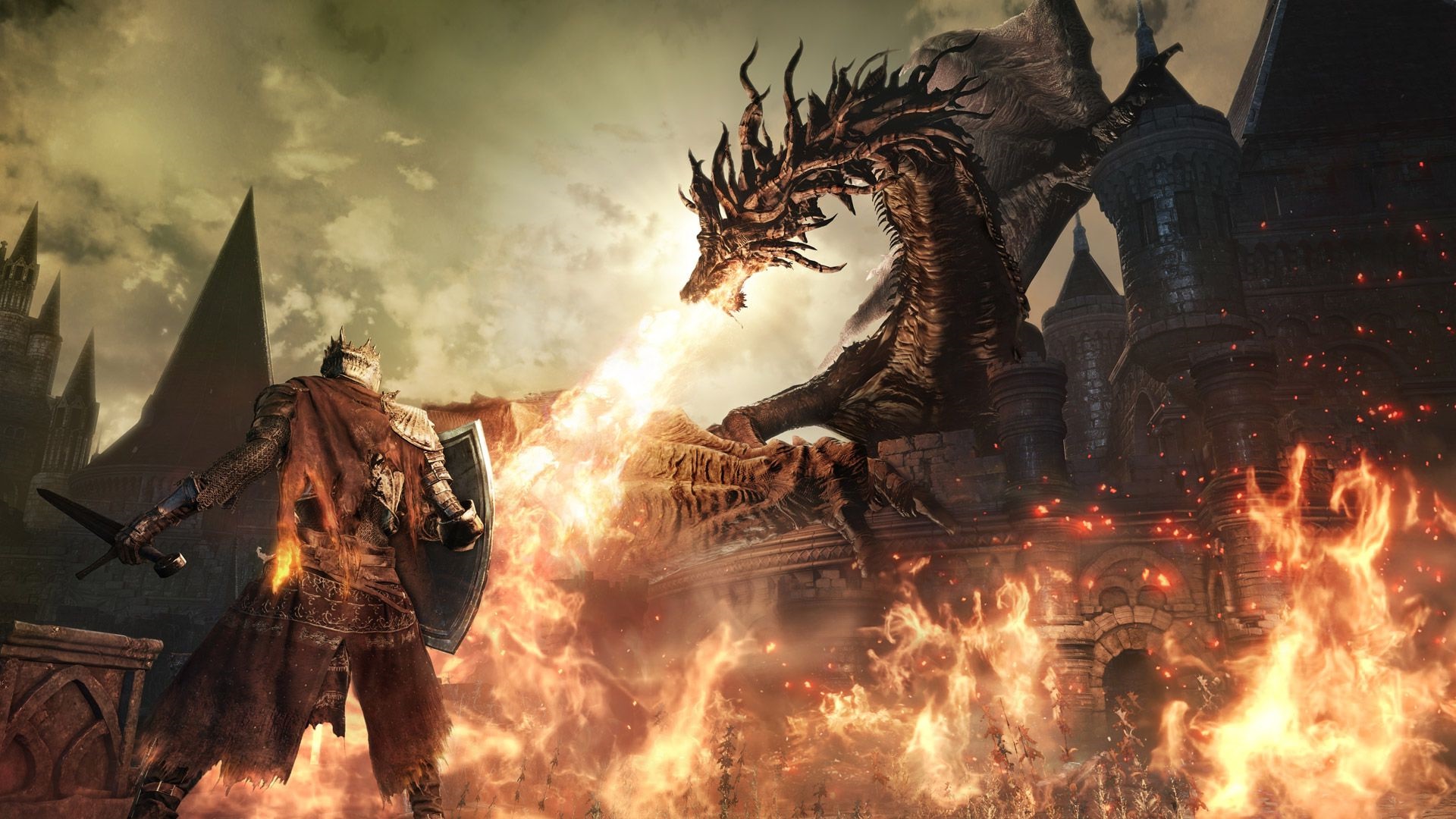 A Fantastic Conclusion to an Amazing Series

The world is dying, being consumed by the Abyss. The Fire is fading once again, and the stakes are higher than ever. Will you allow the world to continue in an age of perilous glory? Will you let it die so that, amidst the terror of the cold unforgiving darkness, maybe a new fire may come again? This is the setup for Dark Souls III, the third and final entry into the beloved Souls franchise. After the disappointment that some fans felt with Dark Souls II, it seemed things are back on track now that Miyazaki himself took control. And for what it’s worth, his involvement shows. This has allowed a level of polish that was used to great effect in Bloodborne, but has now settled within the grandeur of the Dark Souls series. All while taking the best elements of the previous entries. This ends up producing what is ultimately a grand story with great fanservice all at once, while somehow maintaining an identity of its own.

The story takes place in Lothric, another kingdom set during the Age of Fire from the previous Dark Souls. The First Flame has begun to die out, signaling the end of the Age of Fire and the beginning of the Age of Dark. Due to this, the undead curse has corrupted the land once again. All but one of the Lords of Cinder – those who were intended to link the First Flame to prolong the Age of Fire – have selfishly abandoned their post, leaving nobody to allow the linking of the Flame to happen. Due to this disaster, an undead is chosen as the Ashen One: the one who goes out to restore the Lords of Cinder back onto their thrones and finally end the vicious cycle of fire and darkness, while simultaneously destroying the curse of the undead.

Like with all of the previous entries in the series, the story is about as vague and mysterious as you can get. There are hints at greater things happening, as well as making you question whether or not anything that takes place is even happening in the modern timeline (as is the case with previous titles). Piecing everything together means reading the flavor text of every single item and checking over the architecture and dialogue presented within the game proper. From Software likes to believe everyone is capable of doing things for themselves, and this is no different. To talk about anything more would be to delve into the realm of spoilers and theories, and that’s not what my reviews are for. The only thing that might be a bit off-putting is the constant referencing to previous entries in the series, most specifically with the original Dark Souls. While it makes sense within the world of the game, and is even supported by what previous titles have suggested, it can feel as though there’s not enough of an identity to this game, being simply a “greatest hits” album of all that made the previous games so great instead of being something unique. That being said, I believe it’s the logical conclusion of the lore of previous games, set in a new world.

If being a greatest hits album involves the usage of amazing environments and astounding sights, then I’m all for it. Lothric is a vast and beautiful landscape, dotted with some of the most memorable areas in any game. From the snowy cathedral in Irithyll, the buried desert world of the Profaned Capital, and the forests and bogs that fill the Road of Sacrifices leading to Farron Keep, there is not a single level that doesn’t make you want to sit back and enjoy the view. Combine the graphical quality of Bloodborne, where every little item is detailed with care and commitment, then you have one of the best looking games on any system. The only thing that holds it back are the occasional framerate drops when things get a bit intense. However, they’re not nearly as bad or as frequent this time around, suggesting From may have learned how to maintain a solid gameplay experience.

The lands of Lothric are just as maze-like and expansive as those of Lordran, though without as many pitfalls as before (thank God, or rather Praise the Sun). Each level has may different paths to follow, leading to all sorts of areas that hide loot, hidden shortcuts back to the safety of the last bonfire, and even new enemies for you to attempt to get through before getting stabbed or eaten or whatever else happens to kill you. Everything twists and turns back in on itself, and you can find yourself getting easily lost once again, both to your excitement or dread, depending on where you ended up. The biggest shame is that the overall progression is linear, instead of everything looping around and coming back to previous areas in numerous “aha!” type scenarios like in previous entries. It’s  the individual zones that contain this maze-like structure, which is the biggest saving grace of the design, given that each area is a bigger one that anything in previous games.

As always, the gameplay of Dark Souls is what immerses so many people into these games. As with previous titles, this is an action RPG, but one where the actual combat is methodical and defensive instead of offensive. Every swing of your weapon drains your stamina, as does every dodge and block. Magic is also a factor, only this time there’s a meter for magic attacks instead of limited single uses like in previous titles, allowing you to use more of your magic at any given time instead of conserving ammunition, aided by the addition of an ashen estus flask that refills your “focus” meter much like normal ones restore your health. But the focus meter doesn’t just aid in magical spells. For melee oriented builds, you can use focus to enable a much stronger attack with your weapon, ranging from wide-reaching spin attacks to shield charges to brutal lunges. These add a new dimension to the combat, as using these moves is risky, but necessary against some of the tougher enemies of the game.

Ah yes, that ever-famous Dark Souls difficulty. Well, I’ll put it this way: nothing has changed in that department. Even the most pitiful of trash mobs can wipe you out if you’re not paying careful attention to both your surroundings and their attack patterns, which seem more erratic and deadly than ever before. This is because they’ve not just taken influence from the dozens of warriors and monstrosities of the previous Dark Souls titles, but also from the more aggressive and bestial nature of Bloodborne. Bosses even do the same, as they now have different phases during their fights that often change how they behave. This brings an unpredictability to fights that’s much appreciated, especially considering that most players are keen observers of these games at this point. It forces you to get used to the more mobile action of Dark Souls III without shoving it in your face.

When things get too difficult, however, you can always rely on cooperators to aid you in your journey. By utilizing summoning signs on the ground, you can summon phantoms (player characters) to help you get through some of the trickier areas. You can do the same for others as well, provided you meet the requirements. As always, covenants can allow you different opportunities to give help to others, with the barrier to entry for each covenant finally being toned down so that others can revel in jolly cooperation more easily. However, with that said, invaders are still a thing, and can provide another challenge for players willing to risk the chance to meet a hostile player and battle one-on-one (or one-on-three, if you’re savvy). Defeating a host as an invader grants you souls, and vice versa. One covenant allows you to become a new type of online player called a mad phantom, which allows you to not only assist players, but also to try and defeat them, in sort of a “I go my own path” kind of way. To be honest, while the idea is sound, more often than not it’s just used as another type of hostile invasion, which makes the whole system feel redundant and unnecessary.

Of course, you will need to level up to use some of the more impressive weapons that this game provides in order to conquer your challenges, which is where the leveling system comes in. You gain souls by defeating enemies and using certain items, which  you use to upgrade a set of stats that affect your character in a variety of ways. These boosts can increase your health, mana, and stamina. One can build up your strength and dexterity to wield different weapons more effectively, and you can even increase your intelligence and faith in order to use more magically attuned items. Not only this, but your souls are also a type of currency for vendors, who sell a variety of consumable items (which now scale to stats), magical spells, and even more weapons and armor that you don’t normally find by exploring the main game areas. You  can upgrade weapons via specific items known as titantite shards, chunks, etc., as well as being able to be infused with gems to give them different elemental or stat attributes. However, these don’t affect weapons as dramatically as in Dark Souls II. In fact, they can almost be ignored, with a few exceptions like heavy or refined gems. The elemental attribute gems are virtually worthless as well, considering that certain weapons you find have elemental damage already utilized that have a better damage output overall.

Aside from those disappointments, the rest of the game fairs much better. The sound design is top-notch as always. Every clank of metal, every footstep, every unsettling sound you hear as you travel through dark areas leaves you right in the moment each and every time. The voice acting is as good as ever, with that uncanny quality that makes Dark Souls so unique and memorable. The soundtrack is just as amazing. While you hear no music throughout the main areas barring a few special examples, the boss themes are as grandiose and epic as ever, with a hint of agony thrown in to symbolize the inevitable end of the world. It’s a feast for the ears the entire time.

In many ways, Dark Souls III is about the end of everything. Within the game’s context, the end of the Age of Fire is coming, no matter what you do. Within the real world, this is the end of an era; the end of a fantastic series that defied expectations and became legendary by doing what it wanted instead of what design trends recommended. It was difficult and relentless while at the same time being fair on any player willing to learn its rules and pay attention to the game  as a whole. It had a story that required a dedicated fanbase to read into and unlock its numerous secrets. Numerous developers attempted similar design choices in their own games, to varying degrees of success. It became larger than itself, and there’s a positive and negative to that. Either way, From Software created something magical with every game in the series. If Dark Souls III is any indicator, they’re leaving it all on as high a note as they could.