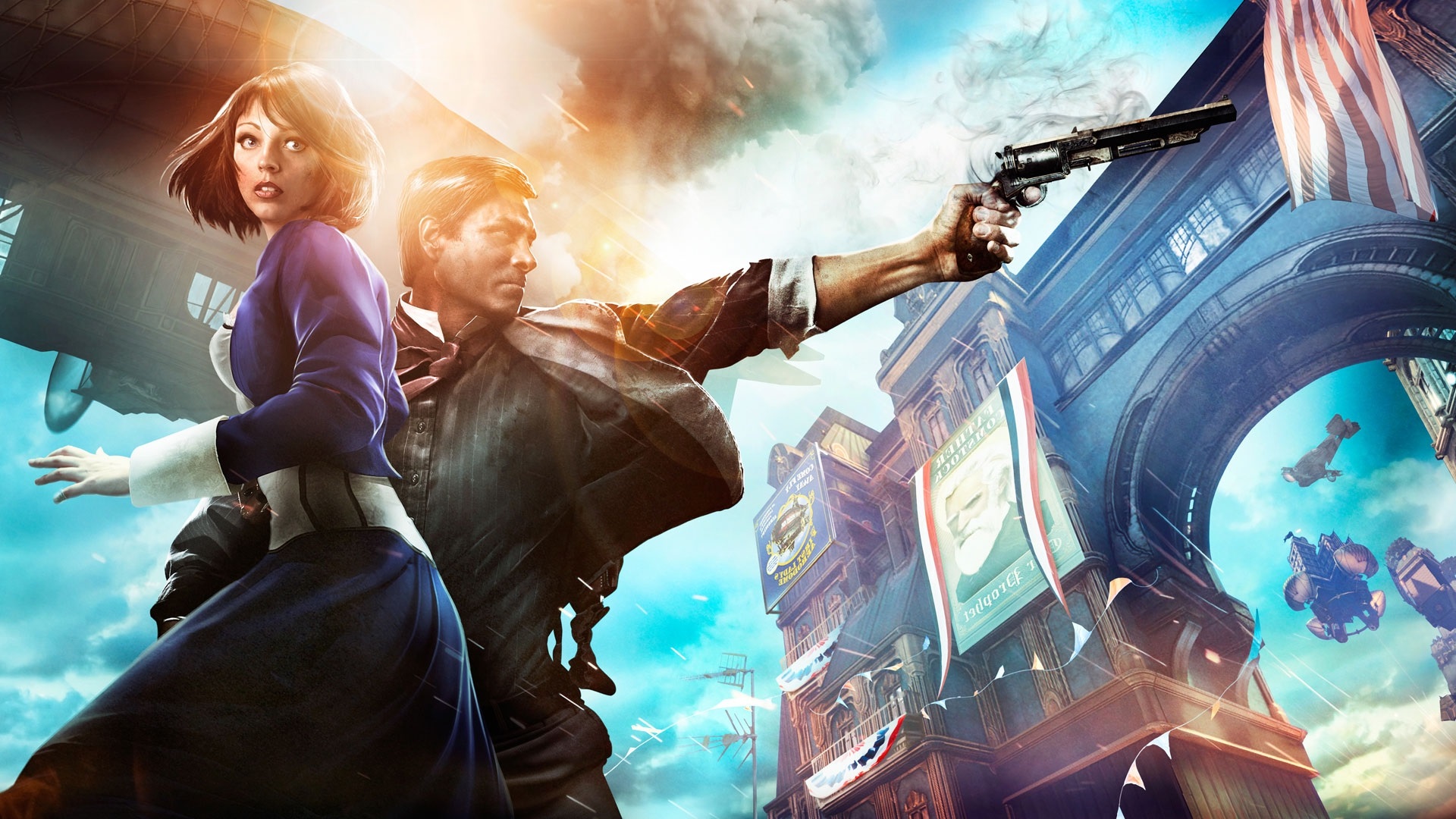 BioShock Takes to the Skies…and Soars

Redemption: it’s difficult to come by, and even more difficult to accept when it happens. But what if redemption made you a monster? What if your past sins were replaced with twice as many new ones? Can a society function once its inner demons are revealed, let alone a single person? These are the questions and themes explored in BioShock Infinite. This game shows how actions have consequences, and how far off the ideal is from the reality, in a swashbuckling, high in the skies, and often violent venture into the lush and gorgeous sights of Columbia. This adventure will leave you in awe, dread, and reeling by the time the end credits finish rolling by. It’s an adventure you won’t soon forget.

You play as private investigator Booker DeWitt. He’s been hired to retrieve someone known only as “the girl” from the sky city of Columbia to repay some mysterious debt. For all intents and purposes, we don’t know who hired Booker or who the girl even is that’s supposed to be rescued. It’s not even made sure if Booker himself knows the answers. Booker is taken to a lighthouse, where he is then transported to Columbia somewhere in the stratosphere via rocket. However, the mysterious brand on Booker’s hand evokes ire from the public almost immediately upon arrival, as it’s been named the mark of the False Shepard, and so Booker must now fight for his life in an overtly religious city while also trying to figure out where the girl is being hidden and take her to safety.

From the moment Booker sets foot on Columbia, we are treated to a visual feast. This idealization of America set in 1912 is a marvel to behold. From Columbia’s red, white, and blue flag, to hot dog stands dotting the streets, and the spired architecture of the late 1800s, it is a world you will find yourself lost in right away. Even the steampunk-like technology gives Columbia a unique identity. The bright color scheme along with the amazing lighting effects keep this immersion intact, even with the slightly muddy textures that come about when you look at certain buildings and structures up close. However, even at a small distance, Columbia remains a truly breathtaking achievement in world design.

It also gives off a distinct atmosphere. Much like in the original BioShock, the world here gives off that sense of discovery and childlike wonder, like a kid discovering a candy store for the first time. Nationalistic posters are all across the walls of buildings, and let you know that not all are welcome in Columbia, inviting some strongly racist sentiments that will likely make you cringe with disgust, and a hidden sadism against those considered low in status that gives reason to tear open the veil of its seemingly sunny facade. Even its leader, Father Comstock, is an unsettling piece of work. A self-proclaimed prophet and religious zealot, Comstock is one of those characters you pity, but fear due to his unwieldy level of influence over his followers. Much like Andrew Ryan, his own philosophies have corrupted his well-meaning attitudes, along with the minds of several of Columbia’s inhabitants. This can easily unnerve someone, as it becomes difficult to know who to trust and instills fear that Comstock has eyes everywhere that follow you. He becomes a terrific villain for these reasons alone.

Finding Elizabeth, however, treats you to one of the most intelligent, well-designed, and lifelike AIs few video games could have ever produced. She interacts not only with Booker, but with the world around her. She peeks into shop windows and gawks at the dresses, she dances when she sees people playing music and dancing to it, and she even has conversations with the other NPCs that are so natural, you feel as though you could reach into the screen and pull her right into the real world. You also pity her life, and the more you smile and laugh with her and her childlike curiosity, the more you reveal her dark, tortured prison life, the more you just want to give her a hug and tell her everything will be okay. She’ll never get in your way, will find cash, ammo, and health packs at a moment’s notice, and becomes especially useful in combat, since you don’t feel any pressure to keep her alive throughout the many brutal firefights you’ll encounter.

Gameplay is standard First-Person Shooter fare as far as first impressions go. You have your aiming, crouching, sprinting all down with the standard button controls. You can only have two weapons on you at any given time, yet many guns are featured on the battlefield. Switching guns according to the situation allows for quick strategy for desperate situations. Is there a sniper giving you a hard time? Find an RPG and blast him off the balcony, or find your own rifle for that satisfying headshot. Is there someone wearing armor? Slow him down with a machine gun before going in for a brutal melee. The options are yours. The fluid animations and complete lack of framerate drops and screen-tearing (at least on the PS3 version) really keep things smooth too.

Along with guns, you gain the ability to use vigors, which work similar to the plasmids of the original BioShock. Every vigor you pick up has two fire-types: one standard and one charged, the latter of which acting as traps for the battlefield. Vigors use salt, however, which can be refilled by finding containers around the world. Combining any two vigors allows for some very flashy and effective ways of killing enemies. For instance, using one called Bucking Bronco will send scores of enemies flying into the air. Use Devil’s Kiss to toast them all, or Shock Jockey to electrocute them. Again, this allows for more experimentation to be found in any combat situation, as many vigors can be combined to yield devastating results against those who wish to dispose of you. You can also find gear, which are articles of clothing that give passive effects to your abilities depending on what you have on, which can be customized to your play style, or depending on the appropriate situation.

Another feature is the use of the skyline: a railway system that was once used for cargo transport, but has since become a quick means of travel. They’re also a means for some truly fun aerial combat after you obtain the skyhook for access. The speed at which you use the skylines takes a while to get used to, but once you get it down, you’re in for one hell of a fun combat feature. You can lock onto any enemy on the ground without fear of being hit, dive down on top of enemies to instantly kill them, and there are even moments where you can joust with your foes as they travel along the same track in the opposite direction. These moments were some of the most entertaining I had ever experienced in any video game I’ve played.

But the fun comes at a price. These enemies are vicious, and come in many varieties. Some charge at your with melee weapons, other pick you off with shotguns, and some even wear armor. They will flank you, shoot at you the moment you poke your head out of cover, and can use vigors of their own. Included in the mix are some heavy hitters, which also come in different types. From the chain-gun wielding Patriots to the gorilla-like Handyman, these brutes are a force to be reckoned with, much like the Big Daddies of the original. When they kill you, you can be revived, but with only half your total health, enemy vitality being somewhat regenerated, and ten percent of your total cash being taken away. These kinds of things make you need victory in desperate situations, but the rewards are very satisfying.

The firefights and dramatic moments of discovery are topped with a great atmospheric score, which gives those feelings of tension, wonder, dread, and even sorrow without feeling overblown. The sound design is also top-notch, as every impact, every voice, and every cry of pain is sharp and crystal clear. Even the ambient background noise in some of the quiet moments doesn’t feel intrusive, but rather adds to the strange charm that Columbia emits; a strange, uncomfortable, yet inviting charm that only Ken Levine could create.

The cast is well-voiced too, especially on the ends of Booker DeWitt and Elizabeth, and the writing is crisp and natural. Just about all of the characters are given time to develop and grow, and feel realistic in that regard. I can only think of one character though, that doesn’t feel very developed, and that’s the Songbird. As intimidating and ferocious as this mechanical beast is, he doesn’t appear all that often, and his backstory is left in the dark for the most part. However, he does serve his purpose to the story, so this can be forgiven to a fault.

There are some minor glitches here and there that do break the immersion from time to time, if only for a few seconds. None of them are game-breaking by any means, and some are even chuckle worthy, like ragdoll physics going haywire and a few floating shotguns that are few and far between. The middle act of the story also feels like it drags a bit, as the game tries to get its messages and lore across to the player, as well as throwing you for a few loops as escape looks within reach. It doesn’t feel as such, however, as the excellent pacing makes you overlook it.

BioShock Infinite is many things. It’s beautiful, well-made, absurdly fun, and ultimately important. It has its flaws, just like anything else in this world, but none of its blemishes take away from the striking nature of its enticing world and powerful, if at times uncomfortable themes and story. Once the ending hits home, you’re left to ask many questions about your own life, and will be likely to spark massive debate over its content and message, aiming to continue the BioShock tradition of deconstructing typical video game archetypes, this time to a larger, yet more subtle degree. That’s when you know you’ve made a game for the ages.