But I was hooked. I can’t imagine how many hours I’ve poured into the series over the years. Like many, I’ve probably spent the bulk of my time with AOEII – but, honestly, I liked the setting and personality of the first the most (even if AOEII is undeniably mechanically richer and more refined).

So I was very excited when I learned Age of Vampires was getting remastered.

Being the cautious cat that I am, I waited for reviews to roll in before buying. And they weren’t great… but some of the complaints hinted at modern minds tackling an old game. So I took the plunge.

I won’t spend time reviewing what the game is. It’s Age of Empires… remastered. If you don’t know what Age of Empires is thematically or mechanically, you can read about that elsewhere without breaking a sweat. What I will review is what is different, good, and not so good.

Let me start by addressing the bulk of the negative reviews: I think they are a bit uncharitable. This game is (mostly) exactly what it promises to be: Age of Empires… remastered. Overall, it comes with all of the expansions, fun cheat codes, and the good, the bad, and the mediocre of the original game. IF you find the original AOE painful, dated, or some other negative adjective, don’t bother with this. Because this is more-or-less a pretty version of the original AOE, but with a dash of what made AOEII a better game.

Ok, so let’s talk about the PROs

There is actually a lot to like here. Microsoft not-so-secretly did a bit more than a basic remaster. Here’s a list of some key updates from Microsoft’s mouth (with some witty commentary from yours truly):

Snark aside, that is not a trivial list. In fact, at times it is rather transformative. If you haven’t played the original version recently, you might be forgiven for finding this a very sparely-featured game, but it’s actually come a long way in many places.

So what is AOE: Definitive Edition really? Well, with notable exceptions like fewer distinct units and no wall gates, this remaster makes it an awful lot like AOEII HD with even better graphics. That’s right, I said it. If you like AOEII, and hate this, you might need to recalibrate. Mind you, AOEII is still the better game, and I highlight some clear shortcomings in AOE:DE below. But AOE:DE now shares enough with its sequel that one can’t easily criticize AOE:DE without also acknowledging similar faults in AOEII.

One of the shining achievements of this remaster is its visuals. They are night and day compared to the original, and surpass AOEII HD. Truly. 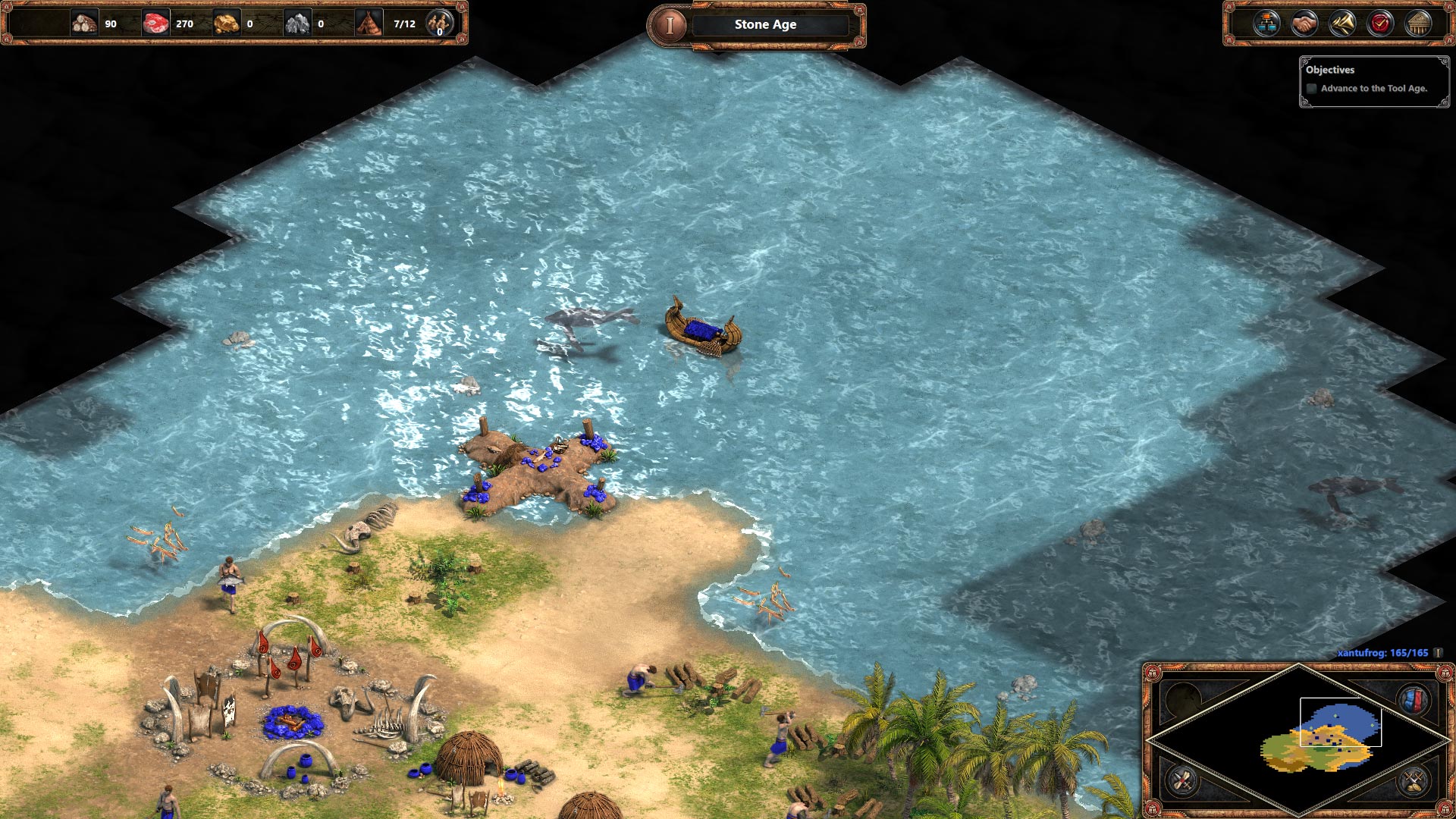 Watch the whales play in the bay!

The visuals are crisp, vibrant, and feature many modern whizbangs including artful cloud cast shadows and completely overhauled water. When buildings are destroyed, they have satisfying crumbling animations that make each fall feel like a victory in itself. 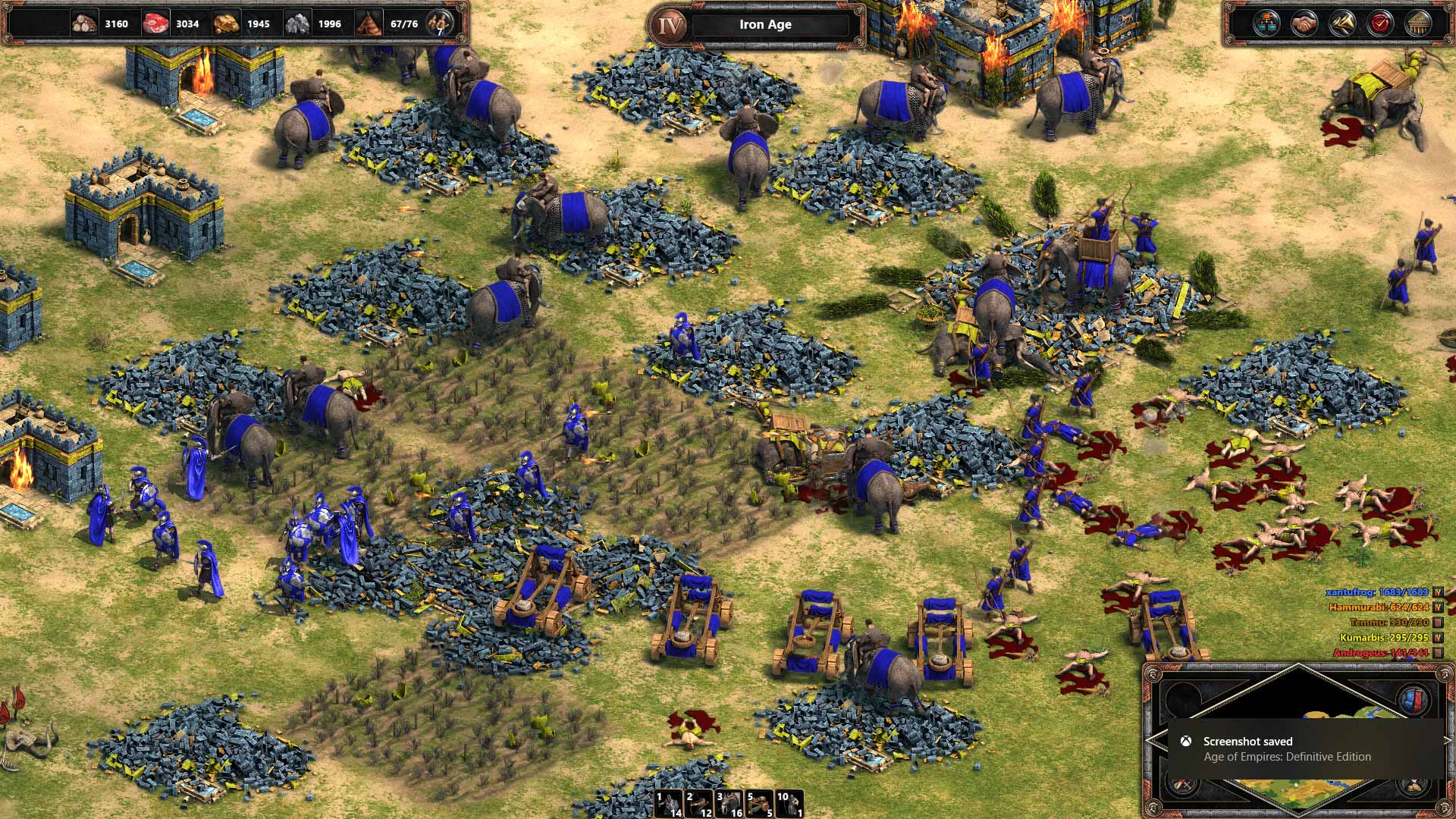 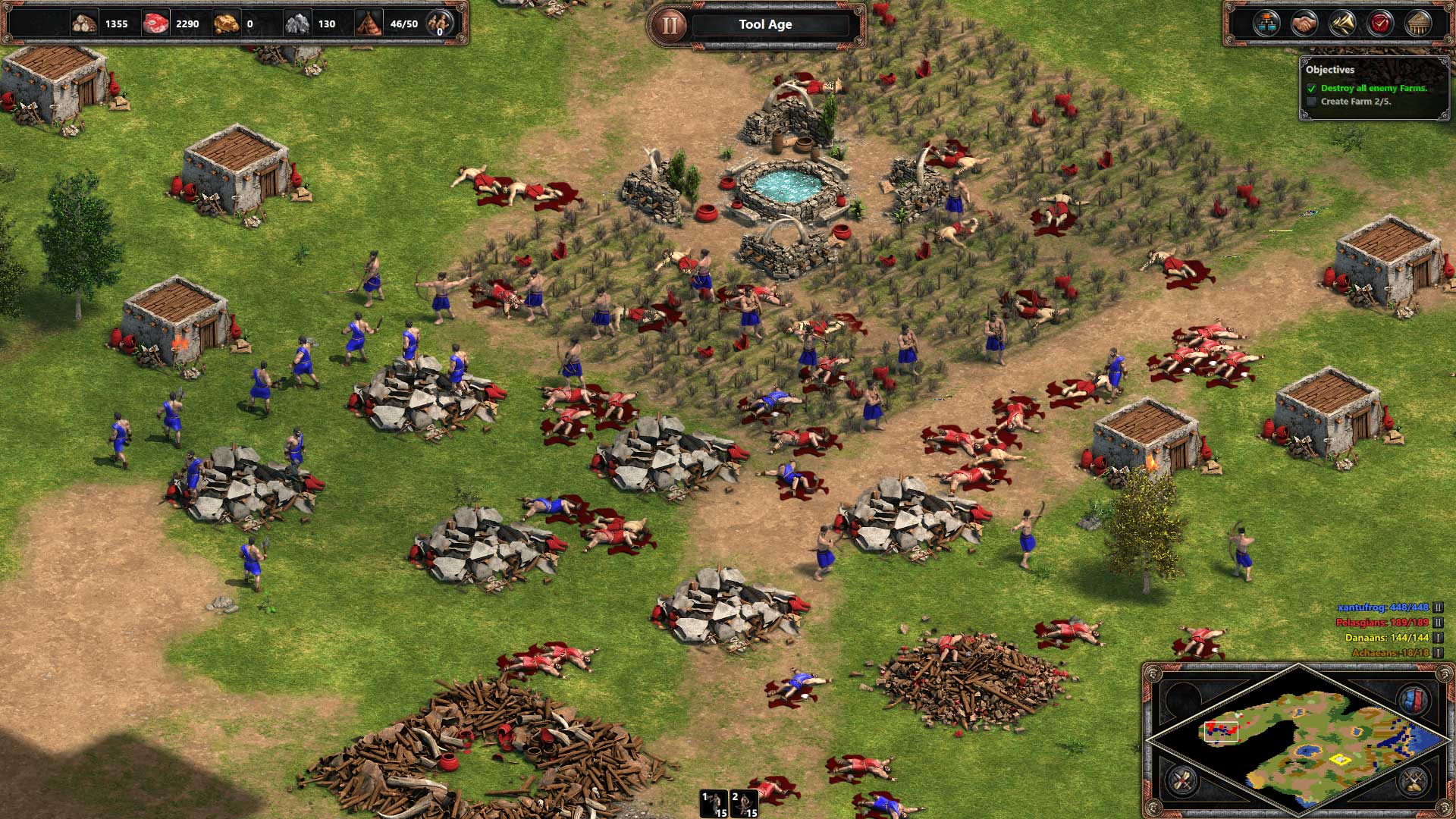 The game also now features achievements, which is fun, I guess. And functional multiplayer. 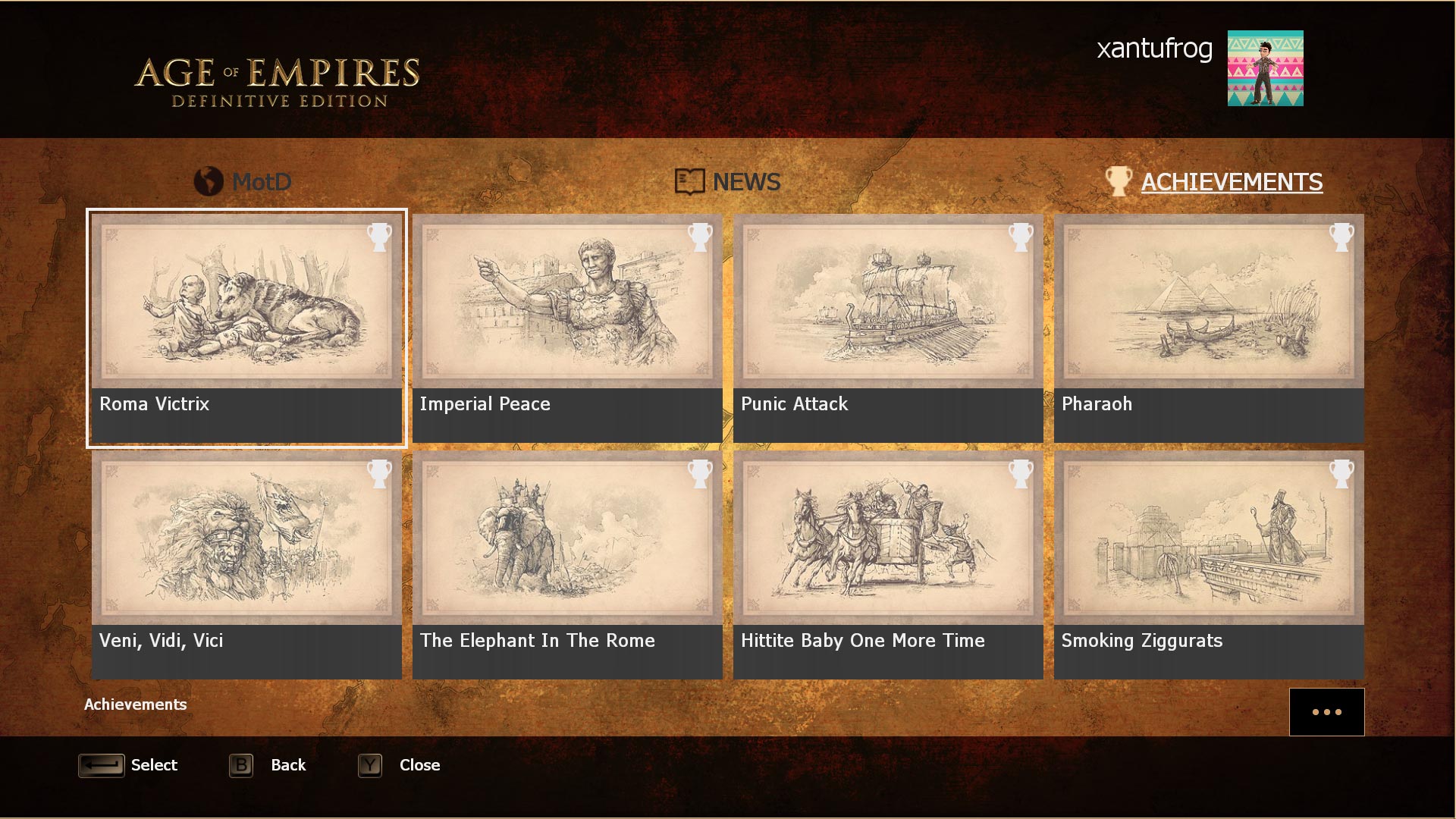 The sound score is also phenomenal. They took the classic music and created a new, full-throated, incredibly vibrant rendition that just thrums and pulses life into what you are witnessing on the screen. Well done in that regard.

The game features some new settings, as advertised, but here’s where my mood starts to sour on the game. Although I started this review with the stance that this actually looks great and offers a ton over the original release (which is true), much of what MS did feels a bit half-baked when you pull out the magnifying lens.

Let’s take a look at the Game Settings menu in all its glory. 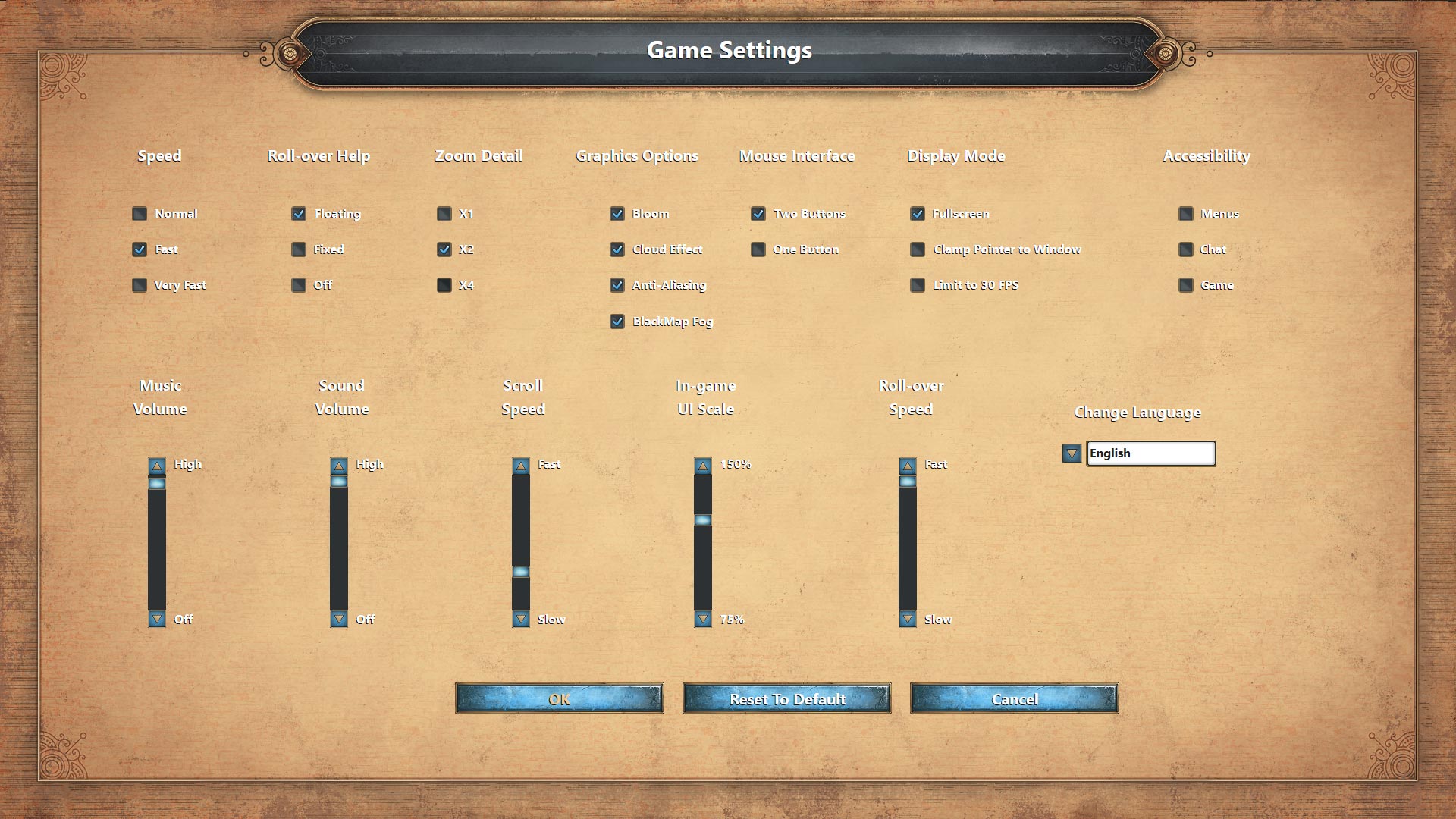 Notice anything missing? Well, for starters, you don’t get to choose your resolution. This is, frankly, weird. It fits squarely into Microsoft’s nanny-state mentality with the XBox gaming app for Windows 10, and it feels oddly out of touch with the amount of control that the vast majority of PC gamers have come to expect.

What they DO give you for performance customization are a few opaque, inter-twined settings. Specifically, rather than controlling your resolution, you can control the full-screen mode, set a 30fps cap (Whoa there, killer, don’t get too excited!), and you get to control the “UI Scale” and set three levels of pre-baked “zoom detail”. Combined, those options are your substitute for adjusting your resolution and performance of the game. This might sound “restrictive but not all that bad”, but here’s where things go off the rails:

The Zoom Detail setting sets the native visual rendering state for the game. In-game zoom,  the Zoom Detail is the fixed level of zoom with the maximum sharpness to the image, rendered at your (presumably always) native screen resolution. What this means is you only get three (THREE) pre-baked zoom levels that have good visual clarity.

Once you are in-game, you can zoom further in and out in a more granular manner using the scroll wheel, but Microsoft decided to treat the in-game zoom like they do the Windows desktop accessibility zoom feature – it doesn’t render the image at the native resolution at those zoom levels, and instead actually magnifies the pre-baked zoom level image. What THIS means is that any zoom state in between the three pre-baked levels is a blurry mess. It’s not unplayable, but it sure is noticeable, particularly when the game is in motion (see below). 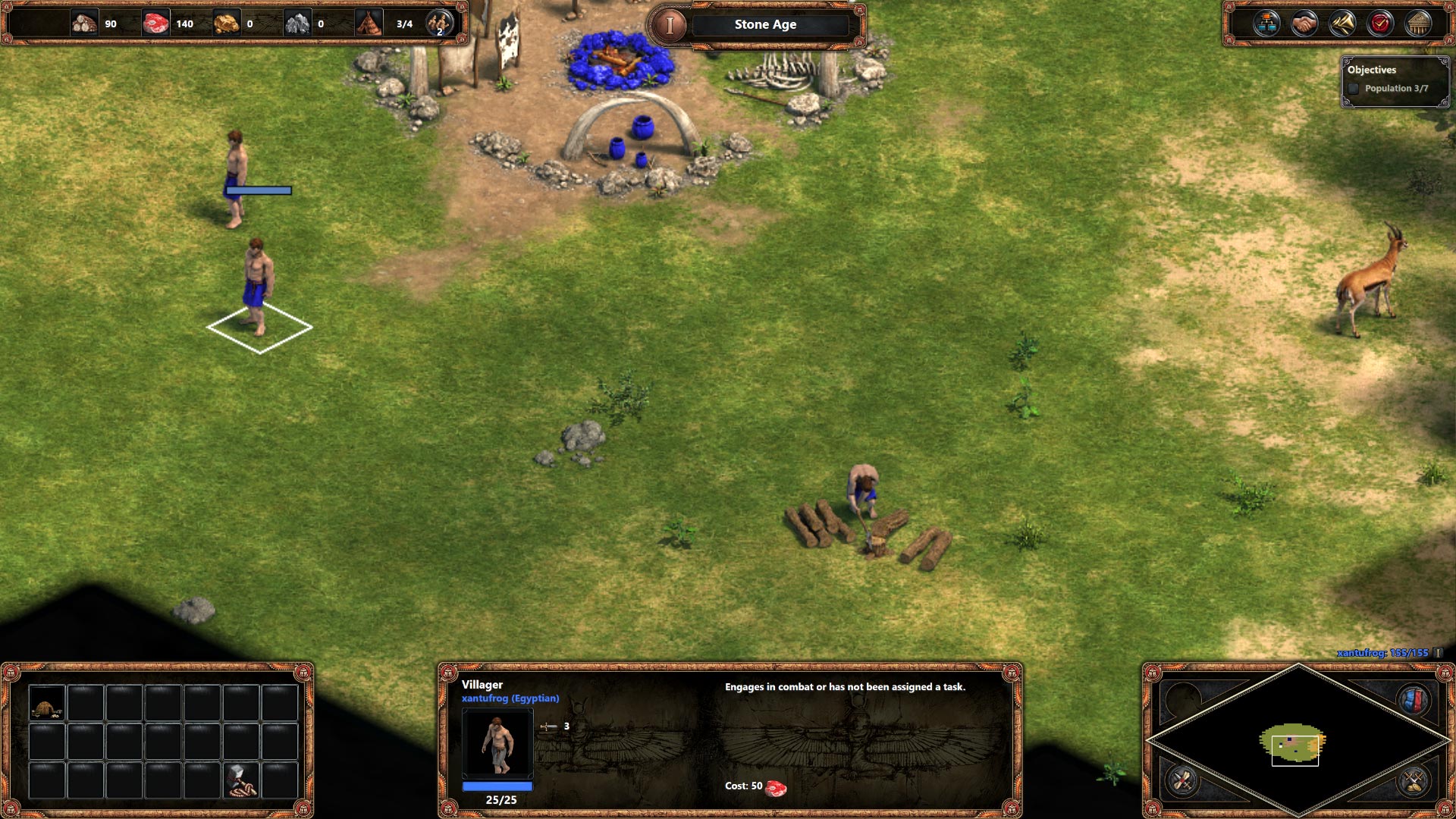 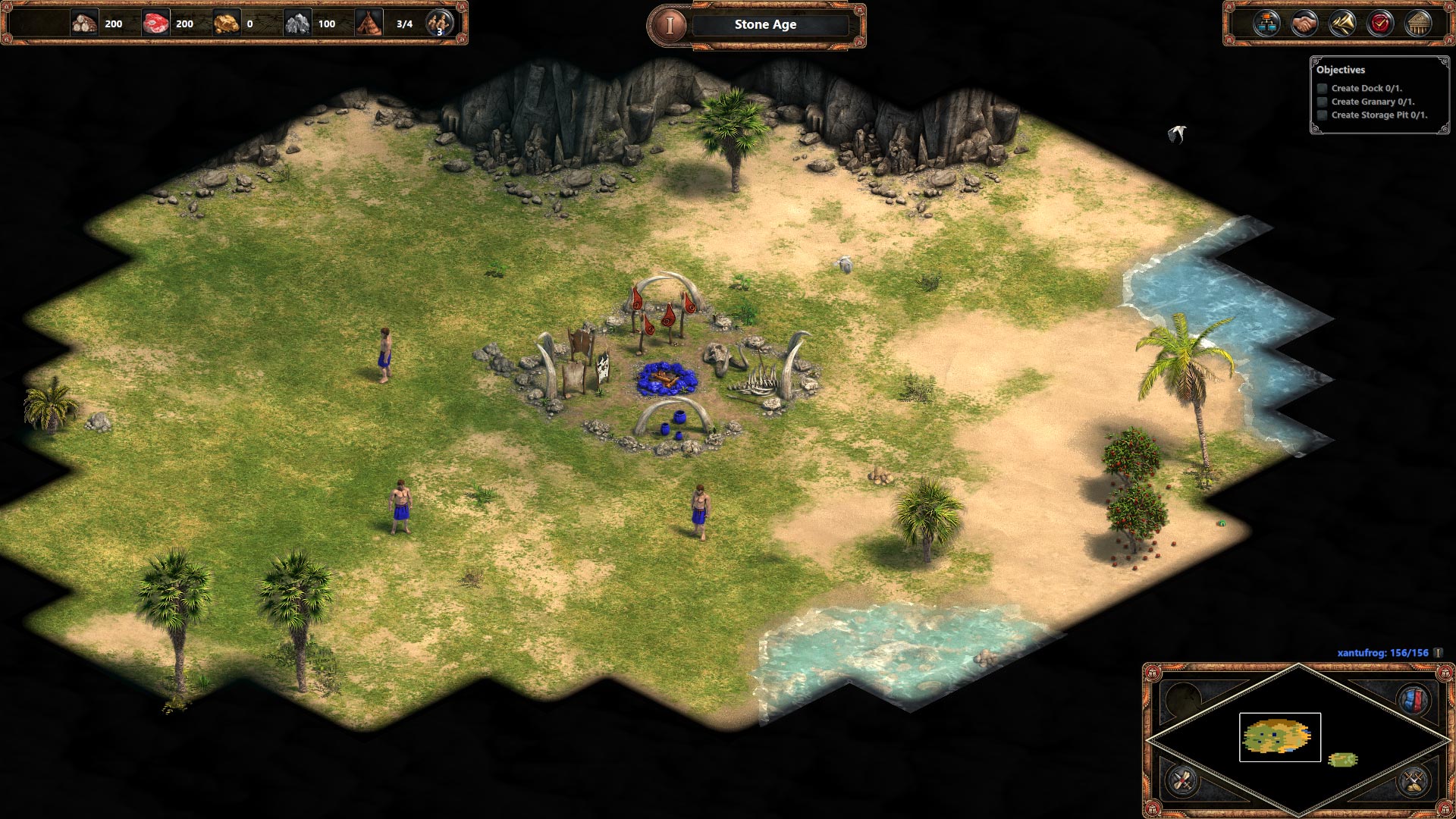 This is by far the most usable (2x).  When buildings get large and armies become expansive, it is too zoomed in, but it’s generally a good compromise at 1080p. 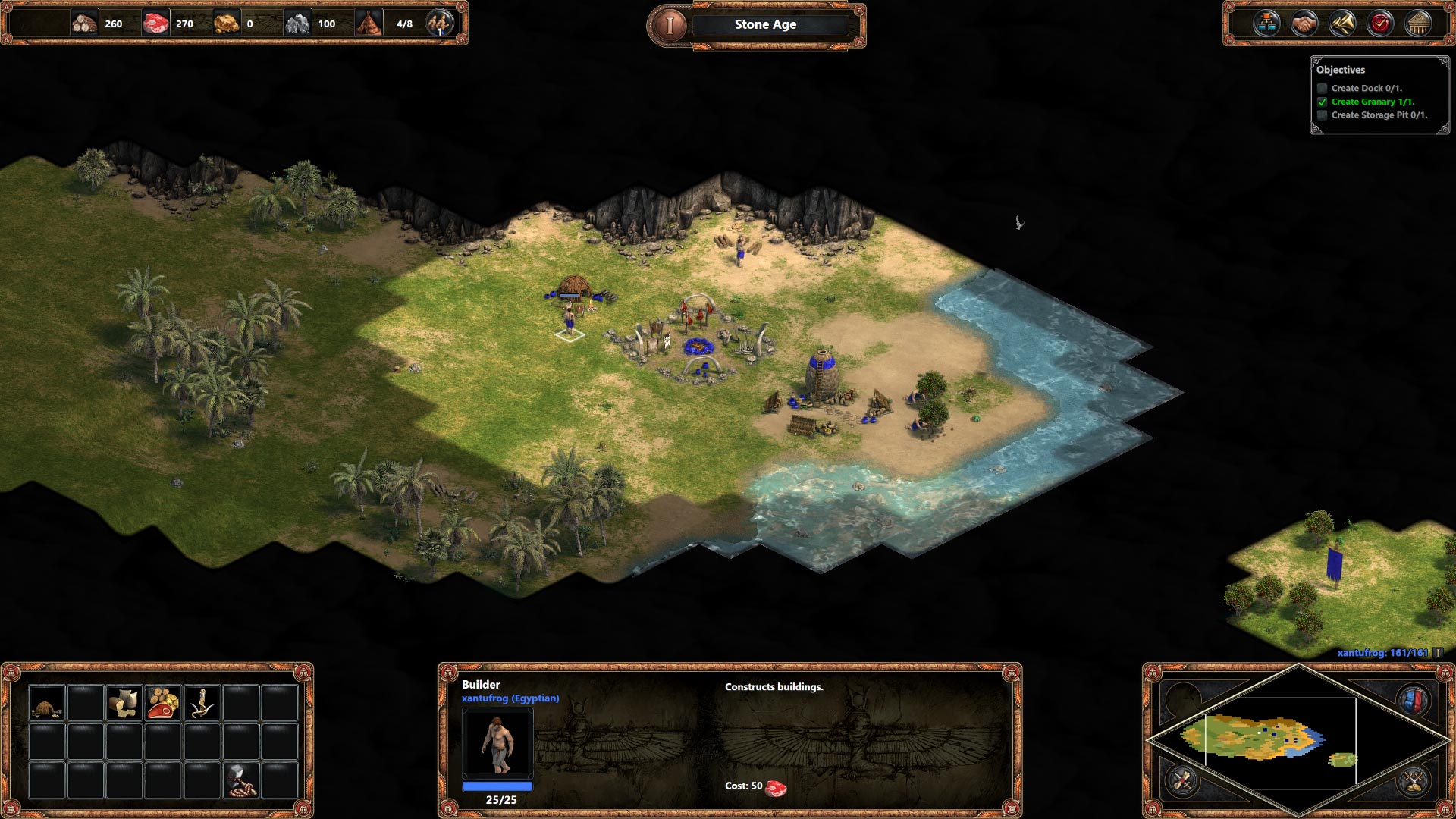 And this is the borderline mini-map zoom level (1x) – I shudder to think what this is like when the app forces 4K. 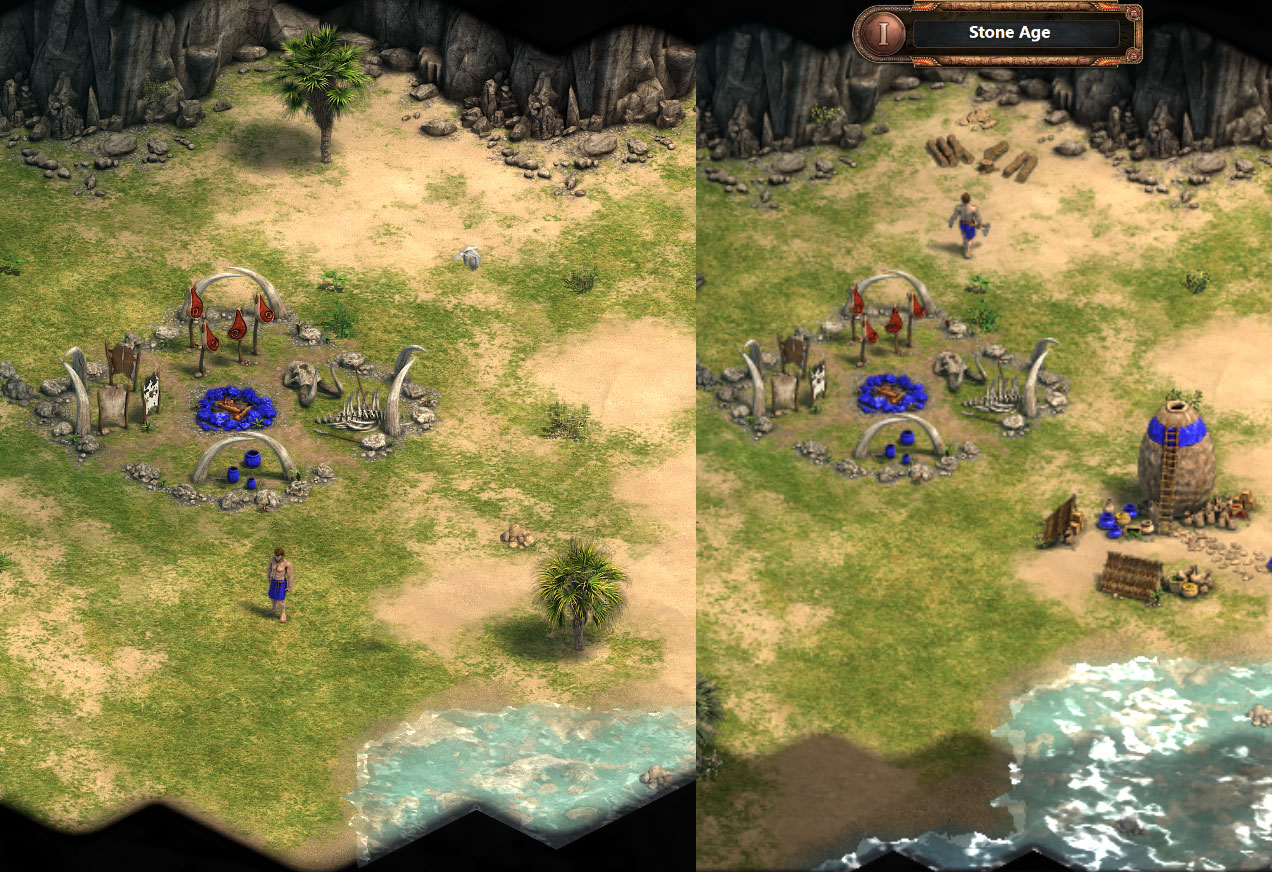 Again, this is a baffling example of Microsoft’s new “seamless-to-desktop” app design mentality. It’s a pretty half-assed (bad) solution for adding this functionality to the game. A single click on the scroll-wheel in either direction yields a noticeable blurring of the image. Note what happens in that last image if you try to replicate the (generally serviceable) 2x “Zoom Detail” by using in-game zoom from a pre-baked 1x.

The long and short of it is that the game has 3 actual levels of crisp, generally gorgeous zoom to choose from in the Game Settings menu. Unfortunately, only one of these is very useful for actually playing the game. And in the in-game zoom is pretty much a complete bust.

The buck doesn’t entirely stop there. Although the good souls remastering this opted to add a lot of quality of life features that at times seem borderline “remake”, there are odd omissions and inconsistencies in how well these changes play out.

For example: as mentioned above, pathfinding is better than the original but not great. Units often still fail to go where they are told. I argued above: “hey, it’s the original AOE, so what do you want?” and I stand by that – but this, in particular, may be the most dated aspect of the game, and given that the devs apparently took the time to go in and make some tweaks to improve it, one can’t help but ask: did they actually test it and say “yeah, good enough, let’s sell this beast”? Or were there critical flaws in the dated AI that couldn’t be overcome with post-hoc tweaks (which would be more excusable)?

Units fail to converge on a clicked destination once they’ve become spread out. This can mean that a unit at the other edge of the screen from his gang will stay that far away from them as you send them marching forward. This has the effect of forcing units to confront their pathfinding inabilities extra frequently, and prevents you from “threading the needle” with your combat units in order to traverse dangerous territory or sneak into the back of an enemy base for a surprise attack. That is, unless you manually move every individual goddam unit :-P

Units will frequently fail to auto-attack enemies nearby. Can’t count on the schlubbs for anything!

Priests appear to never auto-heal injured teammates, forcing you to manually assign them to individual unit healing chores in the thick of combat if you want them to do anything useful at all.

These types of issues are the most glaring failures to advance from the original, and in some cases actually appeared to be a critical downgrade from my copy of the initial release. In that case, in particular, these issues are inexcusable.

All told, the game is two steps forward, one step back. Visually, it’s 10 steps forward, but with some pretty huge asterisks. Mechanically, it’s substantially improved, and often comparable to AOEII HD in that regard. Unfortunately, there are some specific and notable cases where it doesn’t rise to to that level and can even feel inferior to the original game’s release.