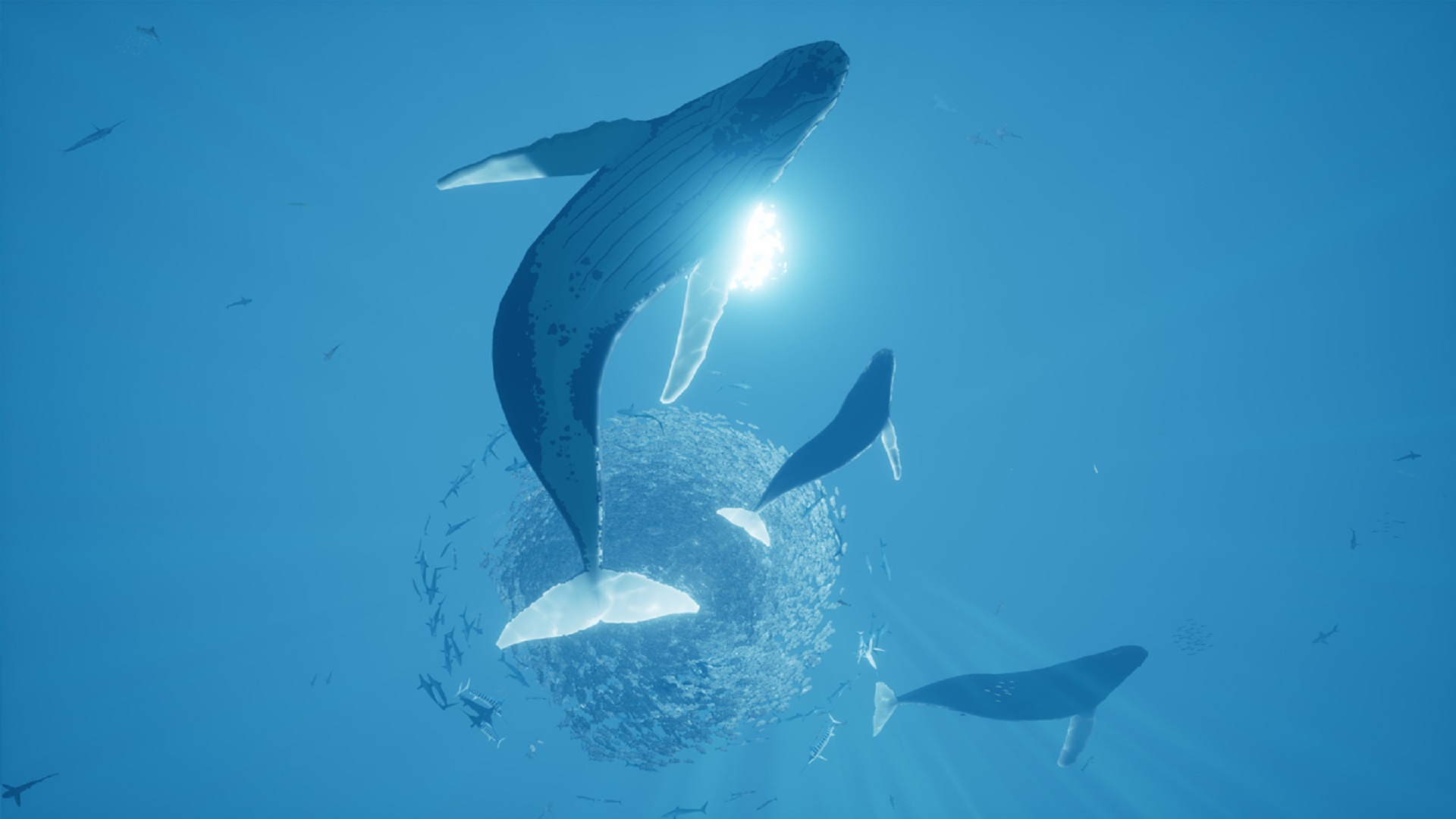 Abzu – a study in meditative aquatics

Abzû is a gorgeous, simple, and soothing adventure through the sea

Abzû is a difficult game to review. Part of the reason is that it is short, its mechanics are extremely simplistic, and its gameplay is linear… and yet, despite the aforementioned qualities, it is an extremely wonderful experience.

…if this is your type of game. I’ll nip things in the bud here: if you think Journey or Flower are an artsy-fartsy snooze, or the idea of snorkling or spending a day at the aquarium is painful, then you should not waste your money on this game. And I don’t say this to be condescending – some games are like popcorn and almost everyone can shovel them down with reasonable satisfaction. But other games are aimed squarely at a certain audience, and this is one of them.

Abzû is almost (but not quite) what could be dismissed as a “swimming simulator”. This is because of its simplicity, lack of overt narrative, lack of fail states, and – to be blunt – lack of challenge. And yet, many of us have been deeply moved by developers who have embraced the artistic side of gaming to deliver an experience that is aimed solely at relaxing us and putting smiles on our faces. And that is where Abzû shines.

Ahhh, another day with the kelp and the mantas

In Abzû, you are dropped into the middle of a sunny sea, and cued to dive beneath the surface and just swim. And swim you shall – through astonishingly gorgeous (if stylized) aquatic environments. The game is divided up into loose “levels”, which are largely distinguished by passing through environmental barriers into a new zone with new creatures. The game is largely linear, although within each zone you are inexorably drawn to explore every nook and cranny by A) the beauty of the environment, and B) subtle cues in the game (a turn of your avatar’s head, a current, a cluster of fish, etc). Such exploration is rewarded by finding pools of additional creatures to release into the local environment or occasionally a collectable. But, to be honest, the real reward is meditative. I have seen a lot of comparisons since the game’s release to Journey, but the truth is Abzû is its own fish. Abzû is more like a child of Flower and Journey, conceived while watching Finding Nemo and Fantasia. In some ways, the stronger links are with Flower, because although you control an avatar in Third Person like in Journey, the game leans heavily on a supremely relaxing ambiance. It even has a built in “Meditation” mechanic which allows you to sit and watch the flora and fauna in a given zone and to learn their names. The parallel with Flower also extends to the unspoken theme of restoring the life to the environment, which you perform by releasing animals from the pools that you discover and activating simple environmental puzzles. These actions flood the area with new colors and additional sea life.

The experience of swimming and jumping out of the water reaches deep inside to tickle the most basic joys that you experienced as a child when frolicking (yes, I said that) or when swooping your trail of rainbow-colored petals around a field in Flower.

The swimming mechanics in this game are extremely simple, and extremely well done. On PS4, all you do to swim is hold down R2. You can add speed by timed, subsequent hits of X, but that is it. While this sounds simple (and it is), I’ve never experienced such a fluid swimming experience in a game before. The fact that you can independently control your heading (left analog) and view (right analog) while swimming provides an intuitive way to interact and explore in three dimensions that is distinctly NOT frustrating. And this is critical for the experience of this game. To interact with parts of the environment, you *ping* your sonar when a triangle hovers above something… which effectively strips away mechanical difficulty in favor of allowing you to indicate that you are done taking in this area and are ready to move on.

This chain must lead somewhere…

The game does have a plot of sorts – like Journey, it wordlessly tells a tale about who you are, what is going on in the world, and ends in a glorious climax of colorful levity. Interestingly, there’s a surprisingly spunky sci-fi flavor to the tale. I really can’t say much of anything without spoiling what is there, but the game does build towards emotional highs and lows driven by some key changes in the setting. I think it doesn’t have the personal touch that Journey’s wordless tale did, and this makes some of the events – that were obviously intended to be momentous – fall flat. But there is an interesting and surprising direction that the game to takes – and I liked that.

As mentioned above, the game is beautiful. While stylized, the visuals are spot on for what the game is trying to do. Oh the colors… and the way the light ripples under water from the waves above… it is just so damn soothing and appealing. The animals are colorful and often cute, adding to the relaxing tone of the game. The best part about them is that you can ride some, and learn all of the species’ names. At the end of the game, you wind up with access to all of the “meditation zones” that you unlocked in your journey, and you can return to watch the animals swim in all of their glory. If I were to gripe about anything pertaining to the visuals, it would be the player avatar. While the unfolding story in the game partially explains your appearance, I just found the character design too cartoony and slightly incongruous with the aim of becoming immersed in the sea world around you. This is, however, a very minor point

The sound is also exceptional in the game. I feel like sound is often overlooked when considering the qualities of a game, but when the experience hinges so much on ambiance the developers needed to get this right. And they did. The music is subtle and complements the environments and events in the game perfectly, and the ambient sounds of the sea and the sea life are instrumental for drawing you in.

Lastly, I have to give a nod to the developers for their efforts to give the sea LIFE. It’s easy to put an animated fish in the water, but the animals in Abzû react to you and to each other in interesting, dynamic, and often realistic ways. Fish get eaten. Some hide or swim away when you get near. Some creatures don’t mind when you hitch a ride while others try their best to shake you off. Some animals follow you with interest when you swim extra fast. This game would be nothing without the environment being so dynamic and vibrant.

I did not encounter any bugs – the worst that I saw was occasional visual clipping.

Hopefully the limitations of this game are clear.

Probably the weakest point for me is the linearity – I would have liked some areas to be bigger, and possibly even a few branching paths that would enable you to replay the game by passing through a few new zones. As it stands, I can’t wait to replay the game someday soon, but knowing that I will retread the same waters to a pixel dampens the enthusiasm slightly.

There are some “tense” moments in the game, when you encounter hazards in the world. These are both a blessing and a curse, because while they provide contrast for the serene moments, they also hit you in the face with the fact that you are playing a game in which you cannot die and cannot lose. Is a danger real when it can’t actually affect your progress in any way?

I also found the little robotic companions that you pick up along the way to be obtrusive. They play an important role in the game’s progression mechanics (helping you to pass barriers into new sea zones), but they are noisy – which disrupts “the Zen” when their presence is are not immediately needed

I don’t want to belabor the “it’s not for everyone” point – but this is extremely true for games like this. Abzû is supremely relaxing, and at times surprisingly surprising and surprisingly engaging. The gameplay is absurdly simple, and yet perfect – mechanically almost without flaw and exactly what is needed (no more, no less) for the theme of the game. Some will criticize its length, but I have no idea how long it took me to play and I didn’t really care… it’s the type of game where you take as long as your meditative fascination with the environments dictates. If you are inclined to speed run through it or count the minutes… then you aren’t getting what you should out of this game. It’s a game for lovers of sea life, and people who work hard jobs and need to simply relax at the end of the day. Abzû is gorgeous, soothing, and tells an interesting story without ever speaking a word to you. I can’t wait for my next swim.