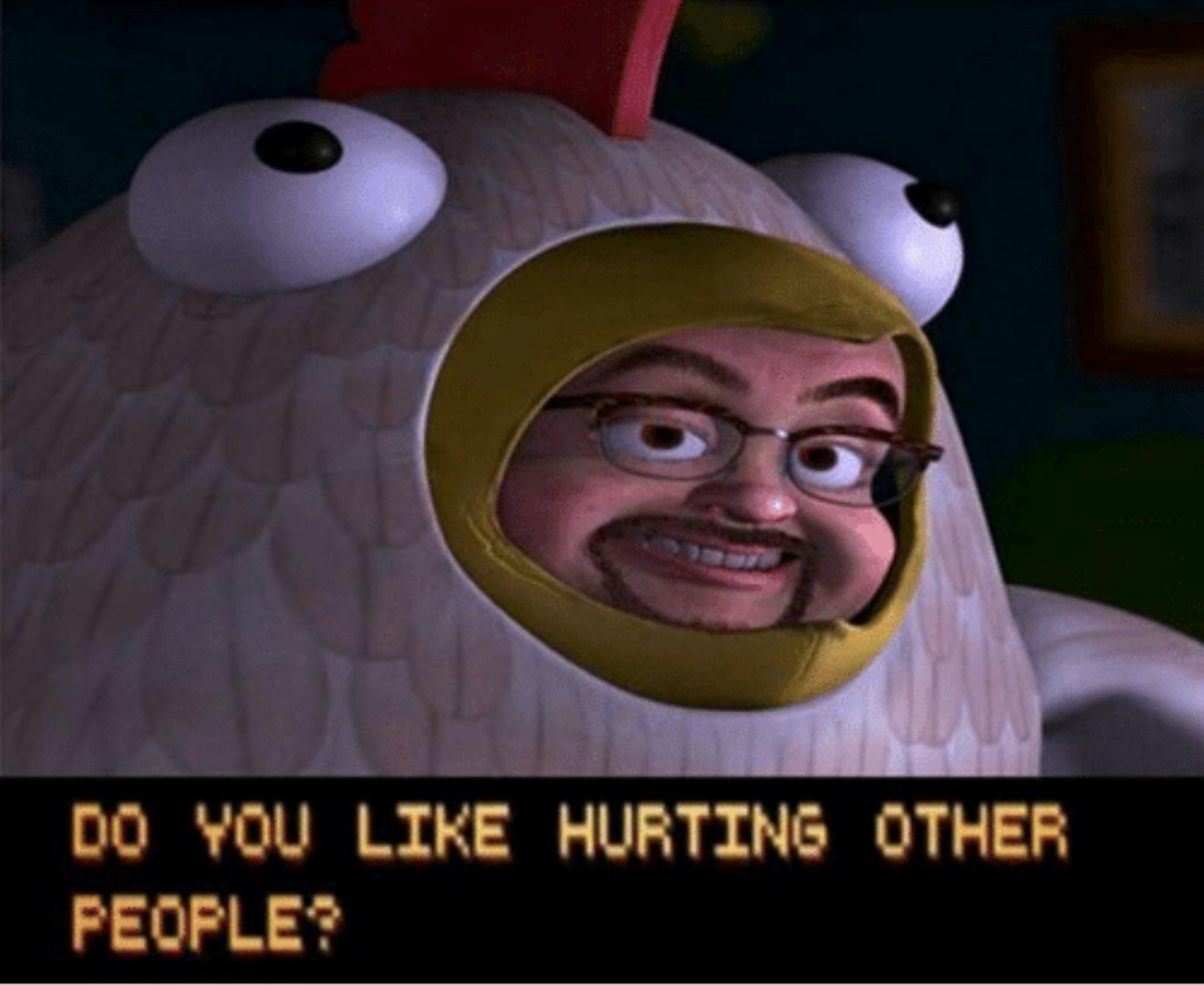 The first exposure I had to Hotline Miami was from PlagueOfGripes, a professional complainer on YouTube and Dark Souls enthusiast. Once he mentioned the fast pace, artistically beautiful essence that Hotline exuded, I was curious. Cut to me, wide eyed, smashing Biker’s head in with a golf club. Needless to say, I was hooked.

Hotline Miami takes you on a journey through an unnamed character’s increasingly surreal period where he receives strange voicemails telling him in vague messages to fix various “problems”. Most of his victims are Russian mafia, but even Jacket, the name given by fans due to his iconic letterman jacket, does not know why. He just knows to do it. Throughout the game, Jacket is visited by three masked figures: rooster masked Richard, aggressive owl Rasmus, and sympathetic horse masked Don Juan. Each of these three confront Jacket and cause him to question his actions, albeit too little too late. I won’t spoil the story, but it really is a doozy, involving Russian mafia, a bearded pizza guy/convenience store clerk/movie rental guy known as Beard, and a fuck-ton of cutlery. Seriously, go check it out. It has a 10/10 on Steam, if that means anything.

The Part About the Devs

The dev team behind this work of art/LSD trip is known as Dennaton Games, a mashup of programmer Jonatan Söderström and artist Dennis Wedin, though it was published by Devolver Digital, which is fine I guess. The story of their founding is actually a possibly hilarious: Jonatan (I’m just going to refer to him as his first name because I’m from Alabama), who previously developed games as a hobby in the Game Maker engine realized that he actually needed to make money off of video games in order to actually, you know, live. So he contacted a close friend, an artist named Dennis Wedin, and soon after they collaborated on Hotline Miami, their first game. Maybe that wasn’t hilarious, but I did say probably. The biggest influence on the game was director David Lynch. If you know anything about David Lynch, this should not surprise you; remember Eraserhead? Look it up. Another notable influence was the 2011 film Drive, which should not surprise you either.

The Part Where People Get Pissed

You may be wondering why I didn’t mention Hotline Miami 2. Well that’s because I only played it twice and don’t really feel like going through it again. I don’t have a problem with it, it was fine, but I just prefer the first. Though the second does clear a few things up, or makes them even foggier, I can’t tell. The ending is pretty interesting and I urge you to go play it. Especially since the Year of the Dog sale is going on on Steam, and both are 25% off. Their combined price is currently just under $7.

The Last Part, I Hope

Bit of a short article this week, but I have a doctor’s appointment and I’m sitting in a Starbucks right now. I know, I know, I hate myself too, but I like the Blonde Vanilla Latte.

Thanks for reading, and don’t look at the Silver Light. Okay, the formatting doesn’t work and I can’t add a subtitle without it straight up disappearing. Someone help.

We can explain some of the nuances of our site if you join us in our discord chat. https://discord.gg/TCVsAca

The subtitle is the 'summary' box found just below the editor, and the image should be 1920×1080. Come chat with us and we'll get this fixed up and moved to the proper section of the site.